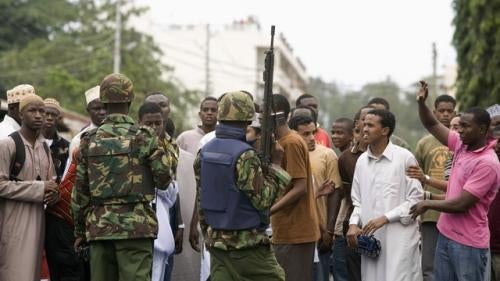 Kenya’s efforts to tackle a wide array of security threats have been marred by ongoing patterns of serious human rights violations by Kenyan security forces, including extrajudicial killings, arbitrary detentions, and torture. Despite evidence of these abuses, the government rarely investigates or prosecutes abusive security officers.

The government has been slow in implementing key reforms that were identified in 2008 as crucial to addressing Kenya’s political crisis , including land and accountability, and  security sector reforms. There has been no tangible progress on accountability for crimes committed during the post-elections violence of 2007-8, which left at least 1,100 dead and 650,000 displaced. President Uhuru Kenyatta, his deputy William Ruto, and journalist Joshua arap Sang faced charges at the International Criminal Court (ICC) for their role in the violence; in early December, the charges against President Uhuru Kenyatta were dropped, amid concerns over widespread intimidation of witnesses.

The government signaled its intention to introduce new restrictions on nongovernmental organizations (NGOs) and passed a law that increases the executive branch’s control over the police service. Human rights activists and civil society groups reported harassment and threats for their work on justice and accountability.

During the Usalama Watch operation in Nairobi and Mombasa in April, security officers from multiple agencies raided homes, buildings, and shops, carting away money, cell phones, and other goods. They harassed and detained thousands—including journalists, refugees, Kenyan citizens, and international aid workers—without charge, and in appalling conditions for periods well beyond the 24-hour legal limit.

Various police units have also been implicated in the torture, disappearance, and unlawful killing of alleged terrorism suspects and individuals of Somali origin, Somali refugees, and Muslims in Mombasa, Nairobi, North Eastern region, and other parts of the country.

In August, Human Rights Watch found evidence of at least 10 cases of extrajudicial killings of terrorism suspects by the Anti Terrorism Police Unit (ATPU). Some of the victims who were last seen in ATPU custody, had been threatened by the unit’s officers after being released by courts, or had received death threats from ATPU officers they recognized.

Suspects were shot dead in public places, abducted from vehicles and courtrooms, severely beaten during arrest, detained in isolated blocks, and denied contact with their families or access to lawyers. In some cases, members of the anti-riot forces known as the General Service Unit (GSU), military intelligence, and National Intelligence Service (NIS) were also implicated in abuses alongside the ATPU.

Kenyan police have been implicated in hundreds of extrajudicial killings over the past six years, but police have frequently failed to make a report to the Independent Police Oversight Authority (IPOA), a civilian oversight authority, a legal requirement that facilitates investigations.

IPOA has made some progress since it was founded three years ago: it charged a police officer in Nairobi in September for the extrajudicial killing of two brothers who allegedly engaged in criminal activities, and, in August 2014, successfully went to court to nullify a nationwide police recruitment exercise over widespread and systematic corruption.

Lack of Accountability
Accountability mechanisms introduced under the 2010 constitution remain weak and have not been adequately supported by the executive arm of government. For example, although the IPOA issued a public report about the Usalama Watch operation describing 29 complaints of police abuses, those responsible have not been disciplined or prosecuted.

Authorities have rarely investigated or prosecuted police officers, including members of the APTU, alleged to be responsible for killings. A spate of brutal gang attacks on villages in Bungoma and Busia counties in March 2013 left 10 people dead and over 100 seriously wounded. The violence, which marred the national elections and pointed to the government’s failure to dismantle criminal gangs often linked to political actors, has gone unpunished.

The response to major incidents such as the September 2013 attack on Nairobi’s upscale Westgate mall, which left 67 people dead, has been poor, with authorities failing to follow up on the promise to investigate security lapses and the botched security force response that saw officers from different agencies shooting at each other during the terrorist attack.

The government has made no progress regarding accountability for the post-election violence of 2007-2008. At time of writing, President Kenyatta, his deputy William Ruto, and former radio journalist Joshua arap Sang faced charges of crimes against humanity at the ICC  for their alleged roles in the violence.

While Ruto and Sang’s trial began in September 2013, Kenyatta’s trial has been postponed several times and had yet to start at time of writing, due to witness withdrawals and lack of cooperation from the Kenya government.

Treatment of Refugees
Following a series of grenade and gun attacks in Nairobi’s Eastleigh neighborhood and Mombasa in March that killed 12 people and injured 8 others, Kenyan police responded in April and May with widespread abuses, including round ups, torture, detentions of at least 4,000 people, extortion, deportations, and beatings of mainly ethnic Somali Kenyans and Somali refugees.

Kenyan authorities deported 359 Somali and other nationals, including at least three registered refugees, in April and May. The authorities did not allow United Nations or other independent organizations to monitor the screening process, carried out at Nairobi’s Kasarani stadium, or challenge deportations to conflict-ridden Somalia.

Detainees were beaten and held in appalling conditions. In Eastleigh’s Pangani station, hundreds of detainees were packed into cells designed for just 20 people. Detainees had no room to sit; cells were filthy with urine and excrement. Police also held detainees beyond the 24-hour limit proscribed under Kenyan law, without taking them to court.

The operation followed a March 2014 government directive ordering urban refugees to relocate to the overcrowded refugee camps. In July 2013, the High Court had ruled that an almost identical encampment order violated refugees’ freedom of movement and right to dignity as enshrined in the Kenyan constitution. But in June, the High Court upheld the reissued directive, and expressed no concern that it would violate these same fundamental rights and freedoms, although the factual situation remained the same.

Civil Society and Human Rights Defenders
Since early 2013, civil society groups advocating for justice for the victims of 2007-2008 post-election violence and victims of police extrajudicial killings have faced increasing pressure from government and security officials.

During their 2013 election campaign on the Jubilee party ticket, Kenyatta and Ruto accused civil society actors and human rights defenders of serving foreign interests by supporting the ICC. The Jubilee manifesto proposed restricting NGO funding from foreign sources, and the government has since introduced amendments to the Public Benefits Organizations (PBO) Act, 2013, seeking to increase government control over the public benefits authority.

Incidents of intimidation and harassment of NGOs, activists, and perceived witnesses for the ICC increased in 2014. In March, police stopped a meeting of a media NGO with Nakuru residents, arrested and detained the NGO officials and participants briefly, and questioned them on whether the meeting was about the ICC.

On November 24, 2013, the Uasin Gishu county deputy governor stopped a meeting in Eldoret convened by a peace and security NGO. In December 2013, one former and one current official of Muslims for Human Rights (MUHURI) received death threats following the release of the organization’s joint report with Open Society Justice Initiative on extrajudicial killing and disappearance of terrorism suspects by Kenyan security forces.

Sexual Orientation and Gender Identity
Existing Kenyan law criminalizes same-sex conduct with up to 14 years’ imprisonment. In the coastal county of Mombasa, the municipal by-laws provide further criminal sanctions against “homosexuality.” These criminal sanctions against same-sex conduct exacerbate abuses by police and other state agents, who subject LGBTI persons to harassment, extortion, arbitrary arrest and detention without charge or on trumped up charges, denial of services, sexual assault, and rape.

Although these laws are rarely enforced, Kenya’s LGBT community continue to experience intolerance and discrimination from members of the community, religious leaders, and politicians. In August, the Republican Liberty Party sought to introduce a law banning all forms of same-sex conduct with maximum sentences of life imprisonment and death by stoning for “homosexuality” and “aggravated homosexuality” respectively. The bill was before the Parliamentary Committee on Justice and Legal affairs for review pending tabling before the house for debate.

Key International Actors
Kenya’s relations with some European nations deteriorated in 2014, but Western governments have refrained from clear, public backing for accountability. In 2013, Kenyatta responded to Western criticism of Kenya’s lack of accountability by warming up to Russia and China. The Kenyatta administration improved trade ties with these two nations, and in late 2013, Kenya signed a loan agreement worth US$5 billion with China.

The Kenyatta adminsitration said Kenya would prioritize relations with African nations, following attempts to seek African Union’s (AU) backing for Kenya’s anti-ICC campaigns. In 2013, the AU passed a resolution calling for sitting heads of state to have immunity from prosecution before international courts, urging the Kenyan president not to appear before the ICC. In July 2014, the AU approved immunity for some senior officials in a newly adopted protocol to extend the jurisdiction of the African Court of Justice and Human Rights to trials of international crimes.