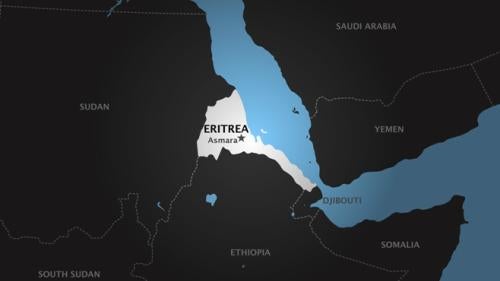 Eritrea’s dismal human rights situation, exacerbated by indefinite military conscription, is causing thousands of Eritreans to flee their country every month. In early 2014, President Isaias Afewerki confirmed his lack of interest in an open society, stating: “[I]f there is anyone who thinks there will be democracy or [a] multiparty system in this country ... then that person can think of such things in another world.”

The United Nations High Commissioner for Refugees (UNHCR) estimates that about 4,000 Eritreans flee the country each month and that as of mid-2014, more than 313,000 Eritrean –over 5 percent of the population–have fled. More than 5,000 crossed into Ethiopia in October alone. Many have experienced further abuses or death at the hands of traffickers en route to Israel and Europe, while thousands of others have been detained in Libya and Israel in deplorable conditions.

In June, the Human Rights Council condemned Eritrea’s “continued widespread and systematic violations of human rights and fundamental freedoms,” and adopted a resolution establishing a commission of inquiry to investigate abuses in the country. The most common patterns of abuse include open-ended military conscription; forced labor during conscription; arbitrary arrests, detentions, and disappearances; torture and other degrading treatment in detention; restrictions on freedoms of expression, conscience, and movement; and repression of religious freedom. Members of the Afar and Kunama ethnic groups flee because of land expropriations and discrimination by the government.

In September, Eritrea acceded to the United Nations Convention against Torture.

The threat of indefinite military conscription compels thousands of young Eritreans to flee their country. Among recent defections were 11 members of the national football team, including the coach, who fled while in Kenya in December 2013. The national football squad has lost almost 50 members in such defections over the past five years.

By law, each Eritrean is compelled to serve 18 months in national service starting at age 18 but in practice conscripts serve indefinitely, many for over a decade. One 14-year-old refugee said, “The military does not have an end, it is for life.” While most young Eritreans begin military training for the last year of high school, children as young as 15 are sometimes conscripted. Desertions and refusals to report became more common in 2014.

Conscripts receive inadequate pay to support family members, a financial plight exacerbated by food-price inflation in 2014. Conscripts are also subject to military discipline and are harshly treated throughout their long service. Perceived infractions result in incarceration and in physical abuse often amounting to torture. The length of incarceration and type of physical abuse inflicted is at the whim of military commanders and jailers. Female conscripts are frequently sexually abused by commanders.

While some conscripts work in civil service jobs at conscript pay, others are used as forced labor on construction sites and government-owned farms. The Eritrean construction industry is a government monopoly that uses forced conscript labor. In 2013, Human Rights Watch found that several hundred conscripts had been used by state-owned Segen Construction Co. to build infrastructure at the Bisha mine, Eritrea’s only operating mineral mine. Bisha is majority-owned by Nevsun Resources, a Canadian mining company. Nevsun has expressed “regret if certain employees of Segen were conscripts” during the mine’s construction, but insists there are no ongoing abuses. Segen remains a contractor at Bisha. Able-bodied men older than 50 have been forced to perform militia duty several times a week without pay since 2012. They are used as armed guards and as labor on public workprojects, prompting some to flee.

Arbitrary arrests are the norm. A prisoner may or may not be told the reason for the arrest; even prison authorities may not be informed. Detainees are held indefinitely; releases are as arbitrary as arrest, and few, if any, detainees are brought to trial. The most prominent political prisoners are 21 senior government officials and journalists arrested in September 2001 and held in solitary confinement ever since; defecting jailers claim that half have died in captivity. The then-15-year-old daughter of a government minister arrested immediately after her father defected in 2012 remains incarcerated.

Prisoners are held in vastly overcrowded underground cells or shipping containers, with no space to lie down, little or no light, oppressive heat or cold, and vermin. Food, water, and sanitation are inadequate, beatings and other physical abuse are common, deaths not unusual. Some of the leaders of an attempted 2013 takeover of the Ministry of Information died in prison in 2014, according to unconfirmed reports.

In May, the country’s Roman Catholic bishops released an unprecedented letter underlining their concern at “the prospect of a drastic depopulation of the country.” The letter highlighted forced “military service unlimited in terms of time and monetary reward” and “the imprisonment of many young people in actual prison or in punishment camps.” The bishops called on the government to “initiat[e] a political system that is clear, transparent and lawful,” to liberate “those who have been detained illegally, those forgotten in prison,” and to allow “open discussion of the problems of the country . . . [and] access to objective verifiable information.”

The bishops’ letter is a rare public criticism of the government from within the country. Since 2001, the government has tightly controlled access to information, permitting no independent media, labor unions, or nongovernmental associations to operate.

At least six government journalists arrested in 2009 and 2011 remain in solitary confinement without trial. Foreign broadcasts are sometimes jammed.

Internet access is available but few can afford private access, and Internet cafés are monitored, as are telephone calls.

The government severely harasses citizens who practice religions other than the four it recognizes–Sunni Islam and the Eritrean Orthodox, Roman Catholic, and Lutheran churches. Prayer meetings of unrecognized religions are disrupted and participants arrested. A condition for release is often a signed statement by the prisoner recanting their religious affiliation.

The government interferes with the practices even of the four religions it recognizes. The government appointed the Sunni imam in 1996, deposed the patriarch of the Eritrean Orthodox Church in 2005, and appointed his successor. The deposed patriarch remains under house arrest nine years later. In October, several monasteries denounced the government-appointed administrators of the church.

Eritreans fleeing their country have experienced horrific abuses. Since 2004, over 200,000 Eritreans have fled to remote border camps in eastern Sudan and Ethiopia, evading Eritrean border guards with shoot to kill orders against people leaving without permission. The lack of work prospects in or near the camps caused tens of thousands to pay smugglers to take them through Sinai to Israel. Egyptian traffickers have tortured scores of Eritreans for ransom in the Sinai Peninsula, including through rape, burning, and mutilation. Some victims said the Egyptian traffickers had tortured them to extort up to US$40,000 from their relatives.

Despite these atrocities, about 37,000 Eritreans had entered Israel by the time Israel all but sealed off its border with Egypt in December 2012. Since June 2012, Israeli authorities have indefinitely detained thousands of Eritreans for entering Israel irregularly and have applied coercive measures to “make their lives miserable” and “encourage the illegals to leave,” in the words of Israeli officials. Measures include indefinite detention, obstacles to accessing Israel’s asylum system, the rejection of 99.9 percent of Eritrean claims, ambiguous policies on being allowed to work, and severely restricted access to healthcare. In September 2014, the Israeli Supreme Court held the detention law to be unconstitutional and later ordered the release of some detainees.

President Isaias uses the lingering tension from the 1998-2000 border war with Ethiopia as an excuse for keeping the country on a permanent emergency military footing. Eritrea’s foreign policy of supporting Ethiopian, Somali, and other rebel groups has also led to its political isolation in the region. Eritrea fought a brief border skirmish with Djibouti in 2008, and Qatar has been trying to mediate this border dispute since 2011 without progress. Eritrea denies it holds 18 Djibouti prisoners of war even though three escaped in 2011.

The United Nations Security Council voted to retain an arms embargo on Eritrea and to renew the mandate of its Monitoring Group on Somalia and Eritrea for another year.

Foreign mining company projects in which the Eritrean government has 40-50 percent stakes provide it with significant foreign exchange. Nevsun, the Canadian owner of Bisha, estimates it will pay $14 billion to Eritrea over the next 10 years, according to the UN Monitoring Group. Another Canadian company, Sunridge Gold Corporation, announced it will begin gold and copper production in 2015. The largest extraction projectof potash salts in the Danakil Depression, by South Boulder Mines of Australia, remains in the pre-feasibility study stage.

Economic relations with China remain important. One Chinese firm, SFECO Group, reportedly received orders worth $340 million in 2014 for agricultural and industrial construction projects. The Chinese government in July agreed to fund part of a $33 million first-phase project to construct a college of science southwest of Asmara.

Canada threatened in 2014 to close the Eritrean consulate in Toronto unless it stopped collecting taxes from Eritrean-Canadians. A 2 percent tax on the income of émigrés remains an important but diminishing source of revenue for the government.