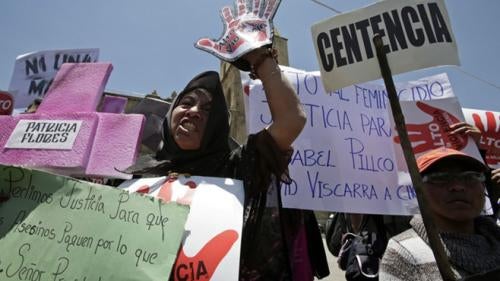 In October 2014, Evo Morales was reelected as president of Bolivia with 61 percent of the vote, and the ruling party won two-thirds of the seats in the Plurinational Assembly.

Threats to judicial independence and impunity for violent crime and human rights violations remain serious problems in Bolivia. Extensive and arbitrary use of pretrial detention and trial delays undermine defendants’ rights and contribute to prison overcrowding.

The administration of President Morales continued to target human rights defenders and critical journalists in 2014, and failed to fully respect the right to free, prior, and informed consent of indigenous groups. Violence against women, and child labor, are major concerns.

The Bolivian justice system has been plagued by corruption, delays, and political interference for years.The 2009 constitution provided for judicial elections to overhaul Bolivia’s highest courts, but the Plurinational Assembly selected candidates through a process that lacked transparency and did not adequately consider their qualifications.

In July 2014, the Plurinational Assembly had initiated an impeachment process, targeting three Constitutional Court magistrates under a 2010 law that allows the legislature to remove judges and impose criminal penalties on them, undermining judicial independence. As of November, the three magistrates had been suspended from office and at least one more was being investigated.

Bolivia has made little progress prosecuting human rights violations committed under authoritarian governments between 1964 and 1982, and has not adequately compensated victims of political violence. A contributing factor has been the unwillingness of the armed forces to provide information on the fate of people killed or disappeared during this period. A proposal to create a truth commission to investigate these crimes—made up of seven members, including four appointed by the government—was pending before the Plurinational Assembly at time of writing.

Efforts to bring to justice those allegedly responsible for killings during violent clashes in 2008 between supporters and opponents of President Morales have made little progress. As of September 2014, a La Paz court was still hearing evidence in a case involving Leopoldo Fernández, former prefect of Pando Department, and five local officials charged in 2008 for their roles in the killing of 13 people. Prosecutorial inefficiency has undermined victims’ right to justice and suspects’ due process rights.

The government has not reopened an investigation into the April 2009 killing of two Hungarians (one of Bolivian birth) and an Irishman, who the government alleged were mercenaries involved in a separatist plot. Police shot them dead after storming into their hotel rooms in Santa Cruz. Credible reports suggest that at least two of the three may have been extrajudicially executed. In October, the United Nations Working Group on Arbitrary Detention ruled that a Croatian-Bolivian citizen implicated in the case had been arbitrarly detained, and called on Bolivia to release him.

The government has yet to fully investigate the use of excessive force by police in 2011 to disperse a largely peaceful demonstration against a proposed highway in the Isiboro Secure National Park and Indigenous Territory (known as “TIPNIS”). The police gagged, stripped, and beat demonstrators, according to the Ombudsman’s Office.

The lack of access to justice has led to mob attacks (or “lynchings”) against citizens or police officers believed responsible for crimes. Ten people were reportedly killed in lynchings in 2013, and at least another eleven in 2014. Impunity for lynchings remains the norm.

Human rights violations against soldiers remain a problem. In May, a soldier who led a demonstration protesting for better working conditions for low ranking officials was charged with sedition and rebellion. In July, five soldiers were allegedly stripped, beaten, and subject to electric shocks by their superiors in response to the loss of a rifle.

The Constitutional Court ruled in 2012 that a civilian court should have jurisdiction in the case of a conscript who died in 2011 following a combat training exercise after instructors allegedly beat him on the head and chest. The court urged lawmakers to reform Bolivia’s military justice code to ensure that human rights violations are heard in civilian courts. As of November, the code had not been reformed.

Bolivia has one of the highest rates of unconvicted prisoners in the region (more than 80 percent, as of December 2013). Extended pretrial detention and trial delays have led to increased overcrowding and poor conditions in prisons, where food and medical attention are inadequate and internal control is often left to prisoners. As of February 2014, there were 14,700 inmates in prisons with a maximum capacity of 4,884, according to the Ombudsman’s Office.

In September, four people died and 11 were wounded during clashes amongst detainees in a maximum security prision in Cochabamba. According to the Ombudsman’s Office, penitentiary guards failed to oversee a party organized by inmates, and to assist victims after the violence.

Decrees adopted since 2012 allow the president to lower the sentences of detainees sentenced to less than eight years in prison, and to pardon those in pretrial detention for crimes with penalties of up to four years in prison. In August 2014, the director of the penitentiary system reportedly stated that 957 prisoners had been released.

Human rights defenders continue to operate in a hostile environment that undermines their ability to work independently.

In 2013, President Morales adopted a decree granting the government broad powers to dissolve civil society organizations. Under the decree, any government office may request the Ministry of Autonomy to revoke an organization’s permit to operate if it performs activities different from those listed in its statute, or if the organization’s representative is criminally sanctioned for carrying out activities that “undermine security or public order.” The Plurinational Assembly may also request that the permit be revoked in cases of “necessity or public interest.”

In December 2013, the government expelled the Danish nongovernmental organization IBIS, which had worked with and funded indigenous groups in Bolivia since 1984. The minister of the presidency stated that the government would not tolerate IBIS’s “political interference” in Bolivia, and threatened that “all nongovernmental organizations involved in political interference will be expelled.”

While public debate is robust, the Morales administration has repeatedly accused journalists of lies and politically motivated distortions. In April, the solicitor general brought a criminal case against two journalists from La Razón newspaper, accusing them of “espionage” and “revealing state secrets” for publishing an article on the government’s strategy in an international dispute regarding maritime borders with Chile. In August, the case was transferred to a specialized “press court” with powers to impose fines instead of criminal penalties.

A government-sponsored bill on access to information remained pending before the Plurinational Assembly at time of writing.

The 2009 Bolivian Constitution includes comprehensive guarantees to protect the rights of indigenous groups, including collective land titling, intercultural education, prior consultation on development projects, and protection of indigenous justice systems. A 2011 law establishing jurisdictional boundaries between indigenous and ordinary justice systems has yet to be fully put into practice.

The implementation of the right to prior, free, and informed consent, particularly with respect to extractive industry projects, remains pending. According to the UN Human Rights Committee, the development of a draft law on this topic has been accompanied by consultation but not adequate consent of indigenous communities.

Women and girls in Bolivia remain at high risk for gender-based violence, despite a 2013 law that provides for comprehensive measures to prevent and sanction violence against women. Implementation of the law, which created the crime of “femicide” and called for special prosecutors and courts for gender-based crimes and shelters for women, has moved very slowly.

In March, the UN Office in Bolivia stated that 154 cases of political violence against women in 2013 had not been brought to justice. The law defines “political violence” as actions or “physical, psychological, or sexual aggressions” against women who are candidates or hold public office, or against their families, undermining their work.

In November, the Bolivian police reported there had been 95 “femicides” in the country in 2014, opened a toll-free number to report such cases, and created a “group of immediate reaction” to address incoming reports of violence.

Women and girls face numerous obstacles to accessing reproductive health products and services, such as contraception and abortion after rape (one of the few circumstances when abortion is not penalized). According to Ipas, between 2008 and 2013, 775 women were criminally prosecuted for having an abortion, and thousands sought medical care for incomplete abortions. In February, the Constitutional Court ruled that obtaining prior judicial authorization and initiating a formal criminal investigation was not required to obtain access to legal abortion after rape.

In July 2014, the Plurinational Assembly adopted legislation, which the vice president signed into law, allowing children as young as 10 to work, violating international standards and making Bolivia the first country in the world to legalize employment at such a low age. According to the latest available official statistics from 2008, at least 746,000 children work in Bolivia.

Impunity for acts of violence and discrimination on grounds of sexual orientation or gender identity persists. In 2014, the Ombudsman’s Office reported that those responsible for the deaths of 55 LGBT persons since 2004 had not been brought to justice.

The 2009 constitution defines marriage as the union of a man and a woman. Several proposals to amend the constitution or legalize same-sex marriage or civil unions remained pending at time of writing.

Bolivia has supported a campaign by Ecuador to undermine the independence of the Inter-American Commission on Human Rights and limit the funding and effectiveness of its special rapporteurship on freedom of expression. President Morales announced in 2013 that he was “seriously considering withdrawing” from the commission, but Bolivia participated in hearings there in October 2014.

The International Labor Organization, which is reviewing Bolivia’s new legislation on child labor, stated in July 2014 that the law could violate several international treaties that Bolivia has ratified.