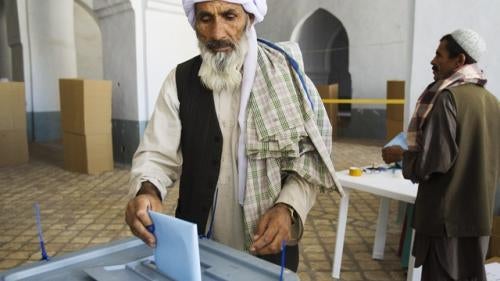 Afghanistan entered a new period of instability in 2014, with important implications for human rights. The June 2014 final round of the presidential election resulted in political impasse as both candidates, Ashraf Ghani and Abdullah Abdullah, claimed victory after accusing each other’s teams of engaging in fraud. On September 21, the two candidates signed a deal making Ghani the president, and Abdullah the chief executive. The bitterly fought campaign and months-long standoff raised fears of continuing instability, and lingering disagreements over the terms of the deal delayed the formation of a cabinet.

Uncertainty surrounding the political transition, along with growing pressure from Taliban insurgents, contributed to a decline in respect for human rights throughout the country, including impunity for abuses by security forces, threats to women’s rights and freedom of expression, and indiscriminate attacks that killed civilians.

Preparations for the withdrawal of international combat troops by the end of 2014 continued, with foreign troops largely departed or sequestered in their bases. As insurgent forces launched sustained attacks on a number of vital districts, Afghan security forces suffered increasingly higher casualties on the battlefield. However, civilians still bore the brunt of the violence. The United Nations recorded a 24 percent rise in civilian casualties in the first six months of 2014 compared to 2013, most due to insurgent attacks.

Election Violence and Attacks on Civilians

Early in the year, the Taliban stepped up attacks on officials and workers associated with the presidential elections, and targeted other civilians and foreigners. On January 17, a suicide attack on a Kabul restaurant, La Taverna, resulted in the deaths of 20 people, including 13 foreign nationals and 7 Afghans. The Taliban claimed responsibility, apparently targeting the restaurant because of its popularity with foreigners. On March 21, gunmen attacked the dining room of the high-security Serena Hotel in central Kabul, killing nine people, including Agence France Presse journalist Sardar Ahmad, his wife, and two of their children. A third child was wounded.

In a March 11 statement, the Taliban vowed to “use all force” to disrupt the vote, and to “target all workers, activists, callers, security apparatus, and offices.” Violent incidents in the period included kidnappings of election workers, and targeted attacks on campaign rallies, and candidates’ staff and offices. Taliban forces killed some 40 civilians in attacks during the election, injured at least 100, and severed fingers of 11 men in Herat who voted in the run-off poll on June 14.

Impunity for abuses by government security forces remained the norm. The police in Kandahar, in particular, were cited by the United Nations, human rights groups, and journalists in numerous reports of torture, summary executions, and forcible disappearances through 2014. The torture and death in custody of Hazrat Ali, a 23-year-old plumber, as reported in the New York Times, prompted Minister of Interior Umer Daudzai to promise an inquiry, but no results had been made public at time of writing.

Despite a 2013 government investigation into allegations of ill-treatment and torture, not a single member of the Afghan security forces was prosecuted during the year for such abuses. Kandahar police reportedly maintained at least four secret detention centers, to which the UN Assistance Mission to Afghanistan (UNAMA) and the International Committee of the Red Cross (ICRC), had no access.

A number of high-level police and army officials made statements that appeared to endorse a “take no prisoners” policy toward captured Taliban fighters, blaming government policy and corruption for the fact that released detainees were returning to the fight. In June, Kandahar police chief, Brigadier General Raziq, stated that his police had orders to kill all Taliban on the battlefield. Raziq later retracted that statement. Just before leaving office, President Karzai promoted Raziq to a three-star rank. Kunduz Police Chief Mustafa Mohseni echoed Raziq’s sentiment, stating that police had no option but to kill captured insurgents because they could not be effectively prosecuted in a corrupt judicial system. On August 23, Gen. Murad Ali Murad, commander of the Afghanistan National Army’s infantry also called for “giving no quarter” to captured insurgents in clear violation of international humanitarian law.

Since 2013, Afghan authorities released hundreds of detainees from the Bagram Detention Facility, including 65 who were freed in February over the objections of the United States military, which argued that the men continued to pose a threat. In August and September, the US released and repatriated 2 Yemenis and 14 Pakistanis from Bagram.

Police impunity in 2014 extended to other crimes against civilians: in April, Meena Intizar, a poet, claimed that she had fled Kandahar city after one of Raziq’s deputies, Abdul Wadood Sarhadi Jajo, threatened to rape and kill her and family members after she filed a complaint that Jajo’s forces raided her home and stole electronics, jewelry, and money. Jajo had been accused previously of sexual assault, but was never prosecuted. In May, he was killed in a suicide attack.

The Afghan Local Police (ALP)—a network of local defense forces established largely by the US military in cooperation with the Afghan government—continued to be responsible for serious human rights violations, including extrajudicial executions. During an offensive against the Taliban in August in Zhare district, Kandahar, an ALP unit under Brigadier General Raziq’s command reportedly captured and executed six Kuchi nomads it accused of working with the Taliban. In June, ALP members under Commander Abdullah summarily executed three villagers in Andar district following a clash with Taliban forces in the area. According to UNAMA, at time of writing there had been no accountability for the killings.

Women’s rights remained under threat in 2014. In January, a provision in Afghanistan's draft criminal procedure code became the latest in a series of attempts to roll back the already fragile legal protections for women and girls. As passed by parliament, article 26 of the draft code included "relatives of the accused," among a list of people who "cannot be questioned as witnesses" in criminal proceedings, thereby making successful prosecutions of those committing domestic violence extremely unlikely. In late February, President Hamid Karzai signed the law but amended article 26 by decree to state that relatives of the accused are permitted to testify voluntarily. It also allows compelled testimony from any "complainant or informant regarding the crime" and slightly narrows the definition of "relatives." However, the amended article still exempts many family members from being called as witnesses.

In June, the government rejected recommendations from UN member countries to abolish prosecution of women for so-called moral crimes. Other setbacks for women’s rights in 2014 included a continuing series of attacks on, threats toward, and assassinations of, high-profile women, including police women and activists, to which the government failed to respond with meaningful measures to protect women at risk. The implementation by law enforcement officials of Afghanistan’s landmark 2009 Law on the Elimination of Violence Against Women remained poor, with many cases of violence against women ignored or resolved through “mediation” that denied victims their day in court.

More positively, women’s rights activists through hard work and constant advocacy were able to inject some discussion of women’s rights into the election process. This included a successful effort by the Afghan Women’s Network (AWN) to obtain signatures from Ashraf Ghani and Abdullah Abdullah, after both survived the first election round, to commit to following 30 recommendations that support women’s rights. AWN and its member organizations planned to follow up with the new president to ensure his compliance.

Early in the year, the Afghanistan Independent Human Rights Commission presented President Karzai with a copy of its 800-page report mapping war crimes and crimes against humanity in Afghanistan since the Communist era. Completed in December 2011, the report would provide a foundation for future steps to prosecute those implicated in past abuses. President Karzai had rejected calls to release the report publicly. Although Ashraf Ghani had vowed before the election to release the report, at time of writing there was no planned release date.

The rights to freedom of expression and association of media and political parties, hailed as one of Afghanistan’s clear human rights successes since 2001, increasingly came under threat in 2014.

Two credible Afghan media organizations, Nai Supporting Open Media, and the Afghanistan Journalists’ Safety Committee, documented some 68 attacks on journalists in the first six months of 2014, compared to around 41 attacks in the same period in 2013. The groups attributed 63 percent of the attacks and threats to government officials and Afghan security forces, almost 12 percent to insurgent forces, and the remainder to other powerful figures or unidentified sources. The attacks included the killing of New York Times reporter Noor Ahmad Noori on January 23, 2014, by unidentified assailants in Helmand province. Foreign journalists were also victims of violence; on March 11, an unidentified guman shot dead Swedish journalist Nils Horner in Kabul, and on April 4, a policeman in Khost shot dead photojournalist Anja Niedringhaus and wounded Associated Press reporter Kathy Gannon while they were covering preparations for the country’s April 5 presidential election.

On May 23, WikiLeaks revealed that the US National Security Agency (NSA) conducted mass phone surveillance in Afghanistan on a scale far greater than the NSA’s controversial metadata collection program in the United States. According to WikiLeaks, since 2013, the NSA has been recording and storing almost all phone calls, including those made by Afghan journalists.

The intensified fighting displaced thousands of people throughout Afghanistan, particularly in Helmand and Kunduz provinces. The UN High Commissioner for Refugees (UNHCR) documented an increase of over 38,340 in the number of internally displaced people from January through September 2014, bringing the total to over 755,011. The main causes of displacement were armed conflict and diminished security.

Deteriorating security and growing fears for the future contributed to an increasing number of Afghans fleeing their homes for other countries, or choosing not to return home from overseas. The number of Afghans seeking safety outside the country also grew, with some making dangerous journeys from Afghanistan through the mountains into Iran toward Europe or by boat to Australia. The number of refugees returning to Afghanistan from neighboring countries has fallen in recent years, according to UNHCR.

Afghans arriving in other countries faced increasing hostility, including draconian policies in Australia diverting asylum seekers to third countries, and governmental proposals in European countries, including the United Kingdom and Norway, to deport unaccompanied Afghan children back to Afghanistan. The several million Afghans in Iran continued to face discrimination and abuses.

International fatigue with Afghanistan among countries that have contributed troops or significant amounts of aid post-2001—particularly the US, which has had the largest military and aid involvement—reduced political pressure on the Afghan government to respect human rights, particularly in the areas of security force abuses and women’s rights.

While many countries pledged to continue aid to Afghanistan, political engagement waned and donors scaled back most forms of assistance. In October, President Ghani signed the Bilateral Security Agreement (BSA) with the US, a key step in determining the scope of NATO’s military presence in Afghanistan post-2014.

The International Criminal Court, which since 2007 has been looking into allegations of serious international crimes in Afghanistan, expanded its preliminary analysis to include admissibility issues, including the efficacy of relevant national proceedings to address accountability.