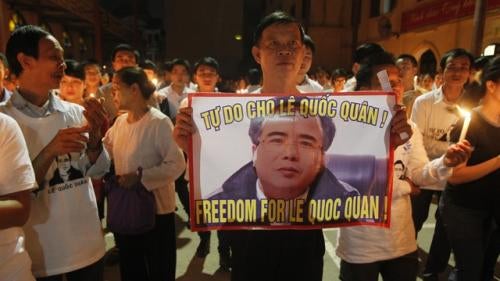 The human rights situation in Vietnam deteriorated significantly in 2013, worsening a trend evident for several years. The year was marked by a severe and intensifying crackdown on critics, including long prison terms for many peaceful activists whose “crime” was calling for political change.

The Communist Party of Vietnam (CPV) continued its one-party rule, in place since 1975. While it maintained its monopoly on state power, it faced growing public discontent with lack of basic freedoms. Denial of rights and endemic official corruption are widely seen as stifling Vietnam’s political and economic progress. Political infighting and economic policy disagreements within the CPV about how to handle the crisis of legitimacy and economic stagnation created an opening for members of the public to offer their opinions, particularly through social media.

The year saw a significant expansion of critical commentary in digital and other media. Critics questioned official policies, exposed official corruption, protested land-grabs, defended religious freedom, and called for democratic alternatives to one-party rule. One remarkable effort was “Petition 72,” originally signed by 72 intellectuals but later signed by some 15,000 people, calling for constitutional changes to allow multi-party elections. Another was “Statement 258,” calling for reform of article 258 of the penal code (“abusing democratic freedoms”), a provision often used to punish freedom of speech.

The government took some positive steps. On November 7, 2013, Vietnam signed the UN Convention Against Torture. On September 24, 2013, it issued a decree ending administrative sanctions for same-sex wedding ceremonies, although government sponsored amendments to the Marriage and Family Law did not grant legal recognition to same-sex marriage. The government also began phasing out detention and forced rehabilitation of sex workers in 2013.

Vietnam had an estimated 150-200 political prisoners at time of writing, including lowland Vietnamese and upland ethnic minority prisoners, some of whom were detained at least in part in connection with their religious activities. The total included at least 63 political prisoners convicted by politically controlled courts in 2013, an increase over the roughly 40 sentenced in 2012, which in turn exceeded the numbers sentenced in 2011 and 2010.

Vietnamese courts lack the independence and impartiality required by international law. Where the party or government has an interest in the outcome of a case, they—not the facts and the law—dictate the outcome. Trials are often marred by procedural and other irregularities that go along with achieving a politically pre-determined outcome.

The penal code provisions used most often against proponents of peaceful political change are articles 79, 87, 88, 89, 91, and 258, though other laws, such as tax laws, are also used. For example, prominent human rights lawyer and blogger Le Quoc Quan was arrested on December 27, 2012, shortly after he criticized the Communist Party’s political monopoly, but his arrest was justified by trumped up charges of tax evasion. Following domestic and international calls for him to be released, his trial was delayed but on October 2, 2013, he was sentenced to 30 months’ imprisonment.

Freedom of Expression, Opinion, and Information

The 2013 persecution of bloggers was highlighted by the arrests of Truong Duy Nhat and Pham Viet Dao for allegedly violating article 258. They face up to seven years in prison if convicted.

Vietnam bans all political parties, labor unions, and human rights organizations independent of the government or CPV. The authorities require official approval for public gatherings and refuse to grant permission for meetings, marches, or protests they deem politically or otherwise unacceptable. If such events go ahead, organizers and participants are sometimes punished. In 2013, such measures were applied to individuals who questioned government domestic and foreign policies and to individuals who demonstrated against alleged land-grabs.

In May 2013, authorities in three Vietnamese cities intervened with violence, temporary arrests, and concerted harassment to prevent and break up peaceful “human rights picnics” at which activists planned to disseminate and discuss the Universal Declaration of Human Rights and other human rights standards.

In January 2013, the prime minister put Decree 92 into effect, further extending controls on religious groups. In its enforcement actions, the government monitors, harasses, and sometimes violently cracks down on religious groups that operate outside of official, government-registered and government-controlled religious institutions. Targets in 2013 included unrecognized branches of the Cao Dai church, the Hoa Hao Buddhist church, independent Protestant and Catholic house churches in the central highlands and elsewhere, Khmer Krom Buddhist temples, and the Unified Buddhist Church of Vietnam.

The January 2013 conviction and imprisonment of 14 mostly Catholic activists by the People’s Court of Nghe An province initiated the year’s upsurge of government attacks on critics. The vehicle this time was article 79 of the penal code, prohibiting activities aimed at “overthrowing the government,” even though the 14 activists were exercising fundamental human rights, such as participating in volunteer church activities and peaceful political protests.

Official media and other sources continue to report many cases of police abuse, torture, or even killing of detainees. In May 2013, Nguyen Van Duc died in the custody of Vinh Long province police due to “brain bleeding with cracks on his skull, crushed right brain, blood-clotted left brain, two broken ribs, and broken sternum.” Human Rights Watch is unaware of any investigation into his death.

Many political prisoners suffer from poor health but do not receive adequate medical attention. Several, such as Cu Huy Ha Vu, Nguyen Van Hai (Dieu Cay), and Ho Thi Bich Khuong, went on hunger strikes in 2013 to protest denial of their internationally recognized prisoner’s rights, such as adequate medical care.

On November 28, 2013, the National Assembly adopted an amended constitution, the provisions of which disappointed those hoping for significant reforms to the political and economic system. Government-proposed amendments that were approved include rhetorical commitments to human rights, but they leave serious loopholes in place. The amended constitution falls far short of ensuring effective promotion and protection of many fundamental rights.

People dependent on drugs, including children, continued to be held in government detention centers where they are forced to perform menial work in the name of “labor therapy.” Their detention is not subject to judicial oversight. Violations of the rules—including the work requirement—are punished by beatings and confinement to disciplinary rooms, where detainees told us they were deprived of food and water.

Vietnam’s most important foreign relations are with China and the United States, but linkages with Japan, the European Union, the Association of Southeast Asian Nations, and Australia are also significant.

Vietnam’s relationship with China was complicated in 2013 by maritime territorial disputes, though perhaps more important for both was the shared commitment by each country’s communist parties to maintain their rule.

The United States continued to pursue improved military and economic relations with Vietnam, although an American ban on the sale of lethal military equipment remained in place in 2013. The US made some efforts to press Vietnam to improve its human rights record, but the issue was not prominent in meetings between President Barack Obama and President Truong Tan San in July. The EU made only tepid efforts on promoting respect for rights, while Japan remained silent and failed to use its status as Vietnam’s largest bilateral donor to publicly press for reforms.

The EU and Vietnam continued negotiations on a Free Trade Agreement and a third round of their annual human rights dialogue took place in September 2013. In April 2013, the European Parliament adopted a resolution condemning continuing human rights violations in Vietnam and called on the EU to raise concerns with Vietnamese authorities. While high level EU officials, such as EU High Representative Catherine Ashton were silent, the EU delegation to Vietnam issued public statements expressing concern over the crackdown on dissidents, the resumption of execution as a criminal penalty, and the cyber restrictions of Decree 72.