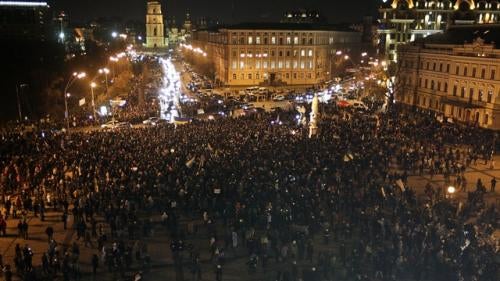 In 2013, Ukraine derailed its long-standing ambition of deeper political and economic integration with the European Union by suspending signature of the EU-Ukraine Association Agreement, including a Deep and Comprehensive Free Trade Area that it had initialed in March 2012. The government’s unexpected decision to suspend signing the agreement sparked large and mostly peaceful protests in Kiev and other major cities. The protests grew after the authorities used excessive force to disperse protesters, injuring dozens, and arrested several activists for allegedly “rioting.”

Parliament considered homophobic bills aimed at criminalizing the “promotion” of homosexuality among children and failed to revise the labor code to include lesbian, gay, bisexual, and transgender (LGBT) people as a protected category. Although activists participated in an LGBT equality march in May, attacks on LGBT groups and individuals remain a serious concern. There were many more attacks on journalists than in 2012. President Viktor Yanukovich pardoned several politicians imprisoned on politically motivated charges, yet former Prime Minister Yulia Tymoshenko and several others remain in prison. Ukraine’s asylum system remains flawed. The government took important steps to improve access to palliative care, but has yet to implement new regulations or expand access to opiate substitution treatment for drug users.

In a September report on its 2012 visit to Ukraine, the Council of Europe’s Committee for the Prevention of Torture confirmed Tymoshenko’s allegations of use of excessive force during her April 2012 hospital transfer.

In November, police briefly detained Tymoshenko’s lawyer Serhiy Vlasenko on domestic violence charges. Vlasenko was later released on bail. Ten days later, parliament failed to pass a bill that would allow Tymoshenko to receive medical treatment in Germany, which she has requested out of concerns for her safety in Ukrainian medical institutions.

In April, President Yanukovych pardoned several former officials from Tymoshenko’s government, including former Minister of Internal Affairs Yuri Lutsenko, imprisoned in 2010 on charges of embezzlement and abuse of office. Lutsenko is barred from running for public office for at least four years, until his conviction is expunged.

In March, Ukraine issued an extradition request for Viktor Romanyuk, a candidate for the Batkovchina opposition party in the October 2012 parliamentary elections, on allegations of attempting to steal state property in 2008. Italian authorities arrested Romanyuk in March, but refused to extradite him, after a court found no grounds to support a criminal prosecution. Romanyuk led in his district when results in several districts were annulled at the request of a candidate for the pro-government Party of Regions. The case against Romanyuk appears aimed at preventing him from returning to campaign in repeat elections yet to be scheduled.

Ukraine’s asylum system remains deeply flawed. Despite 2011 changes to the refugee law, asylum seekers often encounter barriers in accessing asylum procedures, face prolonged periods of administrative detention, and have difficulty challenging their detention or appealing expulsion decisions by the courts. Ukraine’s refugee recognition rates continue to decline. Because of flaws in the asylum system, there is no effective protection against refoulement, although there were no known new cases in 2013.

In February, Kyiv airport officials detained former Prime Minister of Tajikistan Abdoumalik Abdoulladjanov, as he arrived from the United States, where he has refugee status, in response to a politically motivated extradition request by Tajikistan, in violation of domestic law. Following an outcry from human rights groups and international organizations, authorities denied the extradition request and released Abdoulladjanov in April.

Ukrainian authorities failed to properly investigate the refoulement of a Russian political activist, Leonid Razvozzhayev, who went missing in October 2012 while in the process of applying for asylum in Ukraine andreappeared several days later in custody in Russia. The activist alleged mistreatment by the Russian authorities upon his forcible return to Russia, including being held in incommunicado detention and forced to sign a confession under duress.

The government took important steps to improve care for tens of thousands of patients suffering from severe pain, by approving local production of oral morphine and adopting new drug control regulations that significantly simplify prescription of strong pain medications. As of September 2013, however, the Ministry of Health had not operationalized the new norms, limiting patients’ access to essential medications. The expansion of treatment for dependence on opium-based drugs slowedconsiderably. Just 7,500 patients were receiving opiate substitution treatment in 2013, far short of the 20,000 approved in the National HIV/AIDS Program. Opiate substitution treatment remains unavailable in prisons, which hold many injecting drug users.

Two homophobic bills pending in parliament propose heavy fines or a prison sentence of up to six years for the production, publication, or distribution of materials aimed at the “promotion” of homosexuality among children. In February, the Cabinet of Ministers proposed amendments to the Labor Code introducing sexual orientation as protected grounds against discrimination, but parliament twice postponed consideration of the amendments. The EU requires Ukraine to adopt comprehensive anti-discrimination legislation for completion of the EU-Ukraine visa liberalization process.

Neo-Nazi and nationalist groups led a campaign through social networks and organized rallies in different regions threatening violenceagainst LGBT people and calling for cancellation of the May Pride Equality March. After a Kyiv court banned all public events in the city center for the day of the march, it was held on the outskirts of Kyiv with a heavy police presence protecting march participants from counter-protestors. Police investigations into online threats against LGBT activists had no results.

Several LGBT activists were attacked. In May, members of the ultra-right Svoboda political party threw sour cream at LGBT activist Olena Shevchenko outside a club in Kyiv. Shevchenko filed a complaint with police but has received no response. Also in May, unidentified assailants attacked an LGBT activist in Mykolayiv, in southern Ukraine, punching, kicking and shouting homophobic slurs at him. The police opened an investigation into the attack, which is ongoing.

Thirty-five journalists were attacked in the first six months of 2013, more than twice as many as during the same period in 2012. Two journalists covering a May opposition rally in Kyiv suffered multiple injuries after a group of nationalist youth severely beat them. Police reportedly stood by without intervening. In September, a court handed suspended sentences to three of the attackers for hooliganism and obstructing journalists’ work.

In July, unknown attackers assaulted journalist Sergei Ostapenko outside his apartment in Lugansk, resulting in multiple bruises. Also in July, two men beat Oleg Bogdanov, a journalist from an online outlet, “Road Control,” near his home in Donetsk, breaking his nose and jaw. Both journalists had reported on police corruption. Criminal investigations into both cases are ongoing, but have produced no results.

In January, following a closed trial, a Kyiv court sentenced Oleksy Pukach, former chief of the Interior Ministry's Criminal Investigations Directorate, to life in prison for the premeditated murder in 2000 of outspoken journalist Georgi Gongadze. In 2005, a court sentenced three former policemen for carrying out the murder. Despite Pukach’s testimony implicating several senior government officials, including former Ukrainian President Leonid Kuchma, with giving the order to murder Gongadze, no one else has been charged.

In July, a district court ordered that 70-year-old Raisa Radchenko from Zaporizhzhya, who publicized corruption and police abuse, be placed in a psychiatric facility, alleging that her behavior “posed a threat to society.” Doctors diagnosed Radchenko, who had no history of mental illness, with a personality disorder and paranoia and forcibly gave her strong sedatives. Officials denied Radchenko access to her lawyer in police custody and in the psychiatric facility. Radchenko was released after two weeks, following an outcry by human rights groups and the Ukrainian human rights ombudsperson.

Throughout the year, the EU consistently urged Ukraine’s authorities to fulfill the human rights criteria the EU had set out in order to enable signature of the EU-Ukraine Association Agreement at the November 2013 Eastern Partnership summit. These included tangible progress on: ending politically motivated prosecutions; fair and transparent elections; and judiciary reform. In a sudden move, one week before the summit, the Ukrainian government announced its decision to halt the association agreement with the EU, citing among other reasons the need to “restore trade volumes” with Russia.

Earlier in the year, Russia exerted pressure on Ukraine, stating that the EU Association Agreement, including the Deep and Comprehensive Free Trade Area, would harm relations with Moscow and preclude Ukraine’s participation in a regional Russia-led Customs Union. In August, Russia imposed stricter customs controls on goods from Ukraine and threatened to cut the gas supply and permanently tighten customs procedures should Ukraine sign the agreement with the EU. In September, EU Commissioner for Enlargement and European Neighbourhood Policy Štefan Füle called Russian pressure unacceptable. EU High Representative Catherine Ashton called the Ukrainian government’s decision not to sign the Association Agreement with the EU “a disappointment not just for the EU but also for the people of Ukraine.”

In July, the Representative on Freedom of the Media from the Organization for Security and Co-operation in Europe condemned attacks on journalists in Ukraine and called on the authorities to ensure journalists’ safety.