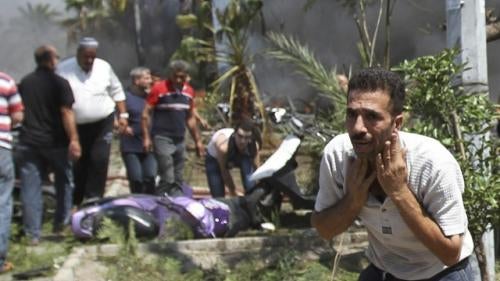 The security situation in Lebanon deteriorated in 2013 with violence spilling over from the armed conflict in Syria. Sectarian tensions led to deadly clashes in Tripoli and Saida amidst a climate of impunity for gunmen. Syrian refugees registering in Lebanon topped 816,000 in November, and with limited international support, the Lebanese government struggled to meet the refugees’ needs. The prime minister resigned in early 2013, and at time of writing, a new government had not yet formed, leaving draft laws to stop torture, improve the treatment of migrant domestic workers, and protect women from domestic violence, stalled in Parliament for most of 2013.

Violence from neighboring Syria spilled over into Lebanon including through kidnappings, cross border shelling, and car bombings in Beirut and Tripoli.

Kidnappings of Lebanese in Syria by both Syrian government forces and armed opposition groups led to retaliatory kidnappings in Lebanon by victims’ relatives. Lebanese authorities helped to facilitate the release of some kidnapped victims, but have not taken law enforcement measures either to prevent or prosecute kidnappings.

On July 9, a car bombing in the mostly Shia Beir al-Abed neighborhood in Beirut’s suburbs left dozens wounded. On August 15, a previously unknown Syrian opposition group, the Aisha Brigades, claimed responsibility for a car bombing in Beirut’s Shia suburbs that killed some 70 people and injured hundreds more. Eight days later, on August 23, two car bombs targeting two Sunni mosques in Tripoli, where sheikhs who support the Syrian opposition were giving sermons, left more than 40 dead and 400 wounded. No one claimed responsibility for these bombings.

On October 30, Ali Eid, the chief of the Arab Democratic Party and a former parliamentarian, was summoned by the Internal Security Forces’ Information Branch in connection to the car bombings in Tripoli. At time of writing, Eid was still refusing to respond to the summons.

Lebanese government forces were largely absent in the targeted neighborhoods until late September, when Internal Security Forces were first deployed to the Beirut suburbs.

Authorities planned similar measures for Tripoli, and in November, Internal Security Forces deployed in several neighborhoods there including Jabal Mohsen and Bab al-Tabbaneh as the security plan began to be implemented.

Clashes in Tripoli and Saida

On November 12, amidst fears of renewed violence, the army also deployed to several neighborhoods in Tripoli and set up checkpoints following the assassination of Sheikh Saad Eddine Ghaya, a pro-Syrian government Sunni sheikh.

The Tripoli clashes have resulted in a sharp increase in sectarian attacks, including attacks against Alawite workers and the destruction of Alawite shops. On May 31, Sunni militants told Alawite workers at the Tripoli municipality not to come to work or face death. On November 2, a bus transporting Alawite workers stopping at the entrance of Bab al-Tabbaneh came under attack and nine workers were injured. On November 3, the army said that it had detained one man in relation to the incident.

The government failed to take steps that could protect residents, such as confiscating weapons, arresting and prosecuting fighters, and maintaining an active security presence.

Heavy clashes broke out in the southern city of Saida on June 23, after armed followers of Sheikh Ahmed al-Assir, a pro-Syrian opposition Imam, fired on an army checkpoint and the army counterattacked. Two days of clashes left 18 soldiers and 28 of al-Assir’s supporters dead, according to media reports.

Following the June clashes in Saida, the Lebanese army detained individuals it suspected of supporting al-Assir. Many of whom reported being beaten and tortured. Seven individuals told Human Rights Watchthat security officers kicked them and beat them with fists and, in some cases, sticks and cables. Nader Bayoumi died while in military custody, apparently as a result of beatings in custody. A military judge issued arrest warrants in July for four soldiers and one officer implicated in Bayoumi’s death. Their trial was ongoing at time of writing.

Internal Security Forces (ISF) subjected suspected drug users, sex workers, and lesbian, gay, bisexual, and transgender people in their custody to ill-treatment and torture. The most common forms of alleged abuses were beatings with fists, kicks with boots, and assault with implements such as sticks, canes, and rulers.

Lebanon, with substantial assistance from donor countries, has taken a number of steps to expand and reform the ISF in the last five years, including by establishing a new code of conduct. However, these efforts remain inadequate and have failed to address ongoing abuses. Despite repeated government pledges to prevent torture and ill-treatment, accountability remains elusive. Lebanon has not yet established a national preventive mechanism to visit and monitor places of detention, as required under the Optional Protocol to the Convention against Torture (OPCAT), which it ratified in 2008.

By September, over 816,000 Syrian refugees in Lebanon had approached UNHCR for registration. Registration does not grant Syrians legal status, but enables them in some cases to receive assistance. Syrians who enter at official border crossings are granted a six-month residency permit with one-time possibility of renewal, after which extension requires a $200 renewal fee. Absent legal status, refugees face the risk of detention for illegal presence in the country.  Lebanon, the last of Syria’s neighboring countries to maintain an open border policy, began arbitrarily barring Palestinians from Syria from entering the country in August.

Over 60,000 Palestinians from Syria have entered Lebanon since the conflict began, joining the estimated 300,000 Palestinian refugees already living in Lebanon in appalling social and economic conditions. The year 2013 saw no tangible improvement in Palestinian access to the labor market despite a 2010 labor law amendment that was supposed to ease such access. In 2013, a decision by the minister of labor exempted Palestinians from insurance and medical examination requirements typically required to get a work permit but its impact was limited as Lebanese laws and decrees still bar Palestinians from working in at least 25 professions requiring syndicate membership, including law, medicine, engineering, and from registering property.

Migrant domestic workers are excluded from the labor law and subject to restrictive immigration rules based on employer-specific sponsorship—the kafala system—which put workers at risk of exploitation and abuse. While outgoing Labor Minister Charbel Nahhas announced in January 2012 that he would look at abolishing the kafala system, in 2013 Labor Minister Salim Jreissati failed to do so or to put forward legislation that would protect the estimated 200,000 migrant domestic workers in the country. In July, a criminal court sentenced an employer to two months in prison, imposed a fine, and required her to pay damages and compensation to a migrant domestic worker whose wages she had not paid for years. Migrant domestic workers suing their employers for abuse continue, however, to face legal obstacles and risk imprisonment and deportation due to the restrictive visa system.

In June, the Association of Owners of Recruitment Agencies in Lebanon adopted a self-regulating code of conduct to protect the rights of migrant domestic workers, but the impact was limited in the absence of enforcement mechanisms.

Following the March 2012 suicide of Alem Dechasa-Desisa, an Ethiopian domestic worker, the trial of recruitment agency owner Ali Mahfouz, who is accused of contributing to her suicide, began in February 2013 but was postponed until February 2014.

In July 2013, a parliamentary subcommittee approved a 2010 draft bill that seeks to protect women and children from domestic violence, criminalizing domestic abuse for the first time. At time of writing, parliament had yet to vote on the bill. Discriminatory provisions that significantly harm and disadvantage women continue to exist in personal status laws, determined by an individual’s religious affiliation. Women suffer from unequal access to divorce and, in the event of divorce, to child custody. Lebanese women, unlike Lebanese men, cannot pass on their nationality to foreign husbands and children, and continue to be subject to discriminatory inheritance law.

In October 2012, Justice Minister Shakib Qortbawi put forward a draft decree to the cabinet to establish a national commission to investigate the fate of Lebanese and other nationals who “disappeared” during and after the 1975-1990 Lebanese civil war. The cabinet formed a ministerial committee to examine the draft, but at this writing, no action had been taken.

In September, a criminal case brought by Najat Hashisho against three members of the Lebanese Forces militia for “disappearing” her husband over 30 years ago was dismissed for lack of evidence. Hashisho and her attorney argued there was significant evidence against the accused and planned to appeal the decision.

In February 2012, the UN’s Special Tribunal for Lebanon announced that the in-absentia trial of four indicted members of Hezbollah, for the killing of former Prime Minister Rafik Hariri in 2005, would go forward. The trial is tentatively scheduled to begin on January 13, 2014.

Syria, Iran, and Saudi Arabia maintain a strong influence on Lebanese politics through local allies, and increasingly so as Lebanon becomes more involved in the conflict in Syria.

Many countries have given extensive, albeit insufficient, support to help Lebanon cope with the Syrian refugee crisis and to bolster security amidst spillover violence. In July, the UN Security Council issued a presidential statement calling for strong international support to Lebanon to help it meet its security challenges and to assist the government in responding to the refugee influx.