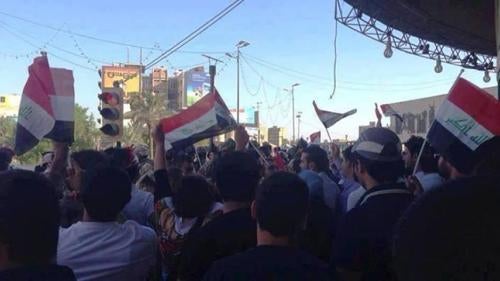 Human rights conditions in Iraq continued to deteriorate in 2013. Security dramatically declined as sectarian tensions deepened. Al Qaeda in Iraq and other insurgent groups emboldened by the Syrian conflict and Iraq’s political crisis carried out nearly daily attacks against civilians, making 2013 the bloodiest of the last five years. Suicide attacks, car bombs, and assassinations became more frequent and lethal, killing more than 3,000 people and injuring more than 7,000 between May and August alone.

In December 2012, thousands of Iraqis took part in demonstrations in mostly Sunni areas, demanding reform of the Anti-Terrorism Law and the release of illegally held detainees. Prime Minister Nuri al-Maliki announced in January 2013 that he had created special committees to oversee reforms, including freeing prisoners and limiting courts’ use of secret informant testimony. At time of writing, there was little indication that the government had implemented reforms. Security forces instead used violence against protesters, culminating in an attack on a demonstration in Hawija in April, which killed 51 protesters. Authorities failed to hold anyone accountable.

The government responded to increasing unrest with mass arrest campaigns in Sunni regions, targeting ordinary civilians and prominent activists and politicians under the 2005 Anti-Terrorism Law. Security forces and government supporters harassed journalists and media organizations critical of the authorities.

On May 11, villagers south of Mosul found the bodies of four men and a 15-year-old boy, which bore multiple gunshot wounds. Witnesses had last seen them alive on May 3 in the custody of the federal police 3rd Division, but at time of writing, the government had not announced any investigation into the deaths.

Iraq executed at least 151 people as of November 22, up from 129 in 2012 and 68 in 2011. In mid-March,after Justice Minister Hassan al-Shimmari announced that the ministry was about to execute 150 people, United Nations High Commissioner for Human Rights Navi Pillay likened Iraq’s justice system to “processing animals in a slaughterhouse.” The Justice Ministry rarely provides information about the identities of those executed, the charges against them, or the evidence presented against them at trial.

Security forces responded to peaceful protests with threats, violence, and arrests. In April, army and police forces used lethal force on demonstrators who had been gathering largely peacefully for five months. In Fallujah and Mosul in February and March, respectively, security forces fired on demonstrators, killing at least seven people in both incidents.

On April 23 in Hawija, soldiers, federal police, and Special Weapons and Tactics (SWAT) forces fired on a crowd of about 1,000 demonstrators. A ministerial committee tasked with investigating the attack has so far failed to interview any witnesses or participants or hold any members of the security forces accountable. Security forces from the police, army, and SWAT responded to protests against corruption and lack of services in August in Baghdad and Nasiriya with force, arresting, and in some instances, beating protesters, then prosecuting them on specious charges of “failure to obey orders.” The Interior Ministry invoked broad and restrictive regulations on protests to refuse permits for peaceful demonstrations, in contravention of Iraq’s constitutional guarantee of free assembly.

The Committee to Protect Journalists (CPJ) named Iraq the “worst nation” on its 2013 Impunity Index of unsolved journalist murders. There have been no convictions in more

than 90 murders of journalists since 2003, and the government shows no will to solve the murders.

On April 1, unknown assailants attacked the Baghdad offices of four independent daily newspapers, destroying equipment, setting fire to the buildings, and injuring several employees. Police announced an investigation into the attacks but released no results.

On April 28, the government Communications and Media Commission of Iraq (CMC) suspended the licenses of 10 satellite television stations and prevented them from broadcasting. These were all pro-Sunni opposition stations, leaving other channels, including all state-run channels, free to broadcast. A senior CMC official told Human Rights Watch that the CMC had no legal basis for the suspensions, but ordered them because the 10 stations were “promoting violence and sectarianism.” The commission announced on its website that the suspensions were in response to the coverage of the Hawija attack.

Journalists reported that security forces blocked them from accessing antigovernment demonstrations, effectively restricting media coverage. A television correspondent told Human Rights Watch that men in military uniforms and vehicles who refused to identify themselves abducted him on December 28 in Ramadi when he tried to cover one of the ongoing demonstrations. They blindfolded and threatened to kill him before releasing him.

Between July and September, unknown gunmen assassinated at least five journalists in Mosul. Two worked for the Sharqeyya news channel, one for the Mosuleyya news channel, and two were spokesmen for Mosul’s governor. The government has not announced the results of any investigations into the killings.

Female prison inmates suffer from overcrowding and lack sufficient access to female-specific health care. Women are frequently detained with their young children, who are deprived of access to education and adequate health care as well as light, fresh air, food, and water. Dozens of women reported that security forces detained, beat, tortured, and in some instances, sexually abused them as a means of intimidating or punishing male family members suspected of terrorism.

On October 27, Iraq’s Justice Ministry announced that it had sent a draft law on Jaafari (Shia) jurisprudence and personal status to the Cabinet for approval and referral to the Parliament for passage. The draft law stipulates that Jaafari jurisprudence in Islamic Sharia would govern Shia Iraqis in personal status issues such as marriage, divorce, inheritance, and adoption. Local rights groups expressed concern that the proposed legislation would feed sectarianism because, if adopted, different sects will be governed by different rules in matters of personal status laws. The proposed legislation contains numerous provisions that violate women’s and children’s rights. Particularly troublesome are articles that would lower the marrying age for females—18 for both men and women under Iraq's current Personal Status Law (1959)—­to the age of 9 for females and 15 for males; prevent Muslim males from marrying non-Muslim females except on a temporary basis; broaden the permissible conditions for polygamy; give men the right to prevent their wives from leaving the house without permission; and restricts women’s rights in matters of divorce and inheritance even more than the current Personal Status Law.

Many Iraqi women have lost their husbands as a result of armed conflict, generalized violence, and displacement. The resulting financial hardship has made them vulnerable to trafficking for sex trafficking and sexual exploitation. The parliament passed a counter-trafficking law in April 2012, but authorities have done little to enforce or prevent it. In February, a government official told Human Rights Watch that security officers and judges are not educated about the law and courts continue to prosecute trafficking victims under laws criminalizing prostitution.

The KRG passed the Family Violence Law in 2011, but officials have done little to implement the provisions criminalizing domestic violence and “honor” killings. Dozens of male family members have abused or killed female relatives since the law was passed. Local organizations report that the government has not created special courts to prosecute domestic violence cases, hired additional female security officers, or educated security officers about the law, as the law requires.

According to the United Nations High Commissioner for Refugees (UNHCR), over 206,600 Syrian refugees have fled to Iraq since 2011, a dramatic increase from the 30,000 Syrians who reportedly took refuge in Iraq in 2012.

Since August 2012, the Baghdad government-administered al-Qaim and al-Rabia border crossings have been closed to Syrian refugees. On August 15 2013, the KRG reopened the Peshkapor crossing, near Duhok, after having closed the crossing for over a month. Over 60,000 refugees fled into the KRG-controlled territory in the two months that followed.

Thousands of Iraqis remain displaced within their own country. They continue to reside in squatter settlements without access to basic necessities, such as clean water, electricity, and sanitation, and the government has no plan for their return. In July, hundreds of families fled the Moqdadeya area of Diyala province when Asa’ib Ahl al-Haq, a pro-government Shia militia, distributed leaflets to Sunni residents threatening them with death. Diyala residents said that security forces did nothing to protect them or to facilitate their return.

In September 2012, the UN Assistance Mission for Iraq (UNAMI) oversaw the transfer of about 3,200 members of the exiled Iranian opposition organization, Mojahedin-e Khalq (MEK), from Camp Ashraf, a former military base where the group had resided since 1986, to Camp Liberty, another former military base. On February 9 and June 15, unidentified armed men attacked Camp Liberty, killing 11 and injuring many more. The MEK reported that 52 of its members were shot and killed in an attack on September 1 at Camp Ashraf. The group said that Iraqi security officials carried out the attacks, but officials denied the allegations and blamed the deaths on infighting among camp residents.

In his outgoing address to the UN Security Council, former UNAMI envoy Martin Kobler voiced concern over residents’ reports that the MEK leadership prevents group members from participating in the UNHCR resettlement process, denies them access to medical treatment, and threatens them for disagreeing with camp leaders or voicing a desire to leave.

Attacks on Civilians by Non-State Actors

Al Qaeda in Iraq issued statements claiming responsibility for lethal suicide, car bomb, and other attacks in Iraq including: a bombing at a football field on June 30 that killed 12 people, mostly boys under 16; a car bomb explosion on July 12 at a Shia funeral in Moqdadeya, west of Baghdad, that killed 10 people, including emergency services workers who died when a suicide bomber targeted them as they assisted the first set of casualties; and July 21 attacks on two Baghdad prisons that, according to the Justice Ministry, killed at least 68 members of the security forces and an unknown number of prisoners. Taken together, such attacks amount to an ongoing and systematic policy of killing civilians that may constitute crimes against humanity.

Shia militias carried out targeted assassinations and high-ranking officials reported that members of the Shia militia group Asai’b Ahl al-Haqq were increasingly formally integrated into the government, largely through posts in the security ministries. Residents of mixed Sunni-Shia neighborhoods in Baghdad and other areas in the country reported that Shia armed groups Asa’ib Ahl al-Haqq and Kita’ib Hezbollah threatened Sunni residents with death if they did not leave the areas.

Ten years after the US-led invasion of Iraq, the US government has turned a blind eye to serial abuses. Accountability for abuses committed by coalition forces in Iraq remains almost nonexistent.

On his first visit to the US in two years, Prime Minister Maliki met with President Barack Obama on November 1 to request a range of security aid from the US, including heavy weapons, increased intelligence and other forms of counterterrorism support. On the occasion of the visit, several senators wrote to Obama expressing their concern over Maliki’s “sectarian and authoritarian agenda” and stressed the need for Maliki to present a plan for reconciliation with Iraq’s disenfranchised Sunni population.