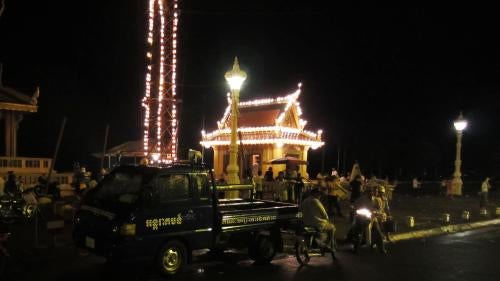 Cambodia became engulfed in a human rights crisis after national assembly elections on July 28, 2013. Final results announced by the National Election Committee (NEC), a body controlled by the ruling Cambodian People’s Party (CPP), returned the CPP, in power since 1979, to a majority in the National Assembly. The assembly then chose Hun Sen as prime minister, a post he has held since 1985. Large-scale demonstrations ensued amidst credible allegations that electoral irregularities and CPP control over election bodies affected the final outcome. Security forces repeatedly used excessive force to suppress post-election protests and social unrest, resulting in two deaths and many injuries.

Although Cambodia’s rapidly growing social media sector remains largely unrestricted, almost all state and private television stations and almost all print media, domestic radio stations, and news websites are controlled by or are loyal to the CPP. While many labor unions exist, strikes are often violently broken up by the security forces.

Cambodian King Norodom Sihamoni amnestied the leader of the opposition Cambodia National Rescue Party (CNRP), Sam Rainsy, on July 14, 2013, making it possible for Rainsy to return to Cambodia without facing imprisonment for previous convictions on trumped-up charges. However, his right to vote and run in the July 28 elections was not restored.

The CPP controls the media, security forces, and all election management bodies, including the NEC and its provincial and local affiliates, and the Constitutional Council. Voter registration in 2013 was marred by CPP-orchestrated fraud and other irregularities. The NEC announced that the CCP won 68 seats and the CNRP won 55 seats in the election, a much closer result than the CPP expected, but it rejected CNRP demands for an independent investigation into the irregularities.

In the run-up to elections, commanders of the army, gendarmerie, and police openly campaigned for the CPP and Hun Sen. After the ballot, they proclaimed their support for the contested CPP victory. Hun Sen then ordered a massive deployment of troops and police in Phnom Penh and elsewhere in an attempt to prevent demonstrations. A security force lockdown of the capital, Phnom Penh, on September 15 was accompanied by excessive force against social unrest following the demonstrations, killing one person and injuring approximately two dozen others.

On September 20 and 22, security force operations broke up small peaceful protest vigils in Phnom Penh, on the second occasion deliberately attacking human rights monitors and journalists along with protesters, injuring at least 20 people. On November 12, 2013, security forces again employed excessive force, this time while obstructing a march by striking workers, shooting and killing one person and wounding nine others.

Attacks on Civil Society and Imprisonment of Human Rights Defenders

In the months before the July 28 elections, security forces violently broke up peaceful gatherings by civil society groups, especially those protesting alleged land-grabbing.  Excessive force resulted in serious injuries to protesters. After the elections, government-backed religious authorities threatened and in some cases assaulted Buddhist monks in order to prevent them from joining opposition demonstrations.

At time of writing, at least five human rights defenders were serving prison terms and three others sentenced in absentia were facing prison if apprehended. All were tried on politically motivated charges, mostly in connection with defending land tenure rights. They included Bun Roatha, a key figure opposed to land grabbing in Kratie province, who was sentenced in absentia to 30 years in prison. Yorm Bopha, sentenced to prison on trumped up charges for leading a protest against illegal evictions in Phnom Penh, was temporarily released on November 22, 2013, when the Supreme Court referred her case to a lower court for further review.

Forces under Hun Sen and the CPP have committed frequent and large-scale abuses, including extrajudicial killings and torture, with impunity. Instances in 2013 included the case of the CPP governor of Bavet municipality, Chhouk Bandit: although convicted of “unintentional injury” on June 25, 2013, in connection with his shooting of three women workers during a strike near the town in February 2012, he was not detained for trial and was allowed to abscond despite his guilty verdict. Disregarding considerable evidence implicating government authorities, no one was convicted in a 2013 trial for the brutal murder of journalist Hang Serei Udom in September 2012 after he published reports alleging official involvement in illegal logging. No serious investigations were carried out into the killing and injury of protesters and bystanders during post-election protests and unrest in September and November 2013.

Those responsible for the 2004 killing of labor leader Chea Vichea remain at large. After the killing, the government arrested and then instructed the courts to convict Born Samnang and Sok Sam Oeun. The two were released in 2009 after the prosecution admitted that there was no evidence against them, but a court later re-imprisoned them in 2012, sentencing them to 20 years in prison. Under intense international pressure on the government, the Supreme Court acquitted and released both men on September 25, 2013. The court, however, refused their demand for compensation.

A government moratorium remained in place on the granting of Economic Land Concessions (ELCs) for industrial-scale corporate agriculture on state lands. Such ELCs have adversely affected hundreds of thousands of people. Economically and politically powerful actors, however, continue to grab land to which impoverished residents and cultivators have legitimate tenure claims, provoking sometimes violent confrontations.

A program organized and run by Hun Sen in his own name to bestow land titles on some people living within the peripheries of ELCs and other state lands ended just before the elections with claims the program had benefited up to 360,000 needy households. While many indeed benefitted, in many places wealthy and powerful interests diverted the program to increase their land-holdings. Hun Sen suspended the program in the run-up to the election. However, in November 2013, the government announced it would resume the program shortly.

The authorities routinely detain alleged drug users, homeless people, “street” children, sex workers, and perceived people with disabilities in “correction centers” around the country holding at least 2,000 people each year without due process, where the mainstays of ostensible “treatment” are exhausting physical exercises and military-like drills. Guards and other staff whip detainees with rubber water hoses, beat them with bamboo sticks or palm fronds, shock them with electric batons, sexually abuse them, and punish them with physical exercises intended to cause intense physical pain. Detainees from some centers are forced to work on construction sites, including in at least one instance to help build a hotel.

The United Nations-assisted Extraordinary Chambers in the Courts of Cambodia (ECCC) continues to suffer the long-term effects of government obstruction of and non-cooperation with efforts to bring leaders of the Khmer Rouge to justice for genocide, crimes against humanity, and war crimes committed during their rule from 1975 to 1979. The ECCC has fully tried and convicted only one person since it was established in 2006, the head of the infamous Tuol Sleng torture center. It is currently trying just two alleged Khmer Rouge senior leaders, Nuon Chea and Khieu Samphan, both elderly and in ill-health, and only for a few of the crimes for which the ECCC originally indicted them in 2010. Another ECCC indictee, Leng Sary, died on March 14, 2013.

Government non-cooperation slowed UN investigations into five other suspects begun in 2006, one of whom died in 2013. Popular interest and support for the ECCC has greatly waned.

The Cambodian government remained heavily dependent on foreign assistance. Japan was the major aid donor, while China was the largest direct foreign investor. Vietnam continued to maintain close connections at national and local levels with government and security force agencies.

The United States provided some non-lethal military aid plus military training, but was the most forthright foreign government in raising human rights concerns. Meeting in September, the United Nations Human Rights Council extended for two years the mandate for a special rapporteur on the human rights situation in Cambodia.