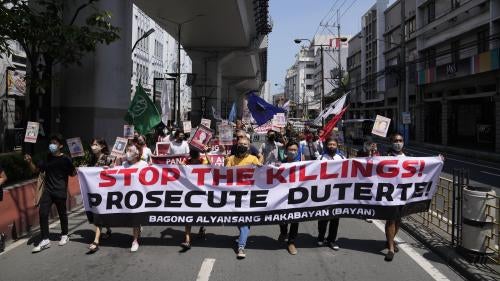 Serious human rights abuses continued in the Philippines in 2021. On September 15, the International Criminal Court (ICC) agreed to open a formal investigation into possible “crimes against humanity” committed during President Rodrigo Duterte’s “war on drugs” from 2016 to 2019, and extrajudicial executions committed in Davao City in the southern Philippines from 2011 to 2016, when Duterte was mayor.

In October, Maria Ressa, the co-founder and executive editor of the news website Rappler, won the Nobel Peace Prize for defending media freedom, specifically for resisting the Duterte government’s attempts to muzzle the press.

In July, the Philippine government and the United Nations launched a joint “human rights program” to address human rights violations and accountability failings in the country, reflecting domestic and international concerns about “drug war” killings. Rights groups, including Human Rights Watch, consider the program inadequate, and continue to call for an independent international investigation.

Killings of civilians and “red-tagging”—accusing activists and others of being combatants or supporters of the communist New People’s Army—are endemic to the government’s counterinsurgency campaign. Many of those red-tagged are subsequently killed. Journalists covering the insurgency or investigating abuses and corruption also face harassment and violence.

“Drug War” Killings and the ICC

In September, a pre-trial chamber of the ICC granted the prosecutor’s request to open a formal investigation into alleged crimes against humanity in the Philippines from the time the country ratified the ICC’s Rome Statute on November 1, 2011, until its withdrawal from the treaty on March 16, 2019. In its decision to greenlight the investigation, the pre-trial chamber stated the government’s anti-drug campaign “cannot be seen as a legitimate law enforcement operation, and the killings neither as legitimate nor as mere excesses in an otherwise legitimate operation.” It further said there has been “a widespread and systematic attack against the civilian population” as part of a state policy.

The decision echoed claims by various rights groups that between 12,000 and 30,000 people have been killed in the “drug war.” The government’s own data shows more than 6,190 people were killed in police operations from 2016 to August 2021.

The Department of Justice, which announced, in June 2020, the creation of a panel that would review deaths in the “drug war” attributed to police officers, said, in September 2021, that it was now investigating 52 cases involving 154 police officers implicated in questionable killings. This followed its admission before the UN Human Rights Council, in February, that officers failed to follow protocols during these operations. In many cases, police made no effort to examine allegedly recovered weapons, verify ownership, or conduct ballistic examinations. In most of the cases the Department of Justice reviewed, police also failed to follow standard protocols in the coordination of drug raids and in the processing of crime scene evidence.

The Justice Department investigation has faced criticism for repeated delays, lack of transparency, and refusal to involve the national Commission on Human Rights in its review. Responding to this criticism, the department released in October a preliminary report affirming that police were culpable in at least 52 cases and promised to investigate further.

In March, nine individuals belonging to different activist groups were killed during police raids in the Calabarzon region south of Manila. All those killed were previously accused of communist involvement. The simultaneous police raids occurred two days after President Duterte publicly ordered law enforcement officials to “finish off” communist insurgents. Human rights groups rejected claims that the victims were rebels or rebel supporters. In December 2020, police killed nine members of an Indigenous people’s community on the island of Panay, in the central Philippines.

The counterinsurgency campaign has likewise targeted lawyers, including some representing clients who have been “red-tagged.” In Cebu City in August, gunmen shot dead Rex Fernandez, a human rights lawyer whose group, the National Union of People’s Lawyers, provides legal services to activists. Juan Macababbad, a human rights lawyer who worked on environment and Indigenous rights cases, was shot dead in September, by gunmen in South Cotabato province, in the southern Philippines.

The National Task Force on Ending Local Communist Armed Conflict is the main government agency engaged in “red-tagging.” It is composed of officials from several government agencies, including the military and the police. In addition to activists and lawyers, the task force has “red-tagged” journalists, media groups, and even civilian food volunteers.

One of the tools the government has been using against activists is the Anti-Terrorism Act, a law Duterte signed in July 2020. Various groups denounced the law because, as the UN high commissioner for human rights noted, it “dilutes human rights safeguards” and creates a “chilling effect on human rights and humanitarian work.” Since its passage, the law has been challenged but has also been used by the government against activists, Indigenous peoples, unionists, as well as alleged communist insurgents.

There were fewer serious Covid-19-related rights violations in the Philippines during the second year of the pandemic compared to the first, which had seen harsh treatment of quarantine violators by law enforcement. Age-based restrictions on movement for those under 18 and over 65 years of age prevented children and older people from leaving their homes, although in October, the government eased this restriction. Schools remained closed nationwide at time of writing, affecting the education of 28.5 million students.

Authorities imposed strict quarantine regulations across the country and had arrested tens of thousands of people for quarantine violations, some of whom spent time in detention while majority were given warnings, fined, or ordered to do community service. In November, the government eased these restrictions. Detention facilities in the Philippines have always been congested, posing considerable challenges for vaccination, with authorities reporting success in some pretrial or holding facilities but not in others.

Critics accused the government of mishandling its response to the pandemic, including inadequate initial vaccination roll-out. Vaccination for the general population began in November. There have also been complaints of inadequate financial support for communities affected by lockdowns, as well as failure to pay frontline health workers properly and on time, inducing some to quit. In September, a Senate committee uncovered alleged corruption in the government’s purchase of medical supplies, favoring individuals identified with the administration.

Media freedom and freedom of expression received a big boost in October when Maria Ressa, the co-founder and executive editor of the news website Rappler, was awarded the Nobel Peace Prize, along with Russian editor Dmitry Muratov. Ressa and Rappler have been the target of reprisals from the Duterte government and its supporters for the website’s reporting on “drug war” killings and for helping to expose what Ressa called Duterte’s “weaponization of the Internet” to target government critics and dissidents. The killing of journalists continues.

In October, Orlando Dinoy of Newsline Philippines and Energy Radio RM, was killed inside his home in Digos City. In July, an unidentified gunman shot dead Reynante Cortes, a radio broadcaster, as he was leaving his radio station in Cebu City, in the central Philippines. Cortes was known for his on-air commentary on local politics and corruption. In November 2020, gunmen killed newspaper columnist and radio commentator Virgilio Maganes in Villasis town, Pangasinan, a province north of Manila.

In April, journalists from Northern Dispatch, a weekly newspaper, were harassed by municipal police in Kalinga province, in the northern Philippines, for covering an event organized by leftist groups. Journalists of the same newspaper were later “red-tagged” by authorities. In September, leftist media organizations Bulatlat and AlterMidya accused the Philippine military of launching “denial of service” attacks on their websites.

Philippine civil law sets out that a person can only be legally married at age 18. But this law does not apply to Muslims; under another law, a Muslim boy can marry at age 15 while a girl can be married off when she reaches puberty. The proposed “Girls Not Brides Act,” passed by both houses of the Philippine Congress and now awaiting President Duterte’s signature, will make it unlawful for anyone to marry a child (younger than 18) and make it a criminal offense to officiate such a union. According to the UN, one in six Filipino girls are married before age 18.

Another law awaiting the president’s signature would raise the age of sexual consent to 16 years from the current 12 years. In September, the Senate passed its version of the statutory rape law after the House of Representatives passed its own version the year before. According to legislators, the Philippines currently “has the lowest age of sexual consent in Asia and one of the lowest in the world.” In a 2015 study on violence against children in the Philippines, UNICEF said one in five Filipino children experienced their first sexual encounter at age 13 to 17.

The United States continues to provide military assistance to the Philippines despite the Duterte government’s poor human rights record. In June, the Biden administration notified Congress of a proposed sale of $2.5 billion in arms to the Philippines, including fighter jets and two kinds of missiles. In September, both countries announced that they would restart defense cooperation agreements that had been stalled by President Duterte’s earlier threat to withdraw, including an agreement for building facilities for US troops in the Philippines.

In February, the EU and the Philippines held bilateral human rights talks. The Philippines continues to enjoy EU trade benefits pursuant to the Generalized System of Preferences Plus (GSP+), which are conditional on the ratification and implementation of 27 international conventions on human rights, labor rights, and governance. The EU postponed a GSP+ monitoring mission, citing Covid concerns. Negotiations for the EU-Philippines free trade agreement, on the other hand, have been frozen since 2019 over human rights concerns related to the “drug war.”

In July, the Philippines and the United Nations signed a three-year joint program that aims to improve the human rights situation in the country. The program, which critics deem inadequate, was the UN’s response to calls by members of the UN Human Rights Council to extend “technical cooperation” and “capacity building” to the Philippines, which has seen a deterioration of human rights through Duterte’s “war on drugs.” The program’s components include the creation of a “national mechanism for reporting and follow-up” on human rights as well as “human rights-based approaches to drug control.”