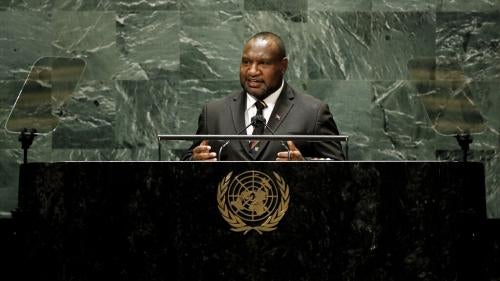 Although a resource-rich country, almost 40 percent of Papua New Guinea’s (PNG) population lives in poverty. The Covid-19 pandemic highlighted ongoing challenges with government inaction, economic mismanagement, and a severely under-resourced health care system. Before Covid-19 started spreading, PNG was already struggling with outbreaks of measles, drug-resistant tuberculosis, and polio with poor vaccination rates. Weak implementation of laws on violence against women and children foster a culture of impunity. Prime Minister James Marape has committed to reforms to address gender-based violence, but real progress has yet to be seen.

Violence against women and girls is rampant. Over 1.5 million people experience gender-based violence each year.

In 2020, approximately 15,000 cases of domestic violence were reported, but only 300 people were prosecuted, and 100 people were convicted. Police officials admitted at the inquiry that the police force cannot currently keep women and children safe and lack resources for thorough investigations.

PNG laws designed to protect women and children, including the Lukautim Pikinini (Child Welfare) Act 2015 and the Family Protection Act 2013, are rarely enforced. Initiatives such as Family Sexual and Violence Units within the police force remain limited. A lack of services for survivors of gender-based violence compounds the problem.

In 2021, instances of domestic violence continued to spark outrage. In May, the body of a 31-year-old woman, Imelda Tupi Tiamanda, was found wrapped in tarpaulin in her husband’s vehicle at a police checkpoint. Police arrested and charged three men, including her husband. In September, the three men were released from prison and the magistrate dismissed the charges citing a lack of evidence.

Between May and June, five women were violently attacked following accusations of practicing “sorcery,” one of whom was killed. In May, attackers accused Mary Kopari of sorcery and tied her up and burned her to death in Komo-Magarima District. The attack was filmed and while police know the identity of some of the attackers, no arrests have been reported.

PNG has one of the highest maternal mortality rates in the world. More than 2,000 women and girls die in childbirth in PNG each year. These deaths are largely preventable. The risk of maternal death is increased by limited access to hospitals, with 80 percent of the population living outside urban centers.

Children’s Rights to Health and Education

One in 13 children die each year of preventable disease. Children living in rural areas are twice as likely to die in their first five years of life compared to children living in urban areas. Covid-19 has put child health outcomes at risk due to interrupted vaccination and other health programs.

In March, 2.1 million children were affected by a four-week school closure. Before the pandemic,  7 percent of children—over  86,000 children—were out of primary, and 14 percent were out of lower-secondary school, because of barriers to access including remoteness, gender inequality, and a lack of learning resources.

Police violence, including against children, is an ongoing problem in PNG. In April, police entered the residence of lawyer Laken Lepatu Aigilo without an arrest or search warrant and assaulted him before detaining him. PNG Police Minister David Manning ordered his release the following day. Police authorities conducted an internal investigation into the incident and police confirmed with Human Rights Watch that the officer involved was arrested, suspended, and that the matter was before the criminal court.

At time of writing, about 124 refugees and asylum seekers remained in Papua New Guinea, transferred there by the Australian government since 2013. In October, Australia said it would end offshore processing in the country by December 2021 and those who remained in PNG could stay there or be transferred to Nauru or giving them the option to remain in PNG with a promise of a “permanent migration pathway.”  In April, attackers robbed and assaulted around 15 asylum seekers at gunpoint. At least three required medical attention.

Refugees and asylum seekers in PNG continue to endure violence and harassment, with little protection from authorities. Medical facilities in PNG are woefully inadequate and have proven unable to cope with the complex medical needs of asylum seekers and refugees, particularly their mental health needs.

In July, Australian mining company Rio Tinto agreed to fund an independent assessment of the human rights and environmental impacts following the closure of its Panguna copper and gold mine in the autonomous region of Bougainville. One hundred and fifty-six Bougainville residents petitioned the Australian government in 2020 to investigate Rio Tinto’s involvement in human rights abuses. Petitioners said that polluted water from the mine pit flowed into rivers and polluted fields.

In 2020, the PNG government refused an application to extend the Porgera gold mine lease in Enga Province with Prime Minister Marape citing long standing environmental and resettlement issues. In April of that year, the PNG government and local Porgera landholders took a majority share of the Porgera gold mine in Enga province, with the remainder held by joint venture partners Canadian company Barrick Gold and Chinese company Zijin Mining Group. At time of writing, the mine had been closed for over a year, with negotiations continuing between the parties.

In March, a report by Jubilee Australia Research Centre and Project Sepik detailed environmental and social risks associated with a proposed gold, copper, and silver mine to be built on the Frieda River in the Sepik region. The mine, if approved, would be the largest in PNG’s history.

While contributing very little to global emissions that are driving the climate crisis, coastal and island communities in PNG are facing serious climate impacts as sea-level rise and coastal erosion limit access to food and water and force residents to relocate. Carterets Islanders, some of the world’s first communities displaced by the effects of climate change, have said that more than 50 percent of their land has already been lost due to sea level rise.

PNG is also working to reduce its own emissions. Deforestation and forest degradation drive a significant portion of the country’s emissions, and PNG has committed to reducing emissions from these sources by 2030. However, PNG has increased export of harvested timber in recent years and struggles to contain regulation and enforcement, and a failure to respect local land rights.

Approximately 1.2 million people in PNG are living with a disability according to the World Health Organization. Despite the existence of a national disability policy, PNG has yet to pass comprehensive disability legislation.

Same-sex relations are still punishable by up to 14 years of imprisonment in PNG’s criminal code. While there is little information on actual convictions, the law is sometimes used as a pretext by officials and employers to harass or extort money from gay and lesbian people in Papua New Guinea, including gay refugees.

According to the PNG government’s National Control Centre, as of November, more than 34,000 people had tested positive for Covid-19, and more than 520 people had died; inadequate testing means that the actual number of cases is likely far higher. Vaccination rates are extremely low  with only 3 percent of the population vaccinated as of November. As of November, only about 770,000 vaccine doses had been delivered to the country—enough to vaccinate approximately 6 percent of the population, according to UNICEF. Over 130,000 vaccines delivered by the global facility COVAX expired before they could be administered.

Australia is the biggest provider of aid and investment to PNG, and at time of writing had given Covid-19 support including 8,000 vaccine doses, 200,000 face masks, and 1 million surgical masks in 2021.

It is estimated that Australia has spent AUD$268 million (US$200 million) on offshore processing in PNG in 2019-2020, and approximately AUD$1.6 billion (US$1.2 billion) since the PNG Supreme Court ruled that Australia’s detention of asylum seekers there was illegal in 2016.

China also provides significant development and economic support to PNG. In June, PNG’s Foreign Minister Soroi Eoe visited China and signed a US$22 million loan to support the creation of a ‘special economic zone’ in Kikori, in the Gulf of PNG. Later that month, the Chinese government provided PNG with 200,000 doses of Covid-19 vaccine.

In November, at the UN Human Rights Council’s Universal Periodic Review of PNG, countries urged the PNG government to improve gender-based violence, LGBT rights, and access to education for all children, including children with a disability. Fifteen nations questioned PNG’s retention of the death penalty and called for its abolition.