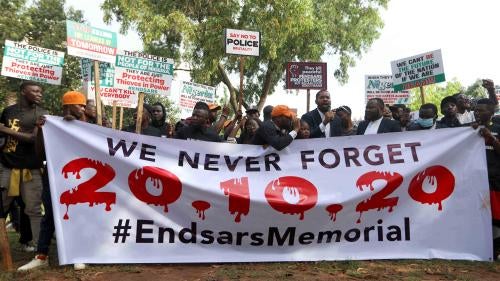 The Nigerian government’s ban on Twitter in June, after the social media company deleted a tweet by President Muhammed Buhari for violating its rules, signaled a worsening repression of fundamental rights in the country. The ban was widely condemned by citizens who rely on the platform for critical social and political discourse.

The reported death of Boko Haram leader Abubakar Shekau in June changed the dynamics of the conflict in the northeast and strengthened the breakaway Islamic State West Africa Province (ISWAP). In September, the Nigerian air force admitted that it had carried out an airstrike on a village in Yobe State that killed 10 civilians and injured 20. A spokesperson claimed the civilians were struck erroneously while the air force was responding to reported Boko Haram and ISWAP activities in the area, and that it had set up a board of inquiry to investigate. Authorities have not released any information on the progress or outcome of the investigation.

The International Criminal Court (ICC) determined in December 2020 that an ICC investigation is warranted for crimes committed in the Boko Haram-related conflict given inadequate domestic efforts to deliver justice for the crimes and after finding “reasonable basis to believe” the group, its breakaway factions, and Nigerian security forces had committed war crimes and crimes against humanity.

Communities in the northwest witnessed a spate of mass kidnappings of schoolchildren for ransom. Over 1,000 children were kidnapped between January and August 2021 by armed groups popularly known as bandits, according to Save the Children International.

There has yet to be accountability for violence and other abuses against protesters during the October 2020 #EndSARS protests against police brutality, including when security forces shot at peaceful protesters at the Lekki Toll Gate in Lagos.

Nigerians continue to grapple with the devastating economic impact of Covid-19, as the number of citizens experiencing hunger more than doubled during the pandemic. Although authorities sought to respond by introducing or expanding measures such as cash transfers and food assistance, only a tiny fraction of those needing support received it. This is largely due to the absence of a robust social protection system that recognizes and protects people’s right to an adequate standard of living.

Violence in the Northwest

Armed groups known locally as bandits carried out widespread killings, kidnappings, and looting across several states in Nigeria’s northwest region. These groups emerged following years of conflict between nomadic herdsmen and farming communities. According to SBM Intelligence, a Nigerian research organization, 519 people were kidnapped and 22 people killed in kidnapping-related incidents in northwestern Zamfara State alone between January and June. The activities of these groups have also caused massive displacement.

In response to the insecurity, President Buhari ordered airstrikes on the camps of suspected bandits, while some governors in the region have attempted amnesty deals resulting in pardons for criminal acts by bandits in exchange for peace, but most have failed. In September, authorities imposed a telecommunications shutdown in parts of the northwest to disrupt communication among the bandits.

Separatist Agitations in the South

Simmering separatist agitations from the Indigenous People of Biafra (IPOB) in the southeast and the Yoruba Nation in the southwest highlighted the worsening divisions and tensions in the country, to which the authorities sometimes responded with excessive use of force. IPOB leader Nnamdi Kanu was arrested abroad and brought to stand trial in Nigeria for charges including treason and terrorism. The authorities have not revealed where and how he was arrested, amid questions about the legitimacy of his arrest as his representatives claim he was abducted in Kenya. Kanu was previously arrested and charged in 2015. He fled the country in 2017 after he was released on bail.

Abuses by Armed Islamists in the Northeast

In March, suspected ISWAP fighters attacked a United Nations base and humanitarian hub in the Dikwa Local Government Area of Borno State, burning aid workers’ offices, destroying government facilities and hospitals, and abducting at least seven humanitarian workers. In a series of attacks in April, suspected ISWAP fighters set ablaze the facilities of three international aid organizations in Damasak town in Borno State. Eight people were killed, over a dozen were injured, and about 65,000 people were displaced. The UN suspended humanitarian operations in these areas to ensure safety of humanitarian staff.

The Borno State governor continued to relocate internally displaced persons from camps in the state capital, Maiduguri, to volatile areas, despite security concerns raised by humanitarian actors. In August, 11 civilians were killed, and several others injured during clashes between suspected ISWAP fighters and security forces in Ajiri Local Government Area of Borno State. Ajiri is one of the first locations to which internally displaced people were returned in 2020. The authorities also relocated more people to Ajiri in August just days before the deadly clashes there.

In December 2020, the chief prosecutor of the ICC announced that the Boko Haram- related conflict in the northeast warranted a full ICC investigation after finding “reasonable basis to believe” that the group and its breakaway factions, as well as Nigerian security forces, had committed war crimes and crimes against humanity.

The ICC reached this conclusion after considering the lack of progress on efforts to investigate and prosecute these crimes nationally. In response, Nigeria’s information minister accused the ICC of having “colluded” with civil society groups to "exacerbate” Nigeria’s security challenges, using threats of prosecution to demoralize security forces.

Trials for hundreds of Boko Haram suspects have been repeatedly postponed since 2019, and those that took place in the two preceding years were fraught with irregularities. Most of the charges against the more than 200 defendants in the flawed July 2018 trials were based on alleged confessions and involved vague accusations of supporting Boko Haram by repairing members’ vehicles, laundering their clothes, or supplying them with food and other items. Some of the defendants arrested in 2019 are still in being detained.

The Lagos Judicial Panel of Inquiry investigating the shooting of #EndSARS protesters by military officers at the Lekki Toll Gate in Lagos held its final hearing on October 19. Its final report and recommendations have not been made public. Recommendations from the panel have no force of law except that they are adopted by the Lagos State Governor, after which they can be enforced as a judgment of the State High Court. Courts cannot however automatically assume jurisdiction over police and military officers. Charges can only be brought against them after internal disciplinary processes lead to their being fired.

Military officers who were at the scene during the Lekki Toll Gate shooting on October 20, 2020, refused to appear before the panel. A military representative told the panel that officers at the scene only shot blank bullets after they were attacked by “hoodlums” who pelted them with stones and injured a soldier on the lip. The military had initially denied claims that officers shot at protesters. Human Rights Watch found that at least 15 people lost consciousness and appeared dead after the shootings at the Lekki Toll Gate; 10 of these bodies were then taken away from the scene by military officers.

After the Twitter ban was announced in June, the Nigerian Communications Commission (NCC), the telecommunications regulator, directed to suspend access to Twitter. Nigerians responded by using virtual private networks (VPNs) to circumvent the ban. The justice minister announced that those circumventing the ban will be prosecuted but this has yet to happen.

On June 22, the Court of Justice of the Economic Community of West African States (ECOWAS) ordered the Nigerian authorities to refrain from imposing sanctions, harassing, arresting, or prosecuting those using Twitter in Nigeria. The preliminary order was granted pending the determination of a case brought against the Nigerian government by a group of civil society groups challenging the Twitter ban. Hearing of the substantive case is still ongoing.

Despite repeated claims by the authorities that the ban would soon be lifted, the platform remained inaccessible through local internet service providers at time of writing.

In July, Nigerian media organizations launched a campaign against controversial media bills being considered at the national assembly aimed at bringing internet broadcasting under the control of the federal government’s broadcast regulator and empowering the president to appoint officials of the board of the Nigerian Press Council, which ensures the professional standards of the press, upon the recommendation of the information minister.

Later that month, Nigeria’s broadcasting authority asked broadcast stations to stop reporting details of insecurity issues or details of victims so as not to jeopardize the efforts of the Nigerian military and other security agents.

Security forces continued to disrupt #EndSARS related gatherings and protests. In February, police officers arrested people protesting a decision to reopen the Lekki Toll Gate in Lagos where military officers opened fire during the protests against police brutality in 2020. Following the arrests, a video surfaced showing over a dozen arrested protesters tightly packed together in a small yellow bus with their hands tied behind their backs in a position which appeared similar to a torture style known as ‘tabay.’ Tabay is a form of punishment used by the Nigerian security forces in which a person’s elbows are tied together behind his back, and the rope is pulled tighter and tighter until their rib cage separates.

In response to this, the Lagos State police authorities issued a statement denouncing the treatment of protesters and announcing an investigation to ensure officers responsible are held accountable. The authorities have yet to provide further information on the investigation. The protesters were charged with crimes including conduct likely to cause a breach of peace and violation of Covid-19 protocols and later granted bail.

In July, five men accused of homosexuality were arrested in Kano State by the state Hisbah Board, a religious police unit that enforces Sharia (Islamic law). Kano is among 10 Nigerian states that practice Sharia alongside Nigerian secular law. Both laws criminalize same-sex relations. If the men are found guilty under Nigerian law, they may face up to 14 years in prison. If found guilty under Sharia, they may face the death penalty.

Schools were open in 2021 following extended closures in 2020 to control the spread of Covid-19. Before the pandemic, an estimated 10.5 million children were out of school, although primary education is supposedly free and compulsory. Successive kidnappings of school children in northern parts of the country have also seriously impacted education. Girls who are not in school are often married off at an early age and the varied adoption or lack of legislation against child marriage presents opportunities for families to force their daughters into early marriage. In October, the Nigerian government hosted the fourth international Safe Schools Conference, which aimed to galvanize action on protecting education from attack.

In August, Nigeria received the first 6 of 12 “Super Tucano” light attack aircrafts sold by the United States government. The sale is the largest foreign military sales program in Sub-Saharan Africa by the US, valued at almost US$500 million. It was approved by the Trump administration in 2017 after the Obama administration held up the deal due to human rights concerns. In July 2021, US lawmakers paused another proposed sale of 12 AH-1 Cobra attack helicopters and accompanying defense systems to the Nigerian military, worth about $875 million, citing human rights concerns.

In August, Nigeria and Russia signed a military cooperation deal which provides a legal framework for the supply of equipment and the training of troops in Nigeria.

During his address at the UN General Assembly, President Muhammadu Buhari pledged his support to the efforts of ECOWAS to address the trend of coups in West Africa and called on leaders to adhere to their countries’ constitutional term limits, noting that failure to do so generates crises and political tensions.