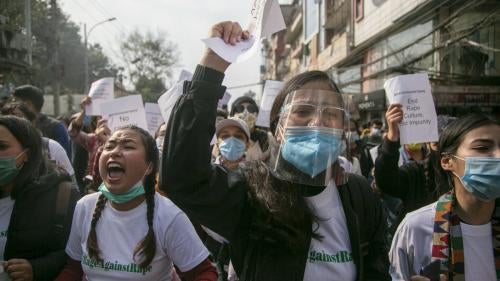 Inadequate and unequal access to health care in Nepal was exacerbated in 2021 by government failures to prepare or respond effectively when the Covid-19 pandemic surged, leading to many preventable deaths.

A pervasive culture of impunity continues to undermine fundamental human rights in the country. Ongoing human rights violations by the police and army, including cases of alleged extrajudicial killings and custodial deaths resulting from torture, are rarely investigated, and when they are, alleged perpetrators are almost never arrested.

Serious rights challenges remained unaddressed for months in 2021 during internal political infighting, the government was largely paralyzed by a struggle over the post of prime minister and repeated dissolutions of parliament. After the Supreme Court ordered in July that Sher Bahadur Deuba replace K.P. Oli as prime minister, the positions of health and education minister were left vacant for three months.

Both the Oli and Deuba governments continued to block justice for conflict-era violations. The mandates of the two transitional justice commissions were once again extended, although neither has made progress since being established in 2015 to provide truth to victims, establish the fate of the “disappeared,” and promote accountability and reconciliation.

In March the government signed a peace agreement with a banned Maoist splinter group, the Nepal Communist Party (NCP), after it agreed to renounce violence.

During a major wave of Covid-19 infections, which peaked in May, senior health officials described a system at the breaking point, with patients dying due to lack of bottled oxygen.

The government had failed to prepare for the scale of the outbreak. The situation was made worse by a shortage of vaccines, reflecting both global scarcity—wealthy governments blocked an intellectual property waiver that would have allowed for increased international production of vaccines and failed to require more widespread technology transfers—and delays in procurement by the government amid allegations of corruption. Those living in poverty, and members of marginalized social groups, were often least able to obtain treatment, and most vulnerable to economic hardship resulting from lockdowns.

After decades of progress in maternal and neonatal health, there was a substantial drop in the number of births at health facilities, which were overstretched by the pandemic. This was accompanied by increases in neonatal deaths, still births, and pre-term births.

Nepal had made progress in reducing child labor in recent years, but the economic impact of the Covid-19 pandemic, together with school closures and inadequate government assistance, pushed children back into exploitative and dangerous child labor.

The Truth and Reconciliation Commission (TRC) and the Commission of Investigation on Enforced Disappeared Persons (CIEDP) were established in 2015, but despite receiving over 60,000 complaints of abuses committed during the 1996-2006 conflict, they have made no progress.

Successive governments have promised to bring the Enforced Disappearances Enquiry, Truth and Reconciliation Commission Act (2014) into conformity with international law as directed by the Supreme Court in 2015 but have failed to do so. The Office of the UN High Commissioner for Human Rights (OHCHR) has criticized the act for failing to comply with Nepal’s international legal obligations by giving the commission powers to recommend amnesties for gross violations of international human rights law and serious violations of international humanitarian law, avoiding or delaying criminal prosecutions, and failing to ensure independence and impartiality. The United Nations and international community therefore do not support these commissions.

Meanwhile, the authorities have prevented cases of conflict era violations from being heard in the regular courts on the grounds that they will be addressed by the transitional justice process, although no meaningful or credible transitional justice process exists. Victims’ groups have long called for the government to consult with victims before reappointing commissioners, but one of the first actions of Sher Bahadur Deuba upon becoming prime minister in July 2021 was to extend the commissioners’ terms for another year.

Survivors of sexual violence committed during the conflict suffered from a particular lack of support or interim relief.

Impunity for human rights abuses extends to ongoing violations, undermining the principles of accountability and rule of law in post-conflict Nepal. In October, police shot dead four people in Rupandehi district while attempting to evict landless settlers from government land. UN rights experts have repeatedly raised cases of killings by the security forces but none have led to prosecutions, although the government acknowledged that one victim had been tortured in police custody.

A partial exception was the case of Rajkumar Chepang, who died in July 2020 after being tortured by soldiers guarding Chitwan National Park. In July 2021 a soldier was found guilty by Chitwan district court, in what is believed to be the first successful prosecution for torture in Nepal since it was criminalized in domestic law in 2018. However, he was sentenced to only nine months in jail.

In December 2020, the then government of K.P. Oli amended the law governing the Constitutional Council, which makes appointments to the National Human Rights Commission, and then appointed new human rights commissioners without proper consultation with opposition members. Because parliament was dissolved, the new commissioners were sworn in without parliamentary approval.

The same process was used to make other appointments, including to the Election Commission.

In October 2021 police detained a human rights defender, Ruby Khan, on false charges of “polygamy,” and initially defied a Supreme Court habeas corpus order to release her, after she led a protest demanding police investigate the alleged murder of two women.

Nepal has one of the highest rates of child marriage in Asia, with 33 percent of girls marrying before 18 years and 8 percent married by age 15. Among boys, 9 percent marry before the age of 18. This situation worsened during the pandemic, as children were pushed out of education and families faced increased poverty.

Nepal’s 2006 Citizenship Act, as well as the 2015 constitution, contain provisions that discriminate against women. A draft bill to amend the Citizenship Act, first presented to parliament in 2018, retains several discriminatory provisions. In September 2020, three UN human rights experts wrote to the government raising concerns that “the bill would continue to discriminate systematically against women, regarding their ability to transmit citizenship through marriage and to their children.” Due to flawed citizenship laws, an estimated 5 million people are forced to live without citizenship and are at risk of statelessness.

Reported cases of rape continued to sharply increase in 2021, but the police were often reluctant to register cases and investigations were frequently ineffective, resulting in widespread impunity for sexual violence.

The bill to amend the Citizenship Act also contains a clause that would require transgender people to provide “proof” of their transition to access citizenship documents according to their gender identity—which violates international human rights law and a 2007 Nepal Supreme Court judgment mandating that gender identity be recognized based on “self-feeling.”

While Nepal was among the first countries in the world to protect social and political rights for LGBT people—including legal recognition of a third gender—cases of discrimination and police abuse continue.

Caste-based violence and discrimination against Dalits are rarely investigated or prosecuted, despite the adoption of the Caste-based Discrimination and Untouchability (Crime and Punishment) Act in 2011. Two emblematic cases of caste-based killings committed on May 23, 2020, are yet to be prosecuted. One involved the death of a 12-year-old Dalit girl a day after she was forced to marry her alleged rapist, and the second, the killing of six men in Rukum West district after a young Dalit man arrived to marry his girlfriend from another caste.

Nepal’s most important international relationships are with neighbors India and China, which compete for influence in Nepal. Both provided vaccine and other assistance to help Nepal cope with the pandemic, although India failed to keep up supplies during a surge in cases in early 2021 as it battled a devastating second wave of its own.

Nepal is a participant in the Chinese government’s “Belt and Road Initiative.” It continues to restrict free assembly and expression rights of its Tibetan community under pressure from Chinese authorities.

The Nepal government remains dependent for much of its budget on international development aid. Several of Nepal’s donors have funded programs for many years intended to support respect for human rights, police reform, access to justice, and respect for the rule of law, but have not pressed the government to advance transitional justice or end the impunity of the security forces.

Nepal is serving a second consecutive term on the UN Human Rights Council from 2021-2023.