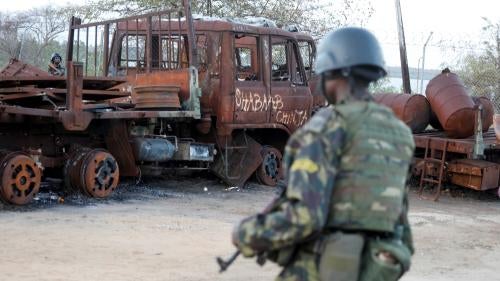 The human rights situation in Mozambique worsened in 2021, largely because of the ongoing violence in the northern Cabo Delgado province. The humanitarian crisis in the province also deteriorated due to insecurity and violence, causing the displacement of over 800,000 people. The armed group locally known as Al-Shabab or Al-Sunna wa Jama’a (ASWJ), which is linked to the Islamic State (ISIS), continued to attack villages, kill civilians, kidnap women and children, as well as to use boys as soldiers in its fight against government forces. State security forces were implicated in human rights abuses, including intimidation, sexual exploitation of displaced women, and the unlawful use of force against civilians.

International partners, including Rwanda, the Southern African Development Community (SADC), Portugal, the United States, and the European Union responded to the Mozambican government’s request for military assistance in operations against ASWJ in Cabo Delgado.

The humanitarian situation in Cabo Delgado province continued to deteriorate due to intensified fighting between government security forces and ASWJ. As of September 2021, the Mozambican government and the United Nations Refugee Agency, UNHCR, estimated that over 800,000 people had been internally displaced. Of these, about 48 percent were children, and over 84 percent lived in temporary accommodation and host communities across the country, while over 9 percent were in camps in Cabo Delgado, Niassa and Nampula provinces. The number of internally displaced people (IDPs) increased considerably in March, when more than 88,000 people fled Palma town, following a major attack by ASWJ. Many of the fleeing civilians sought refuge in Quitunda village, about five kilometers from Palma, where they lacked water, food, and other basic services.

In July, the UN World Food Programme  (WFP) warned that northern Mozambique’s displacement crises risked becoming a hunger emergency as more families continued to flee violence. As in the previous year, humanitarian groups were unable to reach communities most affected by the violence. The WFP suspended food distribution to Palma district in March due to security risks. Provision of assistance to displaced people in isolated areas in Palma, Macomia, Mocimboa da Praia, Muidumbe, and Quissanga districts only resumed in September, when access to the region improved.

In September, allegations reemerged of sexual exploitation and abuse of women in exchange for humanitarian aid. An investigation by Mozambique’s Centre for Investigative Journalism found that some aid workers demanded money or sex before distributing food parcels to women in various internally displaced persons’ camps across Cabo Delgardo province. As of October, the government had not shown any public commitment to investigate these allegations.

State security forces were implicated in human rights violations during counterterrorism operations in northern Cabo Delgado province, including intimidation, ill-treatment of displaced people, and use of unlawful force against civilians. Government soldiers prohibited people who fled the ASWJ Palma attack to Quitunda from leaving the village, and physically assaulted those caught trying to flee. A number of displaced people also accused government forces deployed to Palma of forcing distressed residents to pay bribes to get space on rescue flights. As of October, the government had not taken any publicly known step to investigate those abuses or punish those implicated.

State security forces were also implicated in abuses outside the conflict zone, including against imprisoned women. In July, a commission of inquiry set up by the Ministry of Justice confirmed sexual exploitation and other rights violations against female inmates by guards at the Ndlavela Women's Prison in Maputo. The commission was set up following a report by the Centre for Public Integrity (CIP), a Mozambican anti-corruption organization that reported that prison guards took women inmates outside the prison and forced them “to have sexual relations with strangers outside the prison.” The Commission recommended, among other things, prison legislation reform that explicitly criminalizes sexual relations between inmates and guards, and that women prisoners should be supervised only by women guards.

ASWJ continued to attack villages, kill civilians, kidnap women and children, and train boys to fight government forces. On March 24, the group raided the town of Palma, killing and injuring an unknown number of civilians, some in their homes, and displacing thousands. The group was also implicated in the kidnapping of boys and subsequently using them to fight government forces in violation of the international prohibition on the use of child soldiers. On October 5, the United Nations Children’s Fund, UNICEF raised concerns that the insurgents were training and indoctrinating boys to fight in Cabo Delgado.

Human Rights Watch found evidence that ASWJ fighters are using hundreds of kidnapped women and girls, in child and forced marriages, and as sex slaves. The group released others after their families paid huge sums of money in ransom. In October, the British Broadcasting Corporation reported that joint Mozambican and Rwandan forces had freed an unknown number of women who were rescued from captivity.

Attacks on Refugees and Asylum Seekers

In June, the Mozambican government announced that Tanzania would not create a refugee camp to accommodate Mozambicans fleeing violence in Cabo Delgado. The government spokesman said the two governments had agreed that fleeing citizens would be repatriated to Mozambique. These people have continued to be forcibly returned by Tanzanian authorities. As of September, according to UNHCR, more than 10,300 asylum seekers had been sent back to Mozambique since the start of the year. Tanzania’s actions violated the principle of non-refoulement, which prohibits forcibly returning people to threats to their lives or freedom.

Mozambican authorities failed to protect Rwandan asylum seekers in the country from attacks, and on at least one occasion were implicated in the enforced disappearance of a Rwandan national. Although the authorities denied knowledge of the whereabouts of Cassien Ntamuhanga, a Rwandan asylum seeker who disappeared on May 23, four witnesses told Human Rights Watch that they saw seven uniformed agents of the Mozambican National Criminal Investigation Service (SERNIC) arrest and take Ntamuhanga to the local police station on Inhaca island. Ntamuhanga’s whereabouts remained unknown at time of writing.

On September 13, Révocat Karemangingo, a prominent member of the Rwandan refugee community in Mozambique, and former Rwandan army official, was shot dead by unknown individuals. In October, the Mozambican Human Rights Defenders Network, (RMDDH), denounced threats from unknown individuals against a Rwandan refugee known as Innocent Abubakar. In September, members of the Rwandan community in Mozambique told journalists that they lived in fear following the killing of Karemangingo.

The number of unresolved cases of kidnappings, including of businesspeople or their relatives, continued to increase in 2021, and police officers were implicated in at least one case. In June, according to media reports, the National Criminal Investigation Service (SERNIC) announced the detention of five people including one SERNIC agent and a policeman, in connection with the kidnapping of a businessman, Kapil Rajas. The ransom of US$600,000 demanded had not been paid when the police rescued Rajas and arrested three of his kidnappers. In August, the National Human Rights Commission reportedly urged the purging of Defense and Security Forces (FDS) ranks to prevent security forces from facilitating or covering up kidnapping crimes.

At least six other kidnapping cases remained unresolved as of October, with three of them, including the case of a Portuguese national, happening within five days. The police said families of the victims refused to cooperate with authorities, choosing to pay ransom for their release while police investigation was ongoing. Earlier in April, Mozambique’s attorney general, Beatriz Buchilli, expressed concerns about increasing numbers of kidnapping cases, noting difficulties in resolving the existing 16 cases reported in 2020. In October, the Confederation of Business Associations of Mozambique (CTA), said kidnappings were “negatively affecting the business environment and private investment in Mozambique.”

Various international partners responded to the Mozambican government request for support in its military operations against ASWJ in Cabo Delgado. In May, Portugal signed a five-year military cooperation agreement with Mozambique that includes a training mission of 60 troops.

In July, Rwanda responded with the deployment of 1,000 soldiers and policemen to Cabo Delgado. A month later, the two governments reported that their joint forces had recovered control of Mocimboa da Praia, a town seized and occupied by insurgents since August 2020. Also in July, the European Council adopted a decision setting up an European Union military training mission in Mozambique to support government forces in the protection of civilians and restoration of safety and security in the Cabo Delgado province.

In September, United States special forces conducted an exercise with Mozambican troops which the US said incorporated components of human rights, the laws of war, protection of civilians, and engagement with civil society.

In October, SADC extended indefinitely its SADC Mission in Mozambique (SAMIM), which it launched in July for an initial three-month term. The mission’s troop contributing countries include South Africa, Botswana, Tanzania, and Angola.