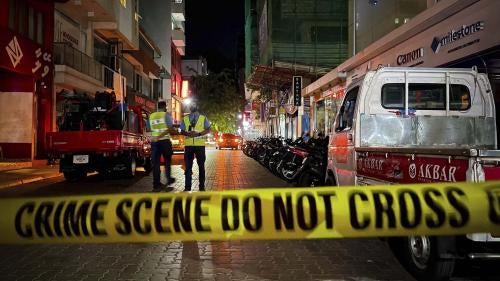 The Maldives government of President Ibrahim Mohamed Solih took steps to end repressive restrictions on the media and speech in 2021, and made some progress addressing protection needs of migrant workers. However, the government failed to reform abusive laws, including on freedom of assembly, and blocked a number of protests.

The authorities also failed to ensure justice in cases of violence against women and girls, which rights groups criticized.

Authorities have also done little to address threats posed by extremist Islamist groups that have targeted politicians and activists. On May 6, 2021, parliament speaker and former President Mohamed Nasheed, accused of being an apostate by his opponents, was targeted in a bomb attack. Nasheed survived critical injuries from the explosion that also injured bystanders and members of his security detail.

A government-appointed commission investigating deaths and enforced disappearances failed to make significant progress in investigating violent attacks on activists and politicians, including journalist Ahmed Rilwan who disappeared in 2014 and blogger Yamin Rasheed who was killed in 2017. The commission recommended that the police file charges against former Vice President Ahmed Adeeb for interfering in the investigation and protecting alleged perpetrators. However, as of November the police had not charged Adeeb. The authorities appeared to stall prosecutions in other cases investigated by the commission.

In January 2021, the government established the Ombudsperson’s Office for Transitional Justice, tasked with conducting criminal investigations and prosecutions for state-led atrocities from 1953 to 2018. As of October, there were no updates regarding its investigations.

Roughly one-third of the population in the Maldives comprises foreign migrant workers, at least 60,000 of them undocumented. The vast majority work in the construction and tourism industries.

In August, Member of Parliament Ahmed Riza was charged with human trafficking for the purpose of labor exploitation. The case first came to light in July 2020 when workers on Bodufinolhu island, a tourist resort, protested months of non-payment.

While the Maldives made progress on its anti-human trafficking efforts and was upgraded to Tier 2 on the US State Department’s Trafficking in Persons report in 2021, the government failed to implement adequate measures to identify and support trafficking victims or investigate and prosecute perpetrators. A draft bill is pending in parliament to bring the existing Anti-Human Trafficking law in compliance with the United Nations Protocol to Prevent, Suppress and Punish Trafficking in Persons.

The Solih government has taken steps to end repressive restrictions on the media and speech. According to the Reporters Without Borders’ World Press Freedom Index, Maldives rose to a ranking of 72 in 2021 from 120 in 2018.

However, the government has not effectively confronted threats by Islamist groups targeting activists and civil society organizations. In August 2021 a social media campaign targeted the local chapter of Transparency International, Transparency Maldives, calling for it to be banned and accusing the government of colluding with civil society to “make the Maldivian education system secular.” This followed an announcement by Ministry of Education that it was partnering with Transparency Maldives.

The Maldives experienced a surge in Covid-19 cases in 2021. About 18 percent of the confirmed cases were among migrant workers, who also had to cope with economic hardship due to non-payment of wages.

The government provided vaccinations free of charge to everyone residing in the Maldives, including migrant workers, including those without documentation.

Despite the findings by an expert committee pointing to unhealthy conditions and overcrowding in prisons, the government did not enforce its recommendations to improve hygiene. In September, Maafushi Prison was brought under a state of emergency after a corrections officer contracted Covid-19, leading to fear of an outbreak.

Although it acknowledged increased threats from climate change, the Solih government failed to adequately enforce environmental protection laws and launched reclamation projects that risked environmental harm, something the ruling party had criticized while in opposition. In September, the citizen-led environmental group Save Maldives sought a civil injunction to stop the government’s development project in Gulhifalhu lagoon, arguing that it would destroy environmentally protected areas in violation of Maldivian law.

The government has yet to fulfill its pledge to restore the Environmental Protection Agency as an independent entity. Environmental impact assessments for new projects often lack genuine consultations with communities and proposed mitigation measures are rarely implemented.

The Human Rights Commission of the Maldives (HRCM) launched an investigation into claims that a suspect arrested on terrorism allegations was tortured in prison. The police admitted that they had used pepper spray on him.

While hundreds of complaints of torture and ill-treatment have been filed with government commissions since the Anti-Torture Act was passed in 2013, none have led to the prosecution of officials or redress for victims.

A March 2021 UN report analyzing reporting of gender-based violence in 2020 found that confinement in the home with abusers, financial insecurity, and other problems exacerbated by lockdown restrictions contributed to an escalation of reported cases of abuse. In April, protests broke out across Malé, the capital, in response to an increase in reported incidents of sexual assault and domestic violence.

In February, Gender Minister Aishath Mohamed Didi and four women parliamentarians joined civil society groups in condemning the authorities for allowing the former tourism minister, Ali Waheed, to travel to the United Kingdom despite the fact that he was on trial at the time for multiple charges of sexual assault against ministry employees. Waheed was arrested and is currently detained in the UK.

The Maldivian penal code criminalizes adult, consensual same-sex sexual conduct; punishment can include imprisonment of up to eight years and 100 lashes, and applies equally to men and women. Same-sex marriage is outlawed and punishable by up to a year in prison. Extremist groups in the Maldives use social media to harass and threaten those who promote the rights of lesbian, gay, bisexual, and transgender (LGBT) people.

United States Ambassador to Maldives Alaina Teplitz made an official visit in January 2021; in the same month the US and Maldives held their first ever meeting on defense and security cooperation. In June, US Under Secretary of Defense Policy Colin Kahl spoke by phone with Maldivian Foreign Minister Abdulla Shahid about furthering security cooperation and countering the threat of violent extremism.

In a phone call with Chinese President Xi Jinping in June, President Solih committed to continuing cooperation on development projects. China agreed to a Covid-19 related postponement of loan repayments; the Maldives is significantly in debt to China.

In August, India signed a contract to build a series of bridges linking Malé with neighboring islands. The $500 million Greater Malé Connectivity Project is described as the "largest-ever” infrastructure project in the Maldives.

In July, the Maldives was taken off the “Human Rights Priority Countries” list compiled by the Foreign, Commonwealth and Development Office of the United Kingdom.

In September, the Maldives endorsed the intergovernmental Safe Schools Declaration.