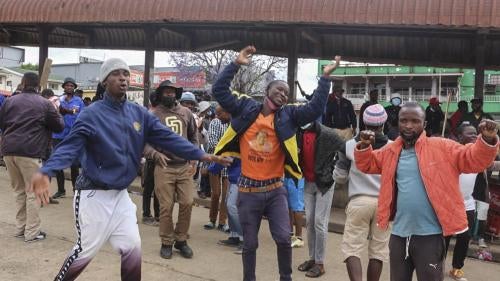 In 2021, Eswatini, an absolute monarchy ruled by King Mswati III since 1986, was rocked by waves of protests amid a drastic deterioration in the human rights situation and lack of reforms. The authorities responded by banning protests and deployed police and soldiers who shot at protesters indiscriminately with live ammunition.  A 1973 decree banning political parties remains in force. Despite the adoption of the 2005 constitution which guarantees basic rights and the country’s international human rights commitments, the king continues to exercise absolute power to appoint the prime minister and cabinet, and to dissolve the Parliament.

In June, violent protests triggered by the king’s decree banning petitions to the government calling for democratic reforms broke out across the country. At least 50 people were killed and property worth an estimated R3 billion (US$19.4 million) was looted or damaged. The waves of protests began in May 2021, when students and teachers protested the killing of Thabani Nkomonye, a law student at the University of Swaziland. The killing was allegedly committed by the police. The authorities initiated an investigation into the killing, but protests escalated in late June when about 500 youths took to the streets in the Manzini district, 30 kilometers from the capital, Mbabane. The government has yet to ratify the Optional Protocol to the Convention Against Torture, despite previously agreeing to do so.

Restrictions on freedom of association and assembly continued in 2021. The Eswatini authorities have used the Suppression of Terrorism Act of 2008 (Terrorism Act) and the Sedition and Subversive Activities Act of 1938 (Sedition Act) to suppress free speech and stifle criticism of the monarch. On July 25, the police arrested two Eswatini members of parliament (MPs) and charged them with terrorism for allegedly encouraging the protests and calling for a democratically elected prime minister and other reforms. The two MPs, Mduduzi Bacede Mabuza and Mthandeni Dube, remain in custody after the High Court of Eswatini denied their bail application twice. At the time of writing, the trial had yet to commence.

Rule of Law and Media Freedoms

There has been no progress on essential rights reforms, including the removal of all legislative and practical restrictions to free exercise of civil and political rights. This would include the repeal or amendment of laws that obstruct the rights to freedom of association and expression, that would allow the registration and operation of political parties; introducing greater political freedoms through free, fair, transparent democratic elections; ensuring the right to health without discrimination on the basis of sexual orientation or gender identity; abolition of the death penalty; and decriminalization of same-sex relations and the prevention of discrimination based on marital status and sexual orientation.

Restrictions on freedom of association and assembly remained in place and there were no remedies for violations that occurred in previous years. On October 20, 2020, the High Court heard a challenge by the Eswatini Sexual and Gender Minorities (ESGM), a human rights community-based advocacy organization which aims to advance the protection of human rights of lesbian, gay, bisexual, transgender, and intersex persons. In September 2019, the Eswatini Registrar of Companies had refused to register ESGM as a company saying that “ESGM’s objectives were unlawful because same-sex sexual acts are illegal in the country.” At the time of writing the court has not rendered its judgment.

In 2021, Eswatini ranked 141 out of 180 countries in the Reporters Without Borders’ world press index on media freedom, based partly on constraints journalists face under the absolute monarchy and because courts are not permitted to prosecute crimes and abuses against representatives of the monarchy. In June, the Eswatini Communications Commission allegedly ordered network providers, Eswatini Post and Telecommunications, Eswatini MTN and Eswatini Mobile to shut down the internet to prevent protesters from mobilizing online. Local activists in Eswatini told Human Rights Watch that the internet was shut down for several hours, from about 4:30 p.m. local time on June 29 until around 9 a.m. on June 30.

On June 30, media groups African Freedom of Expression Exchange (AFEX), Collaboration on International ICT Policy for East and Southern Africa (CIPESA), International Freedom of Expression Exchange (IFEX), Panos Institute Southern Africa, and the Media Institute of Southern Africa (MISA) sent a joint petition to the acting Prime Minister Themba Masuku calling on him to ensure that the internet, social media platforms, and all other communication channels are open, secure, and accessible regardless of the protests then taking place in the country.

The under-representation of women in leadership and decision-making positions in both public and private sectors continued, with little effort to implement provisions of the 2018 Election of Women Act. The Act is designed to ensure the fulfillment of the constitutional requirement of representation quotas for women and marginalized groups in parliament.

While it is yet to ratify the Protocol to the African Charter on Human and Peoples' Rights on the Rights of Women in Africa (Maputo Protocol), Eswatini has ratified some regional and international instruments to promote gender equality. These include the Convention for the Elimination of All Forms of Discrimination Against Women (CEDAW), which Eswatini ratified without reservation and the Southern African Development Community (SADC) Declaration on Gender and Development. Article 20 of the Constitution provides for equality before the law and non-discrimination on several protected grounds, but does not include discrimination on the basis of language, sexual orientation, or gender identity. Eswatini’s dual legal system where both the common law, which is based on Roman Dutch law and Eswatini unwritten customary law operate side by side, has resulted in conflicts, resulting in numerous violations of women’s rights over the years.

Schools were closed for 237 days, and partially open to certain ages or in certain areas, for 159 days since the pandemic’s start in 2020. In 2021, 350,000 students were affected. Before the pandemic, 16 percent of children were out of primary school.

In July, the Southern African Development Community (SADC) Chairperson of the Organ Troika on Politics, Defence and Security, deployed two fact finding missions to investigate the causes of the protests and help find peaceful resolution to the political crisis in the country. SADC appealed for calm and restraint from all the stakeholders in Eswatini, and encouraged national dialogue.

South Africa’s Minister of International Relations and Cooperation, Naledi Pandor, who was part of the delegation, expressed disappointment over the Eswatini fact-finding mission. Pandor said, “I was quite disappointed, we were on a fact-finding mission and what we found in Swaziland [Eswatini] was that our colleagues in government essentially wanted government to brief us when we wanted a wider set of briefing as we wished to speak to the broader stakeholders including non-government stakeholders.” The reports of the SADC fact-finding missions were not made public.

In July, the Commonwealth secretariat issued a statement calling for calm and restraint and urging all political and civic leaders to demonstrate tolerance, to promote unity, and give a chance to peaceful channels to address any grievances. It said its Secretary-General will continue to work with regional and international partners to encourage constructive dialogue and appropriate demarches founded on the rule of law as a means to foster sustainable peace.

Also, in response to the violent protests, the United Nations Secretary-General António Guterres called on the Eswatini authorities to ensure people are able to exercise their civil and political rights peacefully and urged the security forces to exercise utmost restraint. The UN office of the high commissioner for human rights urged the government to “ensure that there are prompt, transparent, effective, independent and impartial investigations into all allegations of human rights violations”.