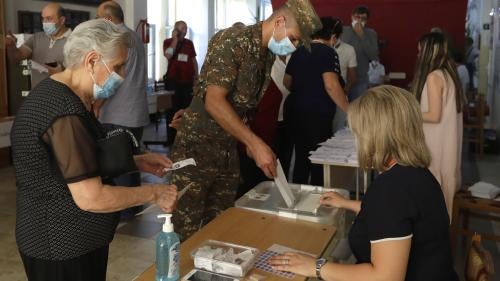 The 2020 truce ending the six-week war between Armenia and Azerbaijan in and around Nagorno-Karabakh largely held, but periodic skirmishes made for a fragile situation on the post-war front lines.

The political crisis following the defeat of ethnic Armenian forces was largely defused in the June snap election, which resulted in a decisive victory for the ruling party and reconfirmation of Nikol Pashinyan as prime minister. International observers found the polls genuinely competitive and in line with international standards.

Domestic violence, discrimination against people with disabilities, barriers to effective pain treatment and palliative care, and violence and discrimination based on sexual orientation and gender identity persisted. Striving to fight rising incidents of hate speech, authorities introduced regulations which may undermine freedom of speech.

Ethnic Armenian prisoners continued to be detained and prosecuted by Azerbaijan. In September 2021, the Armenian Ombudsman’s Office stated that at least 41 prisoners of war (POWs) and 4 civilian detainees remain in Azerbaijani custody. Numerous Armenian POWs were subjected to cruel and degrading treatment and torture by Azerbaijani forces either when they were captured, during their transfer, or while in custody at various detention facilities. (See Azerbaijan chapter). In 2021, nearly 100 Armenian POWs and civilian detainees were returned by Azerbaijan.

The fighting compounded the loss of education due to Covid-19-related school closures. According to official data, at least 71 schools were damaged or destroyed on the Armenian side and 54 on the Azerbaijani side.

Ongoing incidents of military hostilities threaten the safety and livelihoods of civilians residing in villages in Nagorno-Karabakh and along the Armenia-Azerbaijan border, mostly on the Armenian side. Russian peacekeepers reported the October 9 killing of a civilian in Martakert (Aghdara) district, while he was farming, due to gunfire from the Azerbaijani side. With no independent human rights monitoring in Nagorno-Karabakh, there is no mechanism to address problems arising from cross-border shootings and other insecurities.

In August, the Azerbaijani prosecutor-general's office said that since the ceasefire, 23 Azerbaijani civilians were killed and 36 were injured by anti-personnel and anti-vehicle mines laid in areas over which Azerbaijan re-established control. Among them were two Azerbaijani journalists and a local official, who were killed on June 4. Landmine contamination in all of the seven regained regions around Nagorno-Karabakh is reported to be extensive and widespread. In July, Armenia handed over landmine maps, detailing the location of around 92,000 anti-vehicle and anti-personnel mines in Fizuli and Zangelan regions; Azerbaijan handed over 15 captured Armenian soldiers in exchange for the maps. Neither Armenia nor Azerbaijan have ratified the international treaty prohibiting antipersonnel landmines.

A report by International Partnership for Human Rights, an independent group, on international humanitarian law violations during the Nagorno-Karabakh war, found “prima facie evidence of two extrajudicial executions of wounded Azerbaijani combatants by Armenian/Nagorno-Karabakh soldiers.” It also documented the ill-treatment, including torture, of seven Azerbaijani POWs by these forces. (See Azerbaijan chapter for allegations of executions of Armenian troops by Azerbaijan forces).

Human Rights Watch is not aware of any investigations by Armenian authorities into alleged war crimes committed by Armenian forces during the war.

Accountability for Law Enforcement Abuse and Torture in Custody

Torture and ill-treatment in custody remains a problem and it is often perpetrated with impunity. Even when criminal investigations are launched in response to allegations of torture, they are rarely effective.

According to Helsinki Citizen’s Assembly Vanadzor (HCAV), a local non-governmental organization, criminal investigations are mostly closed on the basis of findings that no crime was committed or suspended for the lack of a suspect. The group reported that no one has been convicted for torture since 2015, when torture became a specific offense. In all instances in which officials were held accountable for acts of physical abuse, they were convicted for general “abuse of office” offenses.

Freedom of Speech and Protection of Human Rights Defenders

The recent war and political crises triggered heated public debates, which often included inflammatory speech by members of parliament and other public officials that was at times directed against human rights defenders and activists. The government undertook several attempts, including by introducing legislative amendments, to tackle the spread of hateful and degrading speech.

During the first six months of 2021, the Committee to Protect Freedom of Expression, a local media advocacy group, documented 15 cases, with 17 victims, of physical violence against journalists perpetrated by both public officials and private individuals.

During a parliamentary session on August 11, the speaker of parliament forbade journalists from filming a quarrel between pro-government and opposition parliamentarians. Special forces ordered journalists to stop filming, and then ordered them out of their gallery in parliament.

Authorities pursued spurious criminal incitement charges against Sashik Sultanyan, the chairperson of a nongovernmental group, Yezidi Center for Human Rights. The charges stem from an interview Sultanyan gave to the website Yezidinews.am, where he alleged discrimination of Yezidi minorities in Armenia. The National Security Service, which brought the charges, wrongly characterized as “incitement” Sultanyan’s interview, which was protected speech. The court review was pending at time of writing.

Children with disabilities also frequently remain in institutions indefinitely when they become adults, stripped of their legal capacity and right to independent living. Adults with psychosocial or intellectual disabilities can be deprived of legal capacity, or the right to make decisions, and Armenia lacks supported decision-making mechanisms.

In May, parliament adopted the Law on the Rights of Persons with Disabilities, which includes guarantees of accessibility, independent living, and access to justice, and bans disability-based discrimination. The new law, however, does not create a dedicated body to oversee the law’s implementation.

Violence against Women and Children

Domestic violence remains a persistent problem. Domestic violence cases are largely underreported. According to official data, during the first six months of 2021, authorities investigated 326 criminal domestic violence complaints. Of the 326, charges were brought against 145 persons, and in 90 of those the husband was identified as the alleged perpetrator.

The 2017 family violence law requires police to urgently intervene “when there is a reasonable assumption of an immediate threat of repetition or the continuation of violence” in the family. But in practice, law enforcement bodies lack awareness and training on protection mechanisms included in the law, such as protection orders, and do not adequately apply or enforce them.

There are only two domestic violence shelters, both in the capital, Yerevan, run by nongovernmental organizations, each with a capacity for five women and their children. This is far below the Council of Europe standard of one shelter space per 10,000 people. Armenia also lacks a general hot-line service for survivors of domestic violence.

Armenia signed the Council of Europe Convention on Preventing and Combating Violence against Women and Domestic Violence (Istanbul Convention) in 2018, but the ratification process remained stalled.

Lesbian, gay, bisexual, and transgender (LGBT) people in Armenia continue to face harassment, discrimination, and violence. The criminal code does not recognize animus due to sexual orientation or gender identity as aggravating criminal circumstances in hate crimes.

Fear of discrimination and possible humiliation due to public disclosure of their sexual orientation or gender identity prevent many LGBT people from reporting crimes against them, even when these are clearly motivated by anti-LGBT bias. But even when reported, investigations into such crimes are often inconclusive or ineffective.

PINK Armenia, an LGBT rights group, documented 12 incidents of physical attacks based on sexual orientation or gender identity from January through August 2021, and eight cases of threats and calls for physical and psychological violence. In 13 cases, violence and threat of violence was committed by a family member.

Victims of four attacks filed complaints with the police, who dismissed three of them claiming no crime had been committed. PINK Armenia has no information about the fourth. Police issued warnings in two of the three cases in which the violence was committed by a family member, but did not issue any restraining measures.

During the pre-election period, politicians used homophobia to advance their campaigns by smearing LGBT people as a threat to the family, national identity, and national security. Some opposition forces accused civil society organizations of destroying national values and spreading LGBT “propaganda.”

Armenia does not have comprehensive anti-discrimination legislation.

The Minsk Group of the Organization for Security and Co-operation in Europe, co-chaired by the United States, France, and Russia, re-engaged on Nagorno-Karabakh negotiations. During 2021, the co-chairs issued several statements on the aftermath of the war, reiterating their willingness to visit the region and calling on the parties to return all POWs and other detainees; exchange “all data necessary to conduct effective demining of conflict regions” and lift “restrictions on access to Nagorno-Karabakh, including for representatives of international humanitarian organizations”; preserve and protect religious and cultural heritage; and foster “direct contacts and co-operation between conflict-affected communities.” After a long hiatus, the Minsk Group co-chairs met in New York during the UN General Assembly.

The European Union also called on the parties to refrain from military actions and called on Azerbaijan to release all prisoners of war and detainees.

A November 2021 memorandum by Council of Europe Commissioner for Human Rights Dunja Mijatović recommended, among other things, to “ensure free and unhindered access of humanitarian assistance and international human rights missions to all areas affected by the conflict.”

A September resolution by the Parliamentary Assembly of the Council of Europe called on Azerbaijani authorities to free all remaining prisoners and urged Armenian authorities to release all mine maps. It also called on the sides to ensure accountability for the crimes committed during the war.

In their August joint statement, the UN special rapporteurs on minority issues, on the situation of human rights defenders, and on the promotion and protection of the right to freedom of expression called on Armenia to drop charges against Sashik Sultanyan.

In its May report, the European Committee for the Prevention of Torture and Inhuman or Degrading Treatment criticized de facto detention of people with disabilities who remain in psychiatric facilities involuntarily due to the absence of appropriate community-based services.  The committee urged the government to prioritize these services and de-institutionalization.

The European Committee of Social Rights’ January conclusions criticized Armenia’s insufficient access to housing and public transportation for people with disabilities; failure to ban employment discrimination on grounds of sexual orientation; and the lack of an explicit statutory guarantee of equal pay for women and men for equal work.

In March, the EU-Armenia Comprehensive and Enhanced Partnership Agreement, which includes provisions on strengthening democracy, the rule of law and human rights, entered into force.

Also in March, US Secretary of State Antony Blinken stressed the importance of the rule of law and democratic institutions in a call with Prime Minister Pashinyan.