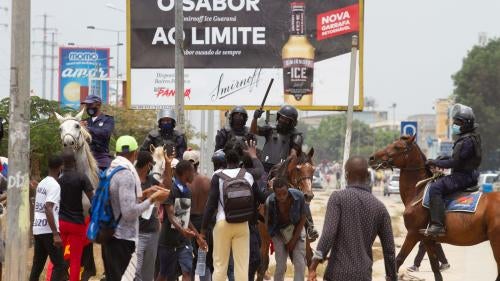 The human rights situation in Angola achieved one key improvement in 2021 with the entry into force of the new penal code. The code decriminalizes same-sex conduct, protects the rights of children in conflict with the law, criminalizes genital mutilation and sexual harassment, and expands the circumstances under which abortion is legally permitted. However, the government has made little progress on broader human rights issues. State security forces were implicated in serious human rights abuses, including summary executions, excessive use of force against peaceful protesters, and arbitrary detentions. Authorities also used draconian media laws to limit the work of journalists. Cases of sexual abuse of children continued to increase. Several provinces in southern Angola faced the worst drought in 40 years, causing over 1.3 million people to face hunger, with many crossing the border into Namibia in search of food.

Humanitarian Crisis in the Southern Region

Southern Angola faced the worst drought since 1981, which severely affected access to food in three provinces. The World Food Program (WFP) said that more than 1.3 million people in Cunene, Huila, and Namibe provinces faced severe hunger. Of those, 114,000 were children under the age of 5, who were suffering or likely to suffer from acute malnutrition. In March, the Namibian press reported that hundreds of Angolans fleeing the drought had crossed the border into Namibia in search of food.

In July, a local nongovernmental organization (NGO), the Association Building Communities (Associação Construindo Comunidades, ACC), called the situation “catastrophic,” and  urged the Angolan government to declare a state of emergency in the region. During a September visit of the Angolan President Joao Lourenço to the region, the governor of Cunene, Gerdina Didalelwa, said that the drought had caused a movement of people “never seen before,” with 4,000 people displaced within Cunene province and 2,000 to Namibia. In September, the Angolan government set up a task force largely made up of officials from government institutions to distribute humanitarian aid to victims of the drought.

Angolan state security forces continued to be implicated in serious human rights abuses, including summary executions, excessive use of force against peaceful protesters, and arbitrary detentions throughout 2021.

On January 30, police killed at least 10 protesters, when they indiscriminately fired at people who had peacefully gathered to demand better public services, such as water and electricity supply, in the diamond-rich town of Cafunfu, in Lunda Norte province. Following the violence, graphic video footage shared on social media showed uniformed Angolan police officers and soldiers walking among the dead and injured on a road, kicking and beating detainees. The Angolan police chief, Paulo de Almeida, initially  rejected calls for an independent investigation into alleged excessive use of force against protesters, but the police department later announced that two senior officers implicated in the violence had been dismissed. They were implicated in the mishandling of corpses and the mistreatment of detained protesters, including kicking and beatings.

In February, the Angolan NGO Mosaiko accused police of intimidating activists and religious missionaries in Lunda Norte, after officers prevented priests and Mosaiko activists from leaving their homes.

Authorities struggled to protect the rights of children, as cases of sexual abuse of children continued to increase. In June, the National Children’s Institute, INAC, revealed that over 4,000 children below age 14 had been sexually abused since June 2020. INAC said most of the victims were girls from Luanda, who were sexually abused by neighbors and family friends. Local children rights’ activists said official government numbers reflected only reported cases of sexual abuse. In many cases, abusers offer money to the family of the victim to convince it not to report such abuses or to close a criminal case.

In September, the Ministry of Social Action, Family and Women's Promotion disclosed the existence of a child prostitution network in the fishing village of Cahota, in Benguela province, allegedly controlled by Chinese migrants. Media reports had alleged that dozens of girls, some as young as 13, had become pregnant, and at least 17 girls had borne children to Chinese men, after being sexually abused. As of October, authorities had arrested at least one man in connection with the case, and police investigations were still ongoing. The government did not publicly disclose what type of assistance, if any, it had provided to the victims.

Before the Covid-19 pandemic, 18 percent of Angolan children were out of primary school. After the pandemic’s start in 2020, schools were closed for 195 days, and partially open to certain ages or in certain areas, for 106 days, affecting 8.7 million children. In 2021, schools were partially closed in January and February, but open for the remainder of the year.

Millions of Angolans across the country are still denied access to free, diverse, and impartial information, as Angola remained the only southern African country without community radio stations.

Authorities reduced the number of private television stations in April, when the Ministry of Telecommunications, Information Technologies and Social Communication announced the suspension of the licenses of three television channels, resulting in the loss of hundreds of jobs. The ministry said the media companies were operating under provisional registrations and would remain suspended until the regularization of their status. In August, Secretary of State for Social Communication Nuno Caldas Albina said that the media companies would not be allowed to resume any time soon, despite at least two of them having submitted the required documentation.

In a positive step, Angola’s new penal code, which came into force on February 10, no longer criminalizes consensual same-sex conduct. Parliament had passed the new legislation in January 2019 to replace the obsolete penal code of 1886, but the president did not sign it into law until November 2020.

The new penal code removed the contentious provisions that punished people who “habitually indulge in the practice of vices against nature," which targeted the lesbian, gay, bisexual and transgender community, and limited their access to employment, health care, and education. The new law prohibits violence and discrimination on the basis of sexual orientation among other things, including for employment, with a punishment of up to two years’ imprisonment.

Angola continued its efforts in conflict resolution and peace building across central Africa, playing leading roles in the Economic Community of Central African States, ECCAS, and the International Conference on the Great Lakes Region, ICGLR.

On July 27, Angola’s parliament approved the deployment of 20 officers and a transport aircraft to Mozambique as part of the Southern African Development Community (SADC) mission in support of Mozambique’s military operations against armed Islamist groups in its northern Cabo Delgardo province.

In September, following a meeting with Angolan President João Lourenço, United States National Security Adviser Jake Sullivan reaffirmed his support in resuming the US- Angola Strategic Dialogue as the centerpiece of bilateral engagement between the countries.

In his address at the 76th session of the United Nations General Assembly in September, President Lourenço pushed for universal and open access to Covid-19 vaccines to “allow for wider production and equitable distribution on a global scale.” He also called on the international community to take “appropriate and sufficient action” to discourage military coups in Africa, as was recently experienced in Mali and Guinea.