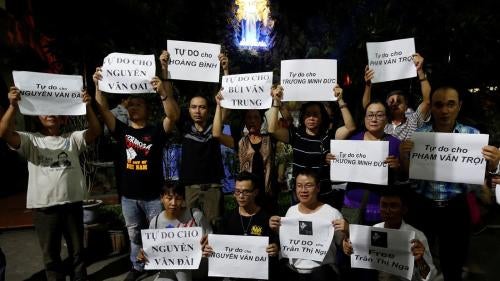 Restrictions on Freedom of Expression

Vietnam frequently used vaguely worded penal code provisions during the year to crack down on dissent, including “carrying out activities that aim to overthrow the people’s administration,” “undermining national great unity,” “conducting propaganda against the state,” and “abusing the rights to democracy and freedom to infringe upon the interests of the state.” Other laws, such as disrupting public order and resisting officials carrying out their public duty, are also used to repress exercise of basic civil and political liberties.

In June 2017, the National Assembly, which operates under the effective control of the ruling Communist Party, revised sections of the penal code to criminalize actions related to preparing to perform forbidden acts involving national security. Those found guilty face up to five years in prison. The revised penal code also holds lawyers criminally responsible if they fail to report their own clients to authorities for a number of crimes, including national security violations.

During 2017, authorities arrested at least 21 rights bloggers and activists, including former political prisoners Nguyen Bac Truyen, Truong Minh Duc, Nguyen Van Tuc, Nguyen Trung Ton, and Pham Van Troi, for exercising their civil and political rights in a way that the government views as threatening national security. At time of writing, at least 10 other people had already been put on trial, convicted, and sentenced to between 5 to 10 years in prison.

In June, a court in Khanh Hoa sentenced prominent blogger Nguyen Ngoc Nhu Quynh (also known as Mother Mushroom) to 10 years in prison for critical online posts and documents she published on the internet collected from public sources, including state-sanctioned media. In July, a court in Ha Nam province sentenced prominent activist Tran Thi Nga to nine years in prison for her internet posts.

Physical assaults against human rights activists occur frequently. In June 2017, Human Rights Watch published a report highlighting 36 incidents in which men in civilian clothes beat activists between January 2015 and April 2017, often resulting in serious injuries. Attacks by thugs on rights campaigners took place in many regions, sometimes in the presence of uniformed police who did nothing to stop the attacks.

A typical case occurred in February 2017, when a group of men in civilian clothes abducted former political prisoner Nguyen Trung Ton and his friend Nguyen Viet Tu off the street, dragged them into a van, and drove away. While in the van, the men stripped off Ton’s and Tu’s clothes, covered their heads with their jackets, threatened them, and repeatedly hit them with iron pipes before dumping them in a forest, far from where they had been seized. Nguyen Trung Ton required surgery at a local hospital for the severe injuries he incurred. Police failed to seriously investigate the case or apprehend any suspects. In July, Nguyen Trung Ton was arrested and charged with “carrying out activities that aim to overthrow the people’s administration.”

Restrictions on Freedom of Assembly, Association, and Movement

Vietnam prohibits the establishment or operation of independent political parties, labor unions, and human rights organizations. Authorities require approval for public gatherings and refuse permission for meetings, marches, or public assemblies they deem to be politically unacceptable. In September, police used excessive force while dispersing protesters in front of the entrance of a Hong Kong-owned textile factory in Hai Duong province. Many people were injured. 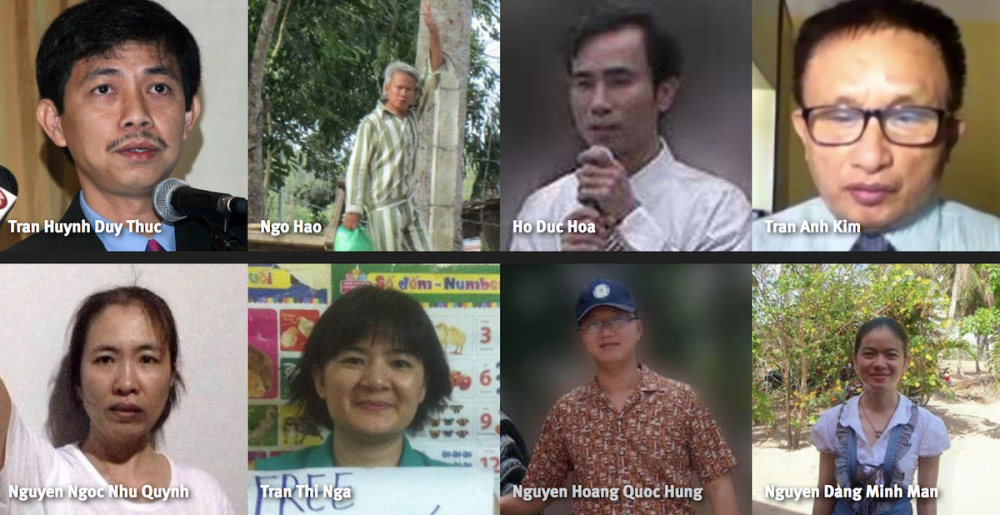 Hundreds of people in central provinces including Quang Binh, Ha Tinh, and Nghe An held regular protests against Formosa, a Taiwanese steel corporation that dumped toxic waste in the ocean, causing a massive marine environment disaster in April 2016.

Land confiscation that displaces local people without providing adequate compensation is one of biggest problems in the country. In April, the people of Dong Tam commune in Hanoi took a nationally unprecedented move by holding 38 policemen and local government officials hostage for a week over a long-unresolved land dispute. The villagers released the hostages after Chairman of Hanoi People’s Committee Nguyen Duc Chung promised to conduct a comprehensive inspection.

Local police use force and intimidation to prevent activists from participating in protests and human rights discussions, or attending trials of fellow activists. In May, authorities prevented prominent activists Pham Doan Trang, Nguyen Quang A, and Nguyen Dan Que from leaving their houses during the bilateral human rights dialogue between Vietnam and the United States government.

Government repression caused hundreds of Montagnards to flee to Cambodia and Thailand. Vietnam responded to the flight of Montagnards into Cambodia by pressuring Cambodian authorities to prevent border crossings and deny the asylum claims of those who arrive in Cambodia. According to the United Nations Refugee Agency, UNHCR, Vietnam pressured the UN and refugee resettlement countries to not accept Montangnards.

In April, the People’s Court of Gia Lai province sentenced at least five Montagnards to 8 to 10 years in prison for the so-called crime of participating in independent religious groups not approved by the government.

Police brutality, sometimes leading to deaths in police custody, was common during the year. In May 2017, Vinh Long police arrested Nguyen Huu Tan on charges of conducting propaganda against the state. Police later claimed he committed suicide with a knife left in the interrogation room by a policeman. His family protested, pointing out many discrepancies between what they saw on his body and a blurry police video recording shown to them briefly.

In August, Tran Anh Doanh told a reporter that police in Son Tay, Hanoi, beat him severely to force him to confess to a theft charge. In September, Vo Tan Minh died in police custody in Phan Rang-Thap Cham, Ninh Thuan province, and his family found bruises on his back, legs, and arms. The police initially claimed Vo Tan Minh was involved in a fight, but later suspended five police officers and opened a case of “using corporal punishment.”

People dependent on drugs, including children, are frequently held in government detention centers where they are forced to perform menial work in the name of “labor therapy.” Violations of center rules and failure to meet work quotas are punished by beatings and confinement to disciplinary rooms where detainees claim they are deprived of food and water. State media reported that during the first six months of 2017, authorities sent 3,168 people to centers in Ho Chi Minh City, increasing the number of drug detainees held in the city to 11,317. In August, the government issued Decree 97 that expands the categories of people who can be sent to compulsory drug rehabilitation centers.

China remained the biggest trade partner of Vietnam, but maritime territorial disputes continued to complicate the relationship between the two countries.

Despite the US pullout from the Trans-Pacific Partnership in January 2017, the two countries pursued improved military and economic relations. During his May visit to the White House, Prime Minister Nguyen Xuan Phuc promised that Vietnam would cooperate with the US on trade, regional security, and immigration issues.

In November, US President Donald Trump traveled to Vietnam for a regional summit and meetings with officials in Hanoi, but did not publicly raise human rights or democracy concerns during the visit.

In August, Germany protested the abduction in Berlin of asylum seeker Trinh Xuan Thanh, a former PetroVietnam executive, and expelled two Vietnamese diplomats who allegedly were involved in the incident.

During the year, the European Union delegation to Vietnam voiced concerns over the arrest and conviction of several activists, but Brussels remained silent on human rights violations in the country. In February, the European Parliament (EP) Subcommittee on Human Rights visited Vietnam.

The EP delegation recognized that Vietnam has made economic and social progress and begun a process of advancing economic and social rights, but voiced concerns over Vietnam’s record on civil and political rights, including freedom of expression, association, religion, or belief. In September, the chair of the EP Committee on International Trade said that human rights are at the center of Vietnam-EU trade talks.