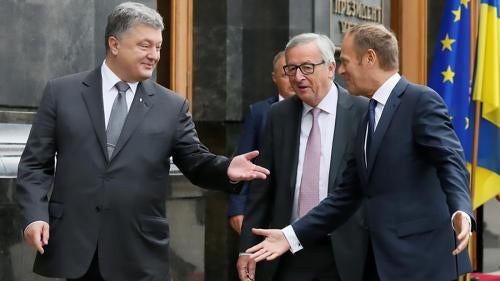 Throughout 2017, all sides in the armed conflict in eastern Ukraine frequently ignored the 2015 Minsk Agreements and endangered civilians and civilian infrastructure as they continued hostilities. Total impunity for conflict-related torture and arbitrary, unacknowledged detention persisted on both sides. The government failed to hold perpetrators of attacks on journalists to account. New government measures further contracted media pluralism, new regulations curbed freedom of expression and association, and new draft laws propose further restrictions. In Crimea, Russian authorities persecuted pro-Ukraine activists and the Crimean Tatar community for their peaceful opposition to Russia’s occupation of the peninsula.

The armed conflict in eastern Ukraine between the Ukrainian government and separatist armed groups supported by Russia entered its fourth year. In late January and early February, all sides to the conflict engaged in massive shelling of populated areas, severely damaging essential civilian infrastructure and killing civilians. According to the Organization for Security and Co-operation in Europe (OSCE) Special Monitoring Mission (SMM), as of mid-November, at least 425 civilians were injured or killed in 2017, more than the previous year.

In April, a paramedic with the OSCE’s SMM was killed when the car he was riding in blew up on a landmine in eastern Ukraine.

Ukrainian authorities took several positive steps to facilitate civilians’ crossing of the contact line. But lack of adequate sanitary and other infrastructure at crossing points, especially from the nongovernment-controlled side, exposure to landmines and shelling, and long waits in extreme temperatures continued to cause civilians undue hardship.

In the self-proclaimed Donetsk People’s Republic (DPR) and Luhansk People’s Republic (LPR) Russia-backed de facto authorities continued to carry out arbitrary detentions and enforced disappearances, holding civilians for weeks without any contact with lawyers, families, or the outside world. Local security services operated without checks and balances. The overall absence of the rule of law in separatist-controlled areas leaves detainees extremely vulnerable to abuse.

In May, a military tribunal in Donetsk convicted Igor Kozlovsky, a local academic with pro-Ukrainian views, on trumped-up charges of illegal weapons possession and sentenced him to 32 months in prison. The circumstances of Kozlovsky’s arrest, his prolonged incommunicado detention, and the use of clearly fabricated evidence indicate political motivation.

In June, security officials in Donetsk arbitrarily detained and forcibly disappeared a pro-Ukrainian blogger and a regular contributor to Radio Free Europe/Radio Liberty, Stanyslav Aseev, who was still in custody at time of writing.

By the end of 2016, the Security Service of Ukraine (SBU) released all detainees it had been unlawfully holding, in secret, in its Kharkiv branch. However, the SBU’s leadership continued to deny its responsibility for secret detentions and enforced disappearances. The military prosecutor’s probe into these practices yielded no meaningful results.

In August, SBU officials in the Dnipropetrovsk region unlawfully detained and tortured Daria Mastikasheva, later charging her with treason for allegedly working as a Russian agent. At time of writing, no one was found responsible for Mastikasheva’s ill-treatment.

Rule of Law, Accountability for Past Abuses

Justice for conflict-related abuses and crimes committed during the 2014 Maidan protests, which led to the ouster of the Ukrainian government and mass disturbances in Odesa, remained elusive.

In September, an Odesa court acquitted all 19 defendants who were on trial for offenses related to the May 2, 2014 mass disturbances, which pitted pro-Maidan and anti-Maidan groups against each other, and in which 48 people died and more than 200 were injured. All 19 were anti-Maidan activists, five of them were in pretrial custody since 2014. The court stated that the prosecution “did not even try to prove their guilt.” The SBU immediately accused two of them of separatism, and a court remanded them to custody. A crowd of Ukrainian nationalists attempted to storm the courtroom as judges announced the verdict, using tear gas and stones, and injuring about 20 police officers. Police investigated, but at time of writing no one was held accountable. One pro-Maidan suspect remains at liberty, pending trial.

In two ongoing trials against former members of the Berkut riot police battalion, charged with killing and injuring protestors in the February 2014 Maidan protests, several of the defendants were on the run, and others repeatedly failed to appear in court. Five more former Berkut members are currently on trial in Kyiv on similar charges. In July, another former Berkut member, Sergei Loboda, was detained and is under house arrest pending investigation.

On April 7, a Kyiv court sentenced seven former members of the Tornado police battalion to 8 to 10 years in prison, and its leader to 11 years in prison, for torture and rape of civilians. Four others received suspended sentences.

The government took several steps to restrict freedom of expression and media freedom, justifying them by the need to counter Russia’s military aggression in eastern Ukraine and anti-Ukraine propaganda.

In March, President Petro Poroshenko signed a law requiring activists and journalists investigating corruption to publicly declare their personal assets, much like government officials. On July 10, the president introduced amendments that would annul the requirement but instead introduced burdensome and unjustified reporting requirements for all nonprofit organizations and individuals working for them.

On May 15, Poroshenko signed a decree banning major Russian companies and their websites from operating in Ukraine, citing national security. The ban targeted Russian social media used by millions of Ukrainians daily; language and accounting software; the websites of many Russian television stations and other media; and Yandex, an internet browser, and its many affiliates.

In June, a court annulled the 2016 acquittal of Ruslan Kotsaba, a journalist who had been prosecuted on treason charges for calling for boycotting conscription. His re-trial was ongoing at time of writing.

Ukrainian authorities made no meaningful effort to investigate a pro-government site, Myrotvorets, which in 2016 and 2017 leaked the personal data of hundreds of journalists working in separatist-controlled regions. Some government officials publicly supported Myrotvorets’ actions.

In July and August, the SBU expelled or denied entry to several foreign journalists—three from Russia and two from Spain—for allegedly engaging in anti-Ukrainian “propaganda.”

The 2016 murder of renowned journalist Pavel Sheremet remained unsolved. The 2016 attacks on the offices of Inter, a television station widely perceived to be pro-Russian, also remained uninvestigated.

Ukraine has taken several significant steps to improve the protection and inclusion of the country’s lesbian, gay, bisexual, and transgender (LGBT) people. In February, the Ministry of Health proposed a medical form for patients choosing a family doctor, which acknowledges transgender people and allows people to choose whether to indicate their gender.

Law enforcement ensured the safety of participants in Marches for Equality in June and July 2017 in Kyiv and Odesa, but everyday homophobia and transphobia remains widespread.

In May 2017, around 30 young men assaulted several LGBT activists at a small rally in Kharkiv, burned their rainbow flag, and injured one activist and two police officers. Four of the attackers were detained.

Tens of thousands of patients with advanced cancer suffer from severe pain every year. The regulatory reforms adopted in recent years that made oral morphine available to patients have not been fully implemented. Healthcare workers lack proper education and training in pain treatment, or simply refuse to change their practices.

The human rights crisis in Crimea that began with Russia’s occupation of the peninsula in 2014 persisted. Russian authorities thoroughly suppressed public criticism of Russia’s actions there and criminally prosecuted people for criticizing the occupation. Most independent media and rights activists have had to leave. The few who remain are under increasing pressure from authorities.

On September 11, a Russian court in Crimea found a prominent Crimean Tatar leader, Akhtem Chiygoz, guilty on charges of organizing “mass riots,” following an unfair trial, and sentenced him to eight years in prison. In August, a court in Simferopol sentenced Server Karametov, a 76-year old Crimean Tatar, to 10 days’ detention for “disobeying police orders” while holding a peaceful, single-person picket to protest Chiygoz’s trial.

Chiygoz is deputy chairman of the Mejlis, the Crimean Tatars’ elected representative body. In September, another Mejlis deputy chairman, Ilmi Umerov, was sentenced on separatism charges for stating in a media interview that Crimea should be returned to Ukraine. Russia’s Supreme Court in 2016 declared the Mejlis an “extremist” organization and banned it. On October 25, after negotiations between Turkey and Russia, Russian authorities allowed Chiygoz and Umerov to leave Crimea for Turkey. On October 27, they arrived in Kyiv.

The number of students in Crimea in classes with Ukrainian as the language of instruction plummeted from 13,589 in 2013 to 371 in 2016, according to a report by the Crimean Human Rights Group, a nongovernmental organization. Local law enforcement intimidated pro-Ukraine activists into canceling peaceful cultural and political events. One of the few remaining activists, Leonid Kuzmin, fled Crimea in August.

In September, the OSCE SMM’s chief monitor, Ambassador Ertugrul Apakan, urged the sides to the conflict to “prioritise the protection of the civilian population” and to stop “positioning personnel and hardware in and around residential areas, and […] imprecise weapons […] in civilian-populated areas.”

In a September report, the United Nations High Commissioner for Human Rights condemned repeated ceasefire violations in eastern Ukraine and their impact on civilian lives. In a separate September report, he noted that the human rights situation in Crimea “significantly deteriorated under Russian occupation.”

In June, the European Union ratified a key trade agreement with Ukraine, and introduced visa-free travel for Ukrainian citizens. Its condemnation of abuse by Russia in Crimea and of abuses by Russia-backed armed groups in Donetsk and Luhansk regions is consistently strong. It raised concerns about media freedoms, torture prevention, and other issues at the EU-Ukraine human rights dialogue.

During the July EU-Ukraine summit, the EU underscored the need for Ukraine to pursue stronger in-country reforms against corruption. But the EU’s willingness to press the government on rights issues did not always match its level of commitment to expanding and deepening its overall relationship. Except for its strong reaction to the measures targeting anti-corruption activists, the EU has failed to engage with the government on limitations to freedom of expression and association.

During a July visit to Kyiv, US Secretary of State Rex Tillerson highlighted the importance of anti-corruption and judiciary reforms as “critical to the success of Ukraine.”