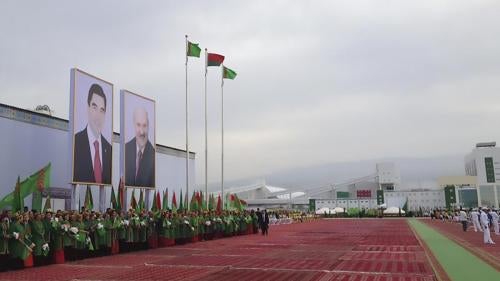 Turkmenistan remains one of the world’s most closed and oppressively governed countries. President Gurbanguly Berdymukhamedov and his associates control all aspects of public life. Elections extended Berdymukhamedov’s presidential term for another seven years.

The government effectively bans all forms of religious and political expression not approved by authorities, tightly controls media, and allows no independent monitoring groups. Dozens of people remain victims of enforced disappearance.

In 2017, Turkmenistan hosted the 5th Asian Indoor and Martial Arts Games (AIMAG), marking a rare departure from the country’s self-imposed isolation, but prompting the government to clamp down further on expression and other rights.

In February, Berdymukhamedov was re-elected to a third term with 97.7 percent of the vote in an election that lacked meaningful political competition. The election assessment mission of the Organization for Security and Co-operation in Europe’s Office for Democratic Institutions and Human Rights (OSCE/ODIHR) noted that it “took place in a strictly controlled political environment” that lacked pluralism and media independence.

In October, Berdymukhamedov announced the revival of the People’s Council, in theory the state’s highest representative body, headed by the president. Composed of a wide variety of elected and unelected officials, it can change and pass constitutional laws and issue decrees, further eviscerating separation of powers in Turkmenistan.

The government keeps a tight grip on all print and electronic media in Turkmenistan. Activists and correspondents who provide information to foreign outlets face government retaliation. Authorities withdrew press accreditation and visas for several foreign reporters who planned to cover the AIMAG, claiming lack of capacity to accommodate them.

In four separate incidents during July, and again in November, unidentified men severely harassed Soltan Achilova, an RFE/RL reporter, including with death threats.

In December 2016, authorities in Dashoguz province beat and arrested Khudayberdy Allashov, an RFE/RL Turkmen-language service correspondent, and his mother on charges of possessing chewing tobacco. Allashov had reported on such topics as wage delays and food shortages. Both were released in February after a court convicted them and issued a three-year suspended prison sentence.

In November 2016, authorities threatened to enforce a suspended sentence against another RFE/RL contributor, Rovshen Yazmuhamedov, if he did not stop working with the outlet.

In March, Yazdursun Gurbannazarov was elected Turkmenistan’s first ombudsperson, following the 2016 ombudsmen law’s entry into force. It is unclear whether authorities will allow this new institution independence and impartiality.

Anyone who exposes or questions government policies faces constant threat of reprisal. The Turkmen government ignored calls by several international actors to free Gaspar Matalaev, an ANT activist, imprisoned in October 2016 on false fraud charges in retaliation for his work monitoring state-sponsored forced labor in the cotton harvest.

In October 2016, Galina Vertryakova was convicted on bogus extortion charges after she criticized, on Russian social media, government policies, and was freed through amnesty in December 2016. In October, police accused Vertyakova of spreading secret state information.

In September, on the eve of the AIMAG, police threatened Galina Kucherenko, an animal rights activist, with 25 years’ imprisonment for her posts on Russian-language social media. For several weeks in September, October and November, her internet was inexplicably cut off and she has been under constant surveillance. In November, unidentified officials came to her home and threatened to have her imprisoned.

In August, unknown people verbally assaulted Natalia Shabunts, one of the few openly active human rights defenders inside Turkmenistan. They publicly shouted racial slurs at Shabunts, and demanded that she go to Russia.

The government arbitrarily bans from foreign travel people it considers disloyal, including the families of dissidents and prisoners. The Ruzimatov family, relatives of an exiled former official, remained banned from traveling abroad.

Authorities in Ashgabat failed to provide adequate compensation or redress to residents whose homes were expropriated and demolished for large-scale renewal and beautification projects in the five years before the AIMAG. Authorities denied justice to, harassed, and intimidated some residents who sought fair compensation.

In May and August, officials in Ashgabat ordered residents of several neighborhoods to remove air conditioners in multi-story apartment buildings to improve the city’s appearance before the AIMAG. In many cases, authorities forcibly removed them, damaging property and leaving residents without air conditioning despite heat often exceeding 40 degrees Centigrade (104 degrees Farenheit).

According to Forum 18, an independent religious freedom group, only two religious communities are known to have successfully re-registered under a March 2016 religious law.

In January, ANT reported the deaths in 2016 of Lukman Yaylanov and Narkuly Baltayev. In July, ANT reported the death in June of Aziz Gafurov. Yavlanov and Baltayev were sentenced in 2013, and Gafurov in 2015, for involvement in an informal Sunni study group. All three were inmates at Ovadan-Tepe, known for torture and long-term incommunicado detention. Authorities forced the deceased’s families to sign a nondisclosure agreement about the bodies of the deceased.

ANT also reported that in December 2016, 52-year-old Yoldash Khojamuradov committed suicide at home after police accused him of being a Wahhabi (the term used by the government to designate people as extremists) and interrogated him for several weeks, pressuring him to name other Wahhabis.

Torture and ill-treatment are widespread and continue with impunity. It is impossible to determine the exact number of people jailed on politically motivated grounds due to the complete lack of transparency in the justice system, closed trials, and severe repression that precludes independent monitoring of these cases.

Political dissident Gulgeldy Annaniyazov, arrested in 2008 and sentenced to 11 years on charges that were not made public, remained imprisoned. Turkmen authorities have said he is being held in a penal colony in Tejen, however this has not been independently confirmed.

In October 2016, Turkmen authorities accused an estimated 100 men of having links to the Gülen movement and its leader, Fethullah Gulen, accused by the Turkish government of organizing the 2016 coup attempt in Turkey. In February, 18 were sentenced in closed trials to up to 25 years in prison on various charges, including incitement to hatred and involvement in a criminal organization. In July, authorities sentenced another 40 men from Lebap province to lengthy prison terms, reportedly on similar charges. The authorities’ isolation of these men and intimidation of their families made it impossible to independently confirm some aspects of these reports, including that the men were tortured in custody.

Dozens of people arrested in the late 1990s and early 2000s remain forcibly disappeared in Turkmen prisons. Following their arrest, the government denied their families access to them and information on their whereabouts. In 2017, the fate and whereabouts of these men remained unknown, except in the cases of three who died and whose bodies authorities returned to families, confirmed by Prove They Are Alive, an international campaign against enforced disappearances in Turkmenistan. Among them is Tirkish Tyrmyev, former head of the State Border Service, sentenced to 10 years on abuse of office charges.

Authorities continued to ignore the United Nations Human Rights Committee’s decision to release Boris Shikhmuradov, the former foreign minister and a victim of an enforced disappearance as determined by the committee.

Homosexual conduct is a criminal offense under Turkmen law, punishable by a maximum two-year prison sentence.

Turkmenistan’s international partners spoke out more than in previous years about human rights abuses. An exception was UN Secretary-General Antonio Guterres, who met President Berdymukhamedov in June but who only mentioned “commitments to respect human rights” in the context of countering terrorism.

Another exception was the Olympic Council of Asia (OCA), owner and operator of the AIMAG. Despite its commitment within its own constituent charter to uphold the principles of human dignity and press freedoms in host countries, the OCA was silent on Turkmenistan’s abuses. When asked at a press conference in Ashgabat about Turkmenistan’s violation of media freedoms, a top OCA official said, “We have instructed the organising committee not to cooperate with media that is unwilling to … report positively about sport. Our attention is directed at the development of sport and positive, real media”.

In February, the European Union highlighted several shortcomings in Turkmenistan’s presidential elections and called on the Turkmen authorities to address them.

During its annual human rights dialogue with Turkmenistan, the EU raised concerns about torture and conditions in detention and suppression of fundamental freedoms.

In its annual human rights report on Turkmenistan, the US Department of State flagged general human rights concerns, and for the first time reported the status of Shikhmuradov and others on the Prove They Are Alive list under the section on disappearances.

During a January meeting of the OSCE Permanent Council, Switzerland—acting also on behalf of Iceland and Canada—called on Turkmenistan to investigate Tirkish Tyrmyev’s death and raised concern about enforced disappearances.

In their respective concluding observations, the UN Human Rights Committee and the UN Committee Against Torture urged the government to investigate enforced disappearances. The former also urged the government to, among other things, end informal travel bans, allow “a truly independent media,” “decriminalize sexual relations between consenting adults of the same sex,” and provide effective remedies to people affected by forced evictions.

13 UN experts have requested, but not received, access to the country.