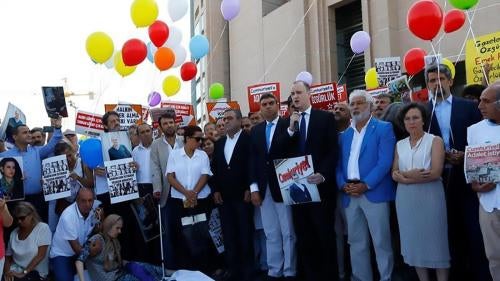 An April 2017 referendum, which voters approved by a slim margin, introduced constitutional amendments switching Turkey to a presidential system of governance, the most significant change to its political institutions in decades. The referendum took place under a state of emergency imposed after the July 15, 2016 attempted military coup, and in an environment of heavy media censorship, with many journalists and parliamentarians from the pro-Kurdish opposition in jail.

The new presidential system, which consolidates the incumbent’s hold on power, is a setback for human rights and the rule of law. It lacks sufficient checks and balances against abuse of executive power, greatly diminishing the powers of parliament, and consolidating presidential control over most judicial appointments. The presidential system will come fully into force following elections in 2019.

Under the state of emergency in place since July 2016, the president presides over the cabinet, which can pass decrees without parliamentary scrutiny or the possibility of appeal to the constitutional court. Many decrees adopted contained measures that undermine human rights safeguards and conflict with Turkey’s international human rights obligations.

Public officials continued to be dismissed or suspended by decree without due process, with more than 110,000 dismissed since July 2016. Hundreds of media outlets, associations, foundations, private hospitals, and educational establishments that the government shut down by decree remained closed in 2017, their assets confiscated without compensation.

In January, the government ruled on the establishment of an ad hoc commission to review decisions made under the state of emergency. The commission lacks independence since its seven members are appointed by the same authorities responsible for approving dismissals and closures. There is a right of further appeal, but mechanisms for redress and compensation are likely to take many years. In the meantime, those affected have no right to work in public service, their bank accounts are frozen, and passports confiscated. At time of writing, over 102,000 people had applied to the commission, which had not yet begun to issue decisions such as overturning dismissals and closures.

People continued to be arrested and remanded to pretrial custody on terrorism charges, with at least 50,000 remanded to pretrial detention and many more prosecuted since the failed coup. Those prosecuted include journalists, civil servants, teachers and politicians as well as police officers and military personnel. Most were accused of being followers of the US-based cleric Fethullah Gülen. Turkey’s government and courts say the Gülen movement masterminded the coup attempt, and deem it a terrorist organization, labelled the Fethullahist Terrorist Organization (FETÖ). Prosecutions of individuals charged with FETÖ membership often lacked compelling evidence of criminal activity.

Among many ongoing trials against soldiers alleged to have participated in the coup attempt, in October a court in Muğla sentenced 40 military personnel to life imprisonment in connection with the attempted assassination of President Erdoğan on July 15, 2016.

The prosecution and jailing of journalists for doing their work continued after the closing of media outlets since the coup attempt. Turkey is the world leader in jailing journalists and media workers as they face criminal investigations and trials, with around 150 behind bars at time of writing. Most newspapers and television channels lack independence and promote the government’s political line.

Several major, politically motivated trials of journalists on terrorism-related charges began in 2017. The evidence consisted of writing and reporting, which did not advocate violence, alongside unsupported allegations of connections with terrorist organizations or involvement in the coup attempt. That trials continued despite the lack of credible evidence to substantiate the charges demonstrated lack of judicial independence.

At the first trial hearing in March of a group of journalists accused of FETÖ membership, the court decided to release on bail 21 defendants who had been held in prolonged pretrial detention. However, following criticism of the decision by a pro-government journalist, there was an appeal against the release of eight of the 21, and a new investigation against the other 13. As a result, none were released from detention. The High Council of Judges and Prosecutors subsequently suspended the three judges who had ruled to release the journalists, plus the prosecutor at the hearing.

The trial of 19 journalists, board members and other personnel from the Cumhuriyet newspaper on charges of FETÖ links began on July 24. Well-known reporter Ahmet Şık is among five defendants still in prolonged pretrial detention.

In a separate case concerning Cumhuriyet reporting on Turkish intelligence services supplying arms to Syrian opposition groups, an Istanbul court in June sentenced Enis Berberoğlu, member of parliament for the opposition Republican People’s Party (CHP), to 25 years’ imprisonment for providing video of the weapons to the newspaper. He remained in prison at time of writing, although a court of appeal overturned his conviction and ordered a retrial. Proceedings against Cumhuriyet Ankara bureau chief Erdem Gül and former editor Can Dündar on related allegations continued.

The trial of 31 Zaman newspaper journalists and media workers on coup attempt charges began in September, a full 14 months after many of the defendants were remanded to pretrial detention. They face life imprisonment if convicted for writings that did not advocate violence.

During 2017, Kurdish journalists were prosecuted and detained on charges of links with the armed Kurdistan Workers’ Party (PKK) over their reporting. Dozens of journalists and public figures who participated in a solidarity campaign with the now closed pro-Kurdish Özgür Gündem newspaper were prosecuted for terrorist propaganda. While most received suspended sentences and fines, in May an Istanbul court sentenced Murat Çelikkan, a journalist and human rights defender, to 18 months’ imprisonment. He was released after two months.

The blocking of websites and removal of online content continued, with an April court order upholding the request by the state Information and Communication Technologies Authority to block the entire Wikipedia website. Turkey made 45 percent of global requests to Twitter to remove online content in the first six months of 2017.

Nuriye Gülmen and Semih Özakça, an academic and teacher respectively, dismissed under the state of emergency, were repeatedly detained and released by police as they carried out a sit-in, and later hunger strike in Ankara to demand reinstatement. In May, a court remanded them to prison pending trial charged with terrorist membership. Özakça was released in October and Gülmen in December. In advance of their first trial hearing in September, 16 lawyers representing them were detained and 14 subsequently remanded to prison. In November, their lead defense lawyer Selçuk Kozağaçlı, head of the shuttered Contemporary Lawyers Association, was also arrested.

Under the state of emergency in Turkey over 500 lawyers have been jailed pending trial, and over 1,000 prosecuted. Most lawyers facing prosecution are accused of alleged FETÖ links.

In 2017, the crackdown on critical voices in Turkey was extended to human rights defenders. In June, Taner Kılıç, chair of Amnesty International Turkey, was detained and placed in pretrial detention for alleged FETÖ links. The politically motivated and unsubstantiated charges against him are grounded on the claim he had an encryption app known as ByLock on his phone, which the government claims links him to FETÖ. Kılıç denies the accusation, and his legal team produced two expert reports demonstrating that ByLock was never downloaded on his phone.

The charges are based on random material, including Amnesty International campaign material, and a grant application, gathered from the defenders’ phones and laptops. On October 25, a court ordered their release on bail. The two foreign nationals left the country. The case against Taner Kılıç was combined with that against the 10 defenders, and the trial against the 11 continued.

In November, Osman Kavala, a businessman and well-known figure in civil society in Turkey, was jailed pending investigation on trumped up charges, including involvement in the July 2016 coup.

Torture and Ill-Treatment in Custody

Cases of torture and ill-treatment in police custody were widely reported through 2017, especially by individuals detained under the anti-terror law, marking a reverse in long-standing progress, despite the government’s stated zero tolerance for torture policy. There were widespread reports of police beating detainees, subjecting them to prolonged stress positions and threats of rape, threats to lawyers, and interference with medical examinations.

There were credible reports of unidentified perpetrators believed to be state agents abducting men in at least six cases, and holding them in undisclosed places of detention in circumstances that amounted to possible enforced disappearances. At least one surfaced in official custody and three others were released after periods of two to three months. The men had all been dismissed from civil service jobs for Gülenist connections.

Resumption of Conflict and Crackdown on Kurdish Opposition

In parallel with the resumption of armed clashes between the military and the armed Kurdistan Workers’ Party (PKK) in the southeast, the government pursued a crackdown on elected parliamentarians and municipalities from pro-Kurdish parties.

During 2017, up to 13 Peoples’ Democratic Party (HDP) deputies were held in prolonged pretrial detention on terrorism charges. Two of them, party co-leader Selahattin Demirtaş and former co-leader Figen Yüksekdağ, have been in detention since November 2016. Yüksekdağ was stripped of her parliamentary seat in February after an earlier terrorism propaganda conviction was upheld. Demirtaş’ trial began in Ankara on December 7 but, allegedly due to security concerns, he was not permitted to appear in court, a failure to respect his due process rights.

In the southeast, the government took control in 89 municipalities won by the HDP’s sister party in the region, the Democratic Regions Party (DBP), and suspended their democratically elected co-mayors under suspicion of terrorism offenses, with at least 70 jailed pending trial at time of writing. This violates the rights to political association and participation and freedom of expression of the elected officials, and denies the right to political representation for those who elected them.

Turkey continues to host the largest number of refugees in the world. Of the 3.4 million in Turkey, most come from Syria, but Turkey also hosts asylum seekers from Afghanistan, Iraq and other countries. A migration deal with the European Union, which offers aid in exchange for preventing onward migration to the EU, continued. Restrictions on the Syrian border impeded access to Turkey for refugees.

There remained high rates of child labor and large numbers of child refugees and asylum seekers not attending school, with a particularly precarious situation for non-Syrians. As of the latest available update, nearly half-a-million Syrian refugee children are currently enrolled in school, but at least 380,000 remain out of school. Lack of access to full protection is compounded by exploitative labor conditions and poverty.

The EU-Turkey relationship deteriorated further in 2017, with a resolution in the European Parliament and some member states calling for a suspension of the EU accession process over the country’s worsening rights record.

Relations between Turkey and several EU member states and the US were marked with tensions over arbitrary detention of their nationals on trumped up terrorism charges.

Germany’s Chancellor Angela Merkel ruled out greater EU-Turkey economic cooperation through a renewed Customs Union in the current political context. In June, the German cabinet decided to relocate troops from a Turkish airbase to one in Jordan.

While the US State Department raised concerns on matters relating to human rights in Turkey, relations between the US and Turkish governments were dominated by Turkey’s objection to US backing for PKK-affiliated Kurdish forces in Syria in operations against the extremist Islamic State (IS) forces. Turkey sees the extradition of US-based cleric Fethullah Gülen as another priority.

In April, the Council of Europe Parliamentary Assembly voted to reinstate a full monitoring procedure against Turkey after 13 years, citing “serious concerns” about respect for human rights, democracy and the rule of law. The Venice Commission, the Council of Europe’s constitutional advisory body, criticized Turkey’s state of emergency measures and move to a presidential system, citing “excessive concentration of executive power in the hands of the president” and lack of “necessary checks and balances.”

The Council of Europe Commissioner for Human Rights and UN special rapporteur on freedom of expression both published reports on Turkey’s deeply problematic record on free speech and media freedom.