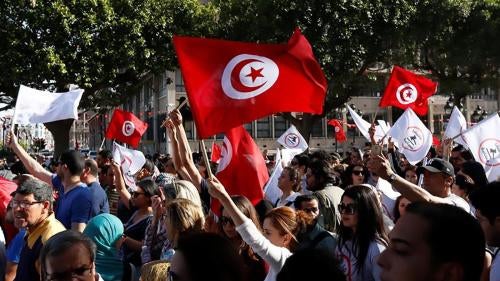 Tunisian lawmakers have made important steps for the consolidation of women’s and detainees’ rights but have failed to establish key institutions mandated by the constitution for human rights protection, such as the Constitutional Court. They have also adopted laws that threaten the democratic transition, such as the administrative reconciliation law, which grants amnesty for state officials accused of corruption.

The 2014 constitution upheld many key civil, political, social, economic, and cultural rights. However, the constitution does not abolish the death penalty, even though authorities have observed a de facto moratorium on its application since the early 1990s.

Authorities made some progress in harmonizing legislation with the constitution.

For example, the 2014 constitution guarantees judicial independence and called for establishing a Supreme Judicial Council (SJC) to make judicial appointments and oversee the discipline and career progression of judges. On November 16, 2015, parliament approved a law creating the SJC. On October 23, 2016, 33 out of 45 members of the council were elected by their peers (judges, lawyers, bailiffs, notaries, and law professors), a radical change from the previous system under Ben Ali where government officials appointed them, undermining judicial independence.

In 2011, the transitional authorities liberalized the press code and law pertaining to the broadcast media, eliminating most of the criminal penalties these laws impose on speech offenses. However, authorities continued to resort to the penal code and the Code of Military Justice, to prosecute people for speech offenses.

A Tunis court used article 128 of the penal code, which criminalizes “accusing, without proof, a public agent of violating the law,” to sentence Walid Zarrouk, a former prisons officer and member of the Union for a Republican Police, on November 23, 2016, to one year in prison for a television interview in which he accused Tunisian authorities of fabricating charges against those who criticize them. The same day, another chamber of the same court sentenced Zarrouk to eight months for his criticism of the interior minister in a daily newspaper. And on February 7, 2017, a Tunis court sentenced him to one year in prison for Facebook posts that criticized an investigative judge and a judiciary spokesperson. Zarrouk was still serving his time in prison at time of writing. The charges were defamation in both cases.

Nabil Rabhi, a Tunisian blogger arrested on July 23, was sentenced on August 5 to six months in prison and fined 1,200 dinars (US$487) under article 125 for Facebook posts “insulting” public figures. In his social media posts, published on July 21, Rabhi used vulgar language in describing Hafedh Caïd Essebsi, the executive director of the Nidaa Tounes Party and son of the Tunisian president, as well as other Nidaa Tounes members.

Penal code article 125 that criminalizes “insulting a public official” has served in practice as a means by which the police can arrest individuals—some of whom ended up being prosecuted and imprisoned—merely for arguing with police, being slow to heed orders, or were suspected when they filed a complaint of being likely to file a complaint against police.

Salam and Salwa Malik, two journalists, were sentenced in May 2017 to six months in prison, later reduced to a fine. They were accused of insulting the police during a raid on their house seeking to arrest their brother, during which a policeman threatened to “blast” their 7-year-old nephew, according to Salwa Malik.

Separate trials of two prominent bloggers, Mariem Mnaouer and Lina Ben Mhenni, continued in 2017. The first was prosecuted in 2012 for insulting a state official, and the second in 2014 under the same charge, shortly after each had filed complaints against police officers for using violence against them.

In October, a couple was sentenced to several months in prison for public indecency and insulting a state official under article 125 of the penal code after police found them kissing in their car.

On December 24, 2013, the National Constituent Assembly (NCA) adopted the Law on Establishing and Organizing Transitional Justice.

The law established a Truth and Dignity Commission tasked with uncovering the truth about abuses committed between July 1955, shortly before Tunisia’s independence from France, and the law’s adoption in 2013. The commission declared, in June 2016, that it had received 62,065 complaints from people alleging human rights abuses and had begun processing them.

On November 17 and 18, 2016, the Truth and Dignity Commission held the first public hearings of victims of human rights violations, which were aired live on national TV and radio stations. Since then, the commission has held 11 more hearings covering various human rights violations during the Ben Ali and Bourguiba presidencies, such as torture, abuses against union rights, sexual assault against women imprisoned for political reasons, and violations of economic rights.

The transitional justice process suffered a major setback with the adoption, on September 13, 2017, of a law on “reconciliation in the administrative field” by a vote of 117 votes to nine, with one abstention. The law offers blanket impunity for those civil servants implicated in corruption and embezzlement of public funds but who did not benefit personally. For this category of persons, the law terminates any ongoing prosecutions and trials and preempts future trials. The law would thus impair the work of the commission, which had a mandate to investigate economic crimes and situate them within the larger picture of systematic corruption under President Ben Ali.

The transitional justice process suffered also from lack of criminal accountability for serious human rights violations. Authorities have failed in the seven years since Ben Ali’s overthrow to investigate or hold anyone accountable for the vast majority of torture cases, including notorious cases of death in custody as a result of torture. The transitional justice law mandates the establishment of specialized chambers within the civil court system to try human rights violations that occurred between July 1955 and December 2013. To date, the specialized chambers have not been set up.

Security and State of Emergency

The state of emergency President Beji Caïd Essebsi declared after a suicide attack on a bus that killed 12 presidential guards in November 2015 remained in effect at time of writing. It is based on a 1978 decree that empowers authorities to ban strikes or demonstrations deemed to threaten public order, and to prohibit gatherings “likely to provoke or sustain disorder.” It gives the government broad powers to restrict media and to place persons under house arrest.

Authorities arrested Chafik Jarraya, a well-connected businessman, and several other men in May 2017 and placed them under “house arrest” in an unknown location, a procedure allowed under the state of emergency. Authorities said the men were involved in corruption and represented a threat to state security and later transferred them to prisons.

During their house arrest, they were not allowed to see their lawyers or to contact their families for more than 10 days, a clear breach of due-process rights. Jarraya and the previous head of the anti-terror unit, Saber Lajili, are being prosecuted before a military court on charges of treason and sharing intelligence with a foreign army, punishable by the death penalty. The other men are being prosecuted before a financial court for financial crimes.

Since the emergency law came into force in November 2015, at least 139 Tunisians have been confined without charge under indefinite house arrest orders that the police deliver orally, thus hindering the ability of the affected person to mount a court challenge. The measures have created economic hardship, stigmatized those targeted, and prevented them from pursuing their study or business.

Authorities eased the measures in 2016; however, many of those affected remain subject to a travel ban procedure called “S17,” applied to anyone the state suspects of intending to join a fighting group abroad. The procedure allows restrictions on movement both abroad and inside Tunisia. A person placed under S17 procedure risks lengthy questioning whenever they are stopped at a routine police check. The procedure is based on vague language in the law regulating the work of the Ministry of Interior. Authorities have also imprisoned around 200 fighters who returned from Syria, Iraq, or Libya.

Tunisia continued to make progress towards the consolidation of women’s rights.

On July 26, parliament adopted a comprehensive law on fighting violence against women, which includes key elements that are essential to prevent violence against women, protect domestic violence survivors, and prosecute abusers. The law eliminated from the penal code a provision that allowed a rapist to escape punishment if he married his victim.

In August, Caïd Essebsi called for reforming this discriminatory legislation. But Tunisia’s personal status code continues to retain some discriminatory gender provisions, including designating the man as the head of the household and allowing males in certain instances to receive double the share of inheritance than their female relatives.

On April 25, parliament adopted an amendment to ease the harsh drug law, the enforcement of which lands hundreds of young people each year in prison on charges of possessing small quantities of marijuana for personal use.

The Ben Ali-era Law 92-52 imposes a mandatory one-year jail sentence for narcotics use or possession. The amendment gives judges discretion to weigh mitigating circumstances in order to reduce the punishment.

On September 21, the outcome report from the third UPR of Tunisia was adopted during session 27 of the UNHRC. Tunisia accepted 198 recommendations out of the 264 made by states parties, including pledging to boost accountability for abuses by security forces, eliminate torture and other ill-treatment, and ensure that counterterrorism and national security measures do not jeopardize human rights.

On April 13, Tunisia signed a declaration to the African Court on Human and Peoples’ Rights that grants individuals and nongovernmental organizations the right to access the court directly with human rights complaints against it.