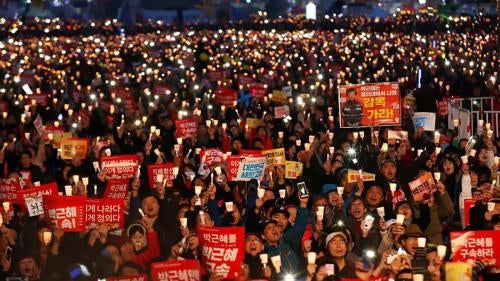 The Republic of Korea (South Korea) is a democracy that generally respects basic civil and political liberties. However, it maintains unreasonable restrictions on freedom of expression, association, and assembly. Discrimination against lesbian, gay, bisexual, and transgender (LGBT) persons, women, racial and ethnic minorities, foreigners—especially refugees and migrants—and people with HIV remains a major problem.

South Korea faced one of its most tumultuous political years in recent memory when on December 9, 2016, the National Assembly voted to impeach President Park Geun-Hye. Charges against her included abuse of power, bribery, and extortion, and leaking classified government information. The action followed massive public protests.

On March 10, 2017, the Constitutional Court upheld the impeachment. Park was arrested on March 30 and was awaiting trial at time of writing. Moon Jae-In, a former human rights lawyer and the leader of the left-leaning Democratic Party of Korea, won the presidency on May 9, 2017, with 41 percent of the vote.

In May, South Korea was reviewed by the United Nations Committee against Torture, which expressed concern about detention conditions and excessive use of force.

Although South Korea has a free press and a lively civil society, successive South Korean governments and large corporations have at various times used draconian criminal defamation laws, the national security law, and restrictive interpretations of other laws to create a chilling effect that limits critical scrutiny of the government and corporations.

Criminal defamation law allows for up to seven years’ imprisonment and a fine. The law focuses solely on whether what was said or written was in the public interest and does not allow for truth as a complete defense. Repeal of the criminal defamation law will be one of key tests of the new Moon administration’s commitment to freedom of expression.

The National Security Law criminalizes any positive comments about North Korea or the dissemination of anything that the government classifies as North Korean “propaganda.” The two Koreas are technically still at war, as the Korean War ended with only a ceasefire in 1953.

The law imposes significant restrictions on the freedom of South Koreans to create and join political associations by imposing severe criminal penalties on anyone who joins or induces others to join an “anti-government organization,” a term not clearly defined in law. The law also imposes criminal penalties on anyone who “constitutes or joins an organization aimed at propagating, inciting, praising, or acting in concert with” an anti-government organization.

Lee Jin-Young, owner of the online library “Labour Books,” was detained on January 5, 2017, for violating the National Security Law after distributing materials that authorities claimed, “benefit the enemy [referring to North Korea].” Seoul District Court declared him not guilty on July 20 and ordered him released from detention.

Education ministry officials in Seoul stated in February 2017 that South Korea’s new national sex education curriculum would not mention homosexuality. This follows the development in 2015 of a plan to train district education officials around the country on new sex education guidelines that do not mention sexual minorities.

The 1962 Military Criminal Act (Article 92-6) punishes sexual acts between soldiers with up to two years in prison under a “disgraceful conduct” clause, regardless of consent and whether they have sex in or outside military facilities. On May 24, a military court sentenced an army captain to six months in prison for having consensual sex with another man. In October, the UN Committee on Economic, Social and Cultural Rights (CESCR) expressed concern at the criminalization of same-sex acts in the Military Criminal Act and recommended that the government abrogate the relevant provision in the law.

During a presidential debate in April, current president, Moon Jae-In, stated that he “opposed” homosexuality and marriage equality. However, he also later said he opposed “discrimination based on homosexuality.”

Freedom of Association for Workers

The government has not ratified the International Labour Organization’s fundamental conventions on freedom of association (C.87), and on the right to organize and collectively bargain (C.98). Government officials are prohibited by law from exercising their right to form a union.

The South Korean government refuses to legally recognize the Korean Teachers and Education Workers' Union (KTU) and the Korean Government Employees Union (KGEU). The KTU was stripped of its legal status in October 2013 because it allows fired teachers to remain as members, while the KGEU has been repeatedly denied the ability to legally register as a union.

The Trade Union and Labour Relations Adjustment Act interferes with freedom of association by requiring a union to expel workers from membership if they are dismissed, even in cases where workers are fired for undertaking legal trade union activity.

The law also interferes with freedom of association by barring those who are not members from standing for trade union office. In October, the CESCR committee raised concerns about lack of protections for workers, including sub-contracted and dispatched labor, and those considered independent contractors, like truck drivers or construction equipment operators.

A relatively small proportion of women occupy decision-making positions in the business, political and public sectors, and there is a 37 percent wage gap between men and women. The Economist magazine’s “Glass Ceiling Index,” which evaluates women’s higher education, women in managerial positions, and number of female members in parliament, gives ROK the lowest score among countries that belong to the Organisation for Economic Co-operation and Development (OECD), with 25 points out of 100.

South Korea’s laws on abortion are punitive and harmful to women and girls. Abortion is considered a crime punishably by up to one year in prison or fines up to 2 million won (US$1,820). Healthcare workers who provide abortions can face up to two years in prison. Exceptions are permitted only in cases of rape or incest, if the parents are blood or matrimonial relatives that cannot marry legally, if continuing the pregnancy is likely to jeopardize the pregnant woman’ health, or when the pregnant woman or her spouse has one of several hereditary disorders or communicable diseases that are designated by government decree.

Married women must have their spouse’s permission to get an abortion. All abortions are prohibited after 24 weeks of pregnancy. In October, over 200,000 South Koreans signed a petition calling for legalization of abortion, which the government had pledged to respond to within a month. In November, the government’s response ducked the issue by saying more research was needed.

South Korea is one of the few countries in Asia to be a party to the 1951 UN Refugee Convention and its 1967 Protocol. However, it continues to reject the vast majority of non-North Korean asylum seekers entering the country.

Since 1994, the government granted refugee status to approximately 2.5 percent of non-North Korean asylum applicants it screened. Between January and October 2017, 7,291 applied for refugee status; the government accepted just 96 cases, or approximately 1.31 percent of applications. North Koreans do not apply for asylum through this process, they are granted South Koran citizenship through the Promotion and Resettlement Support Act for North Korean Refugees.

In an important victory, on July 3, 2017, President Moon’s new government abolished mandatory HIV testing for foreign teachers and overseas students seeking to study in South Korea—a policy that had contradicted guidance from the World Health Organization and other United Nations agencies.

The MOU created the database center and developed a required three-year plan of action that “consistently seeks to offer humanitarian assistance regardless of political situations and will simultaneously make efforts to improve North Korea's human rights record.”  However, at time of writing, the foundation had not yet been established.