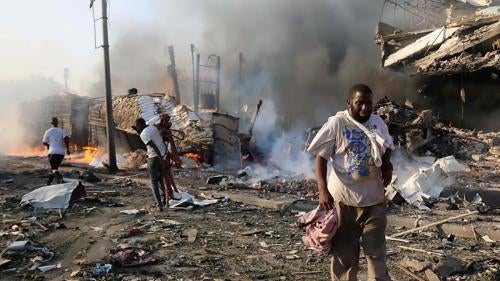 Somalia’s armed conflict, abuses by all warring parties, and a new humanitarian crisis continue to take a devastating toll on civilians.

Hundreds of civilians were killed in indiscriminate attacks by the Islamist armed group Al-Shabab, particularly in Mogadishu. Military operations against Al-Shabab, at times in violation of the laws of war, by Somali government forces and militia, African Union Mission in Somalia (AMISOM) troops, and other foreign forces resulted in deaths, injuries and displacement of civilians—as did inter-clan violence—across the country. On October 14, a bomb-laden truck in central Mogadishu killed at least 358 people, the deadliest single attack in the country’s history; no group claimed responsibility. The United Nations Assistance Mission in Somalia (UNSOM) reported 1,228 civilian casualties between January and September 2017, about half by Al-Shabab.

With parts of the country on the brink of famine, hundreds of thousands of Somalis were displaced bringing the total to over 2 million; while the new administration made addressing the humanitarian crisis a priority, many civilians faced serious abuses and very limited access to basic services.

The year saw little progress in holding security forces to account for attacks on journalists and arbitrary detentions, or improving protection for the internally displaced populations. Positively, the government took steps to establish a national human rights commission.

Security forces unlawfully killed and wounded civilians during infighting over land, control of roadblocks, disarmament operations, and aid distribution. On June 9, at least 13 civilians were killed and 20 injured when fighting broke out between government forces at an aid distribution site in Baidoa.

Civilians were targeted or faced indiscriminate attack during fighting over resources and political positions and control between clan militia and regional forces, particularly in Lower Shabelle, Hiraan, and Galguduud.

The National Intelligence and Security Agency (NISA) and the Puntland Intelligence Service (PIS), which operate without legal authority, arbitrarily arrested and detained individuals without charge or access to legal counsel and family visits. On several occasions, intelligence agents tortured and ill-treated alleged terrorism suspects to extract confessions or provide information.

Military courts continue to try a broad range of cases, including for terrorism-related offenses, in proceedings falling far short of international fair trial standards. By the third quarter of 2017 at least 23 individuals were executed following military court convictions, the majority on terrorism-related charges. Seven defendants, including a child, were sentenced to death for murder on February 13 in Puntland based largely on confessions obtained under coercion by PIS; five were executed in April.

According to UNSOM, AMISOM and other foreign forces were responsible for a significant number of civilian casualties during ground operations against Al-Shabab and in airstrikes. On September 26, an alleged Kenyan air force jet struck the village of Taraka in Somalia’s Gedo region recently recaptured by Al-Shabab, wounding 4 civilians and killing 20 camels.

Accountability for abuses by security forces was almost nonexistent.

Measures at the disposal of troop-contributing countries to improve accountability have not been sufficiently used. AMISOM investigated the unlawful killings of 14 civilians by Ethiopian forces in July 2016 in a village in the Bay region, but never released the findings nor offered compensation to the affected families.

Somalia’s penal code, currently being revised, classifies sexual violence as an “offense against modesty and sexual honor” rather than as a violation of bodily integrity, punishes same-sex intercourse, and imposes criminal penalties for speech considered insulting to authorities.

The Islamist armed group Al-Shabab committed serious abuses such as arbitrary executions, including those accused of spying, collaborating with the government, and at times adultery; forcibly recruiting adults and children; and extorting “taxes” through threats. On October 27, in Sakoow, a woman was stoned to death for allegedly committing adultery.

In late May, Al-Shabab fighters abducted civilians, stole livestock, and committed arson in attacks that caused more than 15,000 people to flee their homes in the highly contested region of Lower Shabelle.

By the year’s end, the risk of famine persisted, with over half of the country’s 12.4 million population still in need of emergency humanitarian assistance.

According to the UN, 1 million people were newly displaced in 2017, bringing the total internally displaced persons (IDP) population to 2.1 million. Many faced dire living conditions, with limited assistance, and faced a range of abuses, including indiscriminate killings, forced evictions, and sexual violence. Between November and May, at least 60,000 people were forcibly evicted, including by government forces. Hundreds of refugees returning from Kenya due to restrictions on asylum space became IDPs.

Humanitarian agencies faced serious challenges in accessing vulnerable populations due to insecurity, restrictions imposed by parties to the conflict, and targeted attacks on aid workers. Foreign counterterrorism legislation, notably US law that could interpret forms of aid as material support for terrorism, also hindered foreign assistance.

Al-Shabab banned most nongovernmental organizations and all UN agencies from areas under its control. It also imposed blockades on government-controlled towns and on occasion attacked civilians who broke them.

Armed groups continued to kill and maim children and target schools. On April 18, unidentified rebel forces fired mortar rounds into a populated area of Mogadishu, hit a school and a home, killing at least two civilians, including an 8-year-old girl, and injuring eight others.

They have also recruited and used children in military operations. Al-Shabab increasingly focused on duksis (Quranic schools) to indoctrinate children, particularly in communities where it sought to assert control such as in Mudug, Galgadud, and Bay regions.

The federal government committed to rehabilitate children linked to Al-Shabab. However, military courts have prosecuted and sentenced children to heavy penalties for terrorism-related offenses in trials that do not meet international juvenile justice standards. In Puntland, at least 11 children were sentenced to death for terrorism-related offenses and murder by first instance military courts although all later had their sentences commuted.

Internally displaced women and girls remain at particular risk of sexual and gender-based violence by armed men, including government soldiers and militia members, and civilians. According to the UN, incidents of reported sexual violence around displacement settlements increased in 2017.

While authorities adopted some measures to improve the capacity of government institutions to tackle impunity for sexual violence, including establishing a sexual violence unit within the Attorney General’s Office, and passing a sexual offenses law in Puntland, implementation was limited. In early 2017, authorities in Puntland condoned a Sharia court-hearing of a group of young men accused of gang-raping two girls in Goldogob town instead of prosecutors pushing for the case to be transferred to criminal justice proceedings under its newly passed sexual offenses act.

Restrictions on Freedom of Expression and Association

Targeted attacks on media, including harassment, and intimidation by federal and regional authorities and Al-Shabab, continued.

On March 12, Abdihamid Mohamed Osman, a technician and editor at Universal TV network, survived a bomb that exploded while he was in his vehicle.

Positively, the federal minister for information committed to reviewing the country’s 2016 media law; proposed revisions failed to bring the law in line with international standards.

Authorities in Somaliland continued to restrict free speech and expression, particularly on issues deemed sensitive, notably the construction of a port and military base by the United Arab Emirates in Berbera town and the relationship with Somalia. Authorities shut down social media for four days during Somaliland’s electoral process, at the request of the national electoral commission. Authorities regularly temporarily detain journalists; on three occasions journalists were criminally charged.

International support focused on building Somalia’s security sector, including regional forces, with limited attention to ensuring fair accountability for abuses. At a London conference on Somalia in May, partners endorsed a plan clarifying the structure of the security forces at national and regional levels.

International donors financially supported the federal government’s controversial amnesty program for former Al-Shabab combatants. In August, one of Al-Shabab’s former leaders, Sheikh Mukhtar Robow, was transferred to Mogadishu; foreign governments did not call for investigations into the serious abuses committed under his leadership.

In March, US President Donald Trump granted the US Defense Department greater authority to conduct operations in Somalia, declaring parts of the country an “area of active hostilities.” The Pentagon acknowledged 30 strikes, 13 in November, and its involvement in at least four joint operations. The Pentagon said it was reviewing reports of civilian casualties in two operations conducted in August in Bariire and Jilib; despite media reports of civilian casualties its assessment found that those killed and wounded in Bariire were all “armed enemy combatants”.

Gulf states, primarily the UAE, increased bilateral military and political support to Somalia’s regional states. They used pressure and financial inducements to challenge the federal government’s “neutral” stance on the diplomatic crisis between Qatar and other Gulf states, exacerbating regional tensions within Somalia.