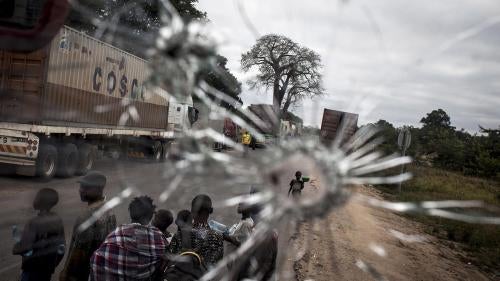 A ceasefire in December 2016 ended armed clashes between the government and the former rebel group, now political party, Resistência Nacional Moçambicana (Mozambican National Resistance, or RENAMO). But members of government security forces and RENAMO-linked armed groups continued to commit abuses with impunity during armed clashes that started in late 2014, including killings, enforced disappearances, kidnappings, arbitrary arrests, and destruction of property.

The country further endured an economic crisis, mainly due to the disclosure of state-owned companies’ debt to foreign banks, which led donors to freeze their contributions to the state budget. Authorities failed to prosecute government officials implicated in the debt scandal, despite an international audit that detailed the transactions and named individuals involved in the process.

Mozambican law enforcement continued its practice of not investigating a range of serious crimes. The cases of 10 high-profile figures, including senior opposition members, state prosecutors, and prominent academics, who were either killed or injured in apparently politically motivated attacks in 2016, remained unresolved. Likewise, the government provided no new information about 15 unidentified bodies found scattered under a bridge between the central provinces of Manica and Sofala, in May 2016. A parliamentary commission established in June 2016 to investigate the case did not publish an account of its findings or state when it would complete its work.

Authorities also failed to investigate human rights abuses allegedly committed by government security forces in 2015 and 2016 in relation to clashes with armed men from RENAMO, such as enforced disappearances, arbitrary arrests and property destruction. In 2016, the United Nations High Commissioner for Human Rights said at least 14 RENAMO officials were killed or abducted across the country in the first quarter of 2016.

In cases investigated by Human Rights Watch, family members of “disappeared” people said that government officials had failed to provide them with information, despite strong evidence that security forces had detained their relative. Authorities also failed to investigate the destruction of homes and crops by security forces in Manica and Sofala provinces, or provide compensation to those affected.

There was also no significant progress in the investigation into a major financial scandal involving three state-owned companies that illegally borrowed over US$2 billion from Credit Suisse and VTB of Russia in 2013 and 2014 without parliamentary approval. The case led to the International Monetary Fund (IMF) suspending its Mozambique program and all 14 international donors freezing aid to the annual budget, pending an investigation and independent audit of the loans. In June, the attorney general published the audit report conducted by Kroll, a British audit firm, which detailed the transactions and individuals involved in the process, including former ministers and former heads of the state intelligence and security service. At time of writing, the government claimed to be investigating the case, but no individual mentioned in the report had been charged.

Abuses in the Mining Industry

In July, videos shared on social media appeared to show Mozambican security forces assaulting artisanal miners at the ruby mines in Namanhumbir, Montepuez, northern Cabo Delgado province, which are co-owned by the British company Gemfields and former generals linked to the ruling party.

The footage showed uniformed officers beating the miners and ordering some of them to beat others who were tied to trees or had their heads buried in the sand. Reacting to the videos, a police spokesman said on July 26 that the officers involved were under investigation but provided no details.

In August, the Bar Association’s human rights commission, after a mission to the Montepuez region, found that security forces in the region had committed abuses against miners, such as killings, beatings, and extortion. The commission urged authorities to investigate and hold perpetrators to account.

These events followed accounts from media and activists in February 2017 that Mozambican police had beaten and raped some Tanzanian miners while they were being deported for working illegally in the country. Mozambique denied the accusations and Tanzania said it was investigating how its nationals were treated.

Attacks on Children and Adults with Albinism

The killings, kidnappings, and physical attacks against people with albinism continued, despite government efforts to stop the violence, including several arrests. In Mozambique and some neighboring countries, people with albinism are hunted for their body parts, which are used for witchcraft.

In March 2017, the United Nations independent expert on the enjoyment of human rights by persons with albinism, Ikponwosa Ero, told the UN Human Rights Council that the situation of people with albinism in Mozambique “requires urgent and immediate attention.” She estimated that more than 100 attacks against people with albinism had occurred in Mozambique since 2014. Many of the victims are children. In September 2017, according to the police, a 17-year-old boy with albinism was killed and his brain removed, in Tete province. Four months earlier, police uncovered an attempt by two parents to sell their child with albinism in the same province. In June, the Malawian press reported that a 12-year-old Malawian boy with albinism had been killed in Mozambique, and police had arrested five people allegedly connected with the crime.

Two years since the decriminalization of homosexuality in Mozambique, the government had still not registered the country’s largest lesbian, gay, bisexual, and transgender (LGBT) group, Lambda. Since January 2016, the government has not made a public statement about Lambda or the rights of homosexuals in the country, despite constant appeals by the UN Human Rights Council for the government to register nongovernmental organizations that work on issues of sexual orientation and gender identity. Homosexuality is widely tolerated in Mozambique, but LGBT people and local activists point to frequent discrimination at work and mistreatment by family members.

Prison overcrowding continued to be a major problem, with prisons that have a total capacity of just over 8,000 holding more than 18,000 people. Authorities blame the overcrowding on slow judicial processes, the large number of illegal detentions, and a lack of alternative forms of punishment for petty crimes. The attorney general has also expressed concern about the overcrowding, which, according to her, was the highest it has been since 2014.

Domestic violence was in the spotlight with two high-profile cases making headlines. In December 2016, the daughter of former President Armando Guebuza was shot dead by her husband during a domestic dispute in their home. As of late November, the case was awaiting trial. In February, the daughter of former President Samora Machel won a court case against her ex-boyfriend, who beat her so badly she lost an eye.

Reacting to the cases, the Association of Women in Legal Careers said the government often fails to investigate and prosecute cases of domestic violence. According to the group, family pressure and obstruction by the police caused many cases to be dropped. Domestic violence against men also made headlines in 2017, after at least three women, in separate cases, allegedly tried to kill their husbands. In reaction to the cases, police said that in the first three months of the year they had registered 210 cases of domestic violence against men and women.

Impact of the Economic Crisis

Mozambique’s economic crisis had a significant impact on the country’s finances, making it harder for people to enjoy basic economic and social rights. The health authorities struggled to purchase medicine, and in March, media reported that there were temporary shortages of basic medicine, such as paracetamol, in at least three provinces: Inhambane, Manica, and Zambezia. In June, media reported that due to the financial crisis, hospitals in Inhambane province did not have food for patients.

In August, the European Union and the United States congratulated President Filipe Nyusi and RENAMO leader Afonso Dhlakama for having their first meeting since February 2015. Held on August 6, the meeting raised expectations for a potential peace agreement by the end of 2017, though no agreement was reached. The EU encouraged the two leaders to work toward a deal that would allow 2018 local elections and 2019 general elections to take place in a climate of peace.

In September, the US pledged US$400 million to fight HIV/AIDS in Mozambique, as part of the president's Emergency Plan for AIDS Relief (PEPFAR). In August, the IMF said it would not resume its assistance programs in Mozambique until authorities provide all information on money that state-owned companies had borrowed from foreign banks.