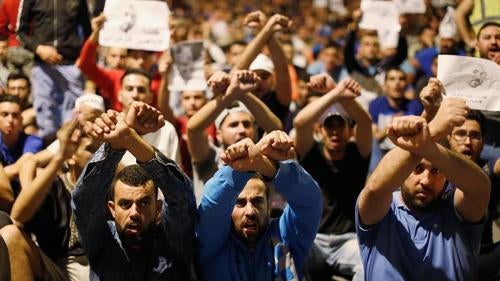 Morocco responded to ongoing demonstrations in the restive Rif region throughout 2017 with its characteristic vacillation between tolerance and repression. Security forces allowed many street protests to proceed against the central government’s alleged neglect of the region’s needs, but, starting in May, moved to arrest activists of the so-called Hirak Rif movement, beating and abusing many of them. Some were subsequently imprisoned after unfair trials. A court imprisoned a well-known journalist-commentator on dubious charges relating to inciting the Hirak Rif demonstrations.

The political process for self-determination of Western Sahara, a territory under Moroccan control, remained stalled with little international mediation or attention. Morocco proposes autonomy under its continued rule but rejects a referendum on independence. The government systematically prevented gatherings in Western Sahara supporting Sahrawi self-determination.

A new trial before a civilian court of 24 Sahrawis accused of involvement in the deaths of policemen during 2010 clashes resulted in their conviction and lengthy prison sentences, an outcome similar to the one in their first trial before a military tribunal. The trial was tainted by apparent due process violations such as the reliance on testimony allegedly obtained under coercion without properly examining allegations of torture.

The Press and Publications Code, adopted by parliament in July 2016, eliminates prison sentences yet imposes fines and court-ordered suspensions of publications or websites as punishment for many nonviolent speech offenses.

Meanwhile, the penal code maintains prison as a punishment for a variety of nonviolent speech offenses, including for crossing Morocco’s long-standing “red lines,” that is “causing harm” to Islam, the monarchy, the person of the king, and the royal family, and “inciting against” Morocco’s “territorial integrity,” a reference to its claim to Western Sahara. Prison also remains a punishment for insulting state institutions and for speech and writings that are perceived as an “apology for terrorism.”

On September 11, 2017, the al-Hoceima Appeals Court increased the three-month prison sentence handed down by a lower court against website editor and journalist Hamid Mahdaoui on July 25, 2017, for inciting participation in an unauthorized demonstration, to one year. The case was based on comments that Mahdaoui made in a public square in al-Hoceima on July 19, supporting the Hirak Rif movement and condemning the government’s decision to ban a demonstration planned for July 20. Among the several citizen journalists and web activists prosecuted in connection with the Rif protests was Ilyass Akallouch, whom the al-Hoceima Court of First Instance sentenced on August 24 to eight months in prison and a MAD20,000 (US$2,000) fine for social media posts that “incite others to participate in unauthorized demonstrations.”

Authorities require but often refuse to issue permits for foreign broadcast media to film in Morocco. On July 25, they deported two Spanish journalists who were covering the Rif protests, including one, Jose Luis Navazo, who had been living in Morocco for 17 years.

Authorities tolerated many marches and rallies throughout the year demanding political reform and protesting government actions, but often forcibly dispersed protests, even when they were peaceful.

In the Rif region, security forces had arrested over 450 Hirak Rif protesters, as of October. The protests began in October 2016, after a fishmonger in al-Hoceima was crushed to death in a garbage truck while trying to rescue his goods that authorities had confiscated.

Many of the detained protesters alleged beatings by police during arrest and said police forced them to sign written statements unread. Some of these allegations were corroborated by reports prepared by forensic doctors appointed by the National Human Rights Council, who had examined detained protesters. Courts convicted protesters on charges that included insulting and physically assaulting members of the security forces, armed rebellion, and destruction of public goods, sentencing them to terms in prison that were mostly 18 months or less.

Officials continue to arbitrarily prevent or impede associations from obtaining legal registration, although the 2011 constitution guarantees freedom of association.

Authorities have kept sealed since 2006 houses belonging to at least two members of the Islamist movement al-Adl wal-Ihsan (Justice and Spirituality), an Islamist movement that questions the king’s claim of spiritual authority, without providing a formal legal basis.

Authorities frequently impeded events organized by local chapters of the Moroccan Association for Human Rights (AMDH), by denying access to planned venues. In a typical instance, on July 8, authorities in the village of Zaouiat Cheikh prevented access of participants to the community center, where AMDH had planned a public conference on human rights. They also sometimes prevented efforts by chapters to comply with document-filing requirements, placing some of these chapters in legal jeopardy.

The government has continued to impose a de facto ban on research missions by Amnesty International and Human Rights Watch since 2015, despite relative unimpeded access of the two organizations for nearly 25 years before then.

As in previous years, authorities expelled several foreign visitors who came to witness human rights conditions in Western Sahara or attend human rights events there. On July 4, Spanish citizens Laura Moreno and Andrea Sáez, who had come to meet with Sahrawi human rights activists were not allowed to deplane in El-Ayoun and were sent back.

Courts failed to uphold due process guarantees in political and security-related cases.

The Code of Penal Procedure, amended in 2011, gives a defendant the right to contact a lawyer after 24 hours in police custody or a maximum of 36 hours if the prosecutor approves this extension. In cases involving terrorism offenses, the prosecutor can delay access to a lawyer for up to six days. The law does not give detainees the right to a have a lawyer present when police interrogate or present them with their statements for signature.

The 2003 counterterrorism law contains an overly broad definition of “terrorism” and allows for up to 12 days of garde à vue (precharge) detention in terrorism related cases.

The Rabat Appeals Court conducted a new trial of 24 Sahrawis convicted by a military court in 2013 for their alleged role in violence that erupted after security forces entered to dismantle a protest encampment set up in Gdeim Izik, Western Sahara. The violence resulted in the deaths of 11 security force members. The appeals court sentenced nearly all of the defendants to prison terms of between 20 years and life, similar to the sentences that the military court handed them in 2013. In its verdict, the court relied on the original police statements from 2010, which the defendants rejected as false. They said they were either coerced or physically forced into signing the statements, including through the use of torture. The court ordered medical examinations, which concluded that torture could neither be proven nor disproven, an unsurprising conclusion given that these examinations, the first of a forensic nature of these defendants, were taking place seven years after the alleged torture took place.

On March 9, a Rabat court of appeals upheld the conviction of French citizen Thomas Gallay on charges of materially aiding persons who harboured terrorist aims, but reduced his prison sentence from six to four years. Gallay’s lawyer, who was not present when the police questioned him, said that police used pressure and deceit to persuade him to sign statements in Arabic, a language that he could not read. The court also convicted Gallay’s eight Moroccan co-defendants, sentencing them to prison terms of up to 18 years. Hundreds of others were serving prison terms on terrorism charges, some of them following unfair mass trials, like those arrested in the “Bellarij” case in 2008.

Between January 1 and October 1, Morocco’s highest court upheld the death penalty in three cases; 11 other death sentences that lower courts pronounced in 2017 were still under review at time of writing. Authorities have not carried out any executions since the early 1990s.

A draft of Morocco’s first law on the right to asylum had yet to be adopted. Since 2013, Morocco’s ad hoc inter-ministerial commission charged with refugee issues has granted refugee cards and one-year renewable residency permits to almost every person that the United Nations High Commissioner for Refugees (UNHCR) recognized as a refugee, totalling 745 persons since 2013, most of them sub-Saharan Africans. As of September 30, UNHCR said it had 2,995 Syrian asylum seekers in its registry. While Morocco has not formally recognized these Syrians as refugees, it allows them to reside in Morocco and to access essential public services, such as health and education, according to UNHCR.

Morocco also granted one-year renewable residency permits to thousands of sub-Saharan migrants who were not asylum-seekers but who met criteria set forth in a 2013 plan.

On June 21, Moroccan authorities granted temporary residence status to 28 Syrian asylum seekers who remained blocked in no-man’s land between Algeria and Morocco after a two-month-long stand-off between the two countries during which time neither agreed to admit them.

The 2004 Family Code, which improved women’s rights in divorce and child custody, discriminates against women with regard to inheritance and procedures to obtain divorce. The code raised the age of marriage from 15 to 18, but judges routinely allowed girls to marry below this age.

On March 17, 2016, the government adopted a revised bill on combatting violence against women (Bill 103-13), and the House of Representatives passed it on July 20, 2016. The draft law remained with the House of Councillors, the parliament’s second chamber, at the end of 2016.

A 2016 law on domestic worker rights is scheduled to go into effect in October 2018, following the adoption in 2017 of necessary implementing regulations. The law requires written contracts for domestic workers and sets 18 as the minimum age for such employment, after a five-year phase-in during which 16- and 17-year-olds can work. It limits weekly working hours and guarantees 24 continuous hours of rest per week and sets a minimum wage and provides for financial penalties for employers who violate the law.

Moroccan courts continued to jail persons for same-sex conduct under article 489 of the penal code, which stipulates prison terms of six months to three years for “lewd or unnatural acts with an individual of the same sex.”

In December 2016, a court in Marrakech acquitted two teenage girls who had been detained for one week and charged with “sexual deviancy” for allegedly hugging and kissing in private. On February 24, two men were sentenced on charges that included violating article 489, to six months in prison and a fine of MAD1,000 (US$107) by a Tangiers court of first instance, after a video showing them engaging in consensual sex was shared on social media.

On December 21, 2016, the Court of Justice of the European Union concluded that 2012 bilateral EU-Morocco agreements liberalizing trade in agriculture and fish were not applicable to Western Sahara, due to the separate and distinct status guaranteed to that territory under the Charter of the United Nations and the principle of self-determination of peoples. The court however overturned a 2015 court decision invalidating the trade agreement.