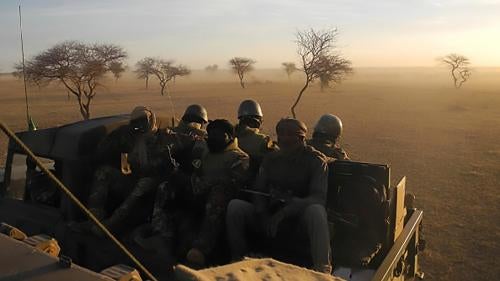 In the north, armed groups made scant progress on disarmament and the government made inadequate progress on the restoration of state authority. This deepened a rule of law and security vacuum, facilitating rampant banditry and displacement. In central Mali, Islamist armed group presence and intimidation of the population steadily increased through the year, resulting in numerous serious abuses including summary executions of local officials and alleged government informants.

Some effort was made toward ensuring justice for victims of abuses committed during the 2012-2013 armed conflict, but the judiciary was reluctant to investigate ongoing abuse by the armed forces. Rule of law institutions remained weak, and corruption endemic, further impeding Malians’ access to basic health care and education.

The spread of militant attacks from north to central Mali and across borders into Burkina Faso and Niger sparked increased diplomatic and military engagement by the international community, leading to a United Nations sanctions regime and the creation of a five-nation counterterrorism military force, the G5 Sahel Joint Force.

In central Mali, Islamist armed groups increasingly imposed their version of Sharia (Islamic law), establishing courts that did not adhere to fair trial standards. They threatened villagers collaborating with authorities, recruited children, destroyed schools, and beat villagers who engaged in cultural practices they had forbidden.

Several civilians were killed during fighting between armed groups, as well as by explosives planted by the groups on major roads. In 2017, humanitarian agencies suffered scores of attacks, mostly by bandits, which undermined their ability to deliver aid.

At least 23 UN peacekeepers with the Multidimensional Integrated Stabilization Mission in Mali (MINUSMA) were killed and 103 wounded in attacks by Islamist armed groups in 2017, bringing the total to 92 killed since MINUSMA’s creation in 2013.

At time of writing, Islamist armed groups still held six foreigners hostage, including a Colombian nun, a French aid worker, American and Swiss missionaries, a Romanian mine worker, and an Australian doctor, all kidnapped within the Sahel region from 2015 to 2017. A Swede and a British-South African held hostage since 2011 were released in 2017. In November, 11 Malian security force personnel kidnapped during operations in 2016 and 2017 were inadvertently killed during a French airstrike on armed Islamists.

During 2017, soldiers allegedly killed and buried at least 15 suspects in common graves, while more than 25 were subjected to enforced disappearance. Dozens of other suspects were subjected to severe ill-treatment during interrogations.

Numerous men and some children accused of crimes against the state and terrorist-related offenses were detained by the national intelligence agency without respect for due process. Some members of the security forces were also implicated in acts of extortion, bribe-taking, and theft, including from detainees.

The military made little effort to hold to account soldiers or militiamen implicated in abuses. However, they took steps to ensure the presence of military police—responsible for monitoring respect for international humanitarian law—during military operations, made progress in operationalizing the Military Justice Directorate in Bamako, and, in October, promised an internal investigation into alleged abuses by their forces in central Mali.

Armed groups in the north and center, including those allied with the government, continued to recruit and use child soldiers. Numerous children suspected of supporting armed groups were detained in state-run detention centers, in contravention of a 2013 protocol stipulating that children were to be placed in a care center managed by UNICEF, the UN children’s rights agency.

During 2017, over 150,000 children were denied the right to education because of insecurity, threats against teachers and school closures in northern and central Mali. Numerous teachers were directly threatened and schools vandalized or destroyed by armed Islamist groups. At least 10 children died during crossfire, intercommunal violence, or explosions.

The Justice Ministry took steps to improve its case management system, and, in late December 2016, set up a special investigations cell to address serious crimes, attached to the Specialized Judicial Unit on Terrorism and Transnational Organized Crime. At year’s end, implementation of the decision had not moved forward.

The August conviction of Aliou Mahamane Touré, former head of the Islamic police force in Gao for crimes against the state, indicates progress towards accountability. The trial of former coup leader Gen. Amadou Haya Sanogo and 17 other members of the Malian security services for the 2012 killing of 21 elite “Red Beret” soldiers was suspended in December 2016.

Judicial authorities failed to open investigations into ongoing violations against civilians by security forces and made little progress in ensuring justice for the victims of violations committed during Mali’s 2012-2013 armed conflict.

The Truth, Justice and Reconciliation Commission, established by presidential executive order in 2014 with a three-year mandate to investigate crimes and the root causes of violence dating back to 1960, made meaningful progress in 2017. The 25-member commission operationalized five regional offices and took over 5,000 statements from victims and witnesses. However, the credibility of the commission was undermined by government’s inclusion of nine armed group members, while excluding victims’ group representatives.

The mandate of the National Commission for Human Rights was strengthened with improved funding and the appointment in May of nine full-time commissioners. However, the commission showed reluctance to investigate abuses by security force personnel.

The Malian judiciary was plagued by neglect and mismanagement, and insecurity led many judicial personnel to abandon their posts in northern and central Mali. Due to the courts’ inability to adequately process cases, hundreds of detainees have been held in extended pretrial detention. However, some effort was made to rehabilitate and improve prison conditions.

In March, under pressure from international donors, the government established the Central Office for the Fight against Illegal Enrichment, mandated by a 2016 law to coordinate anti-corruption efforts.

In April, a new Ministry of Human Rights and State Reform was created by a presidential decree to oversee activities related to rule of law and transitional justice. However, the minister was reluctant to investigate or denounce violations by security force personnel.

In April and October, the National Assembly extended the state of emergency, first declared in 2015. The constitution review process stalled amid protests by opposition parties and civil society that the process had been hijacked by the executive and that proposed changes increased executive powers.

Mali remained a top political priority for France, which, together with the United States, took the lead on military matters. The European Union led on training and security sector reform, and the UN led on rule of law and political stability. These actors were largely reluctant to publicly call for investigations into past and ongoing government violations.

Regional actors acted to combat the spread of Islamist militancy in the Sahel. In January, Mali, Burkina Faso, and Niger established a joint task force to combat rising insecurity along their shared borders.

In July, Mali, Mauritania, Burkina Faso, Niger, and Chad launched the G5 Sahel multinational counterterrorism military force. The creation of G5 Sahel was endorsed by the African Union and welcomed by the UN Security Council. The EU pledged $56 million, the US $60 million and Saudi Arabia $100 million in support of G5-Sahel.

MINUSMA meaningfully contributed to training government forces and members of the judiciary. While the forces increased patrols, MINUSMA struggled to implement its more robust 2016 civilian protection mandate, largely due to persistent lack of equipment and assets.

The situation in Mali remained under investigation by the International Criminal Court (ICC) since 2012. In August, the court ordered former Ansar Dine leader Ahmad Al Faqi Al Mahdi to pay US$3.2 million in reparations after his 2016 conviction for his role in the 2012 destruction of historical and religious monuments in Timbuktu. ICC prosecutor Fatou Bensouda visited Mali in October. Investigations are ongoing but limited due to the precarious security situation.

The UN, EU, Netherlands, Swiss, and Canada took the lead in programs to support the justice sector and address corruption. The United States supported reform of military justice.

In September, UN Security Council Resolution 2374 imposed an asset freeze and travel ban against those who obstruct the 2015 peace accord, commit human rights abuses, recruit child soldiers, hinder aid delivery, or conduct attacks on peacekeepers and other UN personnel. The sanctions will be monitored by a panel of experts.