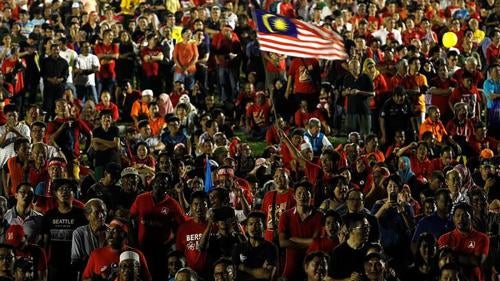 Malaysia’s government continued its crackdown on critical voices and human rights defenders in 2017. With corruption allegations casting a shadow over Prime Minister Najib Razak, the government strengthened abusive laws and facilitated a societal shift toward a more conservative and less tolerant approach to Islam.

Although Prime Minister Najib claimed, at a speech in April 2017, that freedom of speech was “thriving” in Malaysia, the reality is far different. The Communications and Multimedia Act (CMA) has been used repeatedly to investigate and arrest those who criticize government officials on social media. Section 233(1) of the CMA provides criminal penalties of up to one year in prison for a communication that “is obscene, indecent, false, menacing or offensive in character with intent to annoy, abuse, threaten or harass another person.” It has been used against, among others, a blogger who posted an image showing Najib behind bars and, in 2017, individuals who criticized former Chief Minister Adenan Satem after his death.

In May 2017, the government launched its CMA prosecution of the CEO and the editor-in-chief of online news portal Malaysiakini over a video the news portal carried criticizing Attorney General Mohamed Apandi Ali for clearing the prime minister of corruption allegations.

In April, the government threatened to withdraw the publishing license of Chinese language newspaper Nanyang because it published a satirical cartoon about the debate in parliament on Sharia, or Islamic law. The threat was withdrawn only after the newspaper withdrew the cartoon and apologized.

In August, authorities used Malaysia’s restrictive Film Censorship Act to require the deletion of scenes from a film by a Malaysian investigative journalist implicating Malaysian immigration officials in the trafficking of Rohingya girls. Authorities also banned in its entirety Kakuma Can Dance, a film by a Swedish filmmaker about refugees and hip-hop dance in Kenya. Both films were scheduled to be shown during the annual Refugee Festival in Kuala Lumpur.

Malaysia continues to detain individuals without trial under restrictive laws. Both the 1959 Prevention of Crime Act and the 2015 Prevention of Terrorism Act give government-appointed boards the authority to impose detention without trial for up to two years, renewable indefinitely, to order electronic monitoring, and to impose other significant restrictions on freedom of movement and freedom of association, with no possibility of judicial review.

In August, the government passed amendments to the Prevention of Crime Act that effectively eliminated the right of a detainee to be heard. The amendments abolished the detainee’s right to appear before or make representations to either the inquiry officer responsible for presenting the case for detention or to the government-appointed Prevention of Crime Board (POCB) that makes the detention decision.

The similarly restrictive Security Offences (Special Measures) Act, which allows for preventive detention of up to 28 days with no judicial review for a range of “security offenses,” was renewed for an additional five years in April.

Malaysia retains the death penalty for various crimes, and makes the sentence mandatory for 12 offenses, including drug trafficking. Nearly 1,000 people are estimated to be on death row. The government is not transparent about when and how decisions are made to carry out executions, and executed two men for murder on short notice in March 2017 despite a pending clemency petition.

Human rights defenders continue to face legal attacks and arbitrary restrictions on their rights. In March, authorities investigated three members of the Citizen Action Group on Enforced Disappearances (CAGED) under section 505(b) of the Penal Code for making statements with “intent to cause fear and alarm in to the public” after they used the phrase “enforced disappearances” to refer to the unsolved abduction of Pastor Raymond Koh and the disappearance of several other individuals connected to the Christian church.

In the same month, a court sentenced Lena Hendry to pay a fine of RM$10,000 (US$2,062) or face one year in prison for her role in arranging a showing of the documentary film No Fire Zone. In June, lawyer Siti Kassim was charged with “obstructing a public servant” for her actions in challenging the authority of officials conducting a raid on a transgender beauty pageant in April 2016.

SITI ZABEDAH KASIM
In June, lawyer and human rights defender Siti Kasim was charged with “obstructing a public servant” for challenging officials as they raided a private fundraiser...

In June, lawyer and human rights defender Siti Kasim was charged with “obstructing a public servant” for challenging officials as they raided a private fundraiser held in April 2016 by members of the transgender community. To entertain the crowd, some of those attending put on a mock beauty pageant and dressed in outfits representing various countries from around the world.

Officers from the Federal Territories Islamic Department (JAWI) raided the event and locked the ballroom doors to prevent anyone from leaving, while media they had brought with them filmed those present. The JAWI officers did not have a warrant and were not accompanied by any police officers, as required under Malaysian law. Kasim confronted the officers and questioned the legitimacy of the raid. Only when she called the police and they arrived did JAWI unlock the doors, enabling most of the participants to leave. Kasim was then taken to a police station by a JAWI officer, despite identifying herself as a lawyer. Officials released her later that night after a brief detention.

More than a year later, on June 13, 2017, government prosecutors informed Kasim that they were charging her with obstructing a civil servant. If convicted, she faces up to two years in prison, a maximum fine of RM$10,000 (US$2,062), or both. Kasim, who works regularly on rights of the LGBT community and the indigenous population of Malaysia, has been threatened online with rape, beheading, and attacks with acid over her views on LGBT rights and Islam. “Not many transgender [persons] know their rights,” Kasim told Human Rights Watch. “We need to explain to all Malays what their rights are vis-a-vis JAWI and similar religious authorities.”

The government also regularly takes action to block foreign human rights activists from attending events in Malaysia. In June, immigration authorities detained Singaporean activist Han Hui Hui when she attempted to enter the country to attend a human rights event and sent her back to Singapore. In July, government officials detained Adilur Rahman Khan, head of the prominent Bangladesh human rights nongovernmental organization (NGO) Odhikar, when he arrived to attend a conference on the death penalty. Authorities held him for more than 15 hours at the airport before putting him on a plane back to Dhaka.

Police torture of suspects in custody, in some cases resulting in deaths, continues to be a serious problem, as does a lack of accountability for such offenses. In February, detainee Chandran Muniandy was hospitalized with multiple injuries to his head and body and most of his toenails missing; police claimed his injuries resulted from a fall in the toilet.

The Enforcement Agency Integrity Commission (EAIC) announced that it would investigate the death of S. Balamurugan, who died in custody in February, only after a post-mortem found evidence of blunt force injuries. In October, one police inspector was charged with “voluntarily causing hurt” to Balamurugan to extort a confession. At time of writing, no one has been arrested or disciplined in the Munianty case. During the year, at least two other individuals died in custody as a result of untreated medical conditions.

Malaysia is not a party to the 1951 Refugee Convention, and refugees and asylum seekers have no legal rights or status in the country. Over 150,000 refugees and asylum seekers, most of whom come from Burma, are registered with the UN Refugee Agency, UNHCR, in Malaysia but are unable to work, travel, or enroll in government schools. Asylum seekers arrested by authorities are treated as “illegal migrants” and locked up in overcrowded and unhealthy immigration detention centers.

No Malaysians have been held responsible for their role in the deaths of over 100 ethnic Rohingya trafficking victims whose bodies were found in 2015 in remote jungle detention camps on the Thai-Malaysian border. The 12 policemen initially charged in the case were all exonerated and released in March 2017.

The Malaysian government has failed to effectively implement amendments passed in 2014 to Malaysia’s 2007 anti-trafficking law, in particular by taking the necessary administrative steps to provide assistance and work authorization to all trafficking victims who desire it, while ensuring their freedom of movement. Despite these clear failures, the US State Department upgraded Malaysia to Tier 2 in its annual Trafficking in Persons (TIP) Report.

Malaysian authorities regularly prosecute individuals who hold peaceful assemblies without giving notice or participate in “street protests." The Societies Act restricts freedom of association by requiring that organizations with seven or more members register with the registrar of societies. The law gives the minister of home affairs “absolute discretion” to declare an organization illegal, and grants the Registrar of Societies authority over political parties.

In July, the Registrar of Societies compelled the opposition Democratic Action Party to hold new elections for its central executive committee, finding that a previous election was invalid. In November, it threatened to deregister opposition party Bersatu, claiming the name of its youth wing was illegal.

Malaysia has continued its shift towards a more conservative approach to Islam, the majority religion. A bill to increase the punishments that can be imposed by state Sharia courts remains pending in parliament, and in July 2017 the state of Kelantan passed legislation to permit public canings imposed by Sharia courts.

In August, a government minister called for “atheists” to be tracked down, and statues of winged women were removed from a local park after complaints that they were “offensive” to Muslims. In September, Turkish academic Mustafa Akyol, author of a book arguing for liberal Islam, was detained and interrogated by the Federal Territories Islamic Religious Department (JAWI) for giving a talk on Islam without official credentials from religious authorities. Dr. Ahmad Farouk Musa, who organized the talk, was charged with abetting Akyol in the offense and faces up to three years in prison if convicted. The home minister subsequently banned Akyol’s book, along with a collection of scholarly articles by the G25 organization calling for a more moderate approach to Islam.

The abduction of Christian Pastor Raymond Koh by 15 masked men in February, followed by the unexplained disappearance of three other people linked to Christian churches, raised serious fears among the Christian community. At time of writing, all four persons remained missing.

Violence against LGBT people remains a serious concern, highlighted by the murder of a transgender woman Sameera Krishnan in February, and the rape and murder of 18-year-old T. Nhaveen, a young man whose assailants taunted him with anti-LGBT slurs, in June. In a positive development, the Health Ministry, in response to strident criticism from activists and the general public, reframed the terms of a youth video competition, removing language and criteria that stigmatized LGBT identities in favor of language that appears to affirm them.

Malaysia took a step forward in the protection of women’s rights in 2017 by amending its domestic violence law to provide better protection for victims of domestic violence. It also passed a law expanding criminal sanctions for sex offenses against children. Efforts to pass a law to end child marriage were defeated, however, and Malaysia is one of the few countries that does not collect data on the number of children marrying. Marital rape is not a crime in Malaysia.

Malaysia positions itself in the UN and the international community as a moderate Muslim state prepared to stand up to Islamist extremism, earning support from the US and its allies. Malaysia also has continued its engagement with China, its largest trading partner.