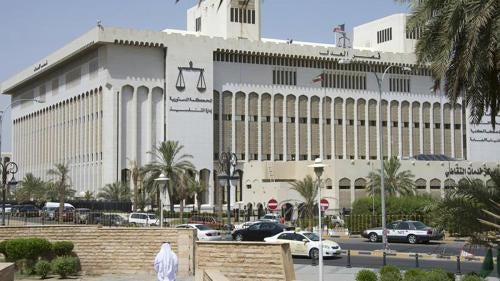 In January 2017, Kuwait carried out its first executions since 2013, hanging seven people.

In October, Kuwait’s Constitutional Court found that an overbroad 2015 law that required all Kuwaiti citizens and residents to provide DNA samples to authorities violated the right to privacy.

Provisions in Kuwait’s constitution, the national security law, and other legislation continue to restrict free speech, and were again used in 2017 to prosecute dissidents and stifle political dissent.

Kuwait continues to exclude thousands of stateless people, known as Bidun, from full citizenship despite their longstanding roots in Kuwaiti territory. In 2017, Kuwait reportedly deported 76 men on suspicion of being gay.

Kuwait is a member of the Saudi-led coalition fighting Houthi-Saleh forces in Yemen, with media reporting that Kuwait had deployed 15 aircraft. Human Rights Watch has documented 87 apparently unlawful coalition attacks in Yemen, some of which may amount to war crimes, yet coalition members have provided insufficient information about the attacks to determine which countries are responsible.

Unlike many of its Gulf neighbors, Kuwait continued to allow Human Rights Watch access to the country and engaged in constructive dialogue with the organization on a range of human rights issues.

Two-thirds of Kuwait’s population is comprised of migrant workers, who remain vulnerable to abuse despite recent reforms.

In 2015, Kuwait issued a new standard contract for migrant workers, and a 2016 administrative decision allowed some migrant workers to transfer their sponsorship to a new employer after three years of work, without their employer’s consent. However, these reforms do not include migrant domestic workers.

In 2015, the National Assembly passed a law granting domestic workers the right to a weekly day off, 30 days of annual paid leave, a 12-hour working day with rest, and an end-of-service benefit of one month a year at the end of the contract, among other rights. In 2016 and 2017, the Interior Ministry passed implementing regulations for the law, and mandated that employers must pay overtime compensation. The ministry also issued a decree establishing a minimum wage of KD60 (US$200) for domestic workers.

Protections for domestic workers are still weaker than those in Kuwait’s labor law. The domestic worker law also falls short by failing to set out enforcement mechanisms, such as inspections of working conditions in households. The law also does not set out sanctions against employers who confiscate passports or fail to provide adequate housing, food, and medical expenses, work breaks, or weekly rest days.

Migrant workers remain vulnerable to abuse, forced labor, and deportation for minor infractions including traffic violations and “absconding” from an employer. In April, a video, apparently filmed by her employer, captured an Ethiopian domestic worker falling from the seventh floor of an apartment building. Authorities reportedly charged the employer for failing to assist the worker.

Kuwaiti authorities have invoked several provisions in the constitution, penal code, Printing and Publication Law, Misuse of Telephone Communications and Bugging Devices Law, Public Gatherings Law, and National Unity Law to prosecute journalists, politicians, and activists for criticizing the emir, the government, religion, and rulers of neighboring countries in blogs or on Twitter, Facebook, or other social media.

Prosecutions for protected speech are ongoing in Kuwaiti courts. Kuwaiti officials and activists reported that many, if not most, initial complaints in these cases are filed by individuals, underscoring the need to further amend broadly written or overly vague Kuwaiti laws to ensure adequate protections for speech and expression. Kuwaiti courts continued to issue deportation orders in some of these cases, including against members of the Bidun population, although Kuwaiti officials reported these orders would not be implemented.

In 2016, Kuwait amended the election law to bar all those convicted for “insulting” God, the prophets, or the emir from running for office or voting in elections. The law is likely to bar some opposition members of parliament from contesting or voting in future elections.

The Cybercrime Law, which went into effect in 2016, includes far-reaching restrictions on internet-based speech, such as prison sentences, and fines for insulting religion, religious figures, and the emir.

Kuwait has a population of about 100,000 stateless persons, known as Bidun, whose predicament dates to the foundation of the Kuwaiti state.

After an initial registration period for citizenship ended in 1960, authorities shifted Bidun citizenship claims to administrative committees that for decades have avoided resolving the claims. Authorities claim that many Bidun are “illegal residents” who deliberately destroyed evidence of another nationality to receive benefits.

Members of the Bidun community have taken to the streets to protest the government’s failure to address their citizenship claims, despite government warnings that Bidun should not gather in public. Article 12 of the 1979 Public Gatherings Law bars non-Kuwaitis from participating in public gatherings. In September, a Bidun man reportedly set himself on fire to protest the status and conditions of the Bidun in Kuwait.

In October, Kuwait’s Constitutional Court found that an overbroad 2015 law that had required all Kuwaiti citizens and residents to provide DNA samples to authorities violated the right to privacy. The law was introduced after the June 2015 suicide bombing of the Imam Sadiq Mosque. Authorities reported to local media at the time that anyone failing to comply with the law would be subject to sanctions, including cancelling their passports and a possible travel ban. In 2016, the United Nations Human Rights Committee found the law imposed “unnecessary and disproportionate restrictions on the right to privacy.”

Kuwaiti personal status law, which applies to Sunni Muslims who make up most Kuwaitis, discriminates against women. For example, some women require a male guardian to conclude their marriage contracts; women must apply to the courts for a divorce on limited grounds unlike men who can unilaterally divorce their wives; and women can lose custody of their children if they remarry someone outside the family. Men can marry up to four wives, without the permission or knowledge of the other wife or wives. A man can prohibit his wife from working if it is deemed to negatively affect the family interests. The rules that apply to Shia Muslims also discriminate against women.

Kuwait has no laws prohibiting domestic violence or marital rape. A 2015 law establishing family courts set up a center to deal with domestic violence cases, but requires the center to prioritize reconciliation over protection for domestic violence survivors. Article 153 of the Kuwaiti penal code stipulates that a man who finds his mother, wife, sister, or daughter in the act of adultery and kills them is punished by either a small fine or no more than three years in prison.

Kuwaiti women married to non-Kuwaitis, unlike Kuwaiti men, cannot pass citizenship to their children or spouses.

Adultery and extramarital intercourse are criminalized, and same-sex relations between men are punishable by up to seven years in prison. In 2017, Kuwait reportedly deported 76 men on suspicion of being gay. Transgender people can be arrested under a 2007 penal code provision that prohibits “imitating the opposite sex in any way.”

Kuwait maintains the death penalty for nonviolent offenses, including drug-related charges. In January, it carried out seven executions by hanging, the first executions since 2013. Human Rights Watch has documented due process violations in Kuwait’s criminal justice system that have made it difficult for defendants to get a fair trial, including in capital cases.

Kuwait joined the Saudi-led coalition that began attacking Houthi and allied forces in Yemen on March 26, 2015, with media reporting that Kuwait had deployed 15 aircraft. Human Rights Watch has documented 87 apparently unlawful coalition attacks in Yemen, some of which may amount to war crimes, that killed nearly 1000 civilians and repeatedly hit markets, schools, and hospitals. Kuwait did not respond to Human Rights Watch inquiries regarding what role, if any, it has played in unlawful attacks in Yemen and if it was undertaking investigations into the role its own forces played in any of these attacks.