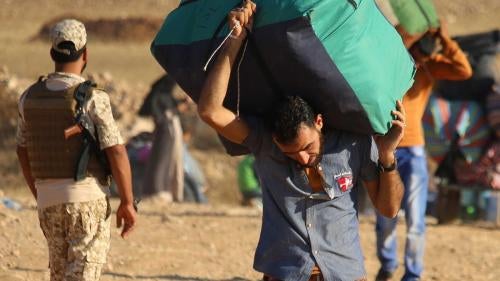 In February 2017, a royal committee convened by King Abdullah II released sweeping proposals to reform Jordan’s judiciary and justice system. In June, parliament passed a new disabilities law that includes the concept of “informed consent” and prohibits discrimination against persons with disabilities.

Despite these reforms, Jordan continued to violate human rights, including restrictions on free expression, free assembly, and women’s rights.

Jordanian law criminalizes speech deemed critical of the king, foreign countries, government officials and institutions, and Islam, as well as speech considered to defame others.

On January 12, Jordanian authorities arrested eight men, including a former member of parliament and a retired senior intelligence officer, apparently in response to critical comments online and peaceful anti-corruption advocacy. Authorities held the men on suspicion of “undermining the political regime,” a vague provision under the “Terrorism” section of Jordan’s Penal Code, but released them on February 8 without formal charges. On October 31, authorities briefly detained well-known cartoonist Emad Hajjaj for publishing a cartoon deemed offensive to Christians.

In 2017, authorities proposed amendments to the country’s 2015 Electronic Crimes Law that criminalize hate speech, defining it vaguely as “any word or action that incites discord or religious, sectarian, ethnic, or regional strife or discrimination between individuals or groups.” The amendments require parliamentary approval and the king’s endorsement to become law.

In July 2017, high-level Jordanian officials used an inquiry into the legality of a Jordanian online magazine to issue statements against Lesbian, Gay, Bisexual, and Transgender (LGBT) people. The ministers of justice and interior wrote separate official letters to the minister of political and parliamentary affairs declaring their broad intolerance of LGBT people and making it clear that the government would not defend the rights of LGBT Jordanians.

In September, authorities threatened the Center for Defending Freedom of Journalists (CDFJ), a regional media freedom organization, over its receipt of foreign funding. The authorities said that CDFJ’s registration category prohibits it from receiving foreign funding under government rules. But prior to 2017 the organization operated without incident or official complaint for 19 years. The group works on behalf of journalists detained across the region and hosts annual workshops and events on media freedom.

Since the amended Public Gatherings Law took effect in March 2011, Jordanians no longer require government permission to hold public meetings or demonstrations. However, organizations and venues continued to seek permission from Jordan’s Interior Ministry to host public meetings and events. In some cases the ministry cancelled public events without explanation.

In May, Jordan’s Supreme Administrative Court upheld a Ministry of Political and Parliamentary Affairs decision denying registration to the Jordanian Civil Gathering Party because some of its founders have “dark skin.” The court argued that Jordan’s political parties law forbids formation of parties on an ethnic basis, even though the party’s platform has no reference to ethnicity or race.

Between 2011 and 2017, over 655,000 persons from Syria had sought refuge in Jordan, according to the United Nations High Commissioner for Refugees (UNHCR). Of these, approximately 79,000 were housed at the Zaatari Refugee Camp in northern Jordan; 53,000 were registered in Azraq Camp, 100 kilometers east of Amman; and 7,100 were at the Emirates Jordan Camp in Zarqa Governorate. The rest were living outside refugee camps. In 2017, Jordan did not permit Syrians to enter the country to seek asylum.

Jordanian officials stated that the country did not receive enough international financial assistance in 2017 to cope with the effects of the refugee crises on its public infrastructure, especially in the areas of public education and health. The UNHCR Jordan office, which coordinates the refugee response, said that by November it had raised only 42 percent of its US$1.2 billion budget goal for 2017.

In 2017, Jordan deported hundreds of Syrian refugees—including the collective expulsion of large families—without giving them a meaningful chance to challenge their removal and failing to consider their need for international protection. During the first five months of 2017, Jordanian authorities deported about 400 registered Syrian refugees each month. In addition, approximately 300 registered refugees each month returned to Syria during that time under circumstances that appeared to be voluntary. Another estimated 500 refugees each month returned to Syria under circumstances that are unclear.

In 2017, authorities continued the implementation of the Jordan Compact, which aims to improve the livelihoods of Syrian refugees by granting new legal work opportunities and improving the education sector. By 2017, labor authorities had issued at least 60,000 work permits for Syrians.

Data compiled by the Jordanian government and published in April found that only 125,000 out of approximately 220,000 school-age Syrian refugee children were enrolled in formal education in Jordan, lower than previous estimates. Jordan implemented programs to reach out-of-school refugee children and waived documentation requirements for them to enroll in school.

Between January and June 2017, Jordanian authorities allowed limited deliveries of humanitarian aid to the tens of thousands of Syrians in unorganized camps along the border with Syria facing limited access to food, water, and medical assistance. In October, authorities announced that no more aid deliveries would be permitted from Jordanian territory.

Article 9 of Jordan’s nationality law does not allow Jordanian women married to non-Jordanian spouses to pass on their nationality to their spouse and children. In 2014, Jordanian authorities issued a cabinet decision purporting to ease restrictions on non-citizen children of Jordanian women’s access to key economic and social rights. By September 2017, the government distributed at least 66,000 special ID cards, but affected persons reported officials’ lack of follow-through on promised reforms, especially regarding the acquisition of work permits and drivers’ licenses.

In August, Jordanian lawmakers abolished article 308 of the country’s 1960 penal code, an infamous provision that allowed perpetrators of sexual assault to avoid punishment if they married their victims. Lawmakers also amended article 98 to state that perptrators of crimes “against women” cannot receive mitigated sentences. The provision leaves a loophole, however, under article 340 of the same law, which allows for mitigated sentences for those who murder their spouses discovered committing adultery.

In 2017, Jordanian lawmakers overhauled the country’s criminal procedure law to create a legal aid fund to provide lawyers for suspects who cannot afford them.

Jordanian authorities executed 15 Jordanian men on March 4 by hanging. Those executed included 10 convicted in six terrorist attacks between 2003 and 2016, and five convicted in murder cases. They were the first executions since February 2015.

In May, authorities detained policemen allegedly involved in the death in custody of an 18-year-old man. The “torture” trial of five policemen in the Police Court relating to the September 2015 death in detention of 49-year-old Omar al-Nasr remained ongoing as of December 2017.

Local governors continued to use provisions of the Crime Prevention Law of 1954 to place individuals in administrative detention for up to one year, in circumvention of the Criminal Procedure Law. The National Center for Human Rights reported that 30,138 persons were administratively detained in 2016, some for longer than one year.

Jordan received approximately US$1.279 billion in economic and military assistance from the United States in 2017, according to the Congressional Research Service. The US did not publicly criticize human rights violations in Jordan in 2017, except in annual reports.

Jordan is a member of the Saudi-led coalition fighting the Houthis in Yemen. Human Rights Watch has documented 87 apparently unlawful coalition attacks in Yemen, some of which may be war crimes, which have killed nearly 1,000 civilians. Jordan did not respond to Human Rights Watch inquiries regarding what role, if any, it has played in unlawful attacks in Yemen and if it was undertaking investigations into the role its own forces played in any of these attacks.

On March 29, Jordan failed to arrest Sudanese President Omar al-Bashir after allowing him to enter the country to attend the 28th summit of the Arab League even though al-Bashir has been a fugitive from the International Criminal Court (ICC) since 2009 and Jordan is an ICC member.

In March, commenting on Jordan’s execution of 15 people convicted for terrorism, the EU reiterated its strong opposaition to death penalty. In June, the EU report on EU-Jordan relations highlighted some shortcomings in freedom of expression and women’s rights. In July, the EU and Jordan held their 12th Association Council meeting.