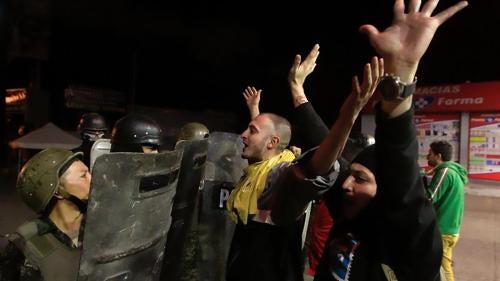 Violent crime is rampant in Honduras. Despite a downward trend in recent years, the murder rate remains among the highest in the world. Journalists, environmental activists, and lesbian, gay, bisexual, and transgender (LGBT) individuals are among those most vulnerable to violence. Efforts to reform the institutions responsible for providing public security have made little progress. Marred by corruption and abuse, the judiciary and police remain largely ineffective. Impunity for crime and human rights abuses is the norm.

The Mission to Support the Fight against Corruption and Impunity in Honduras (MACCIH), established in 2016 through an agreement between the government and the Organization of American States (OAS), has successfully promoted the passage of legislation aimed at curbing illegal funding for political campaigns.

In January 2017, President Juan Orlando Hernández announced that the Special Commission for Police Reform Restructuring will extend its mandate until 2018. As of May, nearly 4,000 of the more than 9,000 police officers evaluated by the commission had been removed, including many for alleged involvement in corruption or criminal acts. However, none of the police officers expelled upon orders of the commission has been convicted to date for alleged involvement in criminal activities including human rights abuses.

Judges face interference from the executive branch and others, including private actors with connections in government. On June 30, the former vice-president of the defunct Judiciary Council, Teodoro Bonilla, was found guilty of influence peddling. Using his authority as a senior official of the judicial oversight body, Bonilla pressured two judges into favoring relatives of his who were charged with illegal weapons possession and money laundering.

Attacks on Journalists and Restrictions on Freedom of Expression, Association, and Assembly

Twenty-five journalists were murdered between 2014 and 2016 according to the human rights ombudsman, CONADEH, which also revealed in its 2016 report that 91 percent of killings of journalists since 2001 remain unpunished. Most recently, journalist Carlos William Flores was shot and killed by unidentified gunmen on a motorcycle in Cortes, near the Guatemalan border. Flores directed a television program, “Sin Pelos en la Lengua,” which was critical of major agribusiness enterprises linked to deforestation in the area.

In February 2017, Congress approved a new penal code making it a criminal offense—punishable by a four to eight-year prison sentence—for individuals or media outlets to engage in the “apology, glorification, [or] justification” of terrorism. The new legislation also defines as terrorist offenses any form of “illegal association” and acts “causing fear, putting in grave risk, or systematically and indiscriminately affecting the fundamental rights of the population or a part of it, the internal security of the State or the economic stability of the country.” These vague and unreasonably broad provisions could conceivably be used to bar peaceful protests and association meetings as terrorism.

The Inter-American Commission for Human Rights (IACHR) and the Office of the UN High Commissioner for Human Rights (OHCHR) both expressed concern about the ambiguous formulation of the law and its potential to arbitrarily restrict freedom of expression and of the press.

To date, eight men have been charged with the murder in March 2016 of environmental and indigenous rights activist Berta Cáceres, including an army major and the former environment manager of Desarrollo Energético S.A. (DESA), the company behind the Agua Zarca dam project that Cáceres was campaigning against at the time of her death.

The Mechanism for the Protection of Journalists, Human Rights Defenders and Operators of Justice, created in 2015, suffered from a lack of adequate resources and staffing, according to local activists.

Homophobic violence is a major problem in Honduras. Several UN agencies working in Honduras have noted that sexual violence against LGBT individuals forces them into “internal displacement” or to flee the country in search of international protection.

In July 2017, David Valle, project coordinator of the Center for LGBTI Cooperation and Development, was stabbed by a stranger in his home in Tegucigalpa. Valle had received repeated threats in the past. He survived the attack.

Under the criminal code, abortion is illegal without any exceptions in Honduras, and women and girls who terminate pregnancies can face prison sentences of up to six years. On May 5, 2017, the National Congress of Honduras voted against modifying the existing criminal code to allow abortion in cases of rape, grave fetal malformations and grave risks to the health of the woman. The law that remains in force also sanctions abortion providers and those who assist with procedures.

Rights of the Child

In July 2017, the Honduran Congress unanimously passed a bill making all child marriage illegal. The new bill replaces legislation that previously allowed for girls to marry at 16 with permission from family. According to UNICEF, a third of Honduran girls are married before 18.

In May 2017, President Juan Orlando Hernández launched an initiative to revise the criminal code to allow children as young 12 to be prosecuted as adults, rather than through the existing juvenile justice system, in violation of international standards.

Inhumane conditions, including overcrowding, inadequate nutrition, and poor sanitation, are endemic to Honduran prisons. Designed to hold up to 8,000 inmates, the country’s penal institutions held more than 17,500 in 2016, the last year for which reliable figures were available. Prison guards at many facilities have effectively relinquished control over the prison grounds to the inmates.

At the behest of the Mission to Support the Fight against Corruption and Impunity in Honduras (MACCIH), Congress passed the Law on Clean Politics, which came into force in March 2017. The law created a framework to prevent organized crime from contributing to political campaigns and to hold parties and candidates accountable for financing their campaigns illegally. In July 2017, the MACCIH announced that it would investigate the funding and government concession granted to DESA for the Agua Zarca Dam project for possible corruption and money laundering.

For fiscal year 2017, the US Congress allotted US$95.3 million in bilateral aid to Honduras. Members of Congress reintroduced the “Berta Caceres Human Rights in Honduras Act” (H.R. 1299) on March 2, 2017. The bill would suspend US funding for the country’s police and military operations until the Honduras government prosecutes and convicts those who ordered and carried out the murder of Cáceres, in addition to other killings and attacks against other activists; investigate and prosecute members of military and police forces who have allegedly violated human rights; withdraw the military from domestic policing; establish effective protections for human rights defenders; and strengthen rule of law.

In May 2016, after prosecutors filed murder charges against an employee of DESA, the Dutch development bank, FMO, and the Finnish Fund for Industrial Cooperation, Finnfund, announced they would suspend payments of their loans to the Agua Zarca Dam. In June 2017, both funders told the Guardian that they would withdraw completely from the Agua Zarca project. The third and largest investor in the project, the Central American Bank of Economic Integration (CABEI), also announced that it would no longer fund the project.