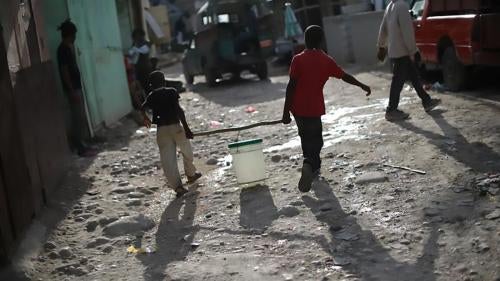 Political instability in 2017 hindered the Haitian government’s ability to meet the basic needs of its people, resolve long-standing human rights problems, or address continuing humanitarian crises. The United Nations peacekeeping mission operating in Haiti for the past 13 years ended in October. A smaller mission replaced it.

More than 175,000 individuals remained displaced in the aftermath of October 2016’s Hurricane Matthew, and many more faced food insecurity due to widespread damage to crops and livestock.

As of September 2017, authorities had failed to assist many of the nearly 38,000 individuals still living in displacement camps since the 2010 earthquake in resettling or returning to their places of origin. The country’s most vulnerable communities continue to face environmental risks, such as widespread deforestation, pollution from industry, and limited access to safe water and sanitation. Almost one-third of people live with food insecurity due to the ongoing drought affecting much of the country.

Since its introduction by UN peacekeepers in 2010, cholera has claimed more than 9,500 lives and infected more than 800,000 people. Cholera cases surged in October 2016 in communities most impacted by Hurricane Matthew. There were more than 41,000 suspected cases and 440 deaths in 2016. The number of cases has since declined significantly due to intensified cholera control efforts, including an ambitious campaign in which more than 800,000 people were vaccinated. Only 11,916 suspected cases of cholera and 118 deaths had been reported from January to October 2017.

In October 2015, elections were deferred indefinitely due to allegations of fraud. To thwart a constitutional crisis when President Michel Martelly’s term ended in February 2016 without an elected successor, the National Assembly selected Jocelerme Privert as a provisional president until a new one could be elected.

In June 2016, a special commission confirmed fraud and irregularities in the 2015 presidential and run-off parliamentary elections and scheduled a new first-round presidential election to be held in October. The elections were further postponed due to Hurricane Matthew and finally took place in November 2016. Jovenel Moïse won 56 percent of the vote. In response to fraud allegations made by opponents, an electoral tribunal conducted a verification process and confirmed Moïse’s victory in January. Moïse was sworn in on February 7, 2017.

Haiti’s prison system remained severely overcrowded, with many inmates living in inhumane conditions. In 2016, the United Nations estimated that nearly all inmates in Haiti’s national prison system have access to less than one square meter of space and most are confined for 23 hours a day. According to the UN, overcrowding is largely attributable to high numbers of arbitrary arrests and the country’s large number of pretrial detainees. In May 2017, Haitian prisons housed more than 10,000 detainees, 71 percent of whom were awaiting trial.

Illiteracy is a major problem in Haiti. According to the UN Development Fund, approximately one-half of all Haitians age 15 and older is illiterate. The quality of education is generally low, and 85 percent of schools are run by private entities that charge school fees that can be prohibitively expensive for low income families. More than 500,000 children and youth remain out of primary and secondary school. Hurricane Matthew significantly impacted access to education, damaging 1,633 out of 1,991 schools in the most hard-hit areas.

The Human Rights Committee has called on Haiti to continue investigations into financial and human rights crimes allegedly committed during former President Jean-Claude Duvalier’s tenure as president from 1971-1986. It has called on Haiti to bring to justice all those responsible for serious human rights violations committed during that time. Allegations of violations include arbitrary detentions, torture, disappearances, summary executions, and forced exile.

Duvalier died in 2014, six months after the Port-of-Prince Court of Appeal ruled that the statute of limitations could not be applied to crimes against humanity and ordered that investigations against him should continue. As of November 2017, a re-opened investigation into crimes committed by Duvalier’s collaborators remained pending.

Gender-based violence is a widespread problem. Haiti does not have specific legislation against domestic violence, sexual harassment, or other forms of violence targeted at women. Rape is only criminalized according to a 2005 ministerial decree.

In March 2016, the UN Committee on the Elimination of Discrimination Against Women called on Haiti to expedite the adoption of a draft law on violence against women. The political crisis prevented progress towards consideration of the bill or a similarly pending criminal code reform that would address gaps in protection. Destruction from Hurricane Matthew has forced many people to migrate to Port-au-Prince, leaving women and children in temporary shelters and camps, where they are more vulnerable to abuse.

Lesbian, gay, bisexual, and transgender (LGBT) persons continue to suffer high levels of discrimination. In June 2017, the Haitian Senate introduced a bill regulating conditions for the issuance of the Certificat de Bonne Vie et Mœurs, a document that many employers and universities require. The bill lists homosexuality, alongside child pornography, incest, and commercial sexual exploitation of children, as a reason to deny a citizen a certificate.

In August 2017, the Haitian Senate passed another bill calling for a ban on gay marriage, as well as any public support or advocacy for LGBT rights. The bill states that “the parties, co-parties and accomplices” of a homosexual marriage can be punished by three years in prison and a fine of about US$8,000.

The Senate approved both these bills, which were awaiting a vote in the Chamber of Deputies as of November 2017.

Widespread use of child domestic workers—known as restavèks—continues. Restavèks, most of whom are girls, are sent from low-income households to live with wealthier families in the hope that they will be schooled and cared for in exchange for performing light chores. Though difficult to calculate, some estimates suggest that between 225,000 and 300,000 children work as restavèks. These children are often unpaid, denied education, and physically or sexually abused. Haiti’s labor code does not set a minimum age for work in domestic services, though the minimum age for work in industrial, agricultural, and commercial enterprises is 15. In February 2016, the UN Committee on the Rights of the Child called on Haiti to criminalize the practice of placing children in domestic service.

At least 200,000 Dominicans of Haitian descent and Haitian migrants working in the Dominican Republic re-entered Haiti between June 2015 and May 2017, after Dominican officials deported more than 27,000 people, along with another 24,254 who were deported without official documentation—in accordance with a controversial 2015 regularization plan for foreigners in the Dominican Republic. Many others left under pressure or threat. Many deportations did not meet international standards and many people have been swept up in arbitrary, summary deportations without any sort of hearing.

Some of the poorest arrivals live in unofficial camps in the Anse a Pitres area, in harsh conditions with little or no access to basic services. Humanitarians relocated 580 families from these camps into housing in April and May 2016.

In March, as insisted upon by Haiti, the UN Human Rights Council abruptly discontinued the mandate of the independent expert on the situation of human rights in Haiti, established in 1995.

The UN Stabilization Mission in Haiti (MINUSTAH) has been operating since 2004 and has a mandate to contribute to efforts to improve public security, protect vulnerable groups, and strengthen the country’s democratic institutions. Following the end of MINUSTAH’s mandate in October 2017, the UN adopted a new, smaller peacekeeping mission, the UN Mission for Justice Support in Haiti (MINUJUSTH). This successor mission began on October 16, 2017, and was slated to run for an initial six months.

In October 2016, the UN deputy secretary-general announced the UN’s new approach to cholera in Haiti, which included intensifying efforts to treat and eliminate cholera, and establishing a trust fund to raise $400 million to provide “material assistance” to those most affected by the epidemic. In a special session of the UN General Assembly in December 2016, the secretary-general apologized on behalf of the UN’s role in the cholera outbreak, calling the provision of material assistance a “concrete expression" of the organization’s "regret" for the suffering of many Haitians. As of November 2017, only $13 million had been pledged to the New Approach from 33 member states.

As of November 2017, no consultations had taken place between the UN and victims of cholera on the development of the material assistance package. Meanwhile, the UN has stated a preference for moving forward with community-based assistance projects instead of individual assistance for those whose family members have died from cholera. Victim advocates have criticized this as a departure from the promise to place victims at the center of the development of the new package.

In August 2016, a United States federal court dismissed an appeal filed in 2013 by the Institute for Justice and Democracy in Haiti and the Bureau des Avocats Internationaux on behalf of 5,000 victims of the epidemic. In August 2017, a federal judge dismissed the only remaining class-action suit seeking compensation for Haitians from the UN, affirming the organization’s assertion of immunity.

According to figures from the UN Office of Internal Oversight Services, at least 102 allegations of sexual abuse or exploitation have been made against MINUSTAH personnel since 2007.

The Temporary Protected Status (TPS) for Haitians in the US is set to end in July 2019, and would affect an estimated 60,000 Haitians who were permitted to stay in the US following the 2010 earthquake. After that time, they will lose permission to work legally in the US and face deportation back to Haiti.