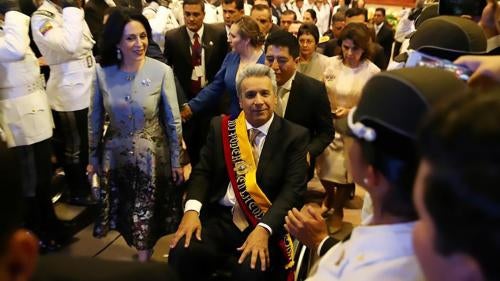 In May, Lenin Moreno took office after winning a closely contested presidential election. Unlike his predecessor, Rafael Correa, President Moreno has publicly embraced respect for free speech and promised to deliver a more tolerant government.

In September, President Moreno initiated the process to carry out a plebiscite in early 2018 in which Ecuadoreans can vote on a series of proposals, including reversing indefinite re-election of public officials, and ending statutes of limitations for sexual crimes against children.

President Moreno has said he will respect press freedom, and ended his predecessor’s practice of publicly threatening and harassing independent journalists, human rights defenders, and critics. He also appointed a new team to head public media outlets, which have begun to adopt an editorial line independent of the government.

However, a 2013 communications law that gives the government broad powers to limit free speech remains on the books. It requires that all information disseminated by media be “verified” and “precise,” opening the door to retaliation against media critical of the same government that decides what meets these vague criteria. It also prohibits “media lynching,” defined as “repeatedly disseminating information with the purpose of discrediting or harming the reputation of a person or entity.” And it prohibits “censorship,” defined as the failure of private media outlets to cover issues the government considers to be of “public interest.” A government plan to reform the law had not yet materialized at time of writing.

Since its creation, the Superintendency of Information and Communication (SUPERCOM), a government regulatory body created by the 2013 communications law and separate from the Communications Ministry (SECOM), has in dozens of cases ordered media outlets and journalists to “correct” or retract reports, including opinion pieces and cartoons, or to publicly apologize for their content. SUPERCOM has also accused outlets of engaging in “censorship” by not publishing information that officials deem important.

In April, President Correa said on TV that media had engaged in censorship for failing to reproduce reporting by an Argentinian newspaper that claimed to implicate the opposition’s presidential candidate in a corruption scandal. Days later, SUPERCOM fined seven media outlets for the same offence.

SUPERCOM has drastically diminished the amount of sanctions imposed since Moreno took office.

Criminal defamation remains a potent means of punishing government critics, despite a 2014 legal reform narrowing the crime’s definition. In April, before leaving office, Correa brought a defamation case against Martin Pallares, a journalist who had published an article that was critical of Correa. In October, an appeals court confirmed Pallares’ innocence. The ruling cited case law from the Inter-American Court of Human Rights that states that public officials are subject to greater scrutiny.

The former president, his political party and its members, state media outlets, and state agencies have repeatedly sought to make use of US copyright law in efforts to have critical images and documents removed from the internet. Users sometimes manage to restore content, after a legal process that can take weeks. In 2017, several Twitter accounts were reportedly blocked after publishing information critical of the government or its officials.

In 2015, President Correa issued a decree confirming broad government powers to intervene in the operations of nongovernmental organizations (NGOs), including the power to dissolve them if authorities deem that they had “compromise[d] public peace” or had engaged in activities different from those they identified when registering with the government.

In December 2016, the Ministry of the Interior asked the Environment Ministry to shut down Acción Ecológica, an environmental organization. Two days earlier, the group had called for an investigation into attacks against indigenous and environmental rights in Morona Santiago province, where a state of exception was in force until February 2017.

The Ministry of the Interior requested the dissolution, alleging that Acción Ecológica incited and supported violent acts. The accusation was related to the organization’s efforts to inform and mobilize the public against the San Carlos-Pananza mining concession. The Ministry of the Interior also accused the organization of deviating from its objectives and interfering with public policy. After a national and international outcry—which included condemnation by a group of UN human rights experts—the Environment Ministry rejected the request to dissolve the group.

In October, President Moreno replaced Correa’s decree with a new one that limits some of its vaguely worded language, but maintains ambiguous grounds for dissolving civil society organizations. A proposal to adopt a law that could enact Correa’s presidential decree permanently, but may be modified during its discussion in Congress, was pending before the National Assembly at time of writing.

In November, the Environment Ministry authorized the Pachamama Foundation, an environmental group that was arbitrarily closed using Correa’s decree in 2013, to start operating again.

Corruption, inefficiency, and political interference have plagued Ecuador’s judiciary for years. President Correa received a popular mandate in a 2011 referendum to overhaul the justice system.

As part of its sweeping judicial reforms, however, the Council of the Judiciary, which in practice lacks independence from the executive, appointed and removed hundreds of judges, including all magistrates of the National Court of Justice, undermining judicial independence.

In August, a series of leaked emails suggested that President Correa, his private secretary, the Council of the Judiciary, and the Justice Ministry pressured judges, prosecutors, and public defenders to adopt specific decisions in several court cases. President Correa did not deny the authenticity of these emails, and claimed he was “doing his job.” After the leak, dozens of judges who had been punished by the Council of the Judiciary made public allegations of political interference in their decision-making.

On December 14, 2016, a police officer died and several others were injured during a confrontation between the military and indigenous Shuar people in Morona Santiago province, when a small group of Shuar people attempted to take over a mining camp that they claim was built on ancestral lands without their consent.

The government mobilized nearly 1,000 military and police officers and declared a state of emergency, suspending certain rights in the province, which ended in February. Indigenous leader Agustin Wachapá, president of the Interprovincial Federation of Shuar Peoples, was charged with allegedly “inciting discord” with a Facebook post on December 18, 2016, in which he called on the Amazonia people to mobilize against the military presence, and said he did not recognize Correa as Ecuador’s president. Wachapá spent four months in pretrial detention in a maximum security prison before being released in April 2017. His trial was ongoing at time of writing.

In June, President Moreno pardoned five citizens from Pastaza province who had been sentenced to 6 to 12 months in prison for the vaguely defined crime of “resistance” during nationwide protests in 2015. A sixth activist from Morona Santiago province was also pardoned. In July, a court acquitted 12 Saraguro indigenous people who had been accused of interrupting public services in 2015 by closing roads during indigenous rights demonstrations.

In May, CONAIE, an umbrella group of indigenous organizations, submitted a proposal to the National Assembly, requesting that legislators issue an amnesty in favor of nearly 200 of members of indigenous peoples whom they claim have been arbitrarily prosecuted. In November, Congress’ Justice Commission recommended that all of the requests be archived, except for one individual’s case that remains under consideration.

In 2016, a series of videos were leaked to the public showing prison guards beating inmates, some of them naked, and subjecting them to electric shocks at the Turi detention center in Azuay province. Public defenders filed a habeas corpus request, demanding that measures be implemented to protect prisoners. A judge approved the petition. The Attorney General’s Office opened an investigation, but later watered it down by changing its grounds from torture to the possibility that the guards were responsible for “overreaching in the execution of an act of service.”

In February, the Attorney General’s Office declined to accuse 34 out of the 49 officers implicated, and decided that it could not assign individual responsibility to any officer. In August, the judge dismissed charges against all of the officers who had been charged.

A truth commission set up by the Correa administration to investigate government abuses from 1984 to 2008 (from the beginning of the repressive presidency of León Febres Cordero until Correa took office) documented 136 cases of gross human rights violations involving 456 victims, including 68 extrajudicial executions and 17 disappearances. A special prosecutorial unit created in 2010 to investigate the cases has initiated judicial procedures in fewer than 10 of them, and progress on those has been slow.

The right to seek an abortion is limited to instances in which a woman’s health or life is at risk, or when a pregnancy results from the rape of a “woman with a mental disability.” Fear of being criminally prosecuted for having an abortion drives some women and girls to have illegal and unsafe abortions and impedes health care and services for victims of sexual violence. The Prosecutor’s Office reports that 184 women have been prosecuted since August 2014 for having a “voluntary abortion.”

Government statistics released in 2010, the latest year for which data is available, indicate that one in four women and girls over 15 years old in Ecuador has been a victim of sexual violence.

In October, after a series of scandals regarding sexual violence against children were made public, the Education Ministry revealed that it had recorded 882 such cases that had occurred in schools between 2014 and 2017. Impunity in those cases remains the norm.

Same-sex couples are not allowed to marry in Ecuador. Since 2008, civil unions are recognized but do not accord the full range of rights enjoyed by married couples, including the ability to adopt children.

The government continued in 2017 to refuse to participate in hearings before the Inter-American Commission on Human Rights (IACHR), and said it would not comply with the commission’s recommendations.

In August, the UN Committee on the Elimination of Racial Discrimination asked Ecuador to investigate allegations by rights groups that the conflict with the mining company in Morona Santiago province and the deployment of security forces to the region had caused the forced displacement of dozens of Shuar families.

In February, the Inter-American Court of Human Rights ruled that Ecuador was responsible for an enforced disappearance in 1995 and for failing to conduct a diligent investigation into the case. Despite the fact that an official Truth Commission report had concluded the victim had been forcibly disappeared, Ecuador denied before the court that state agents were responsible.

Throughout 2017, the UN Committees on Migrant Workers, on the Elimination of Racial Discrimination, and on Enforced Disappearances evaluated Ecuador’s compliance with UN treaties. They raised concerns, including lack of protection of indigenous peoples in voluntary isolation; lack of measures to prevent violence against rights defenders; insufficient efforts to confront human trafficking; lack of due process and proper judicial remedies for people facing deportation; and slow progress made in prosecuting cases documented by the Truth Commission, among other concerns.

In August, Moreno expressed concern about the existence of “political prisoners” in Venezuela, a radical departure from Correa’s strong support of the Nicolás Maduro government. More than 39,000 Venezuelans have entered Ecuador since Venezuela’s crisis deepened in 2016, according to official data. Most request temporary residency permits. Many Venezuelans have applied for refugee status, but local groups were not aware at time of writing of any case in which they had been granted such status by Ecuador’s government.