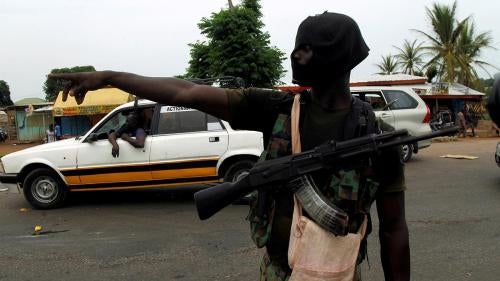 Cote d’Ivoire continued the process of moving away from the successive and bloody political crises of 2000-11, with the United Nations ending a 13-year peacekeeping mission in June. However, ongoing indiscipline by members of the security services and violent army mutinies demonstrated the precariousness of the country’s newfound stability.

President Alassane Ouattara promulgated a new constitution in January, which establishes a vice president position and a second legislative chamber, with one-third of its members appointed by the president. While the new constitution removed a divisive nationality clause, requiring a presidential candidate’s father and mother to be Ivorian, many of the other root causes of past conflict remained unaddressed, particularly a politicized judiciary and simmering conflicts over land.

The prevalence of arbitrary arrests, mistreatment of detainees, and unlawful killings by the security forces lessened again in 2017, but investigations and prosecutions of those who commit abuses were rare. Although Côte d’Ivoire’s press largely operated without restrictions, laws criminalizing publication of false information were on occasion used to unfairly detain journalists and several pro-opposition newspapers were temporarily suspended.

Progress in delivering justice for victims of the 2010-11 post-election violence remained slow, with the vast majority of perpetrators of human rights abuses—from across the military-political divide—not yet held accountable. The International Criminal Court (ICC) continued the trial of former President Gbagbo and Charles Blé Goudé, a former youth minister and leader of a pro-Gbagbo militia, and is also investigating crimes committed by pro-Ouattara forces during the 2010-11 crisis.

At least 15 people died in a wave of mutinies and demonstrations by demobilized soldiers. Thousands of soldiers mutinied in January and May, demanding unpaid bonuses and backpay. On both occasions, soldiers seized control of Bouake, Côte d’Ivoire’s second largest city, for several days and blocked roads in Abidjan and other towns, killing at least four people, several from stray bullets. The mutineers only returned to their barracks after the government paid them 12 million CFA (US$21,000).

The mutinies triggered sporadic demonstrations by other elements of the security forces and demobilized fighters, leaving 11 more dead, including four ex-soldiers killed in a clash with police on May 23. Serving and demobilized soldiers were also implicated in a series of attacks on police and gendarme installations.

Many members of the security forces, including senior army officers, continued to engage in racketeering and extortion. Several army commanders allegedly responsible for atrocities during the 2002-03 armed conflict and 2010-11 crisis were promoted in January.

Mutinying soldiers in May discovered an arms cache in Bouake, underscoring the failure of Côte d’Ivoire’s disarmament process to secure weapons hidden in private arsenals. The owner of the property where the arms were discovered, a senior aide to National Assembly president Guillaume Soro, was arrested and detained on October 9.

Côte d’Ivoire’s Special Investigative and Examination Cell, established in 2011, continued its investigations into human rights crimes committed during the 2010-11 violence. The cell has charged high-level perpetrators from both sides, including several pro-Ouattara commanders now in senior positions in the army. However, the only national civilian trials so far are those of Simone Gbagbo and General Dogbo Blé, the ex-leader of President Gbagbo’s Republican Guard, convicted April 14 with five others for the kidnapping and murder of four foreigners on April 4, 2011.

Human rights groups acting on behalf of victims refused to participate in Simone Gbagbo’s trial, which was marred both by fair trial concerns and the prosecution’s failure to present sufficient evidence to fully explore her role during the 2010-11 crisis. Simone Gbagbo is also wanted by the ICC on four counts of crimes against humanity, but so far the Ivorian government has refused to transfer her to The Hague. Neither the special cell nor the ICC are investigating crimes committed during election-related violence in 2000 or the 2002-2003 armed conflict.

The ICC trial of Laurent Gbagbo and the former youth minister and militia leader Charles Blé Goudé for crimes against humanity committed during the 2010-11 crisis continued in 2017. The ICC also intensified its investigations into crimes committed by pro-Ouattara forces during the crisis, but has yet to issue arrest warrants. President Ouattara has said that all further cases related to the 2010-11 crisis will be tried in national courts.

Côte d’Ivoire’s reparations body was disbanded in April, having registered more than 316,000 victims. Having first awarded cash payments and medical care to 4,500 victims, the government began a second phase of largely non-monetary assistance in October.

Six journalists were detained on February 12 for 48 hours on charges of publishing false information after reporting on alleged bonuses paid to mutineers from the army’s special forces. Two other journalists were detained on July 31 for 24 hours on similar charges after alleging that bank accounts belonging to National Assembly leader Soro had been frozen. The trial of an online news editor, charged with divulging false news in May 2016 after publishing an interview with ex-President Gbagbo’s son, Michel, was adjourned October 20 after several earlier delays.

The government in May indefinitely delayed a parliamentary vote on a new press law, which was criticized by media freedom groups for stipulating harsh penalties for vaguely defined media offenses.

In a violation of the right to freedom of expression, Sam Mohammed, a businessman and opposition supporter, was sentenced to six months’ imprisonment on March 31 for slander and defamation, after he questioned President Ouattara’s Ivorian nationality at a public rally.

Although the Ivorian constitution protects freedom of assembly, Ivorian law requires opposition parties to request permits for public rallies. Three opposition politicians were given disproportionate 30-month sentences May 26 for their role in a banned opposition rally in May 2015.

Recurring disputes over land ownership remain an important source of intercommunal tension, particularly in western Côte d’Ivoire. In October and November, at least 10 people were killed during clashes between rival groups for control of territory in protected forests in western Côte d’Ivoire. Ivorian judges have yet to complete an investigation into violent intercommunal clashes between pastoralists and farmers in Bouna in March 2016, which left at least 27 people dead and thousands more displaced.

Implementation of a 1998 land law, which aims to reduce conflicts by converting customary land ownership to legal title, remains extremely slow, with less than four percent of rural land registered. The government in 2016 created a new rural land agency to streamline the land registration process, with the agency to become operational in 2018.

Côte d'Ivoire, which has lost vast swathes of forest to cocoa farming, announced in September a policy to devolve responsibility for reforestation to private businesses. Past, government-led reclamation efforts, such as the 2016 eviction of farmers from Mont Péko national park, led to widespread forced evictions.

Gradual efforts to strengthen the judicial system continued, demonstrated by the more frequent organization of cour d’assises sessions in Abidjan and two regional courts and the establishment of a legal aid fund. However, fundamental problems remain, including excessive use of pretrial detention and a lack of judicial independence, particularly in political trials. Dozens of former President Gbagbo supporters arrested for their alleged role in the post-election crisis or subsequent attacks against the state remain in extended pretrial detention.

Prisons are severely overcrowded and detainees lack adequate access to medical care and suffer extortion by prison guards and fellow inmates. Close to 130 detainees escaped in a series of prison breaks in August and September, although at least 42 were subsequently recaptured.

Côte d’Ivoire continues to struggle with violent crime by street gangs, including by children, which has led to public beatings and lynching of suspected criminals. Abidjan’s juvenile detention center is housed inside an adult prison, and children in pretrial detention are often detained with adults.

Côte d’Ivoire does not criminalize same-sex conduct, although the criminal code establishes higher minimum sentences for public indecency for same-sex couples. An antidiscrimination provision in Côte d’Ivoire’s new constitution, promulgated in January 2017, does not include protection against discrimination on grounds of sexual orientation. Incidents of discrimination against lesbian, gay, bisexual, and transgender (LGBT) persons, including physical assaults, are common.

Although the UN reported in January 2017 that the number of reported cases of sexual and gender-based violence has progressively decreased since 2014, social stigma and widespread impunity prevents many victims from reporting abuses. The holding of cour d’assises sessions has enabled some trials and convictions for rape, but many sexual assaults are reclassified as lesser offenses or settled out of court.

The mandate of the UN independent expert on human rights in Côte d’Ivoire expired June 30 and was not renewed by the Human Rights Council. In June, Cote d’Ivoire was elected to the UN Security Council for the 2018-2019 term.