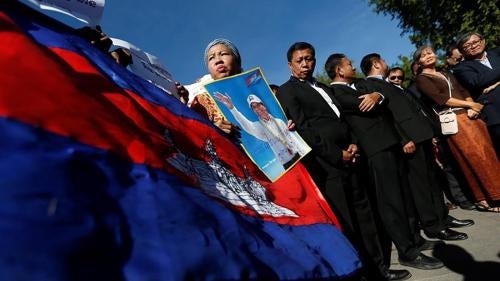 The civil and political rights environment in Cambodia markedly deteriorated in 2017 as the government arrested the leader of Cambodia’s political opposition on dubious charges of treason; dissolved the main opposition party and banned over 100 members from political activity; intensified the misuse of the justice system to prosecute political opposition and human rights activists; and forced several independent media outlets to close.

Authorities have detained at least 35 opposition and civil society leaders since July 2015, many of whom have been prosecuted and convicted in summary trials that failed to meet international standards. At least 19 remained in detention at time of writing.

The ruling Cambodia People’s Party (CPP), which controls the country’s security services and courts, has led the crackdown that began in 2016 and is likely motivated by Prime Minister Hun Sen’s anxiety about national elections scheduled for July 29, 2018. The arbitrary arrests and other abuses appear aimed at preventing a victory by the opposition Cambodia National Rescue Party (CNRP), which made electoral gains during the 2013 national elections and the 2017 commune elections. Because of the dissolution of the CNRP in November, there will be no major opposition party to contest the CPP in the 2018 elections.

Throughout 2017 the government continued to deny Cambodians the right to free speech and peaceful assembly by suppressing protests and issuing a series of bans on gatherings and processions. Cambodia’s anti-corruption authorities, rather than conducting investigations into suspicious government concessions and the questionable wealth of senior CPP leaders and their families, instead carried out politically motivated investigations of the CNRP and other organizations critical of the government.

CNRP leader Sam Rainsy remained in exile in 2017 to avoid a two-year prison sentence stemming from a politically motivated criminal defamation charge from 2008.

On September 3, the government arrested CNRP’s leader Kem Sokha on charges of treason. Kem Sokha, who had assumed leadership of the party after Sam Rainsy’s exile and resignation, had already faced de facto house arrest in 2016 in a separate politically motivated case.

Although voting day was peaceful, the overarching dynamic of the elections were unfair, with unequal media access for opposition parties, bias toward the CPP in electoral institutions, and lack of independent and impartial dispute resolution mechanisms.

The government used increasingly threatening political rhetoric throughout the year, including repeated threats of violence, to intimidate dissidents and civil society groups, especially in the lead-up to the commune elections. Prime Minister Hun Sen and other leaders repeated claims that any election victory by the opposition would lead to “civil war,” and threatened to use violence against those who “protest” or seek a “color revolution,” a term authorities use to portray peaceful dissent as an attempted overthrow of the state.

In May 2017, Hun Sen stated he would be “willing to eliminate 100 to 200 people” to protect “national security,” and suggested opposition members “prepare their coffins.” On August 2, Minister of Social Affairs Vong Sauth said that protesters who dispute the 2018 election results will be “hit with the bottom end of bamboo poles”—a reference to a torture technique used during the Khmer Rouge regime. After Kem Sokha’s arrest, CPP officials insisted he had conspired with the United States to overthrow the government, citing US capacity-building support for political parties—support that was also given to the CPP.

The national assembly passed two rounds of repressive amendments to Cambodia’s Law on Political Parties. The amendments empower authorities to dissolve political parties and ban party leaders from political activity without holding hearings or an appeal process. The amendments also contain numerous restrictions that appear to have been tailored to use against the CNRP, most notably provisions that compel political parties to distance themselves from members who have been convicted of a criminal charge.

In October, Hun Sen used these provisions in a case brought in the Supreme Court to dissolve the CNRP. On November 16, the Supreme Court, chaired by a judge who is also a central committee member of the ruling CPP, dissolved the CNRP and banned 118 CNRP members of parliament and party officials from political activity for five years.

Cambodia’s General Department of Taxation, on the pretext of an unpaid tax bill, forced the independent Cambodia Daily newspaper to close on September 4, and brought tax-related criminal charges against its owners. At time of writing, two of its reporters were also being investigated for baseless charges of “incitement.”

The government also cracked down heavily on independent radio in September, revoking the license of Mohanokor Radio and its affiliates, which broadcast Voice of America (VOA) and Radio Free Asia (RFA), and closing the independent radio station Voice of Democracy (VOD).

Authorities also forced the closure of RFA’s bureau, and in November, a court charged two journalists with espionage for filing news reports for RFA. Other radio stations broadcasting VOA or RFA have come under pressure from the government and stopped broadcasting in August. Almost all domestic broadcast media is now under government control.

For most of 2017, the government detained four senior staff members of the Cambodian Human Rights and Development Association (ADHOC) and a former ADHOC staff member serving as deputy secretary-general of the National Election Committee (NEC). The group, commonly referred to as the “ADHOC Five,” were arrested in 2016 on politically motived charges and held in pretrial detention for 427 days until their release in June. Each faces 5 to 10 years in prison if convicted.

Authorities continued to detain the land rights activist and women’s rights defender Tep Vanny, who was arrested on August 15, 2016, during a “Black Monday” protest calling for the release of the ADHOC Five. After her arrest, authorities reactivated an old case against her stemming from a 2013 protest, and in February sentenced her to 30 months in prison. Authorities also continued to prosecute several other spurious legal cases against her.

In July, authorities announced an investigation into two groups that were monitoring the commune election. The government alleged that the groups violated the vague and undefined concept of “political neutrality” in Cambodia’s Law on Associations and Non-Government Organizations (LANGO), which allows for the dissolution or denial of registration of NGOs, and had failed to register under LANGO.

On August 23, the Ministry of Foreign Affairs ordered the closure of the US-funded NGO National Democratic Institute (NDI), and expulsion of its non-Cambodian staff, citing LANGO and the 1997 Tax Law.

Throughout the year, authorities harassed Mother Nature, an environmental group, arrested members on spurious charges of incitement and making unauthorized recordings, and forced the group to deregister as an NGO in September. In October, the government suspended the registration for another NGO critical of the government, Equitable Cambodia, along with the Federation of Cambodian Intellectuals and Students.

A suspect was convicted in March in the July 10, 2016 murder of prominent political commentator Kem Ley, in proceedings that were highly flawed and did little to dispel concerns of government involvement in the killing. Kem Ley was killed five days after a Cambodian general publicly called on Cambodian armed forces to “eliminate and dispose of” anyone “fomenting social turmoil.” Kem Ley had been a frequent critic of Hun Sen and, in the months before his killing, had given several media interviews in which he referenced the vast wealth of Hun Sen’s family.

The convicted suspect, Oeuth Ang, was tried and sentenced to life imprisonment after proceedings that ignored improbabilities and inconsistencies in his confession and shortcomings in the investigation.

In June, Hun Sen brought a civil charge of defamation against another political commentator, Kim Sok, for suggesting that CPP authorities were behind the killing and authorities filed a criminal charge of incitement against him. In August, Kim Sok was sentenced to a year-and-a-half in prison and ordered to pay Hun Sen US$200,000. Opposition Senator Thak Lany was also convicted in absentia for similar offenses after commenting on the Kem Ley case.

Authorities carried out questionable legal investigations into trade unions under Cambodia’s Trade Union Law, which has prevented some unions from legally registering and excluded them from collective bargaining and formally advocating for rights and improved working conditions.

China, Vietnam, and South Korea were key investors in 2017. China, Japan, and the European Union were Cambodia’s leading providers of development-related assistance. The United States, once a key donor, is now regularly criticized by the Cambodian government as a hostile foreign power.

The United Nations Human Rights Council passed a resolution in September renewing the mandate of the UN special rapporteur on the situation of human rights in Cambodia for two years and requesting that the UN secretary-general report to the Human Rights Council in March 2018, ahead of Cambodia’s national elections.