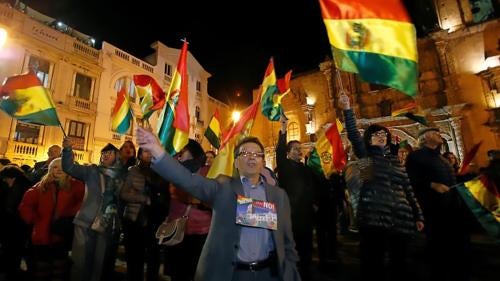 Impunity for violent crime and human rights violations remains a serious problem in Bolivia. The administration of President Evo Morales has created a hostile environment for human rights defenders that undermines their ability to work independently.

Despite recent legal reforms, extensive use of pretrial detention—combined with trial delays—undermine defendants’ rights and contribute to prison overcrowding. Threats to judicial independence, violence against women, and child labor are other major concerns.

In September 2017, supporters of President Morales in the Plurinational Assembly —the national legislature—brought a lawsuit to the Constitutional Court seeking to abrogate the constitution’s one-time re-election limit, which would allow him to run for a fourth term. Partly due to a 2013 Constitutional Court ruling, President Morales has been able to run in three consecutive presidential elections, all of which he won. In February 2016, voters had rejected a national referendum that would have changed the constitution to allow him to run a fourth time.

Bolivia has prosecuted only a few of the officials responsible for human rights violations committed under authoritarian governments from 1964-1982, partly because the armed forces have at times refused to give information to judicial authorities about the fate of people killed or forcibly disappeared.

In August, the government established a truth commission to carry out non-judicial investigations of grave human rights abuses committed between 1964-1982, and the commander-in-chief of Bolivian armed forces, Gen. Luis Orlando Ariñez, said that the military would fully cooperate. The commission can provide information for judges to convict those responsible.

Impunity has led to mob attacks, or lynchings, of alleged criminals. In May, a mob in the eastern city of San Julián entered a courtroom where a judge was questioning an alleged killer of a local woman, dragged the suspect outside, killed him, and hanged him in a tree. Many such lynchings go unpunished.

The government has sought to reform the Bolivian justice system, which has been plagued by corruption, delays, and political interference for years. While reforms are certainly called for, current efforts pose a serious risk to judicial independence in the country.

In June 2016, members of the three branches of government, as well as civil society groups and other stakeholders, discussed proposals during a “National Justice Summit.” The summit’s recommendations included reforming the selection process for high court judges, creating a new body to supervise judges, and assessing the work of current judges and prosecutors.

In January 2017, Congress created a commission to oversee implementing the recommendations. The commission has broad powers, including “controlling” the appointment of new judges and carrying out “all other actions necessary” to implement the recommendations. Five of the commission’s nine members are either supporters of Morales in the Plurinational Assembly or government officials directly appointed by him.

In December 2016, government supporters in the Plurinational Assembly suspended four of the five members of the Magistrate’s Council—the body in charge of appointing and removing judges—arguing that they had illegally named a judge to replace another judge who had been appointed but not sworn in. Faced with possible removal from office, three of them resigned in April.

At time of writing, voters were scheduled to elect high court judges in December 2017. Voters will choose judges from lists created by the Plurinational Assembly, where the Morales administration has a two-thirds majority.

In September, President Morales said in an interview that judicial independence was a “US doctrine” in the “service of the empire.”

Around 68 percent of inmates in Bolivian prisons have not been convicted of a crime. Extended pretrial detention and trial delays overcrowd prisons and lead to poor conditions. As of December 2016, more than 15,000 inmates were packed into prisons built to hold a maximum of around 5,000.

Presidential decrees adopted between 2012 and 2017 allow the president to reduce the sentences of those convicted of minor crimes and pardon those held in pretrial detention for minor crimes. As of December 2016, more than 5,800 people had benefited from such pardons, according to official figures.

At time of writing, the Plurinational Assembly was discussing a government-sponsored criminal reform which would shorten the maximum periods of pretrial detention and limit the cases in which judges can apply it.

The Attorney General’s Office has repeatedly used a 2010 anti-corruption law to prosecute alleged crimes committed before the law was enacted. International human rights law, however, prohibits such retroactive application of changes to criminal law, unless doing so is beneficial to the defendant.

In October 2016, the Attorney General’s Office used the law to charge businessman and opposition leader Samuel Doria Medina with “anti-economic conduct” for allegedly transferring US$21 million from the government to a private foundation, when he was minister of planning in 1992. In January 2017, the Supreme Court rejected a request by the Attorney General’s Office that Doria be held in pretrial detention, but ordered that he appear before prosecutors every month and forbade him from leaving the country.

At time of writing, Jorge “Tuto” Quiroga, former president of Bolivia and current opposition leader, was also being prosecuted for “anti-economic conduct.” Prosecutors argued that officials in his administration negatively impacted the “interests of the state” by signing four oil agreements with foreign companies.

Human rights defenders continue to face harassment, including from government officials, which undermines their ability to work independently.

A law and decree that President Morales signed in 2013 grant the government broad powers to dissolve civil society organizations. Under the decree, any government office may request that the Ministry of Autonomy revoke the permit of a nongovernmental organization (NGO) if it performs activities other than those listed in its bylaws, or if the organization’s legal representative is criminally punished for carrying out activities that “undermine security or public order.”

The decree also allows the Plurinational Assembly to request the revocation of an NGO’s permit in cases of “necessity or public interest.” These measures give the government inappropriately wide latitude to interfere with the operation of independent civil society groups.

Bolivian officials have repeatedly accused rights groups of engaging in an international conspiracy against the government, but have failed to present evidence to support such claims. In August 2017, for example, President Morales accused “some NGOs and foundations” of being “instruments of the empire to loot and intervene [in] countries”—a reference to the United States.

While public debate is robust, the Morales administration periodically lashes out against journalists, accusing them, without presenting evidence, of publishing what it calls lies and politically motivated distortions. The government has repeatedly accused media of participating in an international conspiracy against Bolivia and the president.

Bolivia lacks transparent criteria for using government funds to purchase media advertisements—an important source of media revenue—and some media outlets have accused the government of discriminating against those who criticize government officials by withholding advertising from them. In May 2017, President Morales said that media outlets that did not receive government advertisements were those that “lie, insult, slander, and discredit authorities.”

Indigenous peoples’ right to free, prior, and informed consent (FPIC) regarding legislative or administrative measures that may affect them is not fully embodied in Bolivian legislation. A current mining law limits FPIC to the exploitation phase of land concessions, but international standards call for FPIC through all stages of projects that impact on indigenous peoples’ rights over land and natural resources.

In May 2017, President Morales signed a bill that authorizes the building of a highway in the Isiboro Secure National Park and Indigenous Territory (known as “TIPNIS”). The law is based on a 2012 consultation with local indigenous groups, which some rights groups say was not fully free nor fair.

Women and girls in Bolivia remain at high risk of gender-based violence, despite a 2013 law that sets forth comprehensive measures to prevent and prosecute violence against women. The law created the crime of “femicide” (the killing of a woman in certain circumstances, including of domestic violence) and called for the establishment of shelters for women, as well as special prosecutors and courts for gender-based crimes.

The Attorney General’s Office reported 74 “femicides” in Bolivia from January-September 2016.

Under Bolivian law, abortion is not a crime when the pregnancy is due to rape or if the procedure is necessary to protect the life or health of a pregnant women. At time of writing, the Plurinational Assembly was discussing a government-sponsored criminal reform that would significantly ease abortion restrictions. Under the bill, abortion would be fully decriminalized for girls. Women would be allowed to end pregnancies in a range of circumstances, including if their lives or health are at risk, if the pregnancy is due to rape, and if the fetus suffers severe conditions not compatible with life outside the womb.

In 2014, the Plurinational Assembly adopted legislation allowing children as young as 10 to work in activities that are not deemed “dangerous” or “unhealthy.” The law contravenes international standards and makes Bolivia the first country in the world to legalize employment at such a young age. Under the law, the government had to carry out a census by July 2016 to identify the number of Bolivian children under 14 who are working. At time of writing, the census had yet to take place. The latest national census on child labor, from 2008, indicated that some 850,000 children under 17 were working in Bolivia.

In May 2016, the Plurinational Assembly passed a bill that allows people to revise the gender noted on their identification documents without prior judicial approval.

Same-sex couples are not allowed to marry or engage in civil unions. Bolivia’s 2009 constitution defines marriage as the union of a man and a woman.

In May, the Office of the US Trade Representative announced that it would initiate a review of whether Bolivia’s child labor legislation disqualifies the country from a trade preference program that eliminates duties on certain products imported to the US.

The Office of the UN High Commissioner for Human Rights (OHCHR) in Bolivia was expected to close at the end of 2017, following the government’s decision not to renew the 2007 agreement with it to establish an office in the country.

As a member of the UN Human Rights Council, Bolivia has regularly voted to prevent scrutiny of human rights violations, opposing resolutions spotlighting abuses in Syria, Burundi, and Iran.