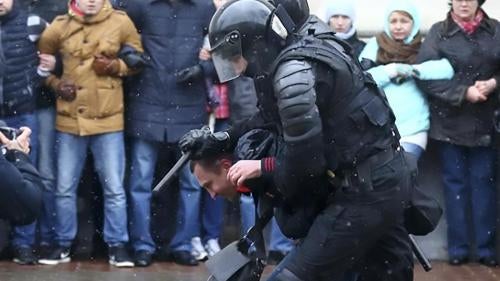 The government continued its crackdown on civil society in 2017. Authorities carried out the broadest wave of arrests of peaceful protesters since 2010. For the first time in 10 years, authorities registered a political opposition movement, but restrictive legislation continues to prevent rights groups from registering and operating freely. No new political party has been able to register since 2000.

Belarus remains the only European country to use the death penalty and in 2017 authorities made no efforts towards its abolition.

European governments and institutions continued to strengthen relations with Belarus despite a lack of tangible rights improvements.

In July, a vaguely worded law on “protecting children from information harmful for their health and development” entered into force. These provisions may be used to restrict dissemination of neutral or positive information about lesbian, gay, bisexual, and transgender (LGBT) people as “discrediting the institution of the family.”

February and March were marked by mass demonstrations in 13 Belarusian cities, protesting a new tax on the unemployed. Peaceful protests also took place on March 25, Freedom Day, the anniversary of the creation of the Belarusian People’s Republic in 1918, and continued the following day.

Police arbitrarily detained at least 700 people in connection with the protests, including about 100 journalists and 60 human rights activists. Police punched, kicked, and clubbed many of the detainees. At least 177 people were charged with fabricated offenses, such as hooliganism or participating in unsanctioned protests, and sentenced to fines or up to 25 days’ detention, following pro forma administrative court hearings. Many did not have access to lawyers and could not call defense witnesses.

Also in March, authorities arrested 35 people on criminal charges of “organizing mass riots” for the Freedom Day protests. Authorities obstructed their access to legal counsel. In April, authorities also charged 20 of those detained with “organizing an unlawful armed group.” In June, authorities closed the rioting case due to lack of evidence, and released those who had been charged only with rioting. Also in June, authorities released all suspects in the case of “organizing an illegal armed group” on their own recognizance, but they continued to face charges. Some of the suspects are former members of White Legion, a disbanded nationalist organization.

In April, a Minsk court canceled the suspension of an earlier prison sentence against activist Dzmitry Paliyenka and ordered him to serve 18 months. The court said he had violated the terms of his suspended sentence by committing several administrative violations. In 2016, police detained Paliyenka for taking part in the apolitical Critical Mass cycling protest. After a flawed trial, a court handed him a suspended two-year prison sentence on trumped-up charges of spreading pornography and violence against a police officer.

Hours before the March 25 protest, police in Minsk raided the Human Rights Center “Viasna,” detaining 58 people. A Viasna lawyer had to be hospitalized for a concussion he sustained due to police mistreatment. Authorities refused to open an investigation.

Also in March, authorities arrested five activists from Viasna and the Belarusian Helsinki Committee while they monitored peaceful protests, and charged them with participating in an unauthorized gathering. All were sentenced to up to 15 days of detention.

In April, a Minsk court fined Viasna member Tatsiana Reviaka for disorderly conduct and disobeying police during the March 26 rally.

Also in April, a court in Vitebsk sentenced Pavel Levinau to 15 days’ detention for participation in an unauthorized rally that he was monitoring. Levinau had notified local authorities in advance of his intention to monitor the gathering as a member of the Belarusian Helsinki Committee.

Laws and regulations governing public association remain restrictive, preventing human rights groups or political opposition movements from registering and operating freely. Involvement in a non-registered organization is a criminal offense. Most registration rejections are based on arbitrary bureaucratic pretenses.

In a positive development, in May, authorities registered Tell the Truth, an opposition movement that had repeatedly tried to register since 2010, making it the first political opposition group able to register in 10 years.

In August, the authorities charged staff of two independent trade unions, the Radio and Electronic Industry Workers' Union (REPAM) and the Belarusian Independent Trade Union of Miners (BITU), on suspicion of large-scale tax evasion. Henadz Fiadynich, leader of REPAM, was released on his own recognizance. Ihar Komlik, the union’s accountant, remained in custody at time of writing. Local and international human rights groups said the charges were part of authorities’ harassment against the unions and their leaders in retaliation for their criticism of the presidential decree imposing a tax on the unemployed, and taking part in the March demonstrations.

Between March and August, authorities detained at least 100 journalists, mostly while they were reporting on street protests, and sentenced at least 10 to up to 15 days’ detention on trumped-up charges. Police beat six of them.

Authorities also prosecuted 20 journalists, for a total of 35 cases, for cooperating with unregistered foreign media, an increase since last year. All resulted in significant, sometimes repeated, fines.

“They Threatened to Take My Son from Me”
Larysa Shchyrakova, an outspoken freelance journalist from Homel, works with Belsat, a Poland-based television station...

Larysa Shchyrakova, an outspoken freelance journalist from Homel, works with Belsat, a Poland-based television station known for its critical reporting of Belarus. On March 26, Belarus law enforcement brought no less than six charges against Shchyrakova in one day, for covering a peaceful anti-government protest a day earlier. They also threatened, twice, to take away her 10-year-old son.

Police arrested Shchyrakova on March 25, while she was reporting on the Homel protest from the city square, livestreaming it on her Facebook page. Police accused her of co-operating with unregistered foreign media, failing to show up to a police station for questioning, failing to register her pet dog, and, for good measure, having a pile of sand outside her house on the outskirts of Homel.

When Shchyrakova spoke to Human Rights Watch in Belarus in March her complete lack of fear was striking. She joked that she was used to being fined. She said that she did not show up for questioning at the police station because she knew for certain that the police were going to detain her under some arbitrary pretext, to prevent her from reporting on the upcoming rally. She didn’t seem to regret any of it. Her voice faltered only when she spoke about the threats she received from the police and the local office of juvenile affairs after she was arrested. “They threatened to take my son from me,” she said. Journalists in Belarus are under constant government pressure. But there is something particularly menacing about threatening a journalist with taking away their 10-year-old child to silence them.

On March 31, police searched the Minsk offices of Poland-based Belsat television, and seized the channel’s equipment. The channel was able to continue operating, but the equipment was not returned. By October 2017, the total amount of fines imposed on Belsat journalists had exceeded US$11,000, according to the Belarusian Association of Journalists.

In December 2016, authorities arrested three bloggers with the Russian-language websites Regnum, Lenta.ru and EADaily, on charges of inciting extremism and sowing social discord between Russia and Belarus. All are in custody, pending investigation.

In July, authorities charged Ihar Pastnou, a psychiatrist in Vitebsk known for criticizing local officials, with making a knowingly false accusation of a crime, after he wrote on his social media page about beatings in one of the Vitebsk pretrial detention centers. Pastnou was at liberty pending investigation at time of writing.

Belarus failed to provide meaningful protection to hundreds of asylum seekers, mostly from the Russian republic of Chechnya, who arrived in Belarus with the aim of crossing the border into Poland and requesting asylum. Belarus lacks a functioning asylum system. During 2017 it returned at least two asylum seekers from Chechnya back to Russia, which authorities view as a safe country of origin, putting them at grave risk of ill-treatment.

In July, the Organization for Security and Co-operation in Europe (OSCE) Parliamentary Assembly held its 26th Annual Session in Minsk.

The government continued to refuse to cooperate with United Nations Special Rapporteur on Belarus Miklos Haraszti, appointed in 2012. Haraszti visited Minsk in July at the invitation of the OSCE. In June, Haraszti issued a report on the human rights situation in Belarus, pointing out the “cyclical” nature of the repression of human rights and underscoring the vital importance of international scrutiny on Belarus. In June, the UN Human Rights Council extended Haraszti’s mandate for another year.

In October 2016, the European Olympic Committees selected Minsk to host the second European Games, to be held in June 2019. The decision sparked concern about Belarus’ long record of rights abuses, especially on media freedoms, in connection with major sporting events.

A rapporteur of the Parliamentary Assembly of the Council of Europe (PACE) visited Belarus in March. In its April resolution, the PACE condemned the March escalation of violence, and urged Belarus to respect freedoms of assembly, association, and expression.

In June, Belarus submitted a report to the UN Human Rights Committee for the first time since 1996.

In November 2016, in its concluding observations to Belarus’ eighth periodic report to the UN Committee on Elimination of Discrimination against Women, the committee noted the need to adopt anti-discrimination legislation, and to review registration requirements for nongovernmental organizations working on human rights issues.

In November 2016, Belarus ratified the UN Convention on the Rights of Persons with Disabilities.