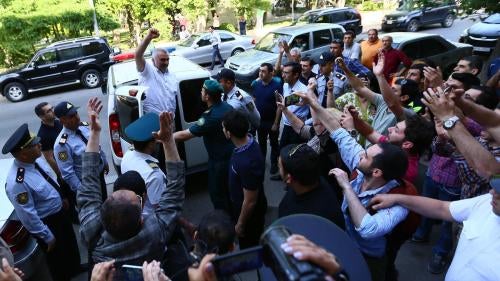 The government intensified its crackdown against critics in 2017. Courts sentenced at least 25 journalists and political and youth activists to long prison terms in politically motivated, unfair trials. Dozens more were detained or are under criminal investigation, face harassment and travel bans, or have fled. Draconian laws and regulations impede independent groups’ work and ability to secure funding. Torture and ill-treatment in custody persist. In a violent campaign, police arrested and ill-treated dozens of gay men and transgender women.

Authorities continued to use various criminal and administrative charges to stifle critics.

Also in January, a Baku court convicted youth activist Elgiz Gahraman, 31, to five-and-a-half years in prison on bogus drug-related charges. After his August 2016 arrest, police did not inform Gahraman’s relatives of his whereabouts and denied him access to his lawyer for days. During the trial, Gahraman alleged police beat and threatened him with sexual assault to force him to confess to drug possession. Authorities failed to effectively investigate the allegations.

Three members of the opposition Azerbaijan Popular Front Party (APFP) were convicted during the year and at least nine were in prison on politically motivated charges. In July, a court convicted Faig Amirli, an APFP member and financial director of the now-closed pro-opposition Azadlig newspaper, on bogus charges of inciting religious hatred and tax-evasion. He received a suspended sentence. Fuad Ahmadli, a senior APFP member and social media activist, was sentenced in June to four years in prison on spurious charges of misusing personal data. In January 2017, a Baku court convicted senior APFP member Fuad Gahramanli to 10 years’ imprisonment for inciting religious and ethnic hatred; he posted criticisms of the government on Facebook.

In May, authorities arrested APFP Deputy Chair Gozel Bayramli at the border with Georgia and charged her with smuggling. She remained in pretrial custody at time of writing.

Dozens of journalists and activists convicted in politically motivated trials remained in prison. Among them was Ilgar Mammadov, leader of the pro-democracy opposition movement Republican Alternative (REAL), imprisoned since February 2013. He remained in prison despite a 2014 European Court of Human Rights (ECtHR) judgment finding his imprisonment to be illegal, and repeated demands by the Council of Europe to release him. In November, in a separate case, the ECtHR found that Mammadov’s right to a fair trial had been violated. Others behind bars include journalists Seymur Hazi and Nijat Aliyev; youth activists Ilkin Rustemzadeh, Bayram Mammadov, and Murad Adilov; and opposition politicians Mammad Ibrahim and Asif Yusifli.

None of the convictions of activists and journalists released in the last two years were quashed and some face travel restrictions, including award-winning investigative journalist Khadija Ismayilova and human rights lawyer Intigam Aliyev.

Authorities harassed relatives of activists living in exile. In February, police detained 12 relatives, including the two-year-old niece of Ordukhan Teymurkhan, a video blogger and social media activist living in the Netherlands. Teymurkhan recorded and published a call from a Baku police officer who blamed him for his relatives’ detention. The next day the authorities released all of them except for Teymurkhan’s older brother and adult nephew, who were sentenced to 30 days’ detention for allegedly disobeying police orders.

In June, Vidadi Isganderli, a government critic living in Georgia, reported that five of his relatives were pressured to quit their jobs, apparently in retaliation for his activism.

In October, parliament adopted amendments banning lawyers without Bar membership from representing clients, likely to further limit the number of lawyers willing to take on politically sensitive cases. Observers have criticized the Azerbaijani Bar for lack of independence and its arbitrary powers to deny admissions of new members.

Authorities continued to use bogus tax-related and other criminal charges to jail critical journalists and bloggers. At least 10 remained in prison. In March, a court sentenced Mehman Huseynov, a prominent journalist and blogger, to two years in prison for allegedly defaming the staff of a police station. Huseynov had publicized how several police officers arbitrarily detained and beat him in January.

A court sentenced Afgan Sadigov, the founder and editor-in-chief of AzelTV news website operating in a southern Azerbaijani region, to two-and-a-half years in prison in January on spurious hooliganism charges. Sadigov often reported on allegations of embezzlement of social benefits by local authorities.

MEHMAN HUSEYNOV’S STORY
Mehman Huseynov, 25, is one of Azerbaijan’s best-known journalists and bloggers...

Mehman Huseynov, 25, is one of Azerbaijan’s best-known journalists and bloggers, with his hard-hitting exposés of police brutality and alleged government corruption, gaining him hundreds of thousands of social media followers. But as he and many other journalists have learned, critical journalism does not go unpunished in Azerbaijan.

Security officials repeatedly harassed and intimidated Huseynov for years. Authorities confiscated his identity card in 2014, falsely claiming it was fake. Without it, he couldn’t retain a lawyer, get medical care, or open a bank account. Officials placed him under a travel ban.

The government’s efforts to silence Huseynov peaked in January 2017, when several plain-clothes police officers grabbed him in the center of Baku, forced a bag over his head, used an electric shock weapon on his groin, and beat him. Authorities then charged him with resisting police. Huseynov publicly demanded justice for the abuse. Instead of investigating the allegations, the authorities claimed that by going public, Huseynov defamed the entire staff of the police station. A court sentenced him to two years’ imprisonment for defamation in March.

Ever articulate as he was defiant, at an April appeal hearing, Huseynov spoke to the fate of nearly all of Azerbaijan’s independent journalists, saying: “I have been engaged in journalism for eight years. When starting this work, I was aware of the troubles and pressures associated with it, and that it was going to cost me dearly because freedom of speech has a very high price in Azerbaijan.”

In May, unidentified people abducted journalist and political activist Afgan Mukhtarli, in Georgia’s capital, Tbilisi, and illegally brought him to Azerbaijan. Azerbaijani authorities then charged Mukhtarli with unlawful border crossing, smuggling, and resisting a representative of authority. Mukhtarli had lived in exile since 2015 out of fears for his security. He remained in custody in Baku at time of writing.

Also in May, police arrested Aziz Orujov, director of the Kanal13 online television channel, and sentenced him to 30 days’ detention for allegedly resisting police. During his detention, authorities brought criminal tax-related charges against him. At time of writing Orujov remained in pretrial custody.

Azerbaijan maintains highly restrictive and punitive regulations on nongovernmental organizations (NGOs), making it almost impossible for independent groups to fund and carry out their work. In January, under pressure from EITI, the Cabinet of Ministers adopted changes to certain regulations on international donor funding and grant agreement registration. The revisions did not eliminate the authorities’ discretion to arbitrarily deny grant registration or the entrenched legal barriers to NGOs’ operations.

Authorities continued to freeze the bank accounts of at least a dozen NGOs working on human rights and government accountability; the groups suspended their work or operated in exile. Some local groups involved in EITI gained access to their previously blocked accounts. Several NGO leaders continued to face travel bans, harassment, and interrogations.

Torture and other ill-treatment continued with impunity. At the January trial of those arrested in November 2015 in Nardaran, 17 men made credible allegations of ill-treatment in detention to coerce confessions and testimony against others. The men alleged that officers at the Interior Ministry Organized Crime Unit headquarters placed sacks on their heads, handcuffed them, and beat them with truncheons, including on their genitals and the soles of their feet. Some also said that officials used electric shocks on them and threatened to rape their wives or sisters. The men also alleged that police beat and kicked them in a police van upon detention. Authorities failed to effectively investigate the allegations.

In early January, several plainclothes officers attacked journalist Mehman Huseynov in downtown Baku. They bound his eyes and mouth, forced a bag over his head, used an electroshock weapon on his groin, and punched him before detaining him. The next day, a court found Huseynov guilty of disobeying police orders and fined him. After Huseynov publicized the abuse, a court convicted him to two years’ imprisonment for defamation.

In an open letter posted on social media by his lawyer, activist Giyas Ibrahimov, serving a 10-year prison sentence since May 2016 for political graffiti, alleged guards chained his hands behind his back, beat and swore at him, and arbitrarily placed him in solitary confinement for 15 days in June. Authorities failed to conduct an effective investigation.

In September, authorities detained dozens of people presumed to be gay or bisexual, as well as transgender women, on dubious disobedience charges. Police ill-treated many to coerce bribes and information about other gay men. Following unfair trials, they were either sentenced for up to 30 days’ detention or released after they paid a fine. Authorities failed to investigate the allegations of torture and ill-treatment made by many of them during the appeal hearings.

The United States, European Union, and Azerbaijan’s other bilateral and international partners continued to criticize the government’s targeting of critics, but failed to effectively leverage their relationships with the government to secure meaningful rights improvements.

President Ilham Aliyev visited Brussels in February to inaugurate talks on a new EU-Azerbaijan partnership agreement to enhance political and economic ties. The EU failed to condition negotiations on the release of unjustly imprisoned journalists and activists, and an end to restrictions on NGOs.

A June European Parliament resolution condemned the abduction of Afgan Mukhtarli and urged Azerbaijan’s authorities to release him and others detained on politically motivated charges.

In March, the EITI suspended Azerbaijan’s membership for failing to comply with the group’s civil society requirements. The government responded by withdrawing. While international financial institutions, like the World Bank, pledged support for EITI, they continued to fund extractives projects despite the government’s failure to implement reforms required by EITI.

In June, the US expressed concern about the abduction and arrest of Afgan Mukhtarli as well as the arrest of APFP Deputy Chair Gozal Bayramli, and called on the government to release “all those incarcerated for exercising their fundamental freedoms.”

In October, the Council of Europe’s Committee of Ministers took the unprecedented decision to trigger infringement proceedings against Azerbaijan for failure to implement the European Court judgement on Ilgar Mammadov.

Also in October, the Parliamentary Assembly of the Council of Europe adopted two strongly worded resolutions, urging Azerbaijan to cease its unrelenting crackdown against critics.

In June, the Open Government Partnership, a voluntary initiative promoting government transparency and accountability, extended Azerbaijan’s inactive status due to “unresolved constraints on the operating environment for NGOs.”