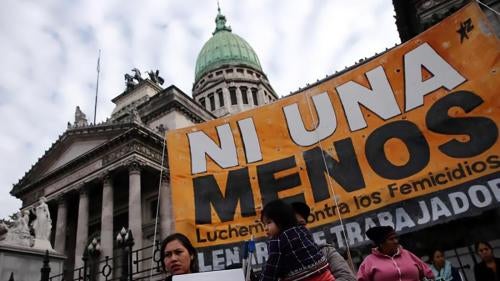 Impunity for the 1994 bombing of the AMIA Jewish center in Buenos Aires, vaguely defined criminal provisions that undermine free speech, and delays in appointing permanent judges are serious concerns.

In 2017, Argentina created a federal agency to ensure access to official information. Argentina continues to make significant progress protecting lesbian, gay, bisexual, and transgender (LGBT) rights and prosecuting officials for abuses committed during the country’s last military dictatorship (1976-1983), although trials have been delayed.

As of November 2017, the Attorney General’s Office reported 2,971 people charged, 818 convicted, and 99 acquitted of crimes allegedly committed by Argentina’s last military junta. Of 613 cases alleging crimes against humanity, judges had issued rulings in 193.

Prosecutions were made possible by a series of actions taken in the early 2000s by Congress, the Supreme Court, and federal judges annulling amnesty laws and striking down pardons of former officials implicated in the crimes. As of September 2017, 125 people who were illegally taken from their parents as children during the 1976-1983 dictatorship had been located. Many were reunited with their families.

In May, the Supreme Court issued a controversial ruling on sentencing for crimes against humanity committed during the last dictatorship. It ruled that Luis Muiña, convicted of torture and kidnappings committed in 1977, could benefit from a 1994 law—known as the “2x1” Law, which aims to reduce the overuse of pretrial detention and incentivize speedy trials for people in detention. The court used provisions of the law to reduce his sentence from 13 to 9 years.

In July, a criminal court in Mendoza province sentenced four people who served as judges during the dictatorship to life in prison without possibility of parole for committing crimes against humanity, including arbitrary arrests, torture, killings, and enforced disappearances. Twenty-four military, police, and penitentiary agents were also convicted.

The large number of victims, suspects, and cases make it difficult for prosecutors and judges to bring those responsible to justice while respecting their due process rights. The Attorney General’s Office reported in October that 533 pretrial detainees and convicted prisoners were under house arrest, a right that Argentine law provides to people older than 70. In 2016, the government said it would not appeal judicial rulings granting house arrest to these detainees and convicted prisoners.

The fate of Jorge Julio López, a torture victim who disappeared in 2006—a day before he was due to attend the trial of one of his torturers—remained unknown.

In January 2016, police detained Milagro Sala, a prominent social leader in Jujuy province, in connection with her participation in street protests. Sala and others had gathered in the provincial capital to protest a decree the governor had issued purporting to regulate organizations like Sala’s, which implement government-funded housing and other welfare programs.

Sala was charged with instigating protesters to commit crimes and with sedition. Sala was also under investigation for alleged corruption. In July, she was transferred to house arrest, as mandated by precautionary measures that the Inter-American Commission of Human Rights (IACHR) had issued in her favor, but was returned to prison in October for allegedly failing to comply with the conditions of her home arrest.

In April 2017, the Argentine government committed to reforming the criminal code to modify and narrow the definition of sedition. However, it had yet to present a formal proposal to Congress at time of writing.

Upon taking office, President Mauricio Macri adopted a temporary set of decrees to regulate media, and created a new agency that reports to the Communications Ministry to implement the new rules. In July 2016, the government said it was drafting a communications law that it claimed would respect free speech. At time of writing, the law had not been presented to Congress. However, the new, supposedly temporary agency that lacks structural independence from the executive had already issued rulings regulating media.

In 2016, the Macri administration issued a resolution establishing transparent criteria to prevent favoritism in government purchases of media advertising. In August 2017, the president appointed the head of a national agency to ensure public access to information held by government bodies, implementing a 2016 law approved by Congress. However, some provinces and municipalities still lack such laws, undermining transparency.

Overcrowding, ill-treatment by guards, inadequate facilities, and inmate violence continue in Argentina’s prisons. The National Penitentiary Office, which Congress created in 2003 to supervise federal prisons and protect detainees’ rights, reported the violent deaths of eight federal prisoners between January and June 2017, although the statistics did not make clear the perpetrators. The office also documented 300 alleged cases of torture or ill-treatment in federal prisons between January and May 2017, after 608 cases in 2016.

Police abuse remains a serious problem. Security forces occasionally employ excessive force against protesters, despite a 2011 commitment by authorities in at least 19 of Argentina’s 23 provinces to ensure that force is used proportionately.

The Provincial Commission for Memory, an autonomous public body created by the provincial legislature, reported that in 2016, one person a day either died in detention—mostly due to preventable causes, in facilities that are often plagued by poor medical treatment—or after being shot during clashes with police forces in Buenos Aires province.

On August 1, Santiago Maldonado, a 28-year-old artisan, went missing while visiting a Mapuche indigenous community in Cushamen, in the southern province of Chubut. On August 14, according to media reports, two members of the Mapuche community declared before the judge investigating the case that they saw the Gendarmerie—a federal security force—take Maldonado away from a demonstration. In October, his body was found near a river in the area. The judge investigating the case said that initial results of Maldonado’s autopsy revealed he apparently did not have injuries caused by third parties, and some forensic experts reportedly claimed that his body had spent up to 60 days under the water. At time of writing, the judge was still investigating the circumstances of his death.

The delayed appointment of permanent judges by the Council of the Judiciary has led to temporary appointments of judges who lack security of tenure, which the Supreme Court ruled in 2015 undermines judicial independence. As of November 2016, 254 of 979 lower-court judgeships remained vacant.

In 2017, President Macri asked Congress to initiate the process to remove Attorney General Alejandra Gils Carbó, arguing she did not have the “moral authority” required for the job. Other government officials, however, suggested it would be possible to oust Gils Carbó through an executive decree, so circumventing the legal requirement of a political trial.

Twenty-two years after the 1994 bombing of the Argentine Israelite Mutual Association (AMIA) in Buenos Aires that killed 85 people and injured more than 300, no one has been convicted of the crime.

The investigation stalled when Iran, which Argentina’s judiciary suspects of ordering the attack, refused to allow Argentine investigators to interview Iranian suspects in Argentina. In 2013, Argentina and Iran signed a memorandum of understanding (MOU) that allowed an international commission of jurists to review evidence and question Iranian suspects—but only in Tehran—likely rendering the interviews inadmissible in an Argentine court. A federal court declared the MOU unconstitutional: the Macri administration said it would not appeal.

In August 2017, the government said it had asked Interpol to re-issue red notices—a form of international arrest warrant—to detain several Iranians implicated in the attack. In September, Vice-President Gabriela Michetti called on Iran to collaborate with the investigations during her speech at the United Nations General Assembly.

In January 2015, Alberto Nisman, the prosecutor in charge of investigating the bombing, was found dead in his home with a single gunshot wound to the head and a pistol beside him matching the wound. His death came just days after he had filed a criminal complaint accusing then-President Cristina Fernández de Kirchner and her foreign affairs minister of conspiring with Iran to undermine the investigation.

Later in 2015, a federal court dismissed Nisman’s complaint. However, following an appeal by a federal prosecutor, in December 2016, the judiciary ordered the case reopened. In October 2017, a judge requested that Fernández de Kirchner provide a statement on the case. As of September 2017, courts had not determined whether Nisman’s death was suicide or murder. A new Gendarmerie report published that month stated Nisman had been murdered.

In 2015, a court began the trial of several officials—including former President Carlos Menem, his head of intelligence, and a judge—for their alleged interference with the initial investigation into the bombing. The trial continued at time of writing.

Indigenous people in Argentina face obstacles in accessing justice, land, education, health care, and basic services. Argentina has failed to implement existing laws to protect indigenous peoples’ right to free, prior, and informed consent when the government adopts decisions that may affect their rights—a right provided for in international law.

A survey of indigenous lands, required by law, is being conducted, but slowly. In November 2017, Congress approved a law extending the deadline for completing the survey to 2021.

Abortion is illegal in Argentina, except in cases of rape or when the life of the woman is at risk. But even in such cases, women and girls are sometimes subject to criminal prosecution for seeking abortions, and have trouble accessing reproductive services, such as contraception and voluntary sterilization.

In 2017, “Belen,” a 27-year-old woman from Tucumán province who had been sentenced to eight years in prison in 2016 for aggravated homicide after suffering a miscarriage, was acquitted and released.

Despite a 2009 law setting forth comprehensive measures to prevent and punish violence against women, the unpunished killing of women remains a serious concern. The National Registry of Femicides, administered by the Supreme Court, reported 254 femicides—the violent killing of women based on their gender—but only 22 convictions, in 2016.

In September 2017, Manuel Mansilla was found guilty of murdering his pregnant girlfriend, 14-year-old Chiara Páez, and sentenced to 21 years in prison. Páez’s killing sparked a massive movement to protest violence against women in the country.

In May, the UN Working Group on Arbitrary Detention (UNWAD), which had called for Milagro Sala’s release arguing she had been arbitrarily detained, visited her in jail. The IACHR did so in June, and later issued precautionary measures requesting that Argentine government ensure her safety. In November, the IACHR sent the case to the Inter-American Court of Human Rights, arguing Argentina had not complied with the precautionary measures it had issued in her favor.

In August, the UN Committee on Enforced Disappearances requested that Argentina adopt “an integral and exhaustive strategy” to find Santiago Maldonado. Days later, the IACHR ordered Argentina to adopt all necessary measures to determine his whereabouts.

In February 2017, the Argentine Supreme Court ruled that an Inter-American Court’s decision on a specific case, while binding on Argentina, could not reverse or overrule decisions by Argentine courts. The decision was related to a 2011 ruling by the Inter-American Court that established the state had violated the right to free speech of two journalists who were fined after publishing information of public interest.

President Macri has repeatedly and publicly criticized Venezuela’s poor human rights record and called for the release of its political prisoners. His administration has allowed Venezuelans to apply for the same permits to stay in Argentina that are granted to residents of Mercosur member countries, despite Venezuela’s expulsion from the regional trade bloc. The number of Venezuelans moving legally to Argentina has more than doubled every year since 2014, reaching 35,600 in May 2017.

In March, Argentina hosted delegations from 80 countries for the second international Safe Schools conference, taking stock of the implementation of commitments contained in the Safe Schools Declaration to better protect schools from attacks and military use during armed conflict.