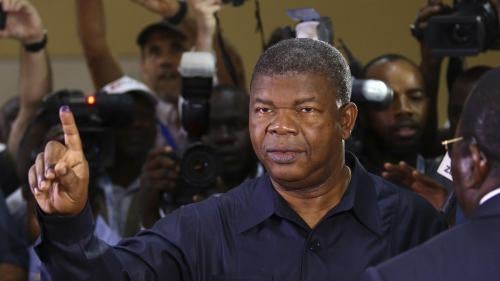 Angola elected a new president, João Lourenço, in September, ending almost four decades of José Eduardo Dos Santos’ repressive rule. Voting was peaceful, but marred by severe restrictions on freedom of expression and assembly, and limited access to information due to government repression and censorship in state media and in private media outlets controlled by ruling party officials.

The new president pledged to govern for all Angolans, and combat two of the country’s major problems: corruption and mismanagement of public funds. Security forces continued to use excessive force, intimidation and arbitrary detention against peaceful protesters. Freedom of the press was threatened after a new media law was enacted, despite opposition from the journalist’s union and other groups.

Angolan media remained largely controlled by the government and people linked to the ruling party, the People's Movement for the Liberation of Angola (MPLA). The government continued to restrict freedom of expression by censoring state-run media and some private media controlled by ruling party officials, which remained the only outlets with nationwide coverage. During the election campaign, election observers from the African Union (AU), the Southern African Development Community (SADC) and Angola’s journalists’ union criticized the pro-ruling party coverage by state media.

With minimal debate, parliament on November 18, 2016, passed five laws that limit freedom of expression, despite opposition from the journalist’s union and other groups. The government referred to the laws as the Social Communication Legislative Package (Pacote legislativo da comunicação social). These laws, signed by then-President Jose Eduardo Dos Santos on January 23, are the press law, television law, broadcast law, code of conduct law for journalists, and statutes of the Angolan Regulatory Body for Social Communication (ERCA, Entidade Reguladora da Comunicação Social Angolana).

The press law gives the Ministry of Social Communication the authority to oversee how media organizations carry out editorial decisions, and to fine or suspend the activities of violators. It also criminalizes publication of a text or image that is “offensive to individuals.” Under the Angolan penal code, defamation and slander are punishable with fines and imprisonment for up to six months. The journalists union challenged the law before the Constitutional Court. At time of writing, the court had not ruled on the case.

For example, on February 24, police blocked a protest in Luanda of about 15 people who were calling for the resignation of the territorial administration minister, Bornito de Sousa. On the same day, police broke up a peaceful protest and detained two activists in Benguela Province who were also calling for the resignation of the minister. On April 19, a court in Luanda sentenced seven activists to 45 days in jail for resisting arrest during a protest against the voters registration process ahead of the August elections. On June 24, authorities detained at least 18 members of the Lunda Tchokwe Protectorate Movement, who were protesting for regional autonomy and an end to police brutality against movement activists. Ahead of the August 23 election, the Ministry of the Interior banned all protests by groups not contesting in the election, claiming that street protests planned by activists posed a security risk.

In a rare show of tolerance, authorities on March 18 allowed a group of women to protest against the criminalization of abortion. Authorities also allowed an opposition party, National Union for the Total Independence of Angola (UNITA), protest march against what the party called irregularities in the election process.

The decree 74/15 required NGOs to go through onerous registration processes, including registering with multiple authorities, such as the Foreign Ministry, and obtaining a “declaration of suitability.” It also allowed authorities to determine the programs and projects that the organizations implemented. Enforcement of the law in March 2015 led to several human rights groups facing difficulties accessing their bank accounts, as some banks demanded to see the required approvals, even though the government was not issuing such documents.

Women’s reproductive rights were threatened after parliament approved an amendment to the abortion law on February 24, making all abortions illegal. As part of the process of replacing Angola’s 1886 penal code, the government had proposed a bill that would criminalize abortion, except in cases of rape, or when the mother’s health is in danger.

However, parliament rejected that proposal and made abortion, without exceptions, illegal and punishable by 4-10 years’ imprisonment. Parliament passed the first reading of the bill without any public consultations, and activists accused parliamentarians of ignoring their views. The final vote on the draft penal code, which had been scheduled for March 23, was cancelled and the bill was withdrawn pending further debate after women marched on the streets supporting  the right to abortion. At time of writing, a new version of the abortion bill had not been submitted to parliament.

Security forces continued to use excessive force with impunity. Authorities repeatedly failed to investigate and prosecute officers who committed abuses. In March, police beat activists with batons and set dogs on a peaceful protest, injuring at least four protesters. Responding to calls for the incident to be investigated, a police spokesman said the use of police dogs was necessary because the group was causing chaos.

In another incident in April, video footage showed a uniformed police officer in Luanda beating a protester with a disability until he fell off his wheelchair. The police then walked away from the scene, as a passerby struggled to lift the man. The video also showed officers pulling banners and leaflets from other protesters with physical disabilities who gathered to protest inaccessible infrastructure and inequality. The police promised to investigate the incident, but at time of writing had not published the results of the investigations. In June, at least one person was reported killed, while 10 others were seriously injured when police fired into crowds of people protesting for the autonomy of the Lunda Chokwe region, in Lunda Norte province.

Reports emerged of violent incidents ahead of the August 23 general election involving members of the ruling MPLA and the main opposition party, UNITA. In May, the governor of Benguela set up a commission of inquiry to investigate the reports of political violence in the province.

On July 31, a senior UNITA official died and six people were injured when unidentified men attacked them in Benguela. UNITA blamed MPLA supporters for the incident. On September 15, during an election celebration, MPLA and UNITA supporters clashed in the Bocoio region of Benguela Province. According to the human rights group OMUNGA, several people were injured, houses and shops were destroyed, and local residents hid in the bush for fear of fighting.

Angola has formally presented its candidature to the United Nations Human Rights Council for the 2018-2020 term. As part of the process, on April 19 it pledged to maintain interaction with civil society to better advocate for the rights of migrants; adopt a national human rights action plan; and reinforce efforts to achieve its goals of advancing the democratic process and diversifying the economy.

Following the August elections, the European Union pledged to support future electoral processes, including efforts to ensure equal access and equitable coverage of all political parties in the media, and the reform of the electoral legislation in line with international principles of inclusiveness and transparency.

Both SADC and the AU expressed approval with the generally peaceful elections. The two bodies advised the authorities to improve equitable coverage and access to public media by all political parties. SADC also urged the government to improve the electoral framework in line with the Revised SADC Principles and Guidelines Governing Democratic Elections, for example by assigning voter registration to the National Electoral Commission. Currently, the voter registration process is organized by the Ministry of Territorial Administration.