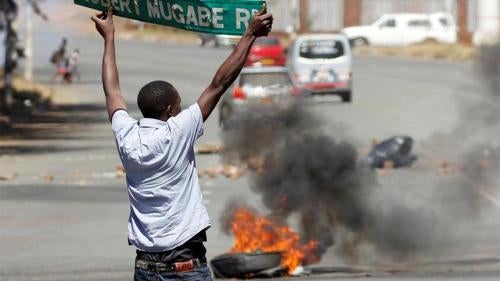 During 2016, the government of President Robert Mugabe intensified repression against thousands of people who peacefully protested human rights violations and the deteriorating economic situation. It disregarded the rights provisions in the country’s 2013 constitution, and implemented no meaningful human rights reforms.

Police abuse increased, and there was excessive use of force to crush dissent. Human rights defenders, civil society activists, journalists, and government opponents, were harassed, threatened or faced arbitrary arrest by police. Widespread impunity continues for abuses by police and state security agents.

The president publicly attacked judges for “reckless” rulings that allowed public protests against his rule, further eroding judicial independence. He also undermined the independence of the Zimbabwe Human Rights Commission (ZHRC), established as an independent commission under the constitution, when he verbally attacked the institution.

At various times since June 2016, hundreds of protesters, including student activists, human rights activists, and opposition supporters were arrested, detained, and later released on bail without charge.

For instance, on July 6, police assaulted and arbitrarily arrested, and charged with public violence, hundreds of protesters across the country, including 86 people in Bulawayo, 105 people in Harare, and 16 people in Victoria Falls. The government blocked internet access and WhatsApp text messaging for several hours to obstruct people protesting under the #Tajamuka/Sesijikile campaign led by Promise Mkwananzi and the #ThisFlag campaign led by Pastor Evan Mawarire. In August, Mawarire and his family fled to the United States after suspected state security agents threatened to kill them.

On August 24 and 26, police arbitrarily arrested over 140 people in Harare on false public violence charges. According to their lawyers, most of those arrested, including security guards, vendors, college students taken from class, did not participate in the protests. Those arrested were later freed on bail after several days in detention.

On September 24, police in Mutare arrested and detained 17 members of the Zimbabwe National Students Union (ZINASU) on charges of allegedly gathering in contravention of the Public Order and Security Act (POSA). After three nights in detention, the Magistrate’s Court freed 15 of the 17 ZINASU members and declared their arrest unlawful. At time of writing, two student leaders remain in custody.

Zimbabwe’s Constitution guarantees freedom of expression and media, but journalists are subject to arbitrary arrest, harassment, and intimidation when reporting on protests. Reports by the Media Institute of Southern Africa (MISA, Zimbabwe) show that from January 2016, police assaulted, harassed, arrested, or detained at least 31 journalists reporting on protests. They include Garikai Chaunza, Edgar Gweshe, Chris Mahove, James Jemwa, and Khumbulani Zamchiya—whom police arrested in June while they reported on a protest in Harare, detaining them for six hours before releasing them without charge.

On July 6, police briefly detained journalists Elias Mambo, Tafadzwa Ufumeli, Richard Chidza, and Godwin Mangudya at Marimba Station, who were covering protests in Mufakose. Police ordered the journalists to delete from their cameras and mobile phones all pictures and video footage of the protests before releasing them without charge.

On August 3, police used batons to beat up journalists Lawrence Chimunhu, Haru Mutasa, Tsvangirai Mukwazhi, Christopher Mahove, Tendai Musiyazviriyo, Bridget Mananavire, and Imelda Mhetu who were covering a protest in Harare. On August 24, a member of the anti-riot police in Harare harassed and beat journalist Lucy Yasin with a baton as she covered a protest. On the same day the police arrested journalist Tendai Mandimika and detained him for three weeks on false public violence charges before releasing him on bail.

On August 25, the police briefly detained journalists Obey Manayiti and Robert Tapfumaneyi. The following day, police arrested photojournalist James Jemwa while covering protests in Harare. He spent a week in detention on public violence charges before being released on bail.

In January 2016, the Constitutional Court declared child marriage unconstitutional and set 18 as the minimum marriage age. In March, scores of members of parliament from the ruling party and the opposition pledged to protect the rights of girls and to fight to end child marriage. That same month Vice President Emmerson Mnangagwa announced that the government was developing laws to make it a criminal offense.

The government has yet to amend or repeal all existing marriage laws that still allow child marriage. It also has not put in place structures to implement the court’s decision and ensure that girls under 18 are not being forced into marriage.

A Human Rights Watch report found that widows are routinely evicted from their marital homes and their property confiscated with little recourse to the formal justice system.

Authorities continued to ignore human rights provisions in the country’s 2013 constitution. The government did not enact new laws or amend existing laws to bring them in line with the constitution and Zimbabwe’s international and regional human rights obligations. The government has not repealed or amended the Access to Information and Protection of Privacy Act (AIPPA), the Public Order and Security Act (POSA), and other laws that severely restrict basic rights. In terms of criminal law, sex between men is punishable with up to one year in prison and a fine.

On September 3, President Mugabe interfered with the judiciary’s independence by publicly attacking judges for “reckless” rulings that allowed protests against his government. His statements also undermined Zimbabwe’s international human rights law obligations to respect due process and judicial independence under the African Charter on Human and Peoples’ Rights and the International Covenant on Civil and Political Rights.

On September 9, Mugabe undermined the independence of the Zimbabwe Human Rights Commission when he dismissed its report as “absolutely false” and described its chairperson as “stupid.” The commission had published a report showing that partisan government officials had denied food aid to opposition supporters. The commission found the government had violated rights to equality, non-discrimination, and the right to sufficient food. An estimated 4.5 million people needed food aid in 2016.

Authorities have not fully investigated the March 9, 2015 abduction and enforced disappearance of pro-democracy activist and human rights defender Itai Dzamara, who remained missing at time of writing. There has been no progress toward justice for serious past human rights crimes.

In 2016, Zimbabwe’s neighbor and key regional actor South Africa remained silent in the face of a police crackdown in Zimbabwe. In July 2016, Gwede Mantashe, secretary general of South Africa’s ruling African National Congress, labelled the Zimbabwe protesters “sponsored elements seeking regime change.” On September 21, in an interview with Reuters, President Ian Khama of Botswana said Zimbabwe's 92-year-old President Mugabe should step aside without delay and allow new leadership. The government of Zimbabwe said it was shocked at Khama’s comments.

The Southern African Development Community (SADC) failed t0 raise concerns about deteriorating human rights conditions in Zimbabwe in 2016. When SADC leaders met for their annual summit in Swaziland from August 29 to 31, 2016, they did not press Mugabe’s government to prevent abuses and respect human rights in the country.

In February 2016, the European Union renewed sanctions of asset freeze and travel bans against President Mugabe, his wife Grace, and Zimbabwe Defence Industries until February 20, 2017. In September 2016, the European Parliament expressed serious concern about the increase in violence against demonstrators in Zimbabwe and called on the government to respect the right to demonstrate peacefully. It condemned Mugabe’s attacks on the judiciary and urged authorities not to interfere with judicial independence. It drew attention to the plight of many women in Zimbabwe and the need to respect their rights.

In August 2016, Australia, Canada, and the United States issued statements in response to protests registering deep concern over use of violence and other human rights violations.

In September 2016, local media reported that the World Bank was preparing an extensive bailout package for Zimbabwe in disregard of the country’s deterioration human rights situation. The World Bank however denied the reports, expressing deep care for the people of Zimbabwe, and said direct funding to Zimbabwe would only resume after the country clears its arrears with the bank.