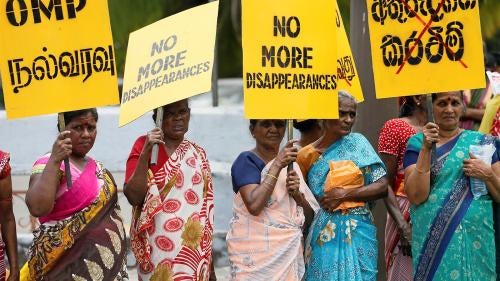 Sri Lanka acted to address some longstanding demands for accountability and political reconciliation linked to the 27-year civil war with the Liberation Tigers of Tamil Eelam, which ended in 2009. The government conducted two public consultations, one on constitutional reform and another on implementing an October 2015 United Nations Human Rights Council resolution on transitional justice.

Although the government, elected in January 2015, did not deliver all reformist promises made during the election campaign, media and civil society groups in the country largely enjoyed continued freedom from surveillance, harassment, and attacks. A long-promised Right to Information bill was enacted in June 2016. There was some progress on emblematic cases linked to the civil war, such as the murder of a prominent newspaper editor, the enforced disappearance of a political cartoonist, and the killing of five youths by state security forces in the eastern district of Trincomalee.

However, despite its pledges, the government failed to abolish the draconian Prevention of Terrorism Act (PTA), and instead used the preventive detention law during a series of arrests in April and May. A draft version of a law intended to replace the PTA retained many problematic clauses including troubling expansions of police powers. The government’s unwillingness to consult adequately before enacting legislation to establish a permanent Office of Missing Persons damaged public trust during the transitional justice process.

The newly appointed Constitutional Council moved rapidly through the year to appoint members to the National Human Rights Commission and the Police Commission, and is expected to continue to work towards restoring the independence of other public service commissions.

A government-appointed independent task force on constitutional reform, constituted in December 2015, conducted nationwide public consultations that ended in May 2016. The taskforce heard from over 2,500 individuals, and received several hundred other submissions. Despite government-imposed time limits, it published a comprehensive public report on its findings on May 31.

The task force recognized some contentious political issues, such as whether Sri Lanka should be a unitary or a federal state, the exact nature of devolution of powers from the center, and the supremacy of Buddhism. Importantly for the protection of fundamental rights, the task force recommended that the constitution be regarded as the supreme law of the land and that the judiciary be tasked with ensuring all legislation complies with the constitution.

In October 2015, the UN Human Rights Council adopted a consensus resolution in which Sri Lanka pledged to undertake many human rights reforms, including resolving the many transitional justice demands arising out of the civil war. Under the resolution, Sri Lanka promised to establish four transitional justice mechanisms, including a special court “integrating international judges, prosecutors, lawyers and investigators” with an independent investigative and prosecuting body. The resolution also called for an office on missing and disappeared persons, a truth-telling mechanism, and a mechanism designed to guarantee non-recurrence and reparations.

The government failed to properly implement important recommendations to improve the human rights situation in the country, including a repeal of the PTA and reforms to the Witness and Victim Protection Law. Other undertakings, such as broader reform of the security sector and return of private lands confiscated by the military, were halting at best. An update from the UN High Commissioner for Human Rights in June 2016 mentioned the need for greater progress, and was due to provide a more comprehensive report to the Human Rights Council in early 2017.

Senior members of government continued issuing contradictory statements on the need to have international participation in the four transitional justice mechanisms, with the president and prime minister both claiming these would be wholly domestic processes, contrary to the Human Rights Council resolution.

Sri Lankan police are not held accountable for routine torture and ill-treatment of individuals taken into custody. Sometimes torture is carried out to extract “confessions,” but it is also used for personal vendettas or to extort funds. Police often used methods designed to leave no visible marks, suggesting a level of institutionalization. The National Human Rights Commission, though limited in resources, visited and actively monitored prisons and detention centers in 2016, and issued directives on procedures to be followed following arrest.

In April and May 2016, the UN special rapporteur on torture, Juan Mendis, visited Sri Lanka and reported that torture by the police Criminal Investigation Department was common. The rapporteur also found an increase in torture in cases of real or perceived threats to national interests by the Terrorism Investigation Division. He reported a near total impunity in both old and new torture cases.

The government attempted a redraft of the Prevention of Terrorism Act but was forced to withdraw it when it failed to meet international standards. A second draft forwarded in October did not ease concerns about ensuring rights of detainees and protecting against custodial torture. The special rapporteur on torture expressed particular concern about detainees held under the PTA and called for its unequivocal repeal.

The PTA allows for arrests for unspecified “unlawful activities” without warrant and permits detention for up to 18 months without the suspect appearing before a court. It has facilitated thousands of abuses over the years, including torture, enforced disappearances, and extrajudicial executions.

While especially problematic during Sri Lanka’s long civil war, authorities continued to use the PTA even after the war ended. Following the discovery of suicide vests in Chavakchcheri in the north, security forces reportedly arrested 11 men in April and May. Many of the arrests were first undeclared, with families reporting only that security forces had abducted the men. Following pressure, particularly from the National Human Rights Commission, security forces admitted to holding them under the PTA.

More than 1 million Sri Lankans are employed overseas, mostly in the Middle East, and many remained at risk of abuse at every stage of the migration cycle, from recruitment and transit, to employment, repatriation, and reintegration. More than a third of Sri Lanka’s migrants are domestic workers, almost exclusively female.

The government took some steps to protect their rights abroad, but many continued to face long working hours with little rest, delayed or unpaid wages, confinement in the workplace, and verbal, physical, and sexual abuse. The kafala (sponsorship) systems in the Middle East ties workers’ visas to their employers; in several countries they cannot transfer jobs without employer consent, and can be punished with imprisonment and deportation if they leave employers.

In June, the government announced that it appointed a committee to study strategies to reduce the number of domestic workers abroad.

In 2016, the UN Committee on Migrant Workers reviewed Sri Lanka’s record under the International Convention on Migrant Workers and their Families. Among other recommendations, the committee called on Sri Lanka to withdraw the Ministry of Foreign Employment Promotion and Welfare January 2014 circular that required a “family background report” for women migrants, as it discriminated against women and denied them the right to seek employment abroad instead of providing support they may need.

State and non-state discrimination and abuses against the lesbian, gay, bisexual, transgender, and intersex (LGBTI) population persist. Sections 365 and 365A of the Sri Lankan Penal Code prohibit “carnal knowledge against the order of nature” and “gross indecency,” commonly understood in Sri Lanka to criminalize all same-sex relations between consenting adults.

Sri Lankan law does not specifically criminalize transgender or intersex people. But no laws ensure that their rights are protected, and police have used several criminal offenses and regulations to target LGBTI people, particularly transgender women and men who have sex with men (MSM) involved in sex work. These include a law against “cheat[ing] by personation,” and the vaguely worded Vagrants’ Ordinance, which prohibits soliciting or committing acts of “gross indecency,” or being “incorrigible rogues” procuring “illicit or unnatural intercourse.”

Some trans women and MSM said that repeated harassment by police, including instances of arbitrary detention and mistreatment, had eroded their trust in Sri Lankan authorities, and made it unlikely that they would report a crime. The community also reported abuse and harassment at the hands of medical authorities, leading many transgender people to self-medicate rather than seeking professional assistance.

Allegations of sexual and other violence committed against women during the civil war are expected to be addressed through the transitional justice mechanisms, although there are concerns that many women will be reluctant to come forward absent an independent victim and witness protection program.

The Sri Lankan government continued its engagement with the international community in stark contrast to the hostility of the previous government, with key actors such as the United States and European Union voicing cautious optimism regarding the government’s efforts to implement the 2015 Human Rights Council resolution.

There were several visits by UN special mandate holders over the course of the year. The commissioner for human rights, Zeid Ra’ad al-Hussein, visited the country in February, and Secretary-General Ban Ki-moon visited in September. Both lauded the progress made by the government, although Zeid called for speedier implementation of the resolution, for greater efforts at confidence-building with the minority populations, and the need for international participation in transitional justice mechanisms.

The Human Rights Council resolution remained largely unimplemented although the government was able to report progress on certain aspects and did seek technical expertise from the relevant branches of the UN and other countries.

The Sri Lankan government initiated discussions with the UN and other stakeholders on the possibility of incorporating Sri Lankan security forces in international peacekeeping operations, although the mechanism for doing so had yet to be finalized given the difficulty of vetting forces who might have been engaged in war crimes.

In November, Sri Lanka appeared before the UN’s Commission Against Torture to respond to allegations of abuse, where it denied allegations of torture and abuse.