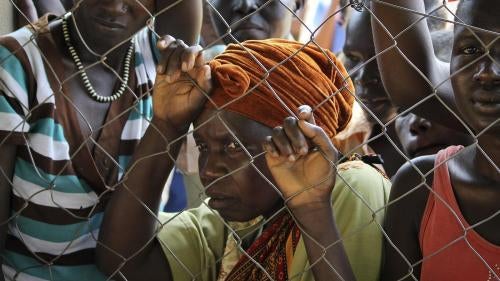 South Sudan’s civil war, which began in December 2013, continued in 2016 with serious abuses against civilians by both government forces and opposition fighters despite a peace agreement signed in August 2015.

Government soldiers killed, raped, and tortured civilians as well as destroying and pillaging civilian property during counterinsurgency operations in the southern and western parts of the country, and both sides committed abuses against civilians in and around Juba and other areas. An additional 200,000 people were forced to flee their homes, bringing the total displaced to 2.4 million. Those left behind, including people with disabilities, have faced serious abuses.

The conflict began in December 2013 when soldiers loyal to President Salva Kiir, a Dinka, and those loyal to former Vice President Riek Machar, a Nuer, fought in the capital following months of growing political tensions. In December 2015, President Kiir dissolved South Sudan’s 10 regional states and created 28 new states, fueling conflict in many areas.

Although the two sides formed a national unity government in April 2016, following the August 2015 peace agreement, they continued to fight in various locations. In July, clashes in the capital, Juba, caused Machar to flee the country. President Kiir then appointed a former ally of Machar, Gen. Taban Deng Gai, as first vice president, prompting Machar’s group to call for a return to war.

In November, UN Special Advisor on the Prevention of Genocide Adama Dieng said the ongoing violence had transformed the conflict into an “ethnic war” and warned of a “potential for genocide.”

Lack of accountability for grave crimes by both sides since 2013 has fuelled the current conflict. Government investigations have rarely led to concrete and lasting accountability measures. A hybrid court envisioned by the peace agreement to investigate and prosecute international crimes committed during the recent conflict has yet to be established by the African Union and the South Sudanese government. 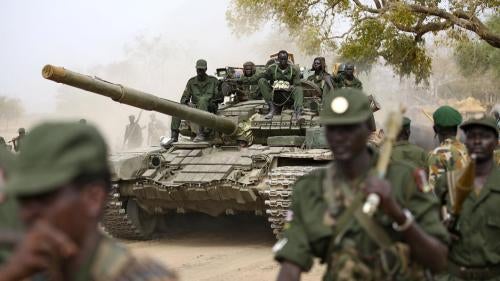 Government forces clashed with rebel groups and conducted counterinsurgency operations in the Equatoria and Western Bahr el Ghazal regions throughout 2016.

During operations in Yambio, Wau and Yei towns, soldiers targeted and killed dozens of civilians and committed a range of other abuses, including enforced disappearances, arbitrary detentions in poor conditions, beating and torture of detainees, and sexual violence. Soldiers pillaged civilian property and burned homes, forcing hundreds of thousands of civilians to flee.

Government forces clashed with rebel groups in various other locations in the Equatorias, with both sides committing abuses against civilians. In Wau, tensions and abuses by soldiers flared again in June after the president sacked and jailed the governor, Elyas Waya Nyipuoch, for criticizing abuses committed by the army.

In Juba, government and opposition forces clashed from July 8 to 11, when the government declared a ceasefire after opposition leader Riek Machar fled the town. Both forces fired and shelled indiscriminately in densely populated areas, injuring and killing scores of civilians. A clinic in a displaced person’s camp located in the main United Nations base in Juba was also hit by shelling, forcing patients to relocate. South Sudan’s army restricted the movements of United Nations Mission in South Sudan (UNMISS) peacekeepers during and after the July fighting.

On February 17 and 18, in Malakal, Upper Nile State, a group of armed Dinka SPLA soldiers and civilians attacked a UN base hosting more than 45,000 mostly Nuer and Shilluk displaced people, killing at least 30 civilians. The attackers systematically burned thousands of shelters to the ground. A UN special investigation concluded that armed Dinka men in SPLA uniforms had breached the UN compound and were responsible for violence and destruction.

On July 11, shortly before the ceasefire that followed Riek Machar’s retreat from the capital, government soldiers attacked a residential compound in Juba hosting expatriate and national staff of humanitarian organizations, executed a prominent Nuer journalist, beat staff members and raped or gang raped several women. In the days following the ceasefire, soldiers raped hundreds of mostly Nuer displaced women near the main UN base in Juba.

In other parts of the country, government soldiers reportedly continued to rape women and girls selected as targets based on their ethnicity.

While some survivors were able to access basic physical and mental healthcare, many did not due to insecurity and limited availability of services. No SPLA soldiers were prosecuted for the sexual violence crimes committed in July.

Both government and opposition forces have used child soldiers since the beginning of the conflict. In April, the UN secretary-general’s report on children and armed conflict noted a sharp increase in the number of incidents of child recruitment, with more than 2,500 children recruited or used, mostly by government forces. Forces aligned with the opposition also continued to recruit and use children.

The UN also reported that hundreds of children were forcibly recruited in August by government affiliated politicians in Unity state. Child soldiers were also reportedly used by opposition fighters in Western Equatoria and Western Bahr el-Ghazal.

Soldiers or armed actors often use schools as homes, preventing children from accessing the premises and attending classes.

In March, Joseph Afandi, a writer with the Arabic daily Al-Tabeer was found beaten and bearing signs of torture in a Juba cemetery after being abducted by security forces. In October, Malek Bol, a journalist with Al-Maugif, was abducted for two days, tortured, and later dumped at a graveyard.

On July 16, Alfred Taban, a veteran journalist and editor of the Juba Monitor, was arrested and detained for 13 days for publishing an op-ed calling for the replacement of the South Sudanese leadership. His newspaper was shut down for a day following his arrest. The Nation Mirror was shut down indefinitely on September 14 for publishing texts critical of President Kiir.

Civil society actors were also harassed and threatened by security forces. Shortly before a visit to Juba by the UN Security Council in September, the government threatened to shut down or deny registration to a number of civil society organizations, including the Community Empowerment for Progress Organization (CEPO) and the South Sudan Action Network on Small Arms (SSANSA).

In a contested decision in December 2015, President Kiir dissolved South Sudan’s 10 states and created 28 new ones, raising fears that the new disposition would benefit certain ethnicities over others.

On February 1, 2016, the South Sudan Legislative Assembly (SSLA) passed a bill, amid controversy, which gives the government sweeping powers to regulate, shut down, and seize assets of nongovernmental and civil society organizations based on declarations or activities deemed political.

Despite official investigations ordered by President Kiir into alleged crimes and human rights violations committed in 2016 by soldiers in Juba, Malakal, and Wau, the government has rarely made the reports of such investigations public, acted on their recommendations, thoroughly investigated, or held perpetrators to account in civilian courts.

The government has not prosecuted soldiers for crimes against civilians in civilian courts in accordance with human rights norms. Two dozen soldiers were tried for crimes committed in Wau and Juba in July and August, but these trials did not meet international fair trial standards. Victims could hardly access the proceedings and the accused were barely investigated prior to their trials. The SPLA reported that at least two soldiers were executed in late July following their conviction by a military court for murder in Wau.

The African Union Commission has yet to establish the hybrid court envisioned in the August 2015 peace agreement to investigate and prosecute international crimes committed in the conflict. The government expressed renewed commitment to the court during a visit by the UN Security Council that followed the Juba fighting in July.

The Intergovernmental Authority on Development (IGAD), as well as China, the European Union, Norway, the United Kingdom, and the United States continued to support and monitor the implementation of the peace agreement signed in August 2015.

UNMISS continued to shelter more than 200,000 civilians forced to flee their homes because of the fighting. UNMISS peacekeepers struggled to protect civilians outside their bases.

There was a marked increase in attacks against the property and staff of UNMISS and humanitarian organizations throughout 2016, amid increasingly hostile rhetoric against the international community.

In early August 2016, following fighting in Juba, the UN Security Council authorized the deployment within UNMISS of a 4,000 strong Regional Protection Force (RPF) tasked with protecting civilians and key infrastructure in the capital. The council threatened to impose an arms embargo should South Sudan continue to restrict the movement of UN peacekeepers or block the deployment of the RPF. At time of writing, no RPF member has been able to enter the country.

In October, following a damning report from an independent UN investigation into the peacekeepers’ failure to respond to the July crisis in Juba, the UN secretary-general sacked the Kenyan force commander of UNMISS. Kenya retaliated by pulling out its entire contingent from the mission.

The UN secretary-general reported continued obstructions to the peacekeeping mission by government forces and authorities. In November, the United States Mission to the United Nations announced it would submit a proposal for an arms embargo over South Sudan, as well as additional targeted individual sanctions. At time of writing, the Security Council had yet to approve a draft resolution.