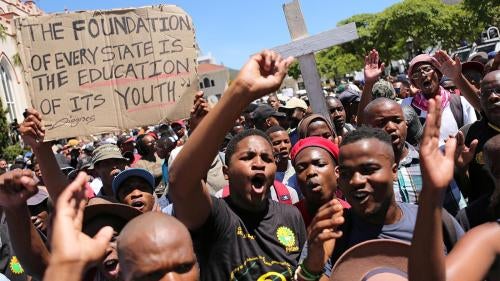 In South Africa, public confidence in the government’s willingness to tackle human rights violations, corruption, and respect for the rule of law has eroded. The government has failed to ensure that an estimated half-million children with disabilities have access to basic education. Rights groups expressed concerns about the government’s failure to develop a national strategy to combat the high rate of violence against women and the continued underreporting of rape. In November, the Claassen Board of Inquiry into suspended National Police Commissioner Victoriah Phiyega’s fitness to hold office completed its inquiry. Its recommendations were not made public.

In March, the Supreme Court of Appeal of South Africa ruled that South Africa had acted unlawfully when the government failed to arrest Sudanese President Omar al-Bashir when he visited South Africa in June 2015 for an African Union (AU) summit. Al-Bashir is subject to arrest warrants for the International Criminal Court on charges of genocide, war crimes, and crimes against humanity in connection with crimes committed in the conflict in Darfur.

South Africa continued to face a number of human rights challenges, as the government failed to hold accountable those responsible for xenophobic attacks on the businesses and homes of refugees, asylum-seekers, and migrants between March and May, 2015. The South African Human Rights Commission (SAHRC) on September 30 said Zulu King Goodwill Zwelithini’s March 2015 speech calling for foreign nationals to “pack their bags and go home,” was hurtful but did not incite xenophobic violence.

South Africa has taken significant steps to improve coordination between government and civil society in combatting violence (including rape and murder) against lesbians and transgender men. To protect the human rights of lesbian, gay, bisexual, and transgender (LGBT) people, in September, the government declared homophobic United States pastor Steven Anderson an undesirable person and barred him and his associates from entering the country.

In September, widespread countrywide student protests for the government to provide free education, the sometimes violent #FeesMustFall demonstrations, resulted in many institutions suspending their academic programs. President Jacob Zuma on October 3, hosted a consultative meeting with stakeholders to find a solution. President Zuma said the purpose of the consultation was to “seek the wisdom of all sectors including parents, students, business and labour, to seek solutions, given that education is a societal issue.”

South Africa became the first country to endorse the Safe Schools Declaration at a global conference in Norway in May 2015. By joining the declaration, it agreed to protect students and education during conflict, and to avoid using educational buildings for military purposes.

Access to Education for Children and Adults with Disabilities

The South African government has failed to guarantee the right to education for many children and young adults with disabilities, affecting an estimated half-million children. Contrary to the government’s international and domestic obligations, many children with disabilities do not have equal access to primary or secondary education and face multiple forms of discrimination and barriers when accessing schools. They are turned away from mainstream schools, denied access to inclusive education, and referred instead to special schools by school officials or medical staff simply because they have a disability. The referrals system needlessly forces children to wait for up to four years at care centers or at home for placement in a special school.

On September 30, SAHRC cleared Zulu King Goodwill Zwelithini of inciting xenophobic violence, that left seven people dead and over 5,000 displaced between March and May 2015. The Africa Diaspora Forum, Lawyers for Human Rights, and some individuals filed a complaint against Zwelithini to the SAHRC, stating that Zwelithini’s statement to media on March 21, 2015, that foreigners should “pack their bags and go home,” had incited violence against foreign nationals and led to xenophobic attacks that started in KwaZulu-Natal and spread to other provinces. The government did not publicly condemn Zwelithini’s reckless and inflammatory statements.

The SAHRC found that Zwelithini’s speech was hurtful towards foreigners and could perpetuate discrimination, but did not amount to hate speech. It gave Zwelithini 60 days to reconcile with foreign nationals and migrants in the KwaZulu Natal province, but he has not said or done anything to comply. Authorities neither thoroughly investigated nor successfully prosecuted those involved in the attacks.

On June 3, the Claassen Board of Inquiry into suspended National Police Commissioner Victoriah Phiyega’s fitness to hold office completed its investigations. President Zuma established the Board of Inquiry in line with a recommendation of the Farlam Commission of Inquiry into the August 2012 Marikana killings of 44 people, including the police killing of 34 miners. The Farlam Commission called for an inquiry into whether Phiyega, and the North West Provincial Police Commissioner, Lieutenant Zukiswa Mbombo, were fit to hold office. On October 14, 2015, President Zuma suspended Phiyega.

Lawyers who investigated the case told the Claassen Board of Inquiry that evidence showed Phiyega breached the constitution and police code of conduct, is unfit for office, and is unable to carry out her duties in accordance with the law. They asked the board to recommend Phiyega’s removal from office. Phiyega refused to testify before the board, which was expected to present its findings and recommendations to president Zuma in August. At time of writing, the Claasen Board of Inquiry had completed its investigations but had not yet submitted its report and recommendations to President Zuma.

Violence against women, including rape and domestic violence, remained widespread and underreported. Although annual crime statistics released by the South African Police Services showed that sexual offences decreased slightly by 3 percent, many gender activists and human rights groups expressed concerns about the continued under-reporting of rape and the government’s failure to introduce a national strategy to combat violence against women.

South Africa has a progressive constitution that prohibits discrimination on the basis of sexual orientation and protects the human rights of LGBTI people. The Department of Justice and Constitutional Development has taken significant steps to improve coordination between government and civil society in combatting violence (including rape and murder) against lesbians and transgender men.

On September 6, Home Affairs Minister Malusi Gigaba announced that due to widespread homophobic attitudes within South African society, and to protect the rights of LGBTI people, homophobic US pastor Steven Anderson and members of his church were banned from entering the country because they promote hate speech and advocate social violence. He said constitutional and legislative guarantees, including the rights of LGBTI persons, must be respected by all. Domestic LGBTI groups lauded the decision.

During 2016, South Africa missed key opportunities to consistently place respect for human rights at the center of its foreign policy practice. While South Africa played an active mediation role, as part of the Southern African Development Community (SADC), in the Lesotho political crisis that followed a failed military coup in August 2014, it remained silent in the face of a rapidly deteriorating human rights situation in Zimbabwe. South Africa did not press Zimbabwe to end police brutality and respect the rights of protesters. Instead, in July, Secretary General of the ruling African National Congress (ANC) party Gwede Mantashe labeled the protesters in Zimbabwe “sponsored elements seeking regime change.”

Some of South Africa’s votes at the United Nations were contrary to the country’s stated human rights principles. For example, in July, South Africa voted against a UN Human Rights Council resolution on the protection of human rights on the internet and abstained on a key HRC vote to appoint an independent expert on sexual orientation and gender identity. The abstention went against the country’s strong constitutional protections and domestic laws around sexual orientation and gender identity. But on November 21, in the UN General Assembly committee, South Africa voted to allow Vitit Muntabhorn, the newly appointed UN expert on sexual orientation and gender identity, to continue his work. The vote was taken after the African Group put forward a resolution to stop the operations of the UN expert who was appointed in September by the Human Rights Council.

On October 21, 2016, Foreign Minister Maite Nkoana-Mashabane announced that South Africa had submitted a notice to the UN Secretary-General Ban Ki-moon of its intent to withdraw as a party to the Rome Statute, the treaty that established and governs the International Criminal Court (ICC). Notification is necessary to trigger the withdrawal, which comes into effect a year after such notice is given. The move comes after it hosted the Sudanese president at the AU Summit in June 2015. Al-Bashir is the subject of two ICC arrest warrants on charges of genocide, crimes against humanity, and war crimes allegedly committed in Darfur. South African courts confirmed the government had a duty to arrest al-Bashir.

Various individuals and organizations, including human rights activists and jurists, in South Africa expressed dismay that their government submitted a notification of withdrawal without parliamentary authorization. Former South African Constitutional Court judge Richard Goldstone called the move unconstitutional. Goldstone was the first chief prosecutor of the International Criminal Tribunal for the Former Yugoslavia and the International Criminal Tribunal for Rwanda. The Democratic Alliance, one of South Africa’s main opposition parties, and the Southern Africa Litigation Centre, a prominent human rights organization, challenged the move in South Africa’s courts.