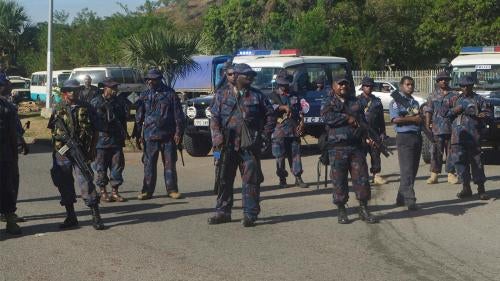 Despite Papua New Guinea’s (PNG) economic boom led by extractive industries, almost 40 percent of the country’s population lives in poverty. The government has not taken sufficient steps to address gender inequality, violence, corruption, or excessive use of force by police. Rates of family and sexual violence are among the highest in the world, and perpetrators are rarely prosecuted.

The government led by Prime Minister Peter O’Neill was the focus of sustained protests throughout 2016, including student boycotts and acts of civil disobedience across a number of sectors of the economy, over allegations of corruption. In July, O’Neill survived a parliamentary no-confidence vote. In June, police opened fire on a student protest in Port Moresby, injuring 23.

Papua New Guinea is one of the most dangerous places in the world to be a woman, with the majority of women experiencing rape or assault in their lifetime and women facing systemic discrimination. While such acts have long been criminalized and domestic violence was specifically proscribed under the 2013 Family Protection Act (FPA), few perpetrators are brought to justice. Three years since the FPA was passed, it has not been implemented.

Police and prosecutors rarely pursue investigations or criminal charges against people who commit family violence—even in cases of attempted murder, serious injury, or repeated rape—and instead prefer to resolve such cases through mediation and/or payment of compensation.

Police also often demand money (“for fuel”) from victims before acting, or simply ignore cases that occur in rural areas. There is also a severe lack of services for people requiring assistance after having suffered family violence, such as safe houses, qualified counselors, case management, financial support, or legal aid.

Violent mobs have attacked individuals accused of sorcery or witchcraft, the victims mostly being women and girls. In February, a mob killed a family of four over accusations of sorcery. In August, reports emerged of villagers attacking a number of women suspected of involvement in sorcery in PNG's Enga province, including one woman who had her hand chopped off.

PNG has one of the highest rates of maternal death in the world, second only to Afghanistan in the Asia Pacific region. Only slightly more than 50 percent of women and girls give birth in a health facility or with the help of a skilled birth attendant, and although the PNG government supports universal access to contraception, two out of three women still are unable to access and use it.

Abortion remains illegal in PNG, except in cases where the mother's life is at risk. In October 2015, a husband and wife were found guilty of killing their unborn child and were each sentenced to four years in prison, the first convictions under PNG’s 1975 abortion law. The woman had experienced difficulties in previous pregnancies and an obstructed labor during the second, leaving her afraid and traumatized. The two were released in June and August 2016, with the remainder of their sentences suspended.

In 2016, the government continued to weaken the country’s most successful anti-corruption agency, Task Force Sweep, by starving it of funding.

Since 2014, the National Fraud and Anti-Corruption Directorate (Anti-Corruption Directorate), led by Matthew Damaru, has had a warrant for the arrest of the prime minister on corruption charges, but a court ordered a stay of execution and the warrant still had not been executed at time of writing. In April 2016, PNG's Supreme Court dismissed a suit brought by Prime Minister O’Neill that sought to prevent anti-corruption police from investigating him.

Following a number of high profile arrests in April by the Anti-Corruption Directorate—including a Supreme Court judge, the attorney-general, and the prime minister's lawyer—Police Commissioner Gari Baki suspended Damaru and ordered the closure of the directorate. The police commissioner said it was closed for “administrative reasons” and “a lack of accountability.” In May, the unit was reopened after the PNG Supreme Court urged Baki to do so.

In January, Baki declared 2016 as the year to discipline police officers responsible for abuse. Baki stated that more than 1,600 complaints of police abuse were filed between 2007 and 2014, with 326 classified as criminal cases. It is unclear how many, if any, resulted in criminal convictions of police officers. Police abuse, including of children, continues to be reported with little accountability even for fatalities or egregious physical abuse.

In June, police opened fire on protesting university students in Port Moresby as they attempted to march on the national parliament. Police confirmed that at least 23 students were injured. In a statement, O’Neill blamed “agitators” for the violence and announced an inquiry “to determine the underlying reasons for continued student unrest promoted by individuals outside the student body.’’ O’Neill maintains that the protests were funded by the political opposition.

Australia transfers asylum seekers that arrive in Australian waters by boat to PNG’s Manus Island for refugee status determination and settlement. More than 900 asylum seekers and refugees remain on Manus Island. Approximately 872 of these are held in a center on a naval base, of whom about 675 are recognized refugees.

In April, the PNG Supreme Court ruled that the detention of asylum seekers and refugees on Manus Island was unconstitutional. O’Neill asked that Australia find alternative arrangements for its detainees and for recognized refugees who do not wish to stay in PNG. Australia resisted the decision but in August, both governments announced they would close the center.

Since April 2016, the center has remained fenced off and guarded, but at time of writing center staff were allowing refugees and asylum seekers to leave the center at scheduled times by bus or on foot under security escort.

To date, neither Australia nor PNG has taken steps to close the center. Many refugees are afraid to leave the center due to acts of violence in the community. For instance, in August, Manus locals robbed and assaulted three refugees; one of the locals attacked them with an iron bar.

Even though the government has officially abolished school fees, primary education is not compulsory and barriers remain, including long distances to school, insecurity, lack of water and sanitation facilities, and limited access for children with disabilities. Thirteen percent of primary school-aged students and 60 percent of secondary school students were out of school in 2012, the latest year for which information is available. The adult literacy rate was an estimated 63 percent.

Despite the existence of a national disability policy, people with disabilities are often unable to participate in community life, go to school, or work because of lack of accessibility, stigma, and other barriers associated with disability. Access to mental health care is limited, and traditional healers are the only option for many people with psychosocial disabilities.

The PNG criminal code outlaws sex “against the order of nature,” which has been interpreted to apply to consensual same-sex acts, and is punishable by up to 14 years’ imprisonment. Gay asylum seekers on Manus Island have reported being shunned, sexually abused, or assaulted by other asylum seekers.

In May 2016, the Australian government issued the report of a parliamentary inquiry into the delivery and effectiveness of its aid to PNG, recommending that it “renew” and “increase” its commitment to PNG’s development.

In May, during the periodic review of PNG’s human rights record at the UN Human Rights Council, countries made more than 150 recommendations on issues including ratification of international treaties, establishing a national human rights commission, promoting gender equality, addressing domestic violence and sorcery-related violence, decriminalizing consensual same-sex relations, and abolishing or placing a moratorium on the death penalty.

In September, PNG responded that it would ratify all core human rights treaties “on the basis of priorities” and that, while there are challenges to implementing reforms, it is committed to establishing a human rights commission, improving gender equality, and addressing domestic violence and sorcery-related violence. It also noted, however, that “LGBT is currently not a priority of the Government” and that the "death penalty is in our national law, however despite this, the current government directive is not to implement until further directions are issued.”