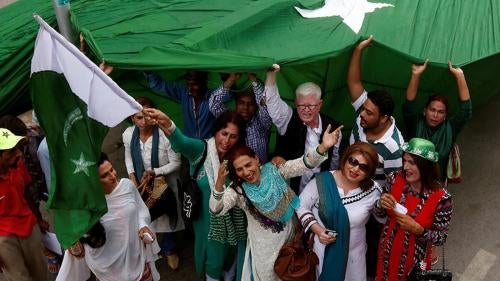 While there were fewer incidents of militant violence in 2016 than in previous years, scores of people were killed in bombings that targeted courts and mosques. Law enforcement and security agencies remained unaccountable for human rights violations and exercised disproportionate political influence, especially on matters of national security and counterterrorism. The military continued to control implementation of a national plan to address terrorism, largely without civilian oversight.

At least 85 people on death row were executed in 2016. Secret military courts continued to operate and hand down death sentences.

The government muzzled dissenting voices in nongovernmental organizations (NGOs) and media. It passed vague and overbroad cybercrimes legislation installing new curbs of freedom of expression and criminalizing peaceful internet use.

Police pressure and abuses compelled thousands of Afghans living in Pakistan to return to Afghanistan or flee elsewhere in 2016.

Suicide bombings, armed attacks, and killings by the Taliban, Al-Qaeda, and their affiliates targeted nearly every sector of Pakistani society, including religious minorities, security personnel, health workers, lawyers, and journalists, resulting in hundreds of deaths. Military courts sentenced at least 100 people to death in connection with the attacks. Shrouded in secrecy, the proceedings raised fair trial concerns.

In May, Aftab Ahmad, a member of the Karachi-based political party, Mutahidda Qaumi Movement (MQM), was killed while in the custody of the Pakistan Rangers, a federal paramilitary force. An autopsy report found that over 35 percent of his body was covered in bruises and abrasions inflicted while he was still alive, indicating torture. In an unusual step, the chief of army staff, Gen. Raheel Sharif, ordered a military inquiry into the death.

Dr. Asim Hussain, a member of the Pakistan People’s Party (PPP), detained on August 26, 2015, on charges including “harboring and treating terrorists and gangsters” at his hospital, remained in custody. Local groups expressed serious concerns about Hussain’s treatment in Rangers’ custody and its impact on his mental health.

At least 19 people remained on death row after being convicted under Pakistan’s draconian blasphemy law and hundreds awaited trial. Most of those facing blasphemy are members of religious minorities, often victimized by these charges due to personal disputes.

The government continued to actively encourage legal and procedural discrimination against members of the Ahmadiyah religious community by failing to repeal discriminatory laws.

In March, at least 74 people were killed and 338 others injured in a suicide bombing in a public park in Lahore. The primary target of the attack was Christians celebrating Easter.

Many journalists increasingly practice self-censorship, fearing retribution from security forces, military intelligence, and militant groups. Media outlets in 2016 remained under pressure to avoid reporting on or criticizing human rights violations in counterterrorism operations. The Taliban and other armed groups threatened media outlets and targeted journalists and activists for their work.

In January, the Pakistan Rangers entered and, without a warrant, searched the Karachi house of Salman Masood, a New York Times journalist. The Interior Ministry issued an apology and ordered an inquiry, while other members of the administration claimed the raid was part of a broader search operation in the area. However, only one other house was searched, raising concerns that the raid’s aim was to harass and intimidate Masood.

In May, four unidentified gunmen killed Khurram Zaki in Karachi. Zaki had been publicly critical of extremist cleric Abdul Aziz and militant sectarian groups, and had been receiving threats. He had confided to friends that he was on several militant “hitlists.”

In August, MQM supporters attacked the office of ARY, one of the country’s largest news broadcasters, after Altaf Husain, the party chief, publicly encouraged them to attack media outlets for not covering party protests.

Militant groups targeted lawyers, courts, and teachers. In January, armed militants attacked Bacha Khan University in Khyber Pakhtunkhwa, killing at least 20 people. In March, a suicide bombing at the district courts in Charsadda, Khyber Pakhtunkhwa, killed 17 people. In August, a suicide attack in Quetta, Balochistan, killed 70 people, most of them lawyers gathered at a hospital emergency room following the shooting of Bilal Kasi, president of the Balochistan bar association. The Islamic State (ISIS) and Jamat-ul-Ahrar, a Pakistani Taliban offshoot, claimed responsibility for the attacks. In September, a Jamaat-ul-Ahrar suicide bombing at the district courts in Mardan killed 14 people.

In August, the Prevention of Cybercrimes law was enacted, which allows the government to censor online content and to criminalize internet user activity under extremely broad and vague criteria. The law also sanctions government authorities to access data of internet users without judicial review or oversight.

A year after the government announced a policy for “Regulation of INGOs in Pakistan,” there were credible reports of the policy being used to harass and impede the work of international humanitarian and human rights groups. In March, three Islamabad-based human rights groups had to stop work for not complying with regulatory requirements. Numerous nongovernmental organizations (NGOs), particularly in Punjab province, were intimidated, harassed, and in some case had their offices sealed on the pretext of implementation of the national plan against terrorism.

Child marriage remains a serious concern in Pakistan, with 21 percent of girls marrying before the age of 18. In January 2016, a proposal submitted to parliament by WHOM aimed to raise the legal minimum age to 18 for females and introduce harsher penalties for those who arrange child marriage. However, on January 14, 2016, the proposal was withdrawn following strong pressure from the Council of Islamic Ideology, a body that advises the parliament on Islamic law. The council criticized the proposal as “anti-Islamic” and “blasphemous.”

The government continued to fail to address forced conversions of women belonging to Hindu and Christian communities.

In June, Zeenat Rafiq, 18, was burned to death in Lahore by her mother for “bringing shame to the family” by marrying a man of her choosing. In May, family members tortured and burned to death a 19-year-old school teacher in Murree, Punjab, for refusing an arranged marriage. In May, the body of Amber, 16, was found inside a vehicle that had been set on fire in Abbottabad, Khyber Pakhtunkhwa, after a jirga, or traditional assembly of elders, ordered her death for helping her friend marry of her own choice. In July, Qandeel Baloch, a well-known Pakistani model was killed by her brother in a so-called honor killing.

Pakistani law allows the family of a murder victim to pardon the perpetrator. This practice is often used in cases of “honor” killings, where the victim and perpetrator frequently belong to the same family, in order to evade prosecution. The 2004 Criminal Law (Amendment) Act made “honor killings” a criminal offense, but the law remains poorly enforced. An anti-honor killing bill seeking to eliminate the option of murder committed in the name of “honor” to be “forgiven” was passed by the parliament in October.

Use of child suicide bombers by the Taliban and other armed groups continued in 2016.

In May, the United Nations Committee on the Rights of the Child concluded its review of Pakistan and expressed concern about a number of issues affecting children including executions, the impact of sectarian violence and terrorism, and alleged torture and ill-treatment in police custody.

The Pakistan government failed to meet its international legal obligation to protect more than 2 million Afghans in the country, including those not registered as refugees, from harassment and other abuses.

The number of Afghans repatriating from Pakistan increased in 2016 due to coercive pressure from local governments; at the end of August, about 70,000 registered refugees had been repatriated.

Pakistan’s penal code criminalizes sexual behavior between men with possible life imprisonment. In 2009, Pakistan’s Supreme Court called for improved police response to cases involving transgender people, and to ensure the rights of transgender people to basic education, employment, and protection. However, despite the court order, violent attacks on transgender and intersex women in Khyber Pakhtunkhwa province surged in 2016, with unknown assailants frequently targeting those involved in activism.

Official responses have been inadequate. Since January 2015, human rights groups in Khyber Pakhtunkhwa have recorded dozens of threats to, and attacks on, people and property, including abuses while in police custody. In a widely publicized case in May, Alisha, a 23-year-old transgender activist, was shot eight times in Peshawar, and died in hospital while staff debated whether to put her in the male or female ward. In September, the National Commission for Human Rights called on the government to investigate the attacks.

Pakistan has more than 8,000 prisoners on death row, one of the world’s largest populations of prisoners facing execution. Pakistani law mandates capital punishment for 28 offenses, including murder, rape, treason, and blasphemy. Those on death row are often from the most marginalized sections of society, including people with disabilities. At least 85 people were executed in 2016.

Pakistan’s volatile relationship with United States, the country’s largest development and military donor, deteriorated amid signs of mistrust. US foreign assistance to Pakistan fell to the lowest level since 2007. In August, the US stopped payment of US$300 million in military reimbursements to Pakistan for not taking adequate action against the Haqqani network, a Taliban-affiliated group that is accused of planning and carrying out attacks on civilians, government officials, and NATO forces in Afghanistan.

The United Nations high commissioner for human rights expressed concern after historically tense relations between Pakistan and India further deteriorated in 2016, with both countries accusing each other of facilitating unrest and militancy. Scheduled talks to resolve longstanding disputes over security, territory, and sharing river water resources stalled.

In September, an armed group attack on an Indian military base in the Indian state of Jammu and Kashmir heightened tensions between the two sides. India claimed that the attackers were backed by the Pakistan government. Pakistan denied involvement.

The United Nations high commissioner for refugees termed Pakistan’s treatment of Afghan refugees as a “concerted push” to repatriate a large number of refugees. Relations with Afghanistan remained characterized by mutual hostility and mistrust. The Afghan government accused Pakistan of allowing the Haqqani network to operate from Pakistan to carry out attacks in Afghanistan. Pakistan maintained that the network had been dismantled.