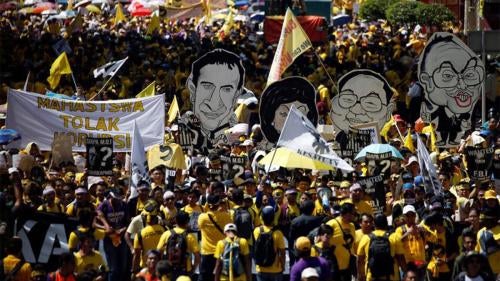 The Sedition Act and the Communications and Multimedia Act (CMA) continue to be the laws most frequently used against critical speech. In August 2016, vice president of the Parti Amanah Negara (PAN) Youth, Mohd Fakhrulrazi Mohd Mokhtar, was sentenced to eight months in prison for sedition for calling for the release of jailed opposition leader Anwar Ibrahim at a rally in February 2015. In April, a court sent activist Haris Ibrahim to prison for eight months on a sedition charge for a speech he gave in May 2013 challenging the results of the 2013 general election.

Section 233(1) of the CMA provides criminal penalties of up to one year in prison for a communication that “is obscene, indecent, false, menacing or offensive in character with intent to annoy, abuse, threaten or harass another person.” The broadly worded law has been repeatedly used against those who allegedly insulted Najib or Malaysia’s royalty on social media, and against individuals calling for Najib to resign.

Graphic artist Fahmi Reza is facing two counts under section 233 for posting an online image of Najib in clown make-up. Social media posts allegedly insulting to the royal family of Johor led to at least a dozen criminal prosecutions in 2016. In June 2016, a court sentenced 19-year-old Mohammed Amirul Azwan Mohammad Shakri to a year in prison after he pled guilty to 14 counts of insulting the sultan of Johor on Facebook. Prosecutors charged activist Khalid Ismath with 11 counts of violating section 233 of the CMA and three counts of sedition for posts on a solidarity page for Kamal Hisham Jaafar, a former legal adviser to the Johor royal family who was detained on allegations of corruption.

On November 14, vice president of the opposition Parti Keadlian Rakyat, Rafizi Ramli, was convicted of violating the Malaysian’s Official Secrets Act for disclosing a page of the auditor-general’s report on the 1MDB scandal, which remains classified as an official secret despite having been submitted to parliament in April. He was sentenced to 18 months in jail, which disqualifies him from serving in parliament for five years after his sentence finishes.

Although successive prime ministers have pledged not to censor the internet, authorities have repeatedly used the CMA to block websites, including those reporting on allegations of corruption. Censors blocked the UK-based website Sarawak Report in June 2015, and the website Medium, which was printing Sarawak Report’s articles, in January 2016. Also blocked were the Malaysia Chronicle, regional news website Asia Sentinel, and at least four local blog sites commenting on political matters.

On February 25, 2016, the government blocked the online news portal the Malaysian Insider under section 233 of the CMA for publishing “unverified information.” While the Malaysian Multimedia and Communications Commission (MCMC) did not specify what articles led to the blockage, the Malaysian Insider had recently published an article citing a source in the Malaysian Anti-Corruption Commission stating that the commission had “credible evidence” to charge Najib with corruption. On March 14, still blocked by authorities, the Malaysian Insider shut down, citing commercial reasons. The portal’s editor, Jahabar Sadiq, told the BBC that the site had been losing money since it was blocked, with advertisers holding off buying ads until the block was lifted.

The government continues to prosecute individuals for participation in peaceful assembly, in violation of international human rights law. Those holding a demonstration without giving notice or participating in “street protests” are routinely arrested or called in for questioning, and many charged with criminal offenses. In August 2016, after the US Department of Justice issued a civil forfeiture complaint seeking to seize assets purchased with funds allegedly looted from 1MDB, a group of students organized a rally calling for the individual referred to as “Malaysian Official No. 1” in the complaint and widely believed to be Prime Minister Najib, to be identified and arrested. Although police did not interfere with the rally, they called in the organizers and several political figures who spoke at the event for questioning for sedition, “activity detrimental to parliamentary democracy,” and violation of the overly restrictive Peaceful Assembly Law.

The Societies Act restricts the right to freedom of association by requiring that organizations with seven or more members register with the registrar of societies. The law gives the minister of home affairs “absolute discretion” to declare an organization illegal, and also provides the government supervisory authority over political parties. According to the Registry of Societies’ website, as of September the registrar had rejected more than 36 percent of applications to form organizations submitted in 2016.

Police torture of suspects in custody, in some cases resulting in deaths, and excessive use of force in apprehending suspects remained serious problems in 2016, as did a lack of accountability for such offenses. In January 2016, Malaysian human rights NGO Suara Rakyat Malaysia (SUARAM) released letters from six individuals detained without trial under the Security Offenses (Special Measures) Act detailing the torture and ill-treatment they had suffered while in custody, including beatings and sexual humiliation.

To date, no one has been held accountable for the mistreatment. In April 2016, the Enforcement Agencies Integrity Commission (EAIC) found that N. Dharmendran, who died in police custody in 2013, was beaten to death and recommended that the officers responsible be held to account. In June 2016, however, a court acquitted all four officers of all charges, continuing the longstanding impunity for such offenses.

On August 1, the controversial National Security Council Act came into force. The law gives sweeping powers to a council headed by Prime Minister Najib to declare regions, including the entire country, as security areas to protect “any interest of Malaysia.” Once a region is declared a security area, the law suspends many restraints on police powers there, allowing the authorities to conduct arrests, searches, and seizures without warrants.

Malaysia continues to detain individuals without trial under restrictive laws. Both the 1959 Prevention of Crime Act and the 2015 Prevention of Terrorism Act give government-appointed boards the authority to impose detention without trial for up to two years, renewable indefinitely, to order electronic monitoring, and to impose other significant restrictions on freedom of movement and association, with no possibility of judicial review. The similarly restrictive Security Offenses (Special Measures) Act allows for preventive detention of up to 28 days with no judicial review.

Malaysia retains the death penalty for various crimes, with the sentence mandatory for 12 offenses, including drug trafficking. Nearly 1,000 people are estimated to be on death row. The government is not transparent about when and how decisions are made to carry out executions, and in March executed three men after giving only two days’ notice to their families. The government has said it is considering amending the law to change the mandatory death penalty provisions, but has yet to take steps to do so.

Malaysia is not a party to the 1951 Refugee Convention, and refugees and asylum seekers have no legal rights in the country. Over 150,000 refugees and asylum seekers, the vast majority of whom come from Burma, have registered with UNCHR in Malaysia but are unable to work, travel, or enrol in government schools. The lack of status leaves them highly vulnerable to abuses. Many of those who seeking refuge are treated as “illegal migrants” and locked up in overcrowded and unsanitary immigration detention centers. Female refugees are particularly vulnerable to abuse, and there is evidence of large numbers of coerced and forced marriages of ethnic Rohingya women and girls from Burma.

No progress has been made in identifying and investigating suspects involved in the deaths of over 100 suspected victims of trafficking whose bodies were found in mass graves on the Thai-Malaysian border in 2015. The Malaysian government has failed to effectively implement the amendments passed in 2014 to Malaysia’s 2007 anti-trafficking law, in particular by taking the necessary administrative steps to provide assistance and work authorization to all trafficking victims who desire it, while ensuring their freedom of movement.

Despite these failures, Malaysia inexplicably remained on the Tier 2 “watch list” in the annual Trafficking in Persons Report prepared by the United States Department of State as a country viewed as making a “significant effort” to meet the standards of the Trafficking Victims Protection Act.

The government has said it intends to introduce amendments to the Legal Profession Act that would allow the government to interfere with and obstruct the bar’s actions. The proposed amendments would empower the minister in charge of legal affairs to appoint two members of the Bar Council, and to issue rules and regulations governing bar association elections.

In addition, they would increase the quorum needed for a general meeting from 500 to 4,000 members, or 25 percent of the bar's 17,000 membership, making it virtually impossible for the bar to take action at its general meetings. The bill to amend the Legal Profession Act is likely be introduced when parliament next sits in March 2017.

Discrimination Based on Gender, Sexual Orientation, and Gender Identity

Discrimination against lesbian, gay, bisexual, and transgender (LGBT) people is pervasive in Malaysia. Article 377A of the penal code criminalizes same-sex activity between men with punishments of up to 20 years in prison and whipping. Numerous Sharia-based laws and regulations prohibiting a “man posing as a woman,” sexual relations between women, and sexual relations between men effectively criminalize LGBT people.

Child marriage is permitted under Malaysian law, and the government’s failure to collect data on age of marriage of women and girls presents an obstacle to even discussing the problem. An effort in 2016 by activists to raise the age of marriage to 18 was blocked in the lower house of parliament.

Malaysia positions itself in the United Nations and the international community as a moderate Muslim state prepared to stand up to Islamist extremism, and this year established a Regional Digital Counter-Messaging Communications Centre to counter Islamic State propaganda, earning support from the US and its allies. Nevertheless, both the US Department of State and the European Parliament have expressed concern about the country’s deteriorating human rights situation.

In December 2015, the European Parliament passed a resolution deploring “the deteriorating human rights situation in Malaysia and in particular the crackdown on civil society activists, academics, media and political activists” and expressing concern about the number of people facing charges or arrest under the Sedition Act.”

In March 2016, the US State Department issued a statement expressing its concern about “actions to restrict access to domestic and international reporting on Malaysian current affairs” and calling on the Malaysian government to ensure that its laws fully respect the right to freedom of expression.

In 2016, Malaysia served as a non-permanent representative to the UN Security Council, where it acted as the chair of the Working Group on Children and Armed Conflict. Malaysia continued its close engagement with China, its largest trading partner. In November, Malaysia agreed to buy four Chinese naval vessels and pledged with Beijing to handle disputes in the South China Sea bilaterally.