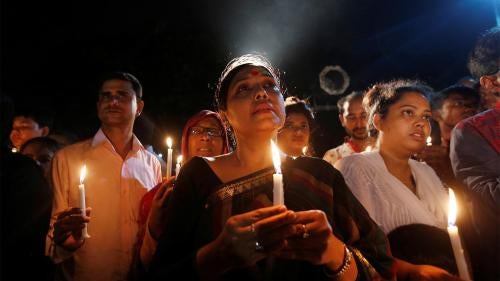 On July 1, armed gunmen attacked the Holey Artisan Bakery, a café in Dhaka, killing 21 people, including foreigners, while holding Bangladeshi staff and guests hostage until security forces stormed the café the next morning. On July 8, three people were killed at a checkpoint when gunmen carrying bombs tried to attack a gathering to mark the Muslim Eid holiday.

Although Islamist extremist groups, including the Islamic State or ISIS, claimed responsibility for most of these killings, the government blamed domestic groups, and said some had links to the main opposition political parties. Thousands of people were arrested, and dozens of alleged members or supporters of extremist groups are said to have been killed in armed encounters.

Fire and safety factory inspections continued in the garment industry following agreements between big brands and the Bangladeshi government arising out of the 2013 Rana Plaza disaster. However, a September fire in a packaging factory killed at least 24 people, highlighting the need for further efforts to ensure worker rights and safety. 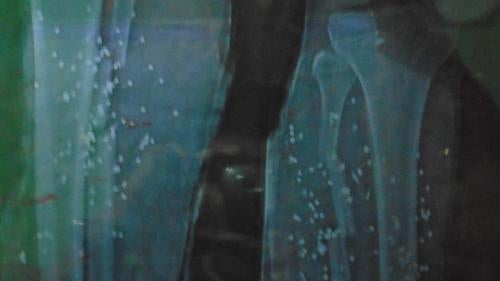 Bangladesh security forces have a long history of arbitrary arrest, enforced disappearance, and extrajudicial killing, raising concerns about recent arrests and deaths. The Detective Branch of the police, the Bangladesh Border Guards (BGB), the Directorate General Forces Inspectorate (DGFI), and the Rapid Action Battalion (RAB) have all been accused of serious violations.

Following the July attack on the Holey Artisan Café, security forces reportedly arbitrarily detained and in many cases killed suspected militants. Two of the hostages in the attack were secretly arrested and detained for over a month until international and national pressure forced the government to admit to holding them in detention. A kitchen assistant, initially suspected to be one of the attackers, was allegedly tortured to death. The government announced several raids in various parts of the country but, due to lack of transparency about security force abuses and the ongoing government clampdown on media, details of those killed or arrested remain unclear.

Journalists are also a common target. The editor of the English-language Daily Star, Mahfuz Anam, faces a total of 54 criminal defamation cases and 15 sedition cases. Fifty-five cases have been filed against editor Matiur Rahman and some journalists associated with the country’s highest circulation daily, Prothom Alo, for criminal defamation and “hurting religious sentiment.”

Several laws were proposed in 2016 to increase restrictions on freedom of expression. The Distortion of the History of Bangladesh Liberation War Crimes Act provides for imprisonment and fines if details of the 1971 war of independence are debated or disputed. The Foreign Donation (Voluntary Activities) Regulation Act, passed in October, to control nongovernmental organizations (NGOs) will hinder freedoms of expression and association. Proposed Press Council Act amendments include provisions for closing newspapers.

The government continues to use the overly broad and vague Information and Communication Technology Act against people critical of decisions and activities of senior government officials or their families.

Bloggers expressing secular views and editors and writers supporting sexual minority rights were attacked in 2016, many of them hacked to death in public spaces. While authorities condemned the attacks, some recommended that individuals holding unpopular views censor themselves, implying that the responsibility for avoiding such attacks lay with the victims.

Several religious leaders were killed or injured in targeted attacks, allegedly by the same extremist Muslim groups that targeted secular writers. In April, the advocacy group Hindu-Buddha-Christian Oikya Parishad said there had been three times more incidents of violence against minority communities in the first three months of 2016 than in all of 2015. Hindu shrines, temples and homes were attacked over the October 2016 Diwali festival. The government responded by arresting several hundred suspects, but some sporadic attacks against the Hindu community continued.

Thousands of indigenous people in the Chittagong Hill Tracts and other areas are at risk of forced displacement.

Workers in the tanneries of Hazaribagh, a residential area in Dhaka, continue to suffer from highly toxic and dangerous working conditions, while residents of nearby slums complain of illnesses caused by the tanneries’ extreme pollution of air, water, and soil. The government continues its de facto policy of not enforcing labor and environmental laws with respect to the tanneries and has failed to insist on the relocation of the tanneries to a dedicated industrial zone in Savar, ignoring a High Court decision from 2001.

Some 20 years after the problem of arsenic in Bangladesh’s drinking water first came to the world’s attention, 20 million people in Bangladesh are still drinking water contaminated with arsenic above the national standard. Deeper wells drilled down approximately 150 meters into the ground can often supply higher-quality water without arsenic, but some politicians are diverting funds for such wells to political supporters and allies, a practice facilitated by a government policy permitting national parliamentarians to influence the siting of 50 percent of all new government water points.

Bangladeshi authorities again failed to implement their commitments under the Sustainability Compact in 2016. These include amending the Labour Act and laws governing Export Processing Zones to bring them in line with international standards. Largely, factory officials were not held accountable for attacks, threats, and retaliation against workers involved with unions.

In August, a Bangladeshi court charged 18 people with murder for the 2013 collapse of the Rana Plaza textile factory, which killed 1,135 people and injured hundreds.

In September, another factory fire and building collapse in a packaging factory killed 31 workers and injured another 50.

Bangladesh government data indicates that the percentage of girls marrying before age 18 declined from 65 percent in 2014 to 52 percent in 2016, and that 18 percent of girls still marry before the age of 15, the highest rate in Asia and among the highest in the world. In 2014, the government pledged to end marriage of children younger than 15 by 2021, and marriage younger than 18 by 2041.

In 2016, the government undermined progress toward these goals by continuing to push for weakening of the law governing the minimum age of marriage. At present, the minimum age of marriage for women is 18 with no exceptions, but in a draft law sent to the parliament in 2016, the government proposed to allow girls below that age to marry under “special cases” such as “accidental” or “illegal pregnancy.” There is no age limit to how early girls can marry under this exception. A national plan on ending child marriage, promised by end-2014, had still not been finalized at time of writing.

Stalking, sexual harassment, and violent retaliation against and even murder of women and girls who protest such harassment continued in 2016. Prompt investigation and prosecution in such cases continues to be rare.

Indigenous women and girls face multiple forms of discrimination due to their gender, indigenous identity, and socio-economic status; they are especially vulnerable to sexual and gender-based violence.

Millions of Bangladeshis work abroad, sending home remittances worth billions of US dollars. In 2016 alone, almost 100,000 women migrated overseas, mostly to Gulf countries, for domestic work. The government has sought to increase the recruitment of such workers without putting in place adequate mechanisms to protect them against workplace abuses. Bangladeshi workers in the Gulf continue to report being deprived of food and forced to endure psychological, physical, and sexual abuse. In some cases, such abuses amount to forced labor or trafficking. Some Bangladeshi domestic workers pay high recruitment fees and take out loans in order to migrate.

Bangladesh has set a minimum salary for domestic workers in the Gulf equivalent to roughly US$200, the lowest minimum salary of all sending countries—and its embassies in the region do not provide adequate protection and assistance to many Bangladeshi nationals there.

Bangladesh began its first census of undocumented Rohingya refugees in June, setting off fears that it might lead to a mass relocation or forcible repatriation to Burma. About 32,000 Rohingya are sheltered in camps administered by the United Nations, but hundreds of thousands who have never been allowed to register as refugees or to lodge asylum claims live undocumented in squalid, makeshift camps, or in private dwellings scattered around southeast Bangladesh, vulnerable to human traffickers and exploited as cheap labor.

The International Crimes Tribunal (ICT), set up to address laws of war violations committed during Bangladesh’s 1971 independence movement, continued its operations in 2015 without addressing serious procedural and substantive defects. In September, the government executed Mir Qasem Ali, a senior member of the executive committee of the opposition Jamaat-e-Islaami party, for crimes he alleged committed in 1971, even as the country’s chief justice criticized the attorney general, the prosecution, and investigators for producing insufficient evidence in the case. The government secretly detained Ali’s son, a key member of his defense team, denied him access to his father before execution, and forbade him from participating in the funeral.

Prominent gay activists Xulhaz Mannan, the founder of Roopbaan, Bangladesh’s first lesbian, gay, bisexual, transgender, and intersex (LGBTI) magazine, and Mahbub Rabby Tonoy, the general secretary of the group, were hacked to death in April. Al-Qaeda in the Indian Subcontinent (AQIS) claimed responsibility for the killings. Fearing for their lives, many LGBT activists sought temporary refuge outside the country.

“Carnal intercourse against the order of nature” carries a maximum sentence of 10 years in prison. The government has twice rejected recommendations to repeal the colonial-era law during its Universal Periodic Review at the UN Human Rights Council.

The Bangladesh cabinet in 2014 declared legal recognition of a third gender category for hijras—a traditional cultural identity for transgender people who, assigned male at birth, do not identify as men—but the absence of a definition of the term or procedure for gaining recognition of third gender status led to abuses in implementation of the legal change. In June and July 2015, a group of hijras were subjected to harassment and invasive and abusive physical examinations at a government hospital as a requirement to join a government employment program.

India, the United Kingdom, and the United States, countries with significant influence over the Bangladesh government, remained largely silent on the country’s human rights record in their public statements in 2016. The UK said nothing publicly at all.

The US Department of Justice funded and trained an internal investigations program within the RAB, but the program produced no human rights prosecutions or convictions in 2016, and US authorities said little publicly to signal the importance of holding RAB officers accountable for human rights crimes. In July, Secretary of State John Kerry offered US assistance to Bangladeshi authorities investigating the militant attack on the Holey Artisan Bakery that killed 21 people in Dhaka.

The United Nations High Commissioner on Human Rights raised concerns about the lack of fairness in the war crimes trials and about arbitrary and illegal arrests, but the Bangladeshi government ignored the statements.