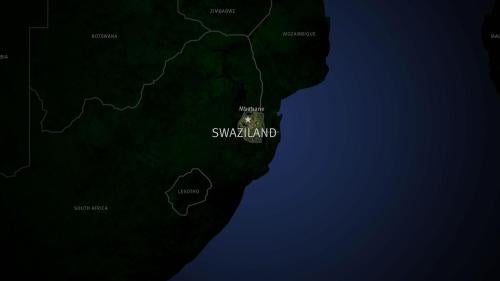 Respect for human rights and the rule of law continued to decline in the Kingdom of Swaziland, ruled by absolute monarch King Mswati III since 1986. Political parties remained banned, as they have been since 1973, judicial independence continued to be severely compromised, and repressive laws used to target critics of the government and the king.

As in previous years, Swazi authorities failed to carry out reforms to lift severe restrictions on civil and political rights. The Suppression of Terrorism Act, the Sedition and Subversive Activities Act of 1938, and other similarly draconian legislation provided sweeping powers to the security services to halt pro-democracy meetings and protests and to curb any criticism of the government, however banal, even though such rights are guaranteed under Swaziland’s 2005 constitution.

Severe government restrictions on freedom of association and assembly continued. On February 28, Swazi police broke up a meeting of the Trade Union Congress of Swaziland (TUCOSWA) in Manzini, the country’s second largest city, because authorities were unhappy with an agenda item on multi-party democracy.

On March 14, police violently barred TUCOSWA’s national executive committee from meeting at the premises of the Swaziland National Association of Teachers (SNAT), one of its members, claiming that TUCOSWA was not a registered entity. SNAT’s secretary general, Muzi Mhlanga, was assaulted by the police who knocked out one of his front teeth when he tried to take photographs of the police action. Previously registered in 2012, TUCOSWA was banned in 2013 when it called for a boycott of the 2013 general election, which failed to include opposition political parties. Subsequent attempts to register were denied. TUCOSWA submitted a new application in December 2014 under the country’s amended Industrial Relations Act. It was registered on May 12, 2015.

Political activists faced trial and detention under security legislation and charges of treason under common law. The Suppression of Terrorism Act of 2008 placed severe restrictions on civil society organizations, religious groups, and media. Under the legislation, a “terrorist act” includes a wide range of legitimate conduct such as criticism of the government. State officials used the legislation to target perceived opponents through abusive surveillance, unlawful home and office searches, and arbitrary arrests.

Two leaders of a banned political party, the People's United Democratic Movement (PUDEMO), Mario Masuku and Maxwell Dlamini, were accused under the Suppression of Terrorism Act of criticizing the government by singing a pro-democracy song and shouting “Viva PUDEMO” during a May Day rally in 2014. After more than a year in custody, they were granted bail in July 2015 by the Swaziland High Court. The trial continued at time of writing. If convicted, they could serve up to 15 years in prison. Both men had previously been arrested by Swazi authorities under the same legislation: Masuku in November 2008 for a speech at a funeral and Dlamini in 2010 for his role in organizing student protests. Both men were later acquitted of all charges.

In April 2014, PUDEMO General Secretary Mlungisi Makhanya was also arrested under the Suppression of Terrorism Act along with six other PUDEMO members for wearing a T-shirt protesting the arrest of journalist, Bheki Makhubu, and human rights lawyer, Thulani Maseko.  The seven were released on bail after two weeks in detention. His trial also continued at time of writing.

In September 2015, eight trade union leaders and human rights defenders, including Masuku and Dlamini, challenged the constitutionality of the Suppression of Terrorism Act in the High Court of Swaziland. At time of writing the case was ongoing.

Journalists and activists who criticized the government were often harassed and arrested. The Sedition and Subversive Activities Act continued to restrict freedom of expression through criminalizing alleged seditious publications and use of alleged seditious words, such as those which “may excite disaffection” against the king. Published criticism of the ruling party is also banned. Many journalists practiced self-censorship, especially with regard to reports involving the king, to avoid harassment by authorities.

On June 30, the Supreme Court of Swaziland granted an appeal by human rights lawyer, Thulani Maseko, and editor of The Nation magazine, Bheki Makhubu, and ordered their immediate release from prison. Maseko and Makhubu were arrested in March 2014 for two articles they published in The Nation questioning the impartiality of the judiciary, and sentenced to two years in prison. Civil society groups dismissed the trial as a sham.

In July 2014, The Nation and its publishers were fined an equivalent of US$9,500 by the Swaziland High Court for publishing “seditious” information in the two articles that Maseko wrote.

Authorities also barred media from reporting on issues they deemed sensitive. For example, when scores of young girls died in a road traffic accident on August 28 on their way to an annual Umhlanga festival where thousands of virgins dance before the king to celebrate womanhood and virginity, authorities blocked media reporting of the incident. The government later said 13 people had died. Regional and international media disputed the government’s figure and estimated the death toll at 65.

Although the constitution provides for three separate organs of government–the executive, legislature, and judiciary–under Swaziland’s law and custom, all powers are vested in the king. The king exercises absolute authority over the cabinet, parliament, and judiciary.

The king appoints 20 members of the 30-member senate, 10 members of the house of assembly, and approves all legislation passed by parliament. The king also appoints judges, and, if he wishes, fires them. On June 17, the king fired Chief Justice Michael Ramodibedi for “serious misbehavior” following allegations of abuse of office and corruption. Ramodibedi, previously a close ally of the king, had presided over a partial judiciary and had played a leading role in the authority’s crackdown on human rights.

The constitution provides for equality before the law, but also places the king above the law. In 2011, Ramodibedi issued a directive which protected the king from any civil law suits, after Swazi villagers claimed police had seized their cattle to add to the king’s herd.

The government has failed to take the necessary steps to operationalize the Human Rights and Public Administration Commission, established in 2009, which remained ineffective due to lack of funding, human resources, and enabling legislation. In its five years of existence the commission has not produced any report about its work or role.

Swaziland’s dual legal system, where both Roman-Dutch common law and Swazi customary law operate side by side, has resulted in conflict leading to numerous violations of women’s rights, despite constitutionally guaranteed equality. In practice, women, especially those living in rural areas under traditional leaders and governed by highly patriarchal Swazi law and custom, are often subjected to discrimination and harmful practices.

Young women and girls are forced to take part in cultural activities like the Umhlanga reed dance. Families of girls and young women who fail to take part in such cultural activities are often punished or fined by their chiefs. Traditional structures and practices prohibit women from speaking in public at men’s gatherings and present significant challenges for women’s political participation. Violence against women is endemic. Survivors of gender-based violence have few avenues for help as both formal and customary justice processes discriminate against them.

Civil society activists have criticized the widely held view among traditional authorities that human rights and equal rights for women are foreign values that should be subordinated to Swazi culture and tradition.

Swaziland’s common law prohibits sodomy, defined as same-sex sexual relations between men, although no sentence is specified for those found guilty of such an offence. On March 15, a man in Nhlangano (a town 130 kilometers south of the capital, Mbabane) murdered a lesbian after picking a fight with her at a bar and making homophobic comments. Police arrested a suspect, who was charged with murder and is currently on trial. Several months earlier, a gay man was killed for being gay in the same town in another apparent hate crime.

Neighboring South Africa and regional bodies–the Southern African Development Community (SADC) and the African Union (AU)–have done little to press Swaziland to improve respect for human rights. Instead, criticism has come from outside the continent.

In June 2014, United States President Barack Obama officially removed Swaziland from the list of African countries which benefit from the African Growth and Opportunity Act (AGOA), citing the slow pace of democratic reforms and poor human rights record. The International Labour Organization (ILO) in June 2015 called on the Swazi government to amend the Industrial Relations Act, the Public Order Act, and the Suppression of Terrorism Act, and guarantee labor rights. On July 10, 2014, the Commonwealth initiated political dialogue led by its Special Envoy to Swaziland, former Malawi president Bakili Muluzi, to move the country towards multi-party elections in 2018.

In May 2015, the European Parliament called on the government of Swaziland to immediately and unconditionally release Thulani Maseko and Bheki Makhubu,  and all prisoners of conscience and political prisoners, including Mario Masuku, president of the People’s United Democratic Movement, and Maxwell Dlamini, secretary-general of the Swaziland Youth Congress. It further urged Swazi authorities to take steps to respect and promote freedom of expression, guarantee democracy and plurality, and establish a legislative framework allowing the registration, operation, and full participation of political parties.